Museums Matter in the Current Climate of Anti-Black Racism

As a Black woman trained in bioanthropology and dedicated to a career trying to undo the residues of social Darwinism and anti-Black racism in museums, I’m concerned about the present state of popular discourse around Africa and Blackness—the bombardment of blatant and pseudoscientific racism, the rise of white nationalist violence around the preservation of confederate monuments, the president reducing the African diaspora to “shithole countries,” and Ann Coulter’s claims that “in the history of the world, there has never been a more pacific, less rapey creature than the white male of Western European descent.” An unfortunate legacy of nineteenth-century race science, Black people are continually bestialized in museums and popular culture, as evidenced by the relentless depiction of the Obamas as primates and Roseanne’s recent slur against Valerie Jarrett. But the painful rise of blatant racism in the current Trump climate has laid down the gauntlet for many of us. We are now at a moment where we must rethink the role of anthropology or anthropologists in the public sphere. As Decolonize this Place (DCP) activists have mobilized across the country to question racial practice and representation in museums, perhaps we do indeed need to take radical new steps to “decolonize” our museums.

After twenty years working on the racialized anthropological narratives stored in museums, I’m sensitive (or perhaps desensitized) to the deeply entrenched racism encoded in many museum exhibitions of Africa that have contributed to our cultural and ontological understandings of race and blackness. As Jennifer González’s powerful work has articulated, “The collection and display of African bodies, images, and artifacts—altogether/in confluence—[is] a primary means of which nature tells the story of its past and locates the cultures of its citizens in the present.” She further elaborates, “This is the reasoning that informed and allowed for practices of slavery… and that continues to perpetuate forms of social dominance and material disenfranchisement.”(2008) What residues of that racial hierarchy reside today in museums and the larger cultural matrix of which they are a part? How do we repair deeply entrenched representations of Black people as beasts, representations that shape policing and policies that affect Black people in the present and shape our possibilities in the future?

For many of us, the Black Panther global phenomenon helped ease the gloom of 2018 with its imaginings of an empowered Black future. It was particularly surprising for me to witness the legendary scene where a white museum curator of African art was confronted and challenged about the African objects on display. Clearly, the film’s finger was on the pulse, because 2018 also witnessed the seismic rise of Decolonize this Place. This was most noticeable in the backlash over the Brooklyn Museum of Art’s hiring of a white woman as consulting curator for African art. In an open letter to the Brooklyn Museum, cosigned by DCP on behalf of the various activist organizations that coalesced as a united front, the group demanded that the Brooklyn Museum form a “Decolonization Commission” that would help the institution address its “role in the histories of colonialism and white supremacy.”

The political climate at large and the urgings of DCP in particular trickled down to me from above. Before I began teaching at Bryn Mawr College in 2015, I worked at the American Museum of Natural History (AMNH) for ten years as head of cultural education. Recently, I was asked by museum leadership to help them address some of the public concerns about racially problematic exhibitions on display, most emblematically the large statue of Teddy Roosevelt on horseback flanked by a “Negro” and American “Indian.” On the last Columbus Day, or Indigenous Peoples Day, more than one thousand people came to AMNH to protest the culturally problematic symbols and practices they felt the museum embodied (see event flyer). Ahead of that, the Coalition released a list of demands via press release, requesting that elected officials remove the statue of Theodore Roosevelt outside the Museum. Once again, they also requested that the AMNH establish an independent Decolonization Commission to assess the impact of persistent racist stereotypes and demeaning representation of non-European people on display, arguing that the museum perpetuates outdated ethnographic curatorial practices within their collection that denigrate non-White and non-Western peoples.

During the Margaret Mead Film Festival held later that month, I returned to AMNH on a public tour—titled “Represent”—that set out to “explore the historical context of cultural exhibits and spark dialogue about representation, perspective, diversity, and inclusion.” It was a fraught honor to return to AMNH and give the types of public tours I always passionately wanted to do—one that openly acknowledges the racism that lives in the institution’s history as well as acknowledging my own conflicted roles as Black woman that has always, deeply loved the museum. In particular, I openly addressed the problematics of audiences moving from the statue of Teddy Roosevelt outside the Museum to the Akeley Hall of African Mammals (see photo), with its dramatic parade of African elephants and majestic dioramas of taxidermied African animals, to the Hall of African Peoples, bleak dioramas such as one of darkly-lit “Pygmies” in the rainforest. Egyptian pyramids are elevated to the MET across Central Park to share space with other great civilizations; but sub-Saharan African people are confined to the “Heart of Darkness” jungles and plains, alongside the great African animals. 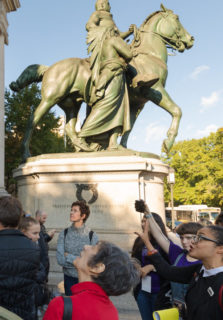 Museums must often communicate an imaginary Africa to audiences in the reductive synecdochic landscape of the museum exhibition. I have been challenged with this in my own role as curatorial advisor to the Penn Museum’s renovation of their permanent African gallery, an ambitious and daunting undertaking. I’ve often told my museum studies students that it is easier to critique than to construct, and that has certainly born out in this exhibition development process. The Curator of the new Penn Africa Galleries is the distinguished sociologist, Tukufu Zuberi, the Lasry Family Professor of Race Relations and Professor of Sociology and Africana Studies at Penn.

From the first moment Dr. Zuberi recruited me to the project, he spoke powerfully about his commitment to make this exhibition of Africa unlike any other. He was committed to probing the dark history of white colonization and putting that history on display. He also wanted to radically change negative perceptions of the continent and its people. In the museum world, this was revolutionary. It felt like a call to symbolic arms that could truly help to decolonize imaginings of Africa in the museum. Tukufu commented that Conrad’s Heart of Darkness made its philosophical mark on all the early African collections, and during my first summer of archival research, we actually found that mark. Buried deep in the archives of personal letters pertaining to the African collections, one of my students found a letter from a man who both was a patron of Joseph Conrad and donated African objects to the collection. These were the types of residues left on and in the objects we would display.

However, the process of radically reinventing the African collections for display tended to offer more challenges than solutions. How do you distill the continent of Africa into an exhibition, and one legible to sixth graders and college students? There is the sheer complexity of histories and present stories, the vast wealth of cultural productions and cultural dynamism, of political and economic and philosophical and gendered histories, not to mention the sheer size and scale of the continent and its people. It is clearly far more than can ever be encompassed in an exhibit on Africa. Imagine the challenges of doing an exhibition on any one African country or any one African artistic form (e.g., performance or poetry), and the challenge is massive. Responsibly representing the continent of Africa in 4,000 square feet is a challenge of epic proportions.

However, this challenge will continue to motivate me more than haunt me. Museum representations of Africa and anthropological representations of Black bodies matter, because Black lives matter. As long as Blackness is devalued and naturalized—whether in museums, in popular cultural, or on the streets of our cities, I have to think about where those ideas come from—how museums and anthropology helped construct that idea (these racial hierarchies with Blackness on the bottom) and how museums and anthropology can help deconstruct that idea.

Monique Scott is the Director of Museum Studies at Bryn Mawr College. She is the author of Rethinking Evolution in the Museum: Envisioning African Origins (2007), and is currently writing a book about the history of representing African art and artifacts in Philadelphia museums.