Nature at the Intersection

In today’s world, where the tentacles of science delve into our humanity in ways most of us could only imagine a generation ago, the space that falls at the intersection between the biological and social sciences has become more critical than ever to operationalize. Social scientists have long appreciated the role of the “social construct” as a tool to understanding the human experience and to recognize that the rules for life are not dichotomous, but rather just points along a continuum. My students have been savvy enough to question what facets of life are social constructs and what are biological realities, but today, more of us, students and scientists alike, are coming to realize that science creates parameters for explaining, while the social sciences give us the tools for understanding. 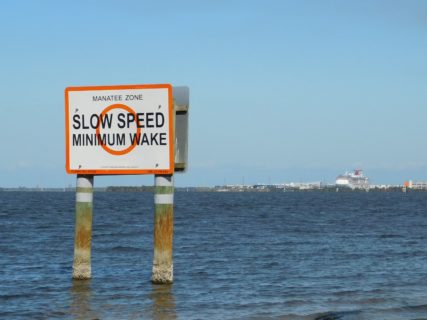 This sign suggests we have a willingness to change our behaviors for manatees.Barbara Jones

Since my area of “expertise” is as an environmental anthropologist, I come face to face with this reality whenever I speak with wildlife biologists, park rangers, or conservationists. To each, their understanding of the world is through the lens of science, yet even their science is defined by each scientist’s own humanness: What species get listed for endangered species protection? How do we describe animal behavior? What does it mean to be wild? These are just some of the questions scientists have to consider and answer in their professional lives. For each question, although the answers can be explained by biology, the interpretation tends to come through the lens of disciplines like anthropology or economics. Species tend to be listed as endangered because people think they are cute and charismatic or because a staff biologist has a passion for it. Animal behavior often is defined in anthropomorphic terms: a loon gets divorced, a wolf is brave, or a manatee lets humans “babysit” their young, while what it means to be wild nature depends on whether you are in New York’s Central Park or on Long Peak in Rocky Mountain National Park. In each of these examples, our human response to the science of nature or animal behavior plays a pivotal role in generating answers.

At the past two biennial science conferences (2016 and 2018) on the Greater Yellowstone Ecosystem (GYE) scientists and some social scientists were invited to “track the human footprint” and to “build on the past, and lead into the future to sustain the GYE in the coming century.” At both conferences scientists and social scientists spoke about current issues facing the GYE. In the 2016 conference specifically, many of the presentations dealt with how to convey scientific knowledge to the non-scientist; in other words, how can science be made relevant to those outside the canon. In the 2018 conference, the themes more extensively focused on the increasingly large human footprint in the GYE that is evincing itself through overcrowding at Yellowstone National Park’s (YNP) iconic sights, the encroachment of human development on wildlife corridors, and the loss of ranching as a way of life. In each instance, scientists are faced with a dilemma regarding how to protect both the region’s wild spaces and their wild occupants. Visitors at YNP have been known to “rescue” bison calves because they looked cold, get too close to dangerous wild animals for a “selfie,” or to urinate on Old Faithful because it has been done by others in the past. At both conferences the themes were initiated by park scientists and rangers, but solutions, in many instances, were offered through the lens of the social sciences. In 2016, storytelling was promoted by park rangers as a way to make wild nature’s needs something that remained with more visitors, while in 2018, a number of presentations focused on the economics of the growing human footprint. In both cases, the social sciences offered potential solutions to the challenges the GYE faces.

This shift from seeing nature as distinct from people to one that sees people as part of nature has moved the argument about “how bad development is for wildlife into a more fruitful dialogue about how good conservation is for human well-being.” It has put humans on the continuum of what it means to be part of nature. This change has given agency back to the non-scientist and allowed more of us to act as nature’s “citizen scientists.” Sefano Katz, a wildlife biologist for Pacific Blue Foundation who is now working in Fiji to help with reef preservation, believes that rather than deal with broad concepts like climate change, you need to help people understand the steps they can take on their own to solve local environmental problems. That approach makes conservation goals more relevant and achievable. In the October 28, 2018, the Travel section of the New York Times, Katz was quoted as saying, “People protect what they understand. That’s the way to make change.” Whether it is building reefs as part of a guest experience at an island hotel or documenting wolf activity in YNP as a regular “wolf watcher,” more people are accepting the mantel of citizen scientist and protector of our shared natural world.

For me then, my timing as a social scientist could not have been better for writing a book about nature’s wild capital (a handy title for my book, too: Wild Capital: Nature’s Economic and Ecological Wealth, University Press of Florida fall release). By tying nature’s presence to our well-being, people are more likely to change their behaviors and become better custodians of the natural world. Wildlife biologists can offer evidence aplenty about species preservation, but if we don’t see value in the presence of, for example, the manatee or prairie dog, the scientific explanation for conserving and protecting can fail to generate the necessary understanding for doing so. Since we share a critical spot on the continuum of wild to urban, without human buy-in that comes from creating a shared understanding of nature’s intrinsic and extrinsic worth, the cost or inconvenience of preserving species like the prairie dog or manatee might be perceived as more than the benefits of their continued existence.