Silicon Valley’s workers must maneuver their way through this place of diversity and discrimination, capitalist aims, and countercultural aspirations. 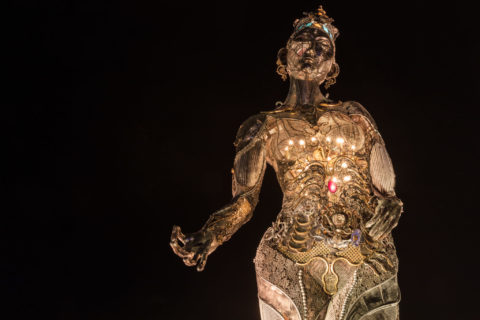 Burning Man artist Dana Albany’s Tara Mechani is temporarily installed next to The Tech Museum of Innovation in San Jose, as a piece of public art. Built from tiny pieces of hardware, this Tibetan bodhisattva represents the virtues of success in work and achievements. Duncan Rawlinson/Flickr (CC BY-NC 2.0)

You can spot the extremes on the street in Silicon Valley. You can find monumental architecture and tour “the mothership,” a gigantic circular edifice that is the home to the Apple headquarters. You might spot a few autonomous vehicles, piloted by a host of competing companies, especially Waymo, a subsidiary of Google’s parent company, Alphabet. You might, if you were to walk through the public squares at dawn, need to navigate around the sleeping homeless. Half of the world’s 143 technology-fueled billionaires live here (Schleifer 2018), but mere millionaires are not even sure they are middle class in Silicon Valley. In San Francisco and San Mateo and Marin counties, a family of four earning less than $117,000 a year is considered “low-income” (Robertson 2018). Teachers, nurses, and others who would be considered middle class elsewhere commute from the distant Central Valley or Salinas to the south. The struggle of people on minimum wage is intense. Janitors and gardeners live in overcrowded apartments or commute from long distances. In the predawn hours a Greyhound bus from the agricultural Monterey County to the south will be filled with sleeping workers on their way to their minimum-wage jobs in San José.

Silicon Valley’s story is a tale of two contradictions. It is a place of deep diversity and divisive discrimination, of countercultural aspirations and unabashed capitalism.

Native-born workers and their families are leaving the region at the highest numbers in the country (Robertson 2018), yet the population of the area continues to grow as immigrants come to the Valley for work. Some of these immigrants are completely perplexed by the conspicuousness and tenacity of the inequality. Isabella, a European sojourner who directs an international corporate outpost, finds it difficult to reconcile the gap she experiences every day as she walks to work. She told me,

I can’t understand it and I feel like everybody’s just coming up with excuses. “These people want to live in the streets.” That’s my favorite answer. I’m like, “No. Have you ever slept on the street? Just like one night?” I did…Nobody wants to live on the street, nobody.

In the middle and upper-middle classes that comprise most of the tech and white-collar workers in Silicon Valley, inequality fades into the background. Jennifer, an instructional designer and trainer told me how she and her colleagues went to the theme park, Great America, and interacted with the “lower classes,” reflecting that she is in a kind of ivory tower on her tech campus. Jennifer can see homeless people from the train as she goes to work, but it’s easy to feel insulated from that reality.

The inequalities of Silicon Valley are not just economic, but are situated in a global landscape of biases, reflecting an array of beliefs about gender, class, and race. This bricolage of discrimination plays out in the networks of tech workers.

While high-profile cases of elite gender or racial discrimination at places such as Facebook, Twitter, and Uber are profiled in the media, the larger story of regional diversity is often left underexplored. Nearly two-fifths of the region’s population is native to a nation other than the United States and more than 70 percent of Silicon Valley’s technology workforce is foreign born. Such diversity reshapes how people live their lives and how they interact with work. The workplace is one platform for this interaction, but so are schools, grocery stores, and even quidditch fields. Dozens of languages are spoken in households ranging from Spanish to Marshallese. Even using such crude measurements as language or place of origin, people identify with at least 50 different cultures (English-Lueck 2017).

Realistically, people operate in a much more nuanced field of self-identification and impose self-constraints on their interactions, but that still means that people cannot accurately predict the way in which their interactions with other people will unfold. Their culturally shaped expectations of gendered behavior, timeliness, and the importance of being right at work are more likely violated than met. Carl, an engineer whose work required that he work with immigrants and sojourners from India, reflected on how each team he worked with imposed notions of hierarchy differently. Since his job involved localizing network systems to India, he did not dare indulge his own or others’ ethnocentric impulses. He noted that

dealing with the variety of people, all the cultural issues, it is impossible to know enough of the cultural issues to not step on toes. So the solution seems to be for people to get used to wearing steel-toed shoes. People are getting…more tolerant (English-Lueck 2017, 164).

Under such circumstances, each performance review can hold a potential cultural grenade.

Clifford Geertz speculated about such deep diversity, imagining complex sets of interactions across meaningful cultural differences, and he wondered if it were possible to create communities under such circumstances (Geertz 2000, 86, 224). The people who live and work in Silicon Valley, must navigate such diversity each time they step into a work meeting or go to their child’s school for events. Ironically, while the frictionless, efficient future promised by technology can obscure cultural differences, those underlying diverse perspectives do not disappear. Tolerance can be one pragmatic tool people use to navigate difference, but social practices of overt tolerance are only part of the story. A discourse of tolerance can also conceal underlying gender, age, and racial discrimination. And, when the primary motivation for tolerance is self-interest, tolerance is reserved for the potentially powerful. A future potential supervisor should be treated well, but what of those who are not likely to be in a position of power? In such relationships being marginal is a liability, whether the person is a woman, African American, or pushing 60.

For the last quarter century, social scientists have been captivated by the idea that Silicon Valley’s regional advantage was in its ability to leverage networks. Other more conventional centers of technology fostered organizations that were self-contained and secretive. In Silicon Valley networks of coworkers shared tidbits of information, making them more socially mobile, adaptable, and able to take advantage of opportunities around them. As immigrants leveraged their own global connections, these networks expanded to include other tech centers in India, Greater China, Israel, and European wellsprings of talent (Saxenian 1999).

It is no accident that twenty-first-century social networking platforms amplified the power of this egocentric connectivity. Networks are at the heart of how Silicon Valley’s people function, whether they use them to get intelligence on potential childcare or to find a solution to a knotty technical problem at work. However, the underside of this apparently infinitely adaptable social structure is that people’s networks flow along the course of least resistance. A male engineer, whatever his culture of origin, will gather to him more male engineers, preferably those who speak the same language, laugh at the same jokes, and like the same foods. This social force drives a network homogeneity that runs counter to the reality of diverse workscapes. The contradiction between apparent diversity and limited access to opportunity is at the heart of why corporate leaders in an apparently progressive and hypervigilant landscape can still be surprised by acts of discrimination. “Bro culture” is not the best mindset for navigating deep diversity, and counteracting it takes active effort whether in work teams or board rooms. Efforts to counteract those protected networks do exist. Taavi, an engineer at an innovative social media company volunteers her time, with company support, in Black Girls Code. This nonprofit is headquartered in Oakland and works to disrupt the traditional engineering pipeline and create new networks of STEM education and employment.

Silicon Valley is an icon of late capitalist entrepreneurial success in the public imagination, inextricably intertwined with technology—its inception, development, production, and use. To be sure, every major freeway or expressway will take you by company names you would recognize: Apple, Google, Adobe, Facebook, Hewlett-Packard, Cisco, and Mozilla. If you include what is now being called Greater Silicon Valley—San Francisco and Oakland—you can add Twitter, Pinterest, and Pixar. The pursuit of profit is certainly the mainstay of the technological economy, but in the Greater Silicon Valley, other subtle cultural forces are also at play. The Bay Area is heir to a countercultural legacy that deliberately sought to exchange ideas and practices with global sojourners to reinvent cuisines, spiritual practices, and wellness routines. These values are important to and inspiration for the evolution of the technology of the region. The innovators of the 1960s and 1970s who laid the foundations for personal computers and the ancestral internet were fascinated with individual augmentation and the possibility of overcoming geographic parochialism. This generation of technologists brought yoga, ethnic and vegetarian cuisines, and a disdain for hierarchy into their start-ups and workplaces. The traditions belonging to an influx of global immigrants blended with older cultural appropriations to create a cosmopolitan counterculture. In the 1990s, software engineers would tell me how they were fueled by the potential for “connection” and “community” that their devices might bring. Like Apple’s Steve Jobs, a generation of entrepreneurs, and those they trained, hammered at the boundaries of art and science. Their legacy is an enduring fascination with elegant design and technological disruption. It is not enough to make incremental changes; good technologies upend the old patterns of thinking.

The origin story of “Silicon Valley” is one of creative destruction. Transistors gave way to integrated circuits, which were repurposed into personal computers, in turn to be economically supplanted by the internet and then by mobile applications. In this narrative, each new revolution must give way to the next, coincidentally fueling Silicon Valley’s economy and keeping the workforce around during the periodic recessions. This melding of counterculture and capitalism is the second apparent contradiction that fuels the Valley—one that appears in the mission statement of organizations and corporate café conversations. The latest technological promise is in the ubiquitous Internet of Things, embedding the internet in everyday objects to regulate the devices and communicate between them. This vast array of objects includes sharable autonomous vehicles, alternative energy grids, and wearable wellness devices. It is worth noting that the countercultural values of sharing, alternative and efficient living, and self-augmentation are also built into these devices. The beat goes on.

Silicon Valley is not just an experiment in technological innovation and immersion, but in managing social complexity. Social problems, however, are not as easily solved as technical ones. Corporate leaders, civic entrepreneurs, and social activists all struggle to navigate and manage the contradictions that face them at the heart of Silicon Valley life.

J. A. English-Lueck is professor of anthropology at San Jose State University and a Distinguished Fellow at the Institute for the Future. English-Lueck is the author of four ethnographies about Silicon Valley including [email protected], now in the second edition, which explore the way in which work reframes regional life.