Reflections on a 30-year trajectory with feminist anthropology.

Former Association for Feminist Anthropology (AFA) contributing editor Megan Steffen sat down with Nicole Constable, AFA member and professor and chair of the Department of Anthropology at the University of Pittsburgh to chat about her trajectory as a feminist anthropologist. Below we share excerpts from that conversation.

For more than 30 years, Nicole Constable has engaged with feminist anthropology as a researcher, teacher, and administrator. In addition to her appointment as a professor in the Department of Anthropology, Nicole Constable served as dean of graduate studies at the University of Pittsburgh (Pitt) for six years and is affiliated with the Gender, Sexuality, and Women’s Studies Program and with the Asian Studies Center, of which she is a former director. She has “always been a feminist,” as she does not see “a sharp division between who you are as a person and your academic focus. I think they all go together all the time.” When she first arrived to work at Pitt in the early 1990s after completing her PhD at the University of California, Berkeley, she was one of only two women to have ever been on the tenure track in a department of 20 people: “There’d been women who’d been non-tenure track but there’d never been two women who were tenured at the same time. Then the one woman who had been tenured left to do administration when I was tenured. We were said to be cursed,” and she adds, “Having departments where the faculty were all men got old fast. People kept saying ‘Oh well, they’ll retire,’ but it sometimes takes people a long time to retire.”

A woman with grey hair tied up and wearing dark blue rimmed glasses and a grey sweater smiles at the camera.
Credit: Nicole Constable 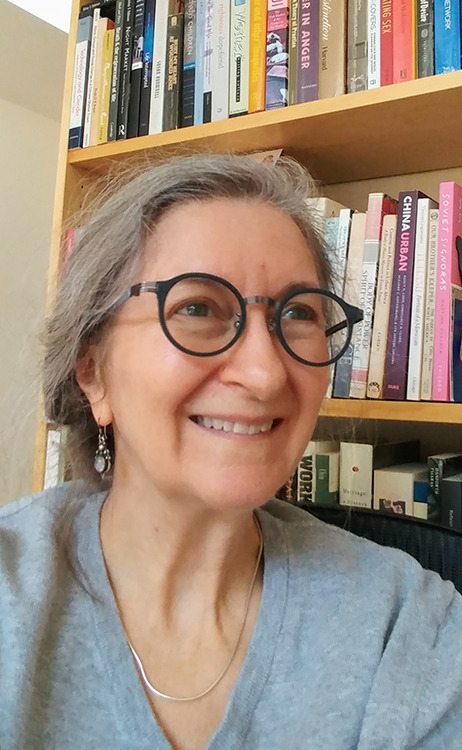 Her experiences as a faculty member and administrator speak to the challenges of navigating male-dominated spaces in academia and of carving out spaces for women:

I just feel like I have a kind of an ethnographic and feminist view of the world. I would go into this anthro-ethnography mode when I would go to meetings, some of which were with people who were my seniors, including deans above me, and almost all men. A lot of the meetings were irritating, and I would switch into “anthro mode” and do a more critical observation to avoid feeling dragged down by it. It’s a good survival tactic, especially in the meetings when I’d be in a room full of men and I’d say something and they would ignore it, and then a man would say it later and suddenly it’s brilliant. You just have to distance yourself. As a white woman in that era where I could make a difference, I was in a very privileged position. The work of diversifying has been where I’ve put a lot of effort; it has been my main goal as chair. I’ve always been working for change. At my university, we now have a woman dean of arts and sciences, a woman provost, a woman who is dean of the School of Education, and that was unimaginable 20 years ago. It will be nice when we no longer have to count it and point it out. The changes will continue to move in the direction of permitting and respecting all kinds of differences, and we’ll see it at every level of academia.

Her intellectual engagement with feminist anthropology starts with the work on feminist ethnography:

The work from my earlier years that I found most influential is the feminist ethnography from the 1980s, such as Lila Abu Lughod’s work, Kamala Visweswaran’s work, and Judith Stacey’s work in sociology. They grapple with the question of whether there can be a feminist ethnography; I kept that question on my mind and in the back of my mind for my entire career. Feminist ethnography has to do with how to do responsible ethnography, as increasingly my work came to be about migrant women, their politics, their lives, and their views. As they became increasingly outspoken about their rights, their desires, and their interests, I kept thinking about representation and responsibility. The critiques of some second wave feminism and the idea that feminism isn’t just one thing, Donna Haraway’s idea of situated knowledge, Chandra Mohanty’s work, Uma Narayan’s work—all of that went into my DNA early on.

As a scholar, she has

always liked topics that are on the margins, and on the margins of the margins. My dissertation project was about Chinese Christians in Hong Kong and my work after that has been related to gender, intimacy, care, and migration. I have worked with migrant women, migrant workers, and migrant mothers, as well as women asylum seekers. I have worked mostly with women, but I’ve paid close attention to masculinity and men as well. One thing I learned from my first project was to follow my passion. In the first project, even though I took it very seriously, it felt a bit like pulling teeth to get people to talk. It didn’t have a public aspect to it except for church on Sundays and that wasn’t very exciting to me. I wanted my next project to be one with a public component and one where people would be eager to talk to me. At that time, I was just starting to notice migrant workers and they were very willing to talk to me—I just had to sit in the park and they’d approach me. So, my next project, which culminated in the book Maid to Order in Hong Kong, just wrote itself—it just happened. But I guess my most explicitly feminist engagement in a more subtle way is when I did the ethnography on cross-border marriages or so-called mail order brides, Romance on a Global Stage. That got me thinking “I’m not that kind of feminist”— I had to confront different feminisms in that project. That is the book in which I most engaged with feminist debates. When I started doing that project with men and women who were meeting through correspondence, I went through a lot of ups and downs because the men were nervous about how they’d be represented. I learned a lot about being critical in terms of digging deep and understanding, but not having to accept their views. Like Jennifer Patico describes in her piece on “awkward sincerity,” the men had a lot of ideas about those feminists who are critical of them and who are out to get them—and it’s true, there are groups who are critical of them. But before the book even came out, a couple of people had written on Amazon, “Another feminist against the International Marriage Broker Regulation Act,” just trashing the book without even reading it. I kind of loved that because it proved what I was writing about: people had their minds set on the issue without having even examined it. I’ve always loved looking into stereotypes and seeing where they’re wrong.

My new project is about surveillance, care, and control, and about the problems created by new biometric passports issued to Indonesian migrant workers by the Indonesian consulate in Hong Kong. I’m very interested in the entanglements of care and control and how surveillance can have good and not so good implications for people, especially migrant workers. In Passport Entanglements I consider how binaries are related to passports: rethinking the ethnographer/research subject binary, rethinking the state/society binary, rethinking the care/ control binary, the fake/real binary in terms of identity. It’s not like people haven’t criticized binaries already, but I’m trying to do it as part of an epistemological approach that shows how they are intertwined and entangled. Care and control are not two sides of a coin, they’re entangled. Having done fieldwork in Hong Kong since the 80s I’m entangled too, with my various interlocutors—consular officials, activists, migrant workers and leaders—who are also doing research. They forced me to see things as not simply “for or against” or “if you’re not with us you’re against us.”

At the center of the project are the problems created by the new passports. Many Indonesian women have inconsistencies in their names or birthdates, so many were forced to return home and some ended up in jail. Activist domestic workers were amazing in advising women with passport problems. I sometimes felt uncomfortable about working with government officials as well as activists and so-called passport victims but the migrant workers weren’t uncomfortable about it; they expected it from me as a researcher. They explained that they aren’t taking sides, even when they’re critical, they’re not trying to demonize the consulate; they’re trying to get them to change their policies. Rethinking the “for or against” binary that is so popular in the US right now, made me rethink all my assumptions.

I’ve seen over the decades the meaning of feminism change, and the likelihood of people saying they’re feminists changing too. I teach courses on writing culture, the poetics and politics of ethnography, and at the graduate level I always include a history of ethnography, as well as a lot of feminist theory, history, criticisms, and disagreements. My courses on gender in East Asia increasingly deal with LGBTQI issues that young people can relate to. The #MeToo movement has had a huge impact on young people identifying as feminists. I taught gender classes for years in the United States, and American students never initially identified themselves as feminists. Then in 2015 I taught in Singapore, and I was shocked—everyone in my gender class, all but two introduced themselves in the first meeting as feminists. The combination of anthropology and feminism today is something that allows for more than intersectionality and more than appreciation of diversity. Feminist anthropology is now also attentive to the fluidity of sex and gender identities and multiple and fluid identities cross-culturally, and with more complex and entangled notions of power.

Megan Steffen is a former section contributing editor for the Association for Feminist Anthropology.

Nicole Constable received her PhD from the University of California, Berkeley in 1989. She is a sociocultural anthropologist whose primary research focus is gendered migration in and from Asia. She is also very interested in different modes of ethnographic and anthropological writing. Her main geographical research areas are Hong Kong, China, the Philippines, Indonesia, and Singapore. Her new book, Passport Entanglements: Protection, Care and Precarious Migration is forthcoming with the University of California Press.