No one was sure what form carnival would take in New Orleans in 2021. Mardi Gras 2020 had proven to be a COVID-19 super-spreader event, and many of the social clubs called “krewes” that organize carnival parades and parties canceled their plans, anticipating that public gatherings would still be forbidden. The day the mayor officially banned parades, November 17, 2020, someone made a joke on Twitter: “It’s decided. We’re doing this. Turn your house into a float and throw all the beads from your attic at your neighbors walking by. #mardigras2021.”

The tweet went viral, and the tweeter, Megan Boudreaux, who usually parades in the sci-fi-themed Intergalactic Krewe of Chewbacchus, suddenly found herself at the helm of the new Krewe of House Floats. Various ideas for alternative, safely distanced carnival celebrations had been floated, but this one really captured New Orleanians’ imaginations. House floats were a pragmatic, inventive play on the form of carnival, and the perfect outlet for the creative energy that people usually put into making the material culture of carnival.

By Mardi Gras day, three months later, over 3,000 house floats had popped up around the city. I watched them blossom from a distance as COVID-19 regulations kept me at home in Nova Scotia. I scoured social media and news media, Zoomed with research participants, and followed photographers―including Ryan Hodgson-Rigsbee, who I had worked with already―to find out how people were playing with carnival to create this novel form of public culture.

A large shrub in front of a pair of semi-detached single-story homes is trimmed to the shape of a head, decorated with a tie-dyed fabric headband, and sunglasses, a nose, and a mouth made of cardboard. A peace sign and a heart are on the left and right of the heard. A banner hangs on the railings in front of the houses with the words “MARDI GRAS,” a fleur-de-lis and many smaller stickers and slogans. The main colors of the decorations are green, gold, and purple.
Credit: Ryan Hodgson-Rigsbee 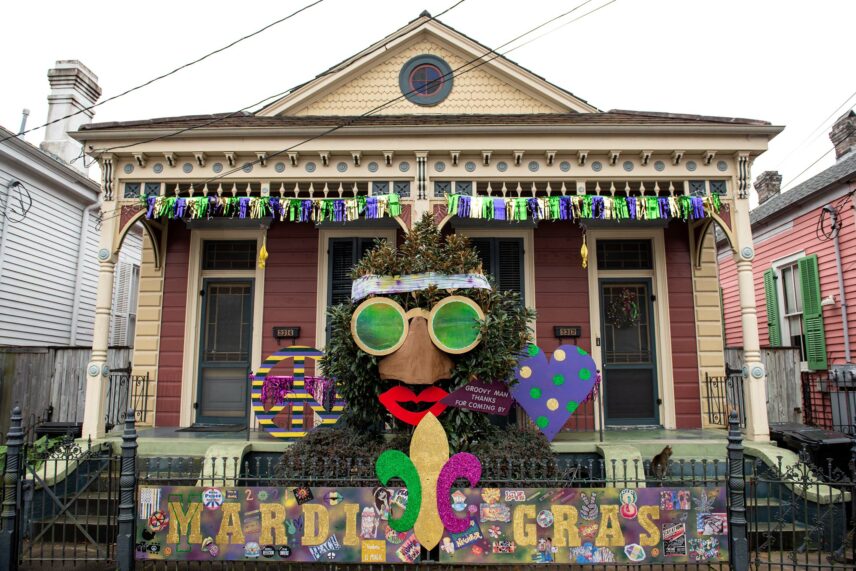 A two-story white house with blue trim, with a big porch and balcony, is decorated with big models and pictures of foods, including a taco, a slice of pizza, a bag of popcorn, an icecream cone, french fries, and lollipops. On the white picket fence in front of the house hangs a string of colored lights with soda cans attached. A banner at the top of the porch reads “SNACKING IN PLACE.”
Credit: Ryan Hodgson-Rigsbee 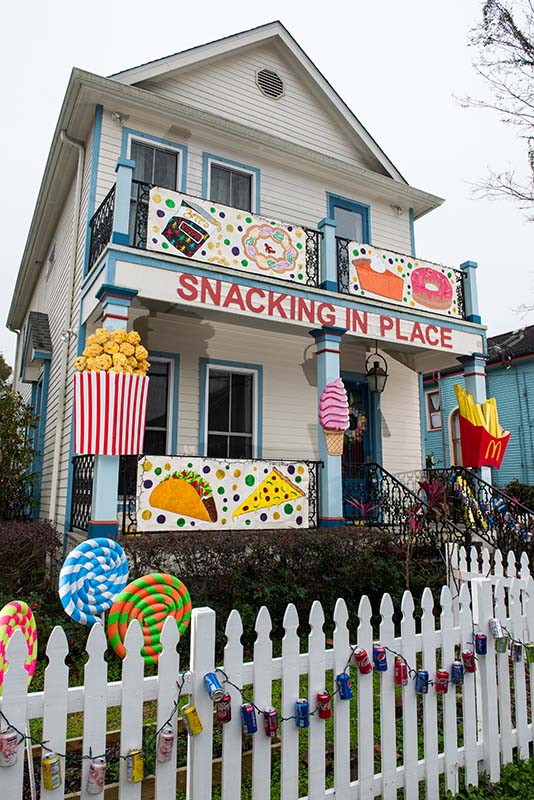 The lawn in front of a large single-story home is decorated to represent a Mardi Gras parade scene. On the lawn is a small carnival float and a porta-potty with a mannequin waiting in line. Four parade spectators made out of stuffed clothes are leaning on metal street barriers, with a folding chair, a portable grill, and a cooler next to them and trash scattered behind them. The dominant colors of the decorations are green, gold, purple, and white.
Credit: Ryan Hodgson-Rigsbee 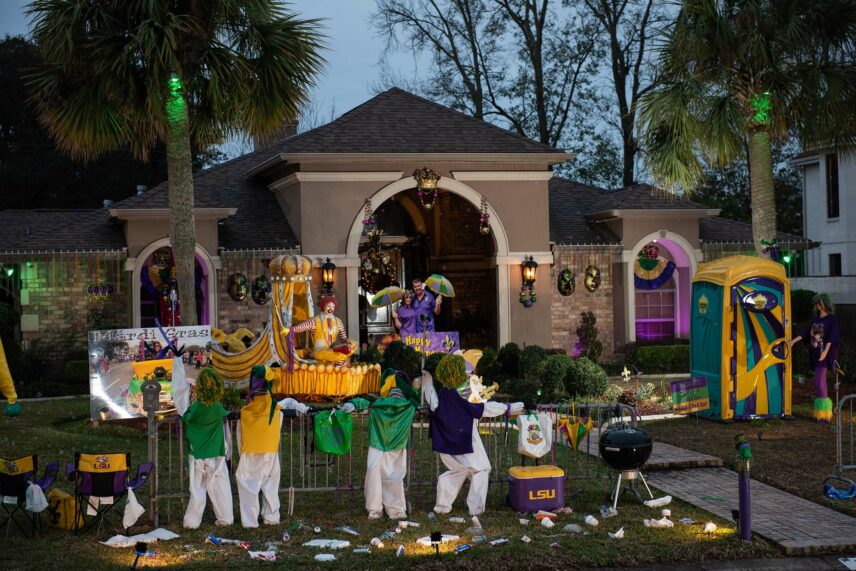 Play is always embedded in its social context, so just like carnival in non-pandemic times, house floats reflected uneven access to materials, labor, and know-how. Wealthier people could afford to pay artists or rent props from professional float-building companies to create their house floats. Caroline Thomas, a float designer, and Devin DeWulf, captain of the Krewe of Red Beans, launched the ingenious “Hire a Mardi Gras Artist” initiative, which crowdfunded employment for float builders and raffled off a house float each time the fund reached $15,000. In this way, people with less money had a chance of winning a top-quality transformation of their home, while laid-off artists had work for the season. Many more house floats, though, were created by their households along with friends and family, with whatever materials they had to hand. Residents of a “double shotgun” house (two narrow houses sharing a central wall and front porch) trimmed a shrub into a hippie figure in a tie-dyed headband for their “Peace, Love, and Mardi Gras” float, demonstrating how well traditional New Orleans architecture suited the house float form.

House floats featured less political satire than many carnival parades, perhaps because makers had to live with their float for weeks instead of hours. Some gently poked fun at the pandemic or at carnival itself, like the green, gold, and purple parody of a parade at a suburban home, complete with porta-potty. Some were simply whimsical. Many paid tribute to beloved local cultural icons, including jazz, oysters, the late chef Leah Chase, or the late musician Dr. John. House floats were typically funny, sweet, and sincere, showcasing what New Orleanians loved and missed about their city as COVID-19 quieted carnival.

The porch in front of a small white house is decorated with hand-painted cardboard cutouts of several brightly colored llamas and alpacas. There are many hand-painted signs. The biggest one says “LlamaRama.” The others say: “Llama Queen,” “More Llama Less Drama,” “¡¡Cuidado, Llamas!!,” “The Alpaca-lips is Nigh!!,” “Llamaste,” “Spitting Image,” “Save Da Drama Fo Yo Llama,” “Be Llama or Leave,” “Ill-Llama-Naughty,” “No ProbLlama,” “Llama Love,” “Floof Gang,” and “WARNING! Llamas Can Spit 15 Feet.”
Credit: Ryan Hodgson-Rigsbee 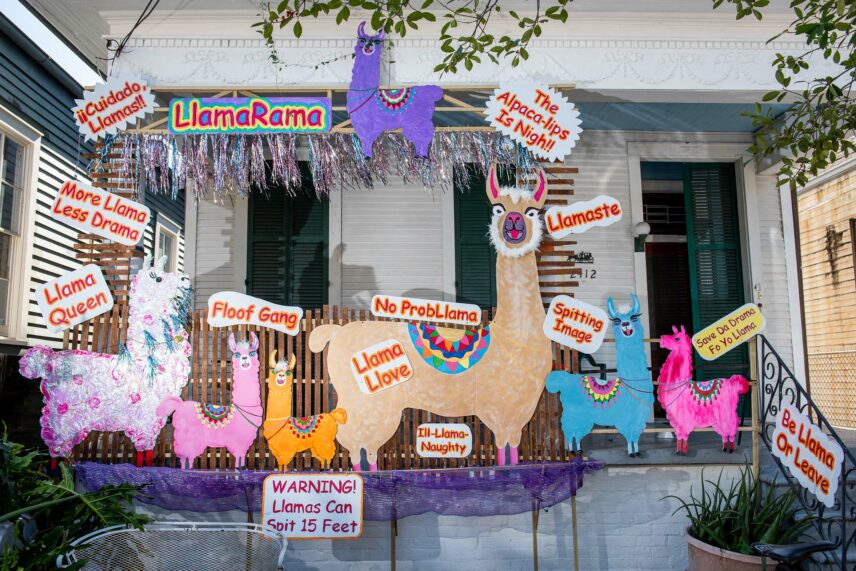 The photo is taken from one end of a porch, looking along the front of a house. Four people wearing paint-splattered clothes and face coverings are standing on or in front of the porch facing the in-progress house float. Float builder Caroline Thomas is among them, with her right arm outstretched. A large papier-mâché skull in relief, painted in yellow and purple, hangs on the front of the house. A small sign waiting to be hung up reads “House #1, The Night Tripper,” the name of an album by late New Orleans musician Dr. John. A mural of Dr. John is painted on a house across the street in the background.
Credit: Ryan Hodgson-Rigsbee 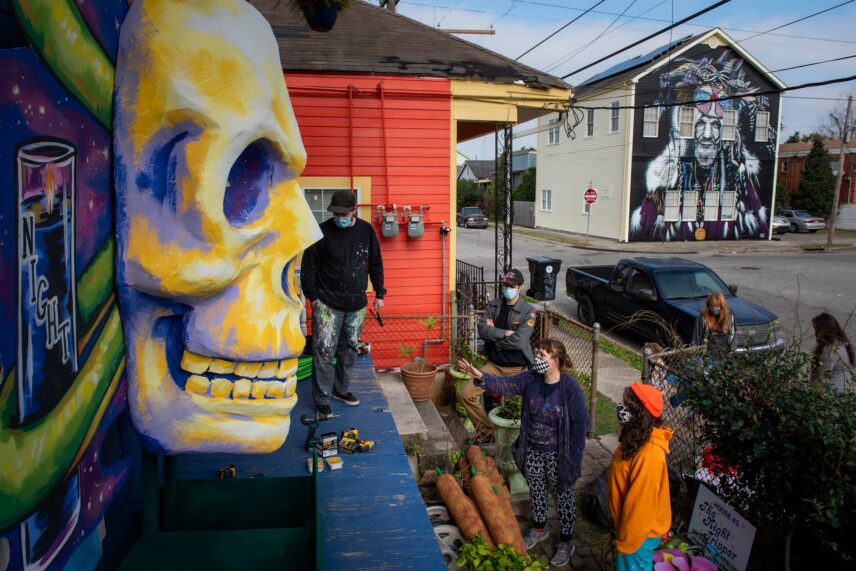 A large papier-mâché skull hangs between the two front doors of a double shotgun (semi-detached, single-story) house. 3D cardboard flowers are hanging on the two front doors. Snakes writhe around the skull, and two more snakes decorate the top edge of the porch. The picture is taken at night and the fluorescent colors of the decorations glow under ultraviolet light. Signs on the railings in front read, “The People are King,” “Hire a Mardi Gras Artist,” and “House #1, The Night Tripper” (the name of an album by late New Orleans musician Dr. John).
Credit: Ryan Hodgson-Rigsbee 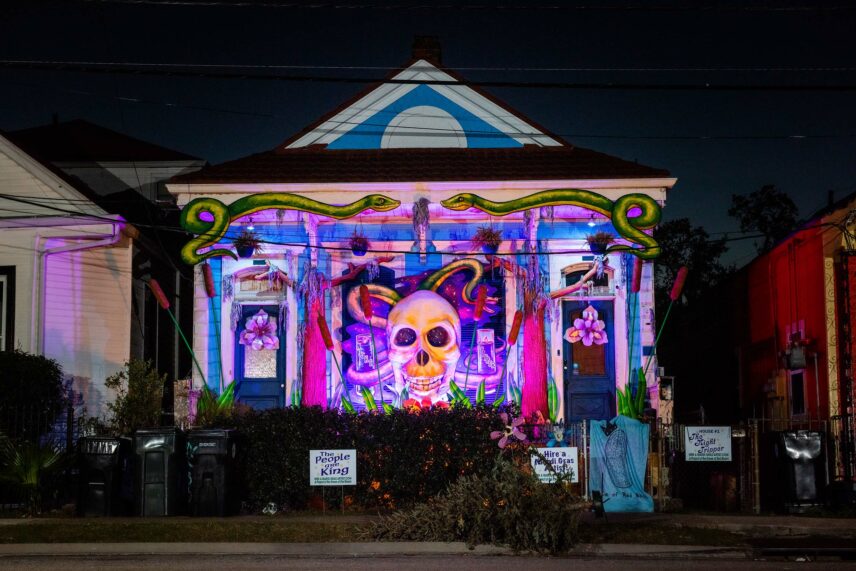 House floats also resituated carnival in neighborhood space and sociality, temporarily reversing the centralization that City Hall has increasingly imposed on carnival parades. Neighborhood subkrewes branched off within the Krewe of House Floats, organized via Facebook groups. The St. Roch neighborhood chose as their theme “St. Roch and Roll,” which suited the Société des Champs Elysée, a small carnival krewe whose theme for 2021 was already “We are the Champions.” Their house float, designed by artist Miz Marrus and built at their captain David Roe’s home on Elysian Fields Avenue, became a spot to stop for a drink and distanced socializing some nights. Symbolically, house floats echoed the open house parties that many New Orleanians host during carnival season, especially if they live near parade routes. In 2021, the invitations were not to come play at particular homes but at homes in general—at a safe distance.

Carnival season in New Orleans is always a playful time. People play with words as they come up with themes for parades, floats, and costumes. They play with materials and crafting skills as they make these things. They play with personae and hedonic pleasures as they participate in the parades and parties that culminate in Mardi Gras day. Because carnival is remade every year, by people responding to the materials and events around them, improvisation and resourcefulness are built into its social structure. This, I think, is what enabled the playful reconfiguration of carnival as “Yardi Gras” in 2021.

No one was sure whether house floats would feature in carnival 2022. Ultimately, few were built, as people returned to the familiar rhythms of mobile parades. The traces of house floats still glow in people’s memories and in the remarkable collective documentation of this play on carnival for pandemic times. 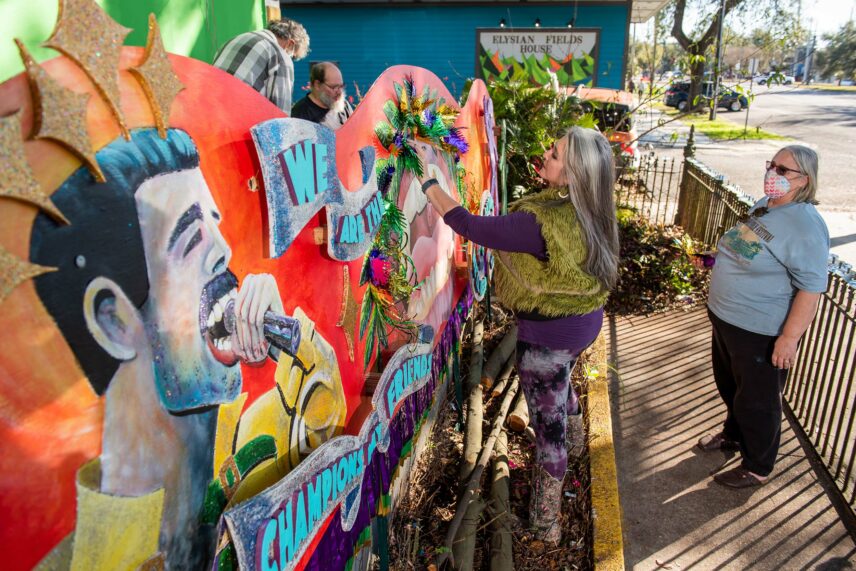 A white shotgun house fills the photo. Its porch is decorated with a large colorful panel featuring, on the left, a portrait of Freddie Mercury (from the group Queen) singing and, in the middle, a large open singing mouth. The song lyrics “WE ARE THE CHAMPIONS MY FRIENDS – WE’LL KEEP ON FIGHTING TIL THE END” scroll around the mouth. The silhouettes of two dancers are on the right of the panel. The photo is taken at night, and the panel and the porch are brightly lit.
Credit: Ryan Hodgson-Rigsbee 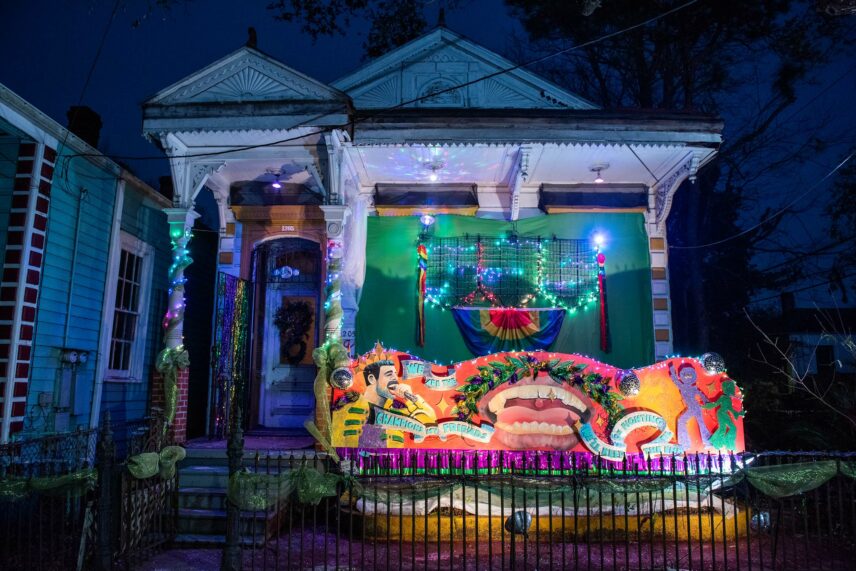 Ryan Hodgson-Rigsbee has been documenting New Orleans for over a decade. His photojournalism has been published in venues including the New York Times, Conde Nast Traveler, New Orleans Advocate, and Bitter Southerner, and he collaborates with numerous New Orleans nonprofits and artists, aiming to reach the public with photography that is both compelling and culturally responsible. rhrphoto.com

Martha Radice is a social anthropologist whose work focuses on the social, spatial, and cultural dynamics of cities. Her current Social Sciences and Humanities Research Council (SSHRC)-funded research explores the sociability, materiality, and politics of carnival in New Orleans. She is associate professor in the Department of Sociology and Social Anthropology, Dalhousie University.