Parasite-Host relations are asymmetrical. But what forms of parasitism has global health inherited? How to metabolize this relationship?

While conducting fieldwork in Peru, I travelled north to visit “The Pig People.” Farmers in the region attributed this colloquial appellation to the team of global health researchers who had taken up residence in their villages to control the transmission of a zoonotic parasite, Taenia Solium. T. Solium is an intestinal tapeworm that traverses the viscera of humans and pigs. The tapeworm larvae infect pigs and form cysts in their flesh (a condition known as cysticercosis). When humans consume the infected pork, the cysts travel through the human’s digestive system and attach to the small intestine, where they mature into an adult tapeworm (a condition known as taeniasis). The tapeworm can live undetected for approximately 25 years, grow to several feet in length, and produce on a daily basis tens of thousands of embryonated eggs, which are shed into the environment whenever an infected host defecates. When a coprophilic pig ingests the larval eggs, they metamorphosize into infective cysts again in the body of the pig.

Most human inhabitants in the region are farmers or families who engage in the small-scale rearing of cattle, pigs, and chickens. Pigs are allowed to roam semi-freely, often for weeks or months beyond their pens. They find ways to nourish themselves by scavenging through trash piles and grazing dusty roads, sniffing for food amidst the litter. Further into the hills, they often amble, eating scraps along well-trodden paths, drinking from fresh water streams. Occasionally they happen upon delicious feces left in the grass by farmers who, far away from latrines, are busily at work in the nearby fields. Taken together, these carnal practices—open defecation, pigs’ predilections for human feces, and humans’ appetite for pork (carne)—mount to a stabilized multispecies ecosystem that permits the parasite to thrive.

A terrible problem arises when the parasite infects the human brain and not their digestive tract. This condition is known as neurocysticercosis, and it manifests in epileptic seizures and other neurological syndromes that are possible to prevent from a public health standpoint. The Pig People were therefore in the region to educate village residents about neurocysticercosis and to facilitate “sustainable community-led surveillance strategies” that would capacitate local farmers to detect parasitic infections in their pigs. Implicit to The Pig People’s intervention was a belief that neither the expertise nor the agency needed to identify and respond to cysticercosis belonged to research scientists and public health officials alone: surveillance techniques could and should be shared with those most affected by the parasite—here, the farmers in relation to their pigs.

A woman stands outside holding a large white bucket. A number of pigs stand in front of her, looking at her. Beyond them, a structure of wood and metal can be seen, as well as trees.
Credit: Melissa Salm 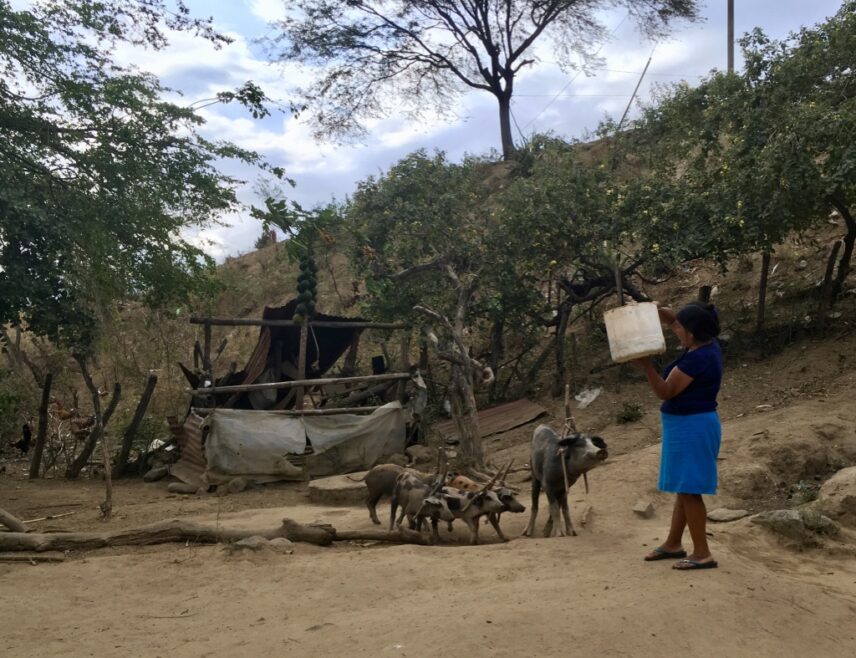 One of The Pig People’s primary goals was to teach farmers how to identify infected pigs via a tongue-examination. Interestingly, the tongue-examination technique had originally been developed several decades prior by farmers in a different region of Peru to evaluate which of their pigs were most likely to pass inspection at the slaughterhouse before being cut open and possibly confiscated by regulatory officials. If any of their pigs were grossly infected with tapeworm cysts (quistes), it was likely that some of the quistes would be visible as white-ish lumps on their tongues. It wasn’t until 1990 that epidemiologists first published reports describing peasant farmer’s informal use of this technique, which has since become a standard diagnostic field method in cysticercosis epidemiology. It is in this repackaged form—standardized, medicalized, recast in a technical idiom—that The Pig People were teaching this tongue-examination technique to the region’s farmers, who may or may not have had acquired this knowledge otherwise.

One afternoon, I accompanied The Pig People to a special sort of instructional workshop (taller), which had been described to me as “aprendiendo haciendo” or “learning by doing.” In this taller, The Pig People would teach members of the municipal health center about the etiology of the parasite by slaughtering an infected pig and then staging an interactive necropsy. The participants would search the infected pig’s flesh for cysts (metacestodes), surgically remove them, evaginate said cysts, and then watch a cyst transform into a tapeworm (cestode) under the lens of a microscope. (To evaginate a cyst in vitro means to artificially induce a progression of the T. Solium from its larval state towards its adult form as tapeworm. This process involves the use of bile salts, which turn the cyst inside-out so that, under a microscope, one could see how the cyst seamlessly metamorphosizes into a young adult intestinal tapeworm.)

The Pig People believed this taller would be crucial for the success of their interventions , in large part because they encountered resistance among farmers who insisted that cysticercosis and neurocysticercosis were not caused by parasites entering human and pig bodies, but transmitted “por raza”, that is, alone lines of genetic inheritance. “The key part is getting people to realize there are microscopic eggs (that no one can see) in their poop, and that the pigs are eating this, and that they (the humans) are eating this, and that this is what is causing the epilepsy.”

One afternoon, a facilitadora (community member who volunteered to facilitate dialogue between The Pig People and the farming communities) from a small village alerted the team that she believed she had identified one of her pigs’ tongues as infected. We drove to her home and a negotiation transpired. The facilitadora agreed to donate her pig for The Pig People’s taller in exchange for two large bags of feed—enough to nourish her other healthy pigs for the rest of the month.

On the day of the slaughter (el sacrificio), The Pig People asked participants from the community to dress up in scrubs and put on masks and gloves. A makeshift wet lab was erected upon a folding table. The sacrificial pig was carried into a main room where community members were waiting. One of the researchers injected first an anesthetic and then a poisonous chemical into the pig’s neck. Its lifeless body was placed upon a table. Another researcher beheaded the pig with a machete, and gushes of blood spilt from its carcass into a red plastic bucket below the table. The participants shuffled closer to see. The leader of The Pig People leaned in and whispered in my ear, “I don’t see any cysts… I hope we didn’t just kill a healthy pig.”

The necropsy was meant to be dramatic and theatrical. Moreover, it was designed around the assumption that demonstrating the tapeworm’s life cycle would unify the locals and the The Pig People in a mutual understanding of the parasite’s pathogenesis. Although staged as a form of collective inquiry, a rather classically coercive technique for modernizing peasants was still enacted. Firstly, the taller insisted upon the “optical inspiration” of scientific evidence—a belief that the necropsy and the microscopic lens would communicate the objective truth of causation by zoonotic transmission. Secondly, it was staged to effectuate an affective transference of visceral disgust toward the parasite. Thirdly, The Pig People believed that once the locals understood the parasite’s etiology, they would incorporate this knowledge into their daily practices by acting differently, that is, rationally and in alignment with the objectives of the public health initiative. From this vantage point, the taller did not really entirely intend to precipitate a transfer of knowledge but a substitution of explanatory models.

The researchers did accidentally kill a healthy pig. Despite having used the tongue-examination technique to substantiate positive infection, in this instance it had unfortunately rendered a false positive. The tongue, typically an organ of evidence, revealed itself as a hybrid of evidence and belief. The Pig People believed the tongue would yield evidence of cysticercosis, but the evidence it produced was that sometimes the tongue-examination works, and sometimes it doesn’t. The Pig People, however, felt that to admit fault in the technique would not merely erode what tenuous trust had been established among villagers and researchers, but might undermine their entire reason for being there (scientific and medical authority). Ultimately, they told the group that this particular pig only had one cyst in its tongue, which is why they couldn’t find any additional cysts in its flesh. They emphasized how this is common and particularly dangerous, perhaps even more so than a grossly infected pig, because it is much easier not to see fewer cysts, and it only takes one to cause infection. The tongue was thus transformed into an organ of artifice, a partial object in which a critical moment of epistemological ambiguity could be concealed.

Since then, I have often thought about The Pig People and wondered about their relationship with their hosts. I wonder whether the preponderance of parasitic relations in public health might be prevented if on some level its practitioners felt able to admit to the limits of biomedical knowledge in the field.

Melissa Salm is a postdoctoral scholar in the Bio.Polis Initiative of Stanford University where she focuses on conceptualizations of risk and the biosecurity stakes of gain-of-function research with viral pathogens. She recently earned her PhD in sociocultural anthropology from the University of California, Davis. Her dissertation examined how infectious disease epidemiologists mobilized the 'One Health' approach to study various endemic zoonoses across Peru.