Post-traumatic stress disorder fails to account for the psychosocial issues that arise in the wake of peace. We need nonpathological frameworks to give FARC ex-combatants the support they need.

In November 2016, the Colombian government and the Fuerzas Armadas Revolucionarias de Colombia (FARC) signed a peace agreement to end five decades of conflict. Three months later, I visited one of the 26 camps where members of this guerrilla movement—the oldest and largest on the continent—had gathered for disarmament and reintegration into civilian life. The image of an open tank of running water stayed with me. Around this temporary infrastructure, guerrilla men and women washed themselves, their clothes, and their boots at any hour of the day. Although private showers were available, most preferred the collective, vibrant, and joyful experience of the tank.

Andrés, a guerrilla commander in this camp of 500 people, told me that one of the major sacrifices that individuals made by joining the FARC was losing their privacy. The houses that FARC members and state-contracted civilians were building at the time responded, among other aims, to the need to restore privacy to ex-combatants. In simpler words, these houses were expected to enable them to move away from the water tank and get used to the shower. Nonetheless, restoring the private and intimate sphere to former guerrillas must not dilute the communal atmosphere that permeated the tank scene. For Andrés and others, that collective spirit was fundamental to bringing forth what would come next—a future where members of the FARC would actively participate in an armless politics within the margins of the law.

Open tank of running water with a rectangular shape, made of wood and covered with black plastic. The water thatsupplies the tank flows from a PVC pipe coming out of the floor. On the sides of the tank, there are men and women washing clothes on wooden tables. All of this temporary infrastructure is covered by a “roof” made of tree trunks and black tarp. In the background is a rural landscape.
Credit: Lina Pinto-García 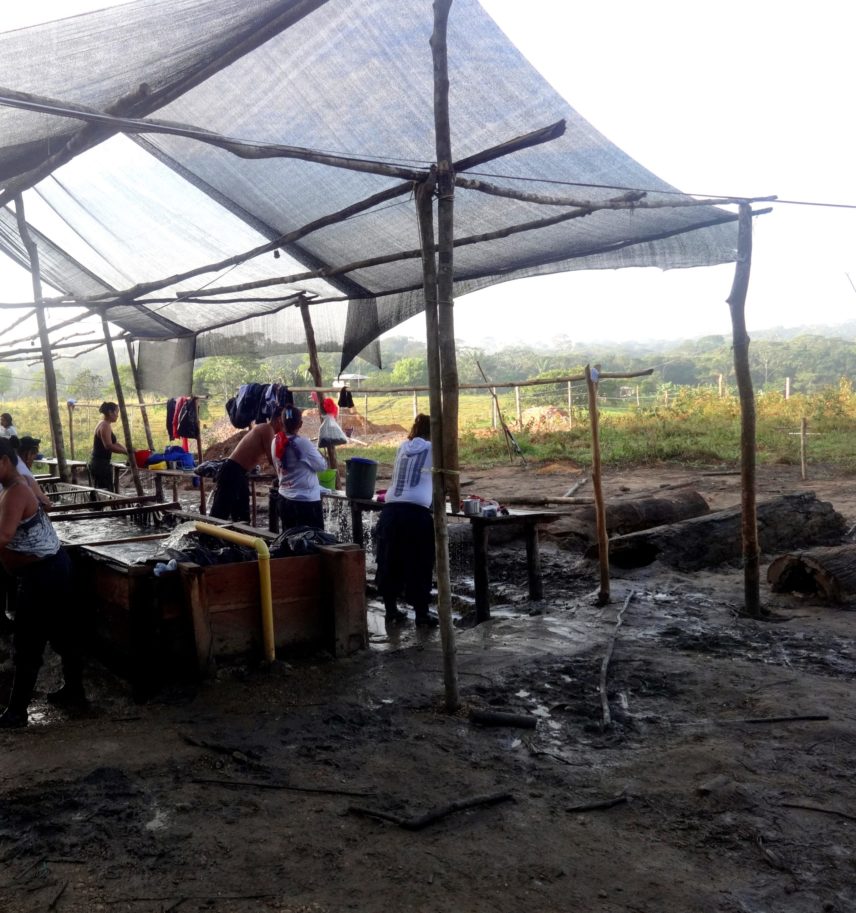 Open tank of running water at one of the camps where FARC members gathered for disarmament and reintegration.

It has been almost four years since that conversation. In the meantime, 254 former members of the FARC have been killed, and the implementation of the peace agreement has suffered from lack of political will, funding, and societal support. In addition, 602 social leaders and ethnic authorities have been murdered, violence is escalating, massacres are back in the news, and peace remains barely visible. In other words, Colombia is going through what Carolyn Nordstrom calls a period of “not-war-not-peace”: “Essentially it is a time when military actions occur that in and of themselves would be called ‘war’ or ‘low-intensity warfare,’ but are not so labeled because they are hidden by a peace process no one wants to admit is failing.”

Under these grim conditions and in response to their stigmatization by a large sector of society that continues to reduce them to remorseless criminals, many FARC ex-combatants have left the camps where they had initially planned to stay. Their relationship with other ex-combatants, which once constituted their primary support network throughout years of conflict, has now deteriorated. Additionally, they also face deep divisions within their political party that the FARC established in August 2017, leaving many without a political home. It is in this context that feelings of social isolation, frustration, fear, and hopelessness have become endemic among former guerrillas.

What has happened to the collective spirit that was supposed to facilitate ex-combatants’ transition and their political participation under democratic conditions? Psychiatric categories such as post-traumatic stress disorder (PTSD) do not adequately make sense of and address the mental life of former guerrillas, who now face an acute loss of social connections. More worryingly, these static medical categories are unable to capture the oscillating temporalities between war and peace that characterize Colombia’s present.

Row of about ten shower cubicles made of wood and white tarp. In front of the cubicles are a water tank, a garbage can, and piping. Trees can be seen in the background. Two of them have flags sticking out of the foliage. One has a Colombian flag and a Colombian Communist Party flag. The other tree has only a Colombian flag.
Credit: Lina Pinto-García 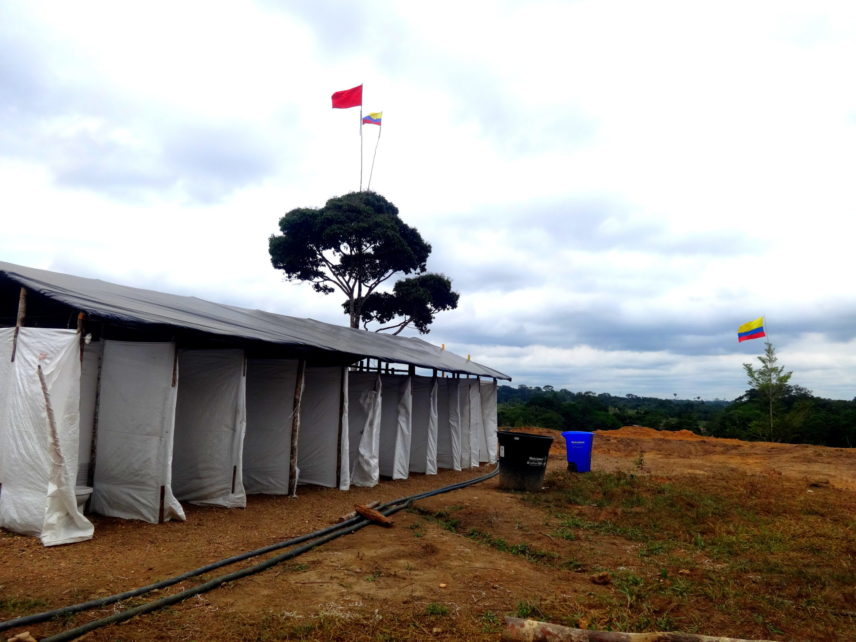 Row of showers and toilets separated from each other by a white plastic tarp.

“We are not crazy”

In February 2020, I spoke with Elisa Ramírez, a former FARC member who joined this guerrilla organization in 2002. We talked mainly about leishmaniasis, a vector-borne disease that hit the guerrillas hard during the years of conflict. When I asked her about other health issues that afflicted them, she stitched her past reflections to the present and mentioned “the problem of psychosocial health” that ex-combatants were facing in these so-called post-conflict times. Elisa told me that the discussions on that subject had begun in Havana, during the peace talks (2012–2016), at the government’s initiative. However, the guerrilla delegation always dismissed the issue because they found the mere insinuation to be both paternalistic and offensive, and did not want to create opportunities for them to be labeled mentally ill. “We always said, ‘No, we are not locos [crazy], give us some respect’” she told me. Elisa suggested that the problem lay in the way in which mental health issues in a context of armed violence are commonly thought of as a consequence of past war events rather than peace unfolding in the present. Clinical categories, such as the dominant idiom of PTSD and its emphasis on traumatic episodes taking place in wartime, may be useful to frame the former but not the latter. For her, this was an imported framework that had little to do with the difficulties that FARC ex-combatants were facing after the signing of the peace accords:

I think that, in the war, we were very close, and that helped us cope, right? I don’t think that we really suffered what those [US] soldiers who go to Iraq suffer and that one sees in documentaries—they become crazy and aggressive. I don’t see that so much in our people, but I do see a lot of them with all kinds of problems. They went from having lived in a community to living alone.

Elisa described the inability to foresee these outcomes as a failure of the peace process and the guerrilla organization itself. In her opinion, if mental health problems had been understood differently, today there would probably be more appropriate mechanisms available to address the serious emotional difficulties facing ex-combatants.

Although the medicalization of traumatic experience dates back to the mid-nineteenth century, PTSD has been the hegemonic category through which war-related mental health problems have been problematized since the 1980s, especially for military personnel and armed insurgents (see Young 1995). PTSD incorporates both a very particular way of understanding the psychosocial dimensions of war and a narrative about the normalization of wartime violence (MacLeish, 2019). Because the symptoms that define PTSD are always linked to a traumatic event experienced by a person in the past, individual afflicted psyches and temporality are crucial elements of this diagnosis (see for example, Brandt 2016; Young 1995). As a past- and individual-centered medicalized framing, it is worth asking whether PTSD and similar psychiatric diagnoses are able to aptly represent the current experiences of FARC ex-combatants. Much like Nordstrom’s representation of not-war-not-peace, contemporary Colombia is shaped by oscillating temporalities of war and peace that must be recognized in order for therapeutic initiatives to alter the conditions of violence shaping both the past and present.

Group of fourteen guerrillas, mostly men, with their backs to the camera, looking at a working backhoe. Several have rifles hanging from their shoulders and most are wearing military green clothing and rubber boots.
Credit: Lina Pinto-García 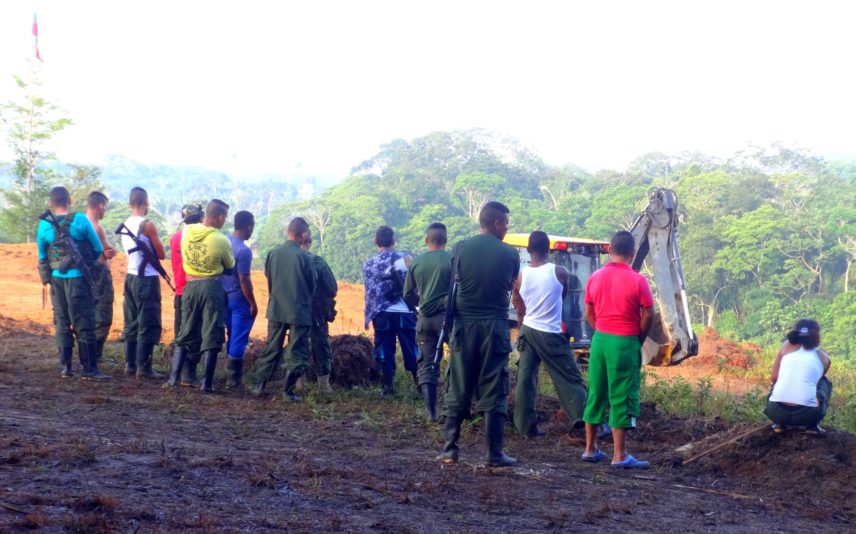 (Ex-)combatants in the early months of their reintegration process in Colinas, Guaviare.

By resisting the PTSD framing and insisting on the social isolation they are suffering, FARC ex-combatants draw attention to the alienation, marginalization, and violence they are experiencing in peace times. While PTSD may bring to the fore historical events that are worth addressing in the present—something that former guerrillas have not been altogether willing to do—its reference to the past does little to challenge persisting violence in “post”-conflict Colombia and the ways in which the social cohesion of ex-combatants has been under threat. Psychiatric diagnostic frameworks, with their focus on medical and individual spheres, also fail to address the loss of social connections that would sustain the political participation of ex-combatants and the emergence of alternative and pacific political forces in rural Colombia.

Technoscientific peacemaking is a term I have used to describe the excessive trust endowed to science and technology to build a peaceful future, especially when we are faced with failures in understanding the involvement of technoscience in the production and perpetuation of violence. As a peacemaking diagnostic technology, PTSD provides a space for war traumas to manifest but does not recognize that after war, violence does not always cease. It fails to account for the psychosocial issues that arise in the wake of peace, which cannot be reduced to a mental health problem from the wartime past. Better and nonpathological ways of framing suffering in a not-war-not-peace scenario are urgently needed. They should make visible how the destruction of social bonds jeopardizes both the achievement of peace and the political participation of alternative voices—FARC and non-FARC—that are essential to overcoming violence in Colombia.

Mel Salm and Victoria Sheldon are section contributing editors for the Society for Medical Anthropology.

Lina Pinto-García is a research affiliate at Oxford University’s Institute for Science, Innovation and Society (InSIS) and the School of Anthropology and Museum Ethnography. She studies how the nexus of extractivism and political conflict affects environmental and human health. Her current book project explores the entanglements between biomedicine, public health, and war/peace in Colombia.