Scientists are bringing an endangered species back to health in the lab and wildlife reserve. They are also reimagining the prairie ecology of the American Midwest.

Cryopreservation provides the tools for crafting a new scientific ice age, in which the ability to freeze and store biological materials is pivotal to assisted human reproduction, livestock breeding, and conservation biology. These three practices converge in the revival of the black-footed ferret (Mustela nigripes), the most endangered mammal in North America. Using sperm cryopreserved in museums and zoos over three decades combined with assisted reproductive techniques culled from human reproductive technologies, scientists at the Smithsonian’s Conservation Biology Institute are breeding better ferrets for uncertain futures. 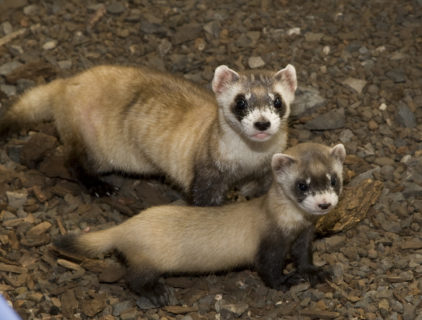 Thought extinct twice, most recently in the 1970s, a remnant population of black-footed ferrets was discovered in 1981 in Meeteetse, Wyoming. Initially left in place until a distemper outbreak threatened to wipe out them out completely, these “salvaged” ferrets were captured and used in carefully monitored breeding programs. Only 18 individuals were found, and of these only 7 were deemed viable for producing more ferrets, and in doing so, preserving the species from extinction. A coalition of scientists—veterinarians, field biologists, animal behaviorists, ecologists, conservation biologists, and geneticists—have worked together for decades to maximize their genetic diversity with artificial insemination (AI) using frozen collections (Holt 2016; Howard et al. 2016). More than 30 federal, state, tribal, and nongovernmental agencies are collaborating to conserve the species. Since 1986 over 8,500 ferrets have been created from the original founder population and conditioned to survive in the wild, with over 300 reintroduced in 29 sites across 8 US states, Canada, and Mexico.

A small furry face pops out of a black plastic tube, two dark button eyes flick past me, scanning its surroundings—a hunter on the prowl. Then in a blur the ferret launches forward and tackles its sibling, two balls of fluff wrestling in the soft groundcover of their enclosure at the Smithsonian National Zoo in Washington, DC. These two black-footed ferrets (or BFFs, as the conservation biologists call them) are now a few months old, and will soon be transferred to a training facility in Wyoming to learn to hunt and survive on their own before being released into one of several dozen wildlife reserves. For now, their mother emerges from the den and watches as they play. Their father, however, died some 20 years ago. His sperm was collected and frozen in liquid nitrogen when the remnant population was discovered, to be used two decades later to broaden the genetic diversity of the species.

The process of collecting semen from largely unstudied species of wildlife was only part of the initial challenge, when most of the techniques migrated into wildlife conservation biology from dairy farming: “A cheetah is not a cow,” as one conservation biologist said, “You have to figure out the biology [of the species] and then figure out what ART [artificial reproductive technology] is going to work.” To develop the techniques for black-footed ferret artificial insemination they used “proxies” of domestic ferrets (Mustela putorius furo) and Siberian polecats (Mustela eversmannii), the closest living relatives of the critically endangered black-footed ferret: “We couldn’t just start trying with BFFs. . . so we developed the AI protocol using two model ferret species.” Over many years, and many ferrets and polecats later, a reliable protocol emerged.

The process of collecting ferret semen involves a delicate touch: “When we first started, we were just using tiny catheter tubes to collect these minute droplets of semen . . . not a lot to work with.” Mild anesthesia is administered to a male ferret before a small anal probe is used to electrically stimulate the ferret to produce a droplet of semen. The semen is diluted with a solution, or buffer, to help it freeze without forming ice crystals, which would cause cell damage. Pipetted into tiny divots carved in a block of dry ice, the resulting frozen pellets are collected, placed in cryotubes, and labelled with barcodes. These are then sorted into a vast schema of studbooks and online match-making profiles to produce the least-genetically related black-footed ferrets possible.

To make baby ferrets with AI, the frozen pellets are thawed and the healthy swimmers separated from the deformed sperm and surgically inserted into the anesthetized female ferret’s uterus after artificially triggering her ovulation cycle with a hormone injection. Over 8,500 ferrets have been produced in the various captive breeding, or ex situ, programs, most by unassisted ferret-driven copulation, but many through ART (Santymire et al. 2018). “Ferrets have sexual preferences,” as one biologist told me, “sometimes they just don’t want to mate with the ferret we need them to for gene diversity, and that’s when we used the AI.” This trickle-down influence from both human biomedical technologies and livestock breeding includes processes such as artificial insemination, in vitro fertilization, and the cryopreservation of sperm and eggs. Techniques once used to assist infertility in humans or breed better cattle supply the conditions of possibility for the remaking of black-footed ferrets with biotechnology.

Black-footed ferrets feed almost exclusively on prairie dogs, also known as the “chicken McNuggets of the prairie” according to one conservation biologist, using their burrows as shelter and to raise their young. The systematic extermination of prairie dogs as agricultural pests—their burrow holes can break a cow’s foot with a wrong step—as well as outbreaks of sylvatic plague have wiped out entire prairie dog populations, and in turn the black-footed ferrets which depend on them. “Breeding more ferrets won’t solve the problem unless there’s a healthy ecosystem to return them to,” as one ecologist put it. The process of remaking ferrets is also a process of remaking an ecosystem and recreating a specific version of the American prairie grassland: one replete with prairie dogs and ferrets, even if that means ongoing human intervention to sustain the delicate ecological balance, from breeding ferrets in captivity and training them for release to inoculating prairie dogs against disease. 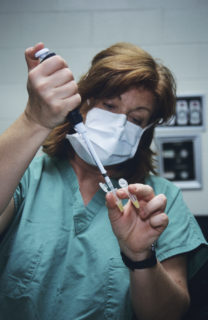 A key collaborator in ferret revival is the National Black-Footed Ferret Conservation Center in Colorado, or “ferret school,” which has proven successful in instilling the necessary behaviors and skills for ferrets to survive in the wild on their own. The rigorous preconditioning program consists of transferring captive-bred ferrets into outdoor enclosures with their mother and littermates for about a month, where they learn to navigate the burrow systems that will make up their natural habitat on the prairie. They also learn to hunt prairie dogs (collected from agricultural sites and marked for extermination, they find a new albeit short life as bait) and to respond and defend themselves against natural predators—training that has included researchers swooping down with stuffed birds of prey and manipulating remote-control “robo-badgers.”

In parallel with the AI techniques for generating ferrets, the US Fish and Wildlife Service has started a program to distribute peanut-butter flavored pellets laced with a vaccine to prairie dog populations. With large geographic areas to be covered, the use of drones to distribute the pellets seemed like an ideal solution (Hyegi 2017). This bucolic landscape of the North American prairie, rolling grasslands with prairie dog villages and black-footed ferrets darting in and out of dens, can be seen from another perspective.

If we take a step back, we see the drones flying overhead, distributing vaccine pellets to the prairie dogs. Turn our gaze to the side and we see the ferret boot camp where ferrets are exposed to the outdoors, reconditioned, and taught to hunt and survive in the wild. And if we look closely at the ferrets themselves, we see that each ferret has been numbered and marked down in the studbook kept by conservation biologists. If we follow the studbook back to the labs and zoos where the ferrets were created to improve gene diversity, we see ferrets and their young distributed among enclosures, burrowing and playing, chasing each other through the plastic tubes that serve as proxy prairie dog dens. We also see the ferret body itself distributed in tubes of semen and eggs, frozen in tanks of liquid nitrogen, used to make more ferrets and to research their genetic drift. Their biomaterials are also preserved for future genomic technologies that may overcome the increasing problems facing the future of the species. Care for ferrets involves a complex orchestration of ferrets distributed in whole and parts, rewoven into landscapes and into biotechnological futures.

With the increase in abnormalities in the current black-footed ferret population on the rise and fertility rates decreasing, questions are being asked about how to preserve the species for the future (Santymire et al. 2018). While the Smithsonian group and their collaborators have focused on careful breeding programs to increase gene diversity, they agree this is not a permanent solution and that genomics may hold the answer to editing ferret genomes to increase diversity. Taking the allure of genomics much further, another black-footed ferret revival program has proposed cloning black-footed ferrets using domestic ferrets as host mothers, while also editing the genes of prairie dogs to be resistant to disease (Wisely et al. 2015). Predator and prey would be remade to fit into their ecological niches in new ways. However, others in the black-footed ferret conservation community raise ethical and practical questions about this approach. “Besides the stress on the individuals during egg retrieval, what kind of ferrets are they going to be creating exactly?” one geneticist asked, “When you focus on just the molecular you can lose sight of the whole animal—how it functions, what it needs—and maybe you even lose sight of the whole species.” 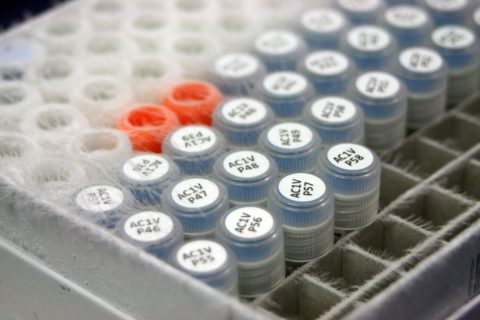 While the collections at the Smithsonian’s National Zoo and Conservation Biology Institute include more than 2,500 samples of frozen sperm or embryos from over 100 species, it also holds over 108,000 samples of animal tissues from 1,500 species preserved in the Center for Species Survival Genome Resource Bank. Emerging genomic techniques could potentially transform these tissues into stem cells, and then direct them to become either eggs or sperm (Stanton et al. 2019). “Genomics is the real solution,” as one geneticist told me, “We just hope the tech gets there in time.” However, it is not just the technology that is changing; the preconception of how and why it should be used to reconstruct ecosystems also comes into question.

Biobanking ferret genetic samples preserves the potential diversity of the species. Yet on a larger scale they also preserve specific ideas about the “wildness” biobanks can contain and in turn the kinds of landscapes and ecosystems they can be conceived of reproducing. As technologies migrate from human biomedical contexts into the “feral” landscape of biodiversity conservation, they carry with them the imaginaries of potential to both literally and figuratively reproduce different futures. These futures are populated with ferrets engineered in labs and used to reconstruct—perhaps more precisely to resurrect—an idea of the iconic American prairie, one re-engineered to be untouched by extinction, habitat loss, plague, and agricultural expansion. The ecosystem is being curated to bring it back to “health,” cared for with a steady stream of meticulously resurrected ferrets and inoculated prairie dogs. “We will always need to be producing ferrets for release into the wild,” one conservation biologist told me, “Unless the genomic tools emerge to fundamentally change the game . . . we’ll always need to keep an insurance population and keep the breeding programs going.” This is a complex weaving together of human and non-human actors, of the cryopolitics of reviving species mixed with vaccine drones and reimagined feral landscapes. At the center of this assemblage is the “latent life” (Radin 2013) encapsulated in the cryocollections of frozen ferret samples, which as one geneticist told me, are fundamentally “just ferrets waiting to happen.”

Adrian Van Allen (University of California, Berkeley, the Smithsonian National Museum of Natural History, and California Academy of Sciences) is a cultural anthropologist who studies museums as technologies for constructing natural-cultural worlds. Currently an Abe Fellow of the Social Science Research Council, she is conducting a comparative study of biobanking policy and practice in natural history museums in the United States, France, and Japan.