Published in the November/December 2021 issue titled, “Truth and Responsibility”

How do we transform land acknowledgments from conscience-clearing rites into meaningful calls to action?

There they sit, at the end of each email, like toothpicks by the cash register at the diner: purported land acknowledgments. Often accompanied by pronoun declarations and ally badges, these now-nearly-ubiquitous statements acknowledge that our institutions are built on land previously under the “stewardship” of Indigenous nations and peoples. Should we be glad for this admission? Maybe not.

In May 2021, the American Anthropological Association (AAA) officially “paused” land acknowledgments, as well as conference blessing ceremonies. The Association for Indigenous Anthropologists (AIA) advocated for both this pause and for the formation of a task force to investigate such gestures as part of a deeper inquiry into the historical relationships between anthropology and American Indian and Alaska Native nations. This task force, which the AAA has now empaneled, focuses on the impact that anthropological work has had on Indigenous nations—whether in terms of informing federal policy, undermining tribal sovereignty and land rights, or reinforcing stereotypes. Findings, including recommendations for improving land acknowledgment practices, are expected in November 2022.

The overall problem is that many land acknowledgments do not strive toward the reconciliation that Recollet advocates, and frequently land acknowledgements end up doing more harm than good. Too often, land acknowledgments are little more than highly performative, feel-good empty gestures, signaling ideological conformity to “a naïve, left-wing, paint-by-numbers approach” to social justice (borrowing from Amna Khalid and Jeffrey Aaron Snyder’s reflection on regimes of political expression). Even more troubling, land acknowledgments can unintentionally communicate false ideas about the history of dispossession and the current realities of American Indians and Alaska Natives. These ideas have detrimental material consequences for Indigenous peoples and nations. The project of reforming land acknowledgments, a request of the AIA leadership, must begin with a closer look at these and other problems.

Land acknowledgments often fail to acknowledge that Indigenous peoples owned the land, describing Indigenous peoples as mere “stewards” or “custodians.” Such language tacitly affirms the putative right of non-Indigenous people to now claim title. This is also implied in what goes unsaid: after acknowledging that an institution sits on another’s land, plans are almost never made to give the land back. This creates a void that is often filled by another sentiment: “What was once yours is now ours.”

Most importantly, too often land acknowledgments undermine Indigenous sovereignty, and they do so in ways that are both insidious and often incomprehensible to non-Indigenous people. For example, feeling, as they often do, that it is urgent and important to provide a land acknowledgment, non-Indigenous people tend to seek local “Indigenous” affirmation of their acknowledgment performances. This often involves foregrounding the voices of people with no legitimate claim to an Indigenous identity or sovereign-nation status. This effectively places the event organizer in the inappropriate position of deciding who is and is not Indigenous, in effect usurping the sovereign power that is exclusively reserved to Indigenous nations.

Appropriations of American Indian and Alaska Native identity by individuals who are not members of sovereign tribes is endemic in the United States. Some American Indians and Alaskan Natives refer to such individuals as “pretendians.” Demographic data suggest that such individuals may outnumber real American Indian and Alaska Natives by a ratio of four to one. In some cases, they persist in their claims in the face of a plethora of documentation to the contrary. When non-Indigenous people embrace them as real American Indians or Alaska Natives, as often occurs at land acknowledgments and blessing ceremonies, it irreparably harms sovereign Indigenous nations and their citizens. An organizational body or representative who appropriates the right to determine who is an Indian is making a direct assault on the sovereign right of Indigenous nations to themselves determine who is and is not a citizen.

Sometimes, missteps in this respect are rooted in the mistaken notion that the US government “recognizes” Indians, otherwise commonly misdescribed as “federal recognition.” This leads non-Indigenous people to erroneously believe that, by embracing pretendians, they are engaging in resistance against the US government. But the truth is that the US government does not “recognize” Indians. Rather, the US government acknowledges the sovereignty of Indigenous nations in much the same way that it acknowledges the sovereignty of any other nation. Sovereign Indigenous nations, and only these nations, have the authority to determine who is and is not a citizen, and hence who is and is not an American Indian or Alaska Native. This authority certainly does not reside with non-Indigenous entities such as corporations, universities, or professional associations.

Misunderstandings of Indigenous identities, such as those described above, exacerbate the feelings of alienation that many American Indians and Alaska Natives experience when confronted with land acknowledgment performances. When done wrong, land acknowledgments are heard by Indigenous peoples as the final blow: a definitive apocalyptic vision of a world in which Indigenous sovereignty and land rights will not be recognized and will be erased or regarded as a historical footnote.

A girl with hair tied back, wearing drop earrings and a V-neck t-shirt that states “THE STRUGGLE IS REAL” stares at the camera and leans against a railing. Behind her is a river and rail bridge on which the words “THIS IS INDIAN LAND,” are painted in white letters.
Credit: © Stan Williams 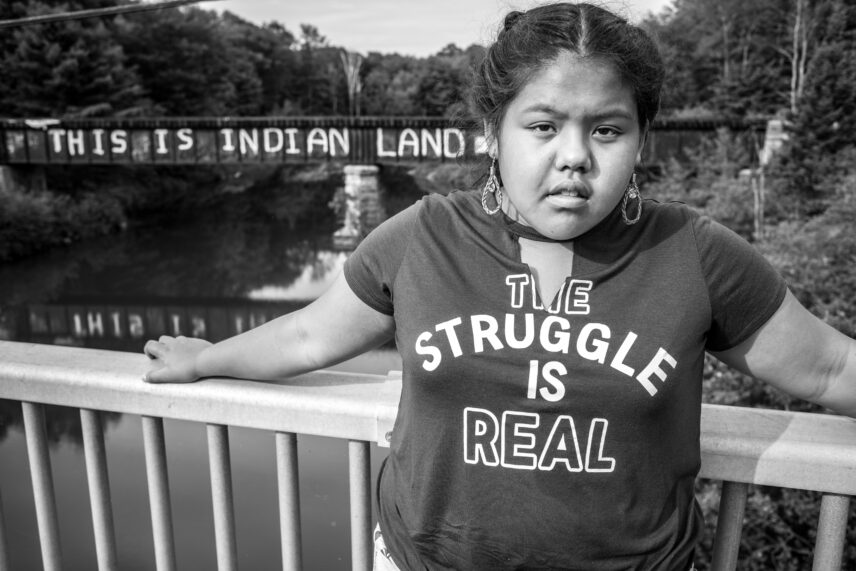 This is Indian Land

What makes a “good” acknowledgment?

What many Indigenous persons want from a land acknowledgment is a clear statement that the land needs to be restored to the Indigenous nation or nations that previously had sovereignty over the land. Those who are acknowledging must reveal a sincere commitment to respecting and enhancing Indigenous sovereignty. An example of such an action would be to publicly endorse and abide by the Cherokee Scholars Statement on Sovereignty and Identity, which articulates a Cherokee perspective on this issue and provides guidance on how to appropriately identify individuals as Cherokee citizens and what to do when confronted by fraudulent or questionable appropriations of that identity.

The truths surrounding land dispossession are necessarily disturbing, and the historical realities are almost always ugly. Land acknowledgments should not be feel-good maneuvers. If an acknowledgment is discomforting and triggers uncomfortable conversations, it is likely on the right track.

Non-Indians often mistakenly believe that land acknowledgments are about only the immediate land on which an institution sits or the land on which an event is being held. Land dispossession is far more complex than that; it should be recognized as a systematic and pervasive process of transferring wealth and sovereignty from Indigenous nations to non-Indigenous communities. For example, land-grant universities need to acknowledge prior ownership of the land on which they sit and the lands they acquired through the Morrill Act of 1862 (see Robert Lee and Tristan Ahtone’s investigative reporting on the expropriation of Indigenous land). Another example is the acknowledgment by the University of North Carolina at Chapel Hill (UNC) of not only the land on which it sits but also the fact that it depended extensively upon land stolen from the Chickasaw and Cherokee Nations to fund its operation prior to the Civil War (see Kelley and Wright 2020 for a detailed discussion).

It is vital to acknowledge that dispossession went hand in glove with other dispossessions. The colonial project that resulted in the United States depended also on the exploitation of unfree African American labor, as well as the use of other forms of domination and extortion. Mentioning these other dispossessions in a land acknowledgement is both important and appropriate.

A good example of a land acknowledgment is the Land and Labor Acknowledgment offered by the Abiayala Sovereign Nations Citizens’ Collective (ASNCC), a group of Indigenous faculty members at UNC-Chapel Hill. It was written as a template acknowledgment that could be adopted by university departments and units to speak directly to university leaders. As the statement notes, this institution was “chartered in 1789 as an institution designed to educate and further the careers of White men…[and] founded as an institution of White supremacy on…unceded lands.” The statement further points out that “UNC has substantially funded its operations through wealth derived from land documented as stolen … [and] relied upon enslaved and otherwise unfree African American labor to construct its buildings and facilities.”

The statement, which is well footnoted and explicit in regard to names and dollar amounts, ends with a request that UNC “proactively undertake actions to redress this illegitimately acquired land and labor that was crucial to [its] establishment and continued operation” by commissioning independent research into this aspect of its history “so that we have a comprehensive knowledge of what happened, including answers to the question of which nations and individuals have legitimate claims based upon these illegitimate and unethical actions.” It further calls for the university to “consult with these nations and individuals, identifying ways to redress, fully and without monetary restraint, these actions” and to “undertake substantial actions to reconfigure itself as an anti-racist and anti-colonial institution.” In short, the UNC statement recommended by ASNCC is a far cry from those virtue-signaling one-liners that we have now grown used to seeing.

ASNCC argues, and we agree, that effective land and labor acknowledgments should disrupt. Instead of existing as feel-good sign-offs, they must highlight the ugliness of the historical realities that non-Indigenous people leveraged in the process of institution building, which are the same realities that undergird the invention of land acknowledgments. For those unaware of that history, suggested reading might begin with Claudio Saunt’s Unworthy Republic. This book captures the scope and horror of land dispossession in what is now the American South, as well as the place of dispossession in the expansion and entrenchment of White supremacy. Another excellent book about dispossession is David Grann’s Killers of the Flower Moon. While this true account of Osage dispossession and murder tells a story that involves extreme expressions of evil, the use of marriage as a tool of land dispossession of Indigenous people by Whites is written into the DNA of many people throughout Indian Country.

The AIA leadership has long referred to conference blessings and land acknowledgments as “conscience-clearing rites.” We agree. Infotainment blessings and land acknowledgments that are tacked onto emails as if they were merely afterthoughts need to be critically reimagined or ended. Other efforts must be launched in ways that show an actual willingness to support Indigenous colleagues and their Indigenous nations. Vapid proclamations at the beginning of conferences and empty statements at the end of emails are often perceived by Indigenous people as insults. Not only are such performances often embedded with self-congratulatory messages but they also come laced with non-Indigenous expectations that the Indigenous people whom they implicate will respond with gratitude and appreciation merely for being rendered visible.

Michael C. Lambert, enrolled citizen of the Eastern Band of Cherokee Indians ([email protected]), is associate professor of African studies and anthropology at the University of North Carolina at Chapel Hill.

Valerie L. Lambert, enrolled citizen of the Choctaw Nation ( [email protected]), is associate professor of anthropology at the University of North Carolina at Chapel Hill.