Retiring into the Future and the Present

I revel in community, a place and sentiment where I flourish. I can’t imagine living a life apart, and I feel flummoxed when I’m not around people with whom I can share ideas—and emotions. In the field, I participated as fully as I could in the life of Quinua, the Andean town where I worked: dancing, drinking, helping (somewhat) in the fields, living with a family, and of course interviewing. I loved the relationships I developed, even with all their attendant human problems. On finishing my dissertation research, it was hard to say goodbye, to leave so many warm relationships. After finishing my PhD, I returned again and again to Quinua and its migrants in Lima to improve my data and to once again be with friends and dance the huayno. Over time, some Quinuenos have moved near me in New Jersey, a few living in my home. As I write this, I have asked one of them, a godson, to help reinstall my printer and we are planning to get together soon for a BBQ. Married to my niece, he is also researching my family history, as I had done his. 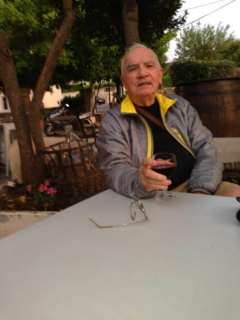 Arriving at Monmouth University as faculty in 1968, and desiring to live within a community, I became active in local peace and social justice movements, using these connections also to develop conferences at the university. I worked hard to build an anthropology major, and I was able to hire colleagues to staff it. Drawn to the active anthropological community in New York City, an hour and a half away, I began to attend talks and ultimately helped to organize them as a member of various advisory committees. I find great satisfaction working with others.

My wife, a medievalist, was also doing what she wanted, but in her own way. But as retirement loomed, we were faced with the question, What will we retire to? Confronting serious bronchial issues, we became snowbirds, spending summers in the northeast and escaping to Florida during the cold winter months. We moved near two close friends, members of a group of undergraduates who were in the “Society of Philosophy and Literature” at Brooklyn College, where on Friday nights, we discussed both literary works and such issues as the existence of god and the meaning of life, then going out to dance and at times to explore Greenwich Village together, activities that fostered friendships that have endured some sixty years. We’ve also made new friends in Florida, particularly in two book groups, but I needed anthropology and there is little anthropological activity nearby. That absence propelled me to become more active in the Association of Senior Anthropologists (ASA).

I had been involved with various AAA sections throughout my career, but as I grow older, my interests have changed. Rather than focusing on regional issues (Latin America) and specialty groups (ecological and economic), I was more interested in a generational group, sharing with people who had similar longtime interests in anthropology regardless of discipline or specialty. At first, I was reluctant to define myself as a senior—like many Americans I harbored negative feelings about aging and avoided any intimation that I was growing old, shocked like many others on receiving my first notice to join the AARP. But I am a senior, I decided, and I have found very congenial colleagues in the ASA. I thus entered a new community, an age grade, less focused on a desire to get ahead (ahead of what at this stage in my life?), but one of colleagues who share common historical experiences, as we continue to research and write, even as we may have varying conceptions of our discipline. I have met new people, whose work I had read but had never met, as well as others whose work I had not yet encountered. I have come to love this new community, and our annual sessions and business lunch, even if outside of the meetings we are mostly connected by email.

After several years I decided to run for a section leadership position, fretting at not being active, and I became vice president, serving for two years (2014–2016), and then President for the following two years (2016–18). Once again, I was able to do the things that I love: working with colleagues to foster the development of new programs. I did not feel alone: lots of people willingly gave advice and helped.

The vice president is responsible for organizing our academic programs at the AAA annual meeting. Alice Kehoe, a fellow Board member, and I organized two sessions each year examining various historical aspects of anthropology, keeping the historical memory of our discipline alive. As president, I have continued along the same lines, particularly with helping colleagues on the executive committee work to improve our services to senior anthropologists and to the entire anthropological community. One important development during those years was creating trips outside the meetings themselves, beginning with our trip to the National Anthropological Archives in Washington, DC, which Jim Weil organized. Another was Sid Greenfield’s work with young anthropologists creating sessions for the Annual Meeting that reached across generations. Our secretary Sue Kenyon, who replaced Paul Doughty, raised our social media presence, recreating our list serve and expanding our publications in Anthropology News. Margo Smith, our treasurer, kept the economic police at bay. Alice Kehoe serves as the ASA advocate for AAA members who have physical limitations that make it difficult to hear or to move from one session to another. As our activities became more complex, we appointed Maria-Luisa Achino-Loeb (Mimma) to a new position to help plan the Annual Meeting sessions and to work on membership recruitment and retention. The whole Board worked on these and other matters: my job was to coordinate and encourage. I never felt alone.

I have loved my ASA service. As we grow older, we don’t stop being who we are, even as we may need to modify what we do. On retirement, some develop completely new interests and I briefly thought of taking up the violin, but I really wanted to continue being an anthropologist and to do so within a community. A quote that is wrongly attributed to Freud resonates with me: “Love and work are the cornerstones of our humanness.” It sounds corny but following this dictum has brought me great satisfaction and happiness. I started such work in college, then in the field, followed by publishing, teaching, and organizing at the university and in the peace and social justice movements, and now at the ASA. These activities have brought me great happiness.

Come join us! Why not?

Sue Kenyon is contributing editor for the Association of Senior Anthropologists.