Political discourse often paints Islam as inherently non-European. This must change if we are ever to successfully counter Islamophobia.

In autumn 2020, a string of violent attacks hit France and Austria. In France, as so often in recent years, the satirical magazine Charlie Hebdo and caricatures mocking the Prophet Muhammad were at the epicenter of these events. Public responses to these violent attacks on the streets of Nice, Paris, and Vienna had much in common: the perpetrators were immediately labelled by politicians and media as acts of “Islamic terrorism.” President Emmanuel Macron seized the opportunity to call for imposing a new social contract on Muslims living in France, a “Charter of Principles” of French Islam. In Austria, Prime Minister Sebastian Kurz spoke of an attack of Islamic terrorism on liberal democracy and values. He argued that “the problem of Islamic terrorism” in Europe remains constant and singular: “It’s the idea of radicalizing youth, of radicalizing the second generation of people who live in our societies to fight our societies.” The implications of this discourse are clear. Muslims in Europe can never fully belong to European national polities; they will always be considered the Other. It is hardly surprising therefore that across Europe the media and politicians continue to represent the perpetrators—but all European Muslims as well—as people of “immigrant background.” This framing, often dressed in the language of liberal values, has serious ramifications. It affirms and mainstreams increasingly prominent far-right Islamophobic discourses that insist that Europe is white and Christian and is therefore under threat from Islam and immigration.

Many critical scholars have pointed out that European Islamophobia has its roots in European colonialism and imperialism. They show how Europe’s inability to reckon with its troubled (post)colonial histories has ostracized, marginalized, and racialized Muslims, first in the colonies, and subsequently in Europe. These ongoing historical silences and denials, combined with growing European Islamophobia, exclude Muslims from full citizenship in European nation-states on the grounds that they are different, that is, non-European, non-white, and Muslim. However, much of this critical scholarship, in reducing questions about Islam and Muslims in Europe to immigrant communities and the afterlives of European colonialism alone, have ignored and unintentionally reinforced another exclusion of European Muslims, writing the millions of autochthonous Southeast European Muslims out of the story. This ongoing omission has serious implications because it forecloses other possibilities for critical scholarship to challenge the attempts to extrude Islam from Europe’s history and Muslims from belonging to Europe. How can we bring these omitted histories of Muslim lives back into critical conversations about Islam in Europe today?

A large gathering of people fills a lawn before a wooden structure. The open grass area is surrounded by trees.
Credit: David Henig 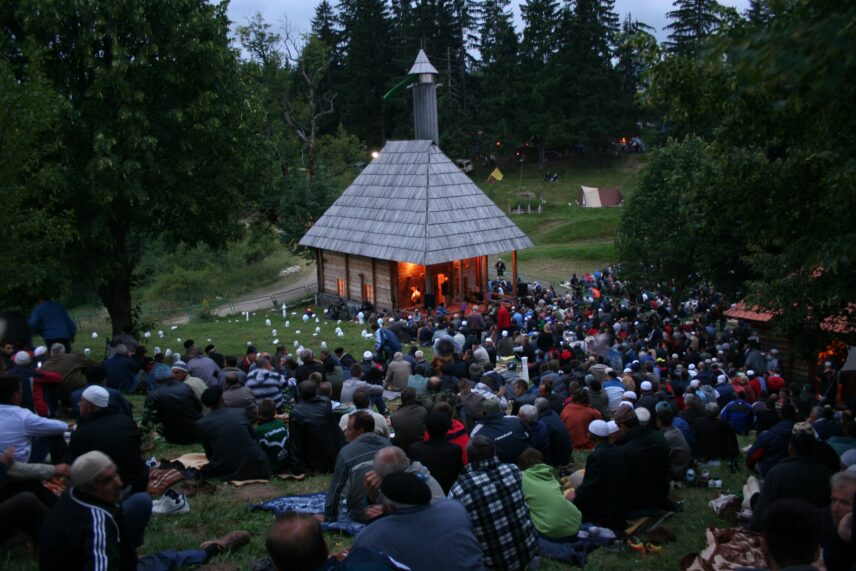 In my recent book, Remaking Muslims Lives: Everyday Islam in Postwar Bosnia and Herzegovina, I offer one such untold (hi)story of Muslim lives in Europe. Drawing on a decade of fieldwork in villages and small towns in central Bosnia in the postsocialist and postwar years, I follow stories that span generations and cut across thresholds of multiple national as well as global sociopolitical transformations. Numerous scholars have focused on the “Muslim question” in Southeast Europe solely through the lens of regional nationalism and identity politics, and thereby separated it from wider debates on Islam in Europe. As my book shows, this position reduces a vast array of experiences and lively religious traditions into discourses on the politics of identity, and silences and de-historicizes other ideas and practices that play an important role in Muslims’ articulations of what it means to be Muslim and to live a Muslim life in Europe today. As I argue in the book, these articulations are ultimately defined by the fundamental moral question of how to live, rather than simply the identitarian question of who am I? And history—or more precisely subaltern and vernacular everyday historical work—matters in this neglected story of Islam in Europe. For my interlocutors, the articulations of being Muslim have been profoundly entangled in Europe’s “age of extremes” throughout the twentieth century, be they shifting forms of secular modernity aligned to state socialist power, commitment to nationalism, or experiences of violence and political instability in the wake of the collapse of socialist Yugoslavia. This European history is also part of my interlocutors’ experience of their own past, belonging in the present, and orientation toward the future. But they also have been influenced by old and new geopolitical entanglements and cultural exchanges with the wider Muslim world and ummah that stretch beyond the borders of Europe. By tracing the entwinements of historical consciousness and religious experience embodied in the stories and actions of generations of Bosnian Muslims, the book paves the way for rethinking and writing against the historical silences that pervade popular and scholarly accounts of Muslim lives in Europe today, lives that cannot be reduced to the histories of European oversea colonialism and immigration.

When in autumn 2020 the Charlie Hebdo debates about freedom of expression versus “Islamic terrorism” were again intense, some Bosnians circulated older Charlie Hebdo cartoons published in response to the Bosnian war (1992–1995). During the Bosnian war, Bosnians of Muslim background became a target of mass violence, including the genocide in Srebrenica when 8,372 Bosnian Muslim men were killed and dumped into mass graves. These cartoons included images that ridicule the wartime tactic of mass rape, which targeted women of Muslim background in particular. Another image depicted the mass graves from the Srebrenica genocide with a tourist lying on a freshly excavated mass grave as if it were a beach. When I asked my Bosnian interlocutors what they made of these cartoons, they did they not talk about freedom of speech or about the clash between so-called liberal and Islamic values. A lack of elementary human decency and dehumanization bothered them more. “What is funny about genocide? When did rape violence become funny?” they asked. Many of my friends have spent the postwar years as teachers, activists, writers, or witnesses against the denial and silencing of the genocidal atrocities perpetrated systematically against Bosnian Muslims. As they often pointed out, denialism as a tactic of silencing the past goes hand in hand with the mainstreaming of hatred through Islamophobic discourses such as, for example, the labelling Bosnian Muslims as “Turks” during the war, which, again, marked Muslims as exterior to Europe.

The Charlie Hebdo cartoons of the Prophet Muhammad are often used as a linchpin in discourses that claim to defend liberal values against Islam in Europe. The lives lost in the magazine’s offices and on the streets of Paris, Nice, or Vienna are undeniable human tragedies. But these debates in the name of “liberal values” often sidestep other human tragedies, just as satire can mainstream and even inspire dehumanization and crime. In the fight against Islamophobia and other far-right threats, we urgently need to align questions of immigration, troubled colonial legacies, and racism and white supremacism, with the attempts to whitewash the genocidal atrocities committed in places like Srebrenica. This is an even more vital exercise in our contemporary moment when far-right movements are on the rise globally. It is no coincidence that the perpetrators of the Srebrenica genocide have become an inspiration for numerous white supremacists and neo-Nazi groups worldwide, including the shooters in Christchurch, New Zealand, and in Oslo and Utøya, Norway. As Michel-Rolph Trouillot once remarked, “No amount of historical research about the Holocaust and no amount of guilt about Germany’s past can serve as a substitute for marching in the streets against German skinheads today.” Trouillot’s prophetic statement is a reminder about our scholarly and civic responsibility to challenge in a forthright manner all forms of hatred and racism in Europe, be it anti-Semitism or Islamophobia, past and present. One way to do that, as Trouillot suggested, would require us to develop a different practice of historical narration. Indeed, we need to abandon any dichotomy between Islam and Europe and instead acknowledge the deep and connected histories between them. We might then be able to tell a more persuasive story of how Muslims of different walks of life and backgrounds conceive of Islam as a European religion, and Europe as a place of belonging. Failure to do so, to invoke Trouillot once more, could result in others taking the story in their own hands.