Gang-style homicides and lynch mob beatings occur regularly in the Guatemalan city of Quetzaltenango, where gang and vigilante violence have supplanted state violence as the primary registers of power. Public records in Guatemala reveal young men are the most frequent perpetrators of violent crime, but they are also its most likely victims. Gang-style homicides and lynch mob beatings contribute to this disproportionate distribution of criminal violence in spectacular fashion, marking young men as both dangerous and in danger. My work examines this double-bind by investigating the relationship between emergent youth masculinities and ritual acts of interpersonal violence. The symbolism and incarnate performance of these ritual acts transform how participants and spectators relate to themselves and others, restructuring power relations and social hierarchies in the process.

During three years of living, and hanging out with young adults in Quetzaltenango, I studied the shifting relationships and identities they would embody as they engaged with the distinct, but also porous and overlapping, social worlds around them. This relational approach to urban ethnography immersed me in the everyday lives of callejeros (street-dwellers), mareros (gang members), students, artists, activists, and deportees from the United States, whom I accompanied as they navigated the diverse norms and hazards that texture Quetzaltenango’s urban landscape. From this research emerged an understanding of gang-style homicides and lynch mob beatings as violent border-crossings between social worlds that shape everyday life in the city.

On December 9, 2016, a 45 year old driver and 17 year old fare collector working one of Quetzaltenango’s busiest bus routes were shot to death. On the same day, a 30-year-old driver and 17-year-old assistant from the same bus route were buried in the city’s central cemetery, murdered on the job just two days earlier. All four victims were male, and both attacks occurred while the buses zigzagged across the city loaded with passengers. Police attributed the murders to gang-run extortion rackets. No arrests were made.

Such gang-style killings have become commonplace in Quetzaltenango, a city beset with overlapping extortion rackets run by loosely organized gangs. Several signature characteristics mark these killings as gang-style: They occur in broad daylight amidst crowds of spectators. The assailants arrive and escape on the back of a motorcycle. And the victims are targeted at close range with multiple shots from a handgun. Journalists appear soon after, publishing details of the crimes directly to Facebook. Depending on the story, online readers might pray for the afflicted and curse the assailants. Or they might judge the victims with tattoos and criminal records as deserving to die and congratulate the assailants for ridding the city of undesirables. When police describe homicides as the ajuste de cuentas (settling of scores), journalists and their readers take it as the cue to vilify victims. 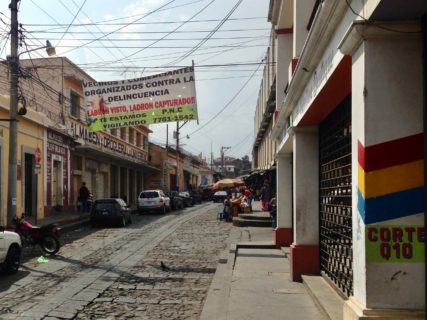 A plastic banner warns “Neighbors and merchants are organized against crime. Thief seen, thief captured!! We are watching you.” Amir Mohamed 2017

Gang-style homicides can function as rites of passage for assailants. These and other high-risk activities, such as delivering notes demanding extortion payments, are often reserved for young up-and-coming members as a means to ascend in ranking among their peers. Yet, the ritual efficacy of gang-style homicides extends beyond the internal power dynamics of the gangs. These spectacular acts of violence are intended for the broader urban population, transforming the bodies of victims into messages for actual and potential debtors about the consequences of defaulting on payments. City dwellers are made to witness the imposed violence with impotence, re-instantiating the necropolitical power of the gangs to levy extortion demands.

Responding to the impunity with which violent criminals operate in the city, residents have organized citizen-security groups that surveil neighborhoods, periodically apprehending and assaulting suspects before turning them over to police. Sometimes the collective anxieties that fuel these beatings intensify into what one journalist dubbed “delinquency-induced psychosis.”

On May 12, 2017, a young man walked beneath giant plastic banners warning, “Thief seen, thief captured,” and, “We are watching you.” He approached a family-owned shop and handed the clerk a folded piece of paper before rushing away. Someone yelled, “Extortionist!” and immediately bystanders captured the youth, beating him into submission and hogtying his wrists to his ankles behind his back.

Local reporters covering the story in real time on Facebook published headlines such as, “Merchants capture extortionist who delivered extortion note to business.” Readers responded to the developing story, posting violent suggestions for the impromptu lynch mob: “Beat him to death and burn the body, one less piece of trash.” “Cut off his hands and feet so he really suffers.” “That’s what these shameless rats deserve.”

The young man pleaded with the angry mob, insisting on his innocence. The police arrived and when someone finally read the note, they discovered that rather than a demand for extortion payments, it was a love letter to the daughter of the store owners. Shaken and bruised, the youth was set free. 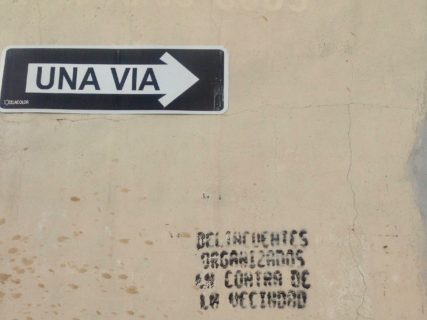 A stencil reads “Criminals organized against the neighborhood,” appears all over Quetzaltenango. Amir Mohamed 2014

Lynch mob beatings function as rites of affliction, ritual acts residents perform to temporarily invert their subjugated position of relative powerlessness vis-à-vis gang violence while symbolically purging their communities of crime. Plastic banners and Facebook Posts promoting vigilante violence prime participants for these acts, which begin with the detection of suspected criminals and move into physical assault and capture before the arrival of police, who document the occurrence and either arrest or set free the captured subjects. Meanwhile, news reporters broadcast the acts to online spectators, who participate through digital commentary. This commentary combines with the formal but flaccid authority of late-to-the-scene police officers to legitimize the informal authority of vigilante first responders, who are not charged with having broken any laws, even when the person they assault turns out to be innocent.

While ritual acts of gang and vigilante violence advance opposing claims of power over urban space, they take part in the “production of not-knowing” in like fashion, blurring the boundary between criminals and victims. Young men emerge from acts and representations of gang-style homicides and lynch mob beatings as victims who can be criminalized and as criminals who can be victimized. The embodied performance and online circulation of these violent acts produce a “chimeric image” of young men, at once dangerous and in danger. And yet, the brunt of this doubly precarious positioning is borne by some groups of young men more so and differently than others. City dwellers’ lived experiences of crime and insecurity in Quetzaltenango vary with relation to generation and gender, but also to many other markers of social difference.

To ask about young men’s relationship with interpersonal violence is really to pose questions about the variable role that violent acts play in the cultural production and performance of different youth masculinities—configurations of identity and practice that emerge in contact with one another, from intersecting processes of social differentiation. In what ways might threats and acts of violence motivate young men to code-switch between multiple youth masculinities? What cultural meanings do acts of violence inscribe on the young male bodies and selves of both perpetrators and victims? According to which criteria of social recognition are different forms of interpersonal violence afforded varying degrees of visibility and legitimacy? These questions guide my analysis as I grapple with the complexity of relations and identities forged in urban crucibles of violence.

Amir Mohamed is a PhD candidate in the Department of Anthropology at Cornell University. His dissertation, Public Displays of Abjection: Urban Space, Ritual Violence, and Contested Masculinities, addresses how Guatemalan youth produce and disrupt intersectional social disparities through their engagement in and with violent practices.