Rolling the Dice during Lockdown

Ludo became a lockdown sensation in India as players sought diversion from the dangers and unpredictability of pandemic times.

In March 2020, India entered a nationwide lockdown. Confined at home, we suddenly had a lot of time on our hands. Some people passed the time on television, social media, and online streaming channels like Netflix and Amazon. Others pursued their hobbies or indulged in something new―painting, cooking, baking, gardening―and showcased their activities on Facebook or Instagram. With businesses, parks, fields, and gyms closed and everyone forced to stay indoors, interest in classical tabletop games such as carom and chess began to boom. Meanwhile, Ludo, a traditional board game in India and part of many a 1980s childhood, enjoyed a lockdown revival. Millions of Indians took up the free-to-play mobile game application Ludo King―glued to their smartphone screens, rolling the dice, advancing their tokens. It became one of the most popular online games as people set aside PUBG: Battlegrounds and TikTok to race brightly colored tokens around a board and bring them back to their “home” square.

Everyone seemed to be playing the game, from corporate executives to my own family. MyGate cofounder Abhishek Kumar posted a photograph of his lockdown life on social media: a Ludo board, a diaper, and a laptop. Actor Anushka Sharma and Indian cricket team captain Virat Kohli played Ludo with one another and with family. The headline of a story on the rise in people adding nonessential luxuries to their online shopping baskets noted, “Lockdown and Hankering for ‘Non-Essentials’―Pyjama Set, Roti Maker, Ludo, and Whatnot.” Mumbai Police even joined in with the game’s popularity, playing on the Ludo theme with hilarious memes for their COVID-19 prevention campaign, including images of a Ludo board and the slogans “Stay at Home to Win” or “Creative Warning: The Safest Place to Be Is In.”

Ludo King, the digital game based on the original board game and created by Indian developer Gametion Technologies, accumulated a staggering 26.8 million downloads in April 2020, up 45.5 percent from March and 142 percent from February. People installed the mobile game and competed against strangers. They challenged friends in diverse geographic locations using the online multiplayer mode. They played with family members in the pass-and-play mode, handing off the phone or tablet with each turn.

Like everyone else, my wife and I stayed at home. We lived and worked from our apartment in Bangalore, more than two thousand kilometers away from our respective families in North India. Once we recovered from the initial shock of quarantine, the physical distance from friends and loved ones, and the unfurling hours of unstructured leisure time, we, too, got hooked on Ludo. We played Ludo after lunch, with afternoon snacks, and before going to bed. My wife played with her sisters and cousins, who were residing in different cities and states, through online Ludo rooms. Soon, playing Ludo became another part of our daily life during lockdown. While playing, we chatted about the latest news updates on rising numbers of COVID-19 cases and deaths, and the plight of migrant workers who were left in the lurch by lockdown, stranded far from home without work or money. We tried to thwart the monotony and isolation of lockdown and the fear of pandemic with the rattle of rolling dice.

The rules of playing Ludo are simple. It can be played between a minimum of two players and maximum of four. It is a race game that involves rolling the dice, advancing your tokens, and capturing your opponents’ tokens on your way to home base. While rolling the dice depends entirely on luck, moving the tokens involves a bit of calculative risk. It requires caution about exposing your tokens to the potential risk of being captured by an opponent’s roll of the dice. Playing in our apartment, we took the risk of venturing a token out onto the board only as a last resort. We rattled the rolling container hard with hopes of getting our desired numbers. And as the digital version of the board game “went viral,” our play revolved around conversation about, and the experience of, pandemic.

A critical reflection on the popularity of playing Ludo during the pandemic suggests historical, anthropological, and sociocultural connections. Historically, Ludo is a traditional game played in the Indian subcontinent, with roots in the sixth-century game of Pachisi. The caves of Ellora, a UNESCO World Heritage Site dating back to 600–1000 CE, contain a relief depicting a game of Pachisi. It is also known as Chaupar or Chausar, said to be one of the causes of great war in the Indian epic the Mahabharata, after Yudhishathira, the eldest of the Pandavas (the five sons of King Pandu), rolls away all his possessions, including his spouse Draupadi. It was also a favorite game of Mughal Emperor Akbar who played a version of the game on an outdoor life-size board and employed his enslaved girls in place of tokens. In 1896, the British introduced this ancient game to Europe and named it Ludo.

Each corner of the board game has a colored box with four dots of the same color within (red, green, yellow, and blue). Arrows extend out of these boxes, then turn parallel to the box and point to the middle of the board, where all four arrows meet.
Credit: Natasha_Chuen/iStock 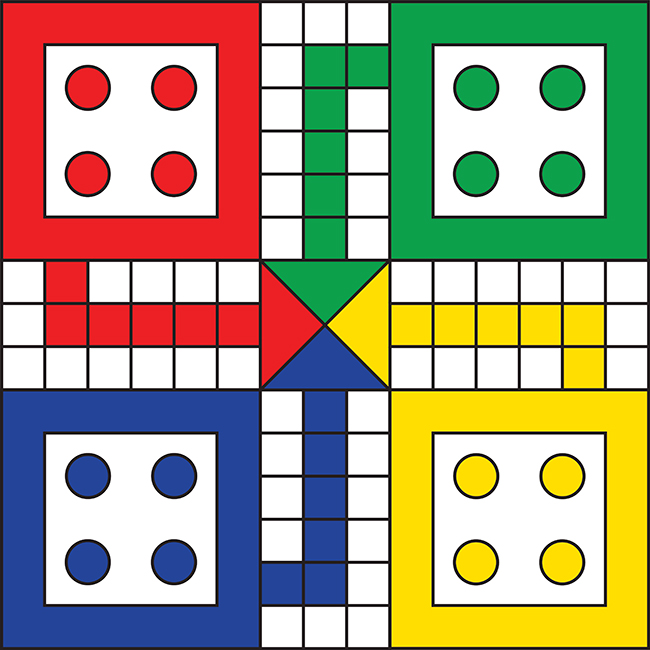 Fast-forward to 1980, and Ludo was a favorite afternoon game in my family, particularly when we were not allowed to go outside to play other games due to inclement weather. We kids used to invite friends to our home to play Ludo. It was a budget friendly game, available in hard-bound paper with plastic tokens for those who could not afford more expensive games like the carrom board. In 2020, a game of Ludo King was only a tap away on a tablet or mobile phone. It could be played and enjoyed without any prior experience, training, or strategies.

Many of us indulge ourselves in playing games at all ages, and the popularity of games attests to the importance of play in human life. For historian and cultural theorist Johan Huizinga, writing in 1938, play is a defining feature of human being: “In culture we find play as a given magnitude existing before culture itself existed, accompanying it and pervading it from the earliest beginnings right up to the phase of civilization we are now living in.” Psychologist David Elkind counts play as one of the three elements of a full life along with work and love. French sociologist Roger Caillois notes that ludus relates to the primitive desire to find diversion and amusement in arbitrary and perpetually recurrent obstacles. Ludic activities are play activities that include not only games, but all of the behaviors we also think of as “playing.” They were evident in Italians’ balcony singing and playing of instruments in collective shows of solidarity and courage during COVID-related stay-at-home orders. As the virus proliferated, playing Ludo and other games helped people to cope with the fear and uncertainty of living under lockdown.

Uncertainty, vulnerability, and for some people a feeling of uselessness, seemed all-pervasive in the early months of the pandemic, author Arundhati Roy capturing the moment with the questions, “Which scientist or doctor is not secretly praying for a miracle? Which priest is not-secretly, at least, submitting to science?” During this dark time, colored by a then-mysterious coronavirus beyond our command and the abrupt unsettling of everyday routines, the concrete, unexceptional rules of the game offered comfort, something to control, and a way to pass the hours (for those not struggling to work and homeschool children).

Ludo, of course, is part an uncertain game of chance—Caillois’s idea of alea—and part a game of planning and risk. Perhaps the playing of Ludo reflected a resignation to chance, fate, and crisis outside our control. Writing in the Hindu, philosopher Rajiv Bhargava suggested that “With the arrival of pandemic, the surge of fatalism seems inevitable within the popular consciousness.” He went on to observe, “When things seem beyond rational comprehension, ordinary human beings with their practical consciousness rely on notions such as fate. They submit, surrender, resign themselves to and eventually accept their condition—‘so be it,’ ‘such is my lot.’” Or, for those experiencing the inertia and isolation of life indoors, playing Ludo might have offered opportunity for focus and even initiative. My students reported finding great satisfaction in managing to “kill” an opponent’s tokens (as is the Ludo terminology in Hindi). As the government scrambled to prevent the coronavirus’s spread and with hundreds of thousands of people dying from the virus, the lockdown policies, too, felt like a roll of the dice. Playing Ludo might have given people a sense of achievement and control while capturing opponents’ tokens or defending their own during a time when many people were out of work or working from home, alone in real life.

To play Ludo during lockdown was to gain a sense of solace, achievement, and control, to tap into childhood nostalgia, or simply to enjoy the social interaction and camaraderie of engaging with friends and family over a board or via a screen. We are no longer living in lockdown, of course, but the pandemic is ongoing, and millions are still playing the game. Though I stopped playing Ludo as my work resumed, people were playing during the late evening when I visited my hometown after the lockdown was lifted. Young people are dating their Tinder matches who share their “Passions” for playing Ludo. And Ludo King has crossed 800 million global installs.

Santosh Kumar is an assistant professor in the Department of English and Cultural Studies, Christ University, Bangalore, India, and holds a PhD in Linguistics from the University of Delhi. His research focuses on representations of disability in literature and folklore, and he is currently working on a project tracing the stigma of mental illness through idioms and proverbs in Indian languages.