While still with us, Sally Falk Moore enlivened us with her presence, surprised us with her modesty and irony, and enriched us with her scholarship and wisdom. We already miss her dearly. An intellectually generous scholar of Africa, she passed away on May 2, 2021, in Cambridge, MA. Victor S. Thomas Professor Emerita at Harvard University at the end of her career, she accepted an appointment at Harvard in 1981. She previously served on the faculty of the University of California, Los Angeles, Yale University, and the University of Southern California. She received her BA from Barnard College and LLB from Columbia Law School, where she was one of two women admitted to the study of law. She meandered into anthropology, receiving her PhD from Columbia University in 1957 for a dissertation based on historical research on Inca property rights.

Fresh out of law school, Moore worked briefly on Wall Street before becoming a staff attorney with the War Department at the International Military Tribunal at Nuremberg. There she was charged with investigating the criminal deployment of Zyklon B, the poisonous gas used in Nazi extermination camps. Her investigation was a failure: the German staff in charge of helping her find evidence obstructed her work, hiding documents and refusing any archival ordering that might enable her to do so. Confronted with the limitations of law and the significance of its execution, she made the anthropology of legal and political systems and its processual study her central interest. In 1948, she met David Cresap Moore in Haiti—one of two encounters, alongside the Nuremberg investigation, that she thought changed her life most. They married in 1951 and she was a stay-at-home mother until 1963, when she also published her first academic article. It was not until 1968 that she felt free to begin fieldwork among the Chagga in Tanzania, with her husband and two teenage daughters in tow. In what was a first, she investigated the interactions between indigenous, colonial, and post-colonial social and legal systems in the context of the new socialism after independence. What, she asked specifically, did state attempts to decolonize mean for kinship, landholding, and law?

Moore published widely in professional journals, a selection of which she brought together in her final book, Comparing Impossibilities (2016). Before that, she published Law and Anthropology, A Reader (2004) and Anthropology and Africa (1994). To date, her most influential works have been Law as Process: An Anthropological Approach (1978) and Social Facts and Fabrications: “Customary” Law on Kilimanjaro, 1880-1980 (1986). In Law as Process, which is still taught in law schools, she shifts the study of law from its textual products and debates among legal scholars to its execution and effects in lived time. In Social Facts and Fabrications, she elaborates this concept of process by demonstrating how “customary law” is not prior to state law but a modern product of this encounter with the state.

Throughout her career, Moore received many honors and gave numerous invited lectures. She was deeply involved with multiple professional organizations as well, including the Social Science Research Council, American Ethnological Society and American Anthropological Association; she served on the editorial advisory boards of several professional journals. She and her husband Cresap were Co-Masters of Dunster House at Harvard; she was Dean of the Harvard Graduate School of Arts and Sciences and was appointed Affiliated Professor in International Legal Studies at Harvard Law School in 2009. In that final post-retirement position, she mentored foreign students in law and anthropology, work which invigorated her and about which she was proud. She continually reaffirmed her commitment to colleagues and friends on the continent in many ways.

Moore lived to be 97. I had an email exchange with her shortly before and after her final birthday. Though slowed by various ailments, she was still working on comments for a manuscript from Cambridge University Press. I had asked for a conversation via Zoom, but she was reluctant to show her face (so I thought) and instead responded with lucid emails with fewer spelling errors than my own. Each of the students she mentored had a different relationship to her, and to research; she never insisted we read her work or follow her approach.

Sally Falk Moore was a devoted educator, mentor, colleague, a loving wife, mother, and grandmother. Her husband of fifty years died in 2001. She is survived by her daughters, Penelope Moore and Nicola Moore; her grandsons, Benjamin Whitlock and Samuel Moore; the scholarship she inspired; and the many students whose lives she touched.

A woman with white hair sits in a chair, wearing an orange jacket and blue t-shirt with a blanket and newspaper on her lap. 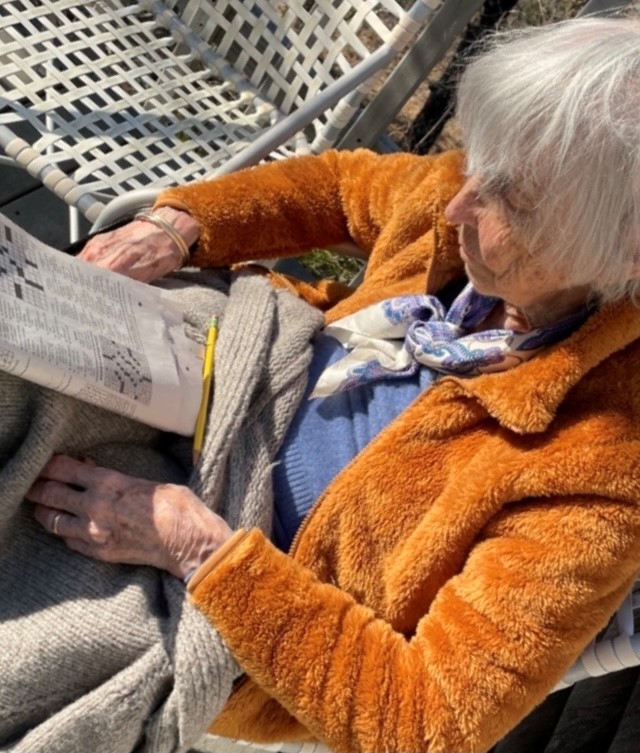