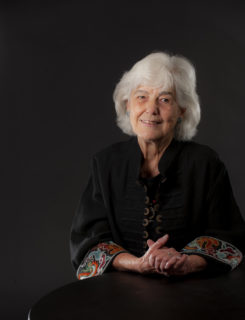 Image description: A light-skinned woman with shoulder-length white hair smiles at the camera. She wears a black long-sleeved shirt and clasps her hands in front of her.
Caption: Sarah Milledge Nelson

Sarah Milledge Nelson (November 29, 1931–April 27, 2020) enjoyed a remarkable career establishing contemporary archaeological practice in Korea, launching a series of books on archaeological recognition of women and gender, and leading scientific programs in the University of Denver.

She published eight books on archaeology, including two editions of The Archaeology of Korea, five edited books on archaeology, three books on women and gender in archaeology, eight edited books on women and gender issues, and three novels set in prehistoric Korea and China, centered on women. Between 2002 and 2008, she developed the 17-book series,” Gender in Archaeology” with Mitch Allen for AltaMira Press. Among her grants, fellowships, and conferences were a Wenner-Gren symposium and she co-organized for the Rockefeller Foundation at Bellagio, Italy, and a National Geographic Society grant for surveying Niuheliang, China. No deskbound academic, Nelson carried out surveys and excavations in Korea, north China, Colorado, and Utah. She framed perspectives for East Asian archaeology, bringing together Western and Asian scholars and assisting Asian archaeologists to participate in international meetings. Among her offices was president of the Society for East Asian Archaeology, (1998–2004), which she co-founded.

Korean archaeology was fons et origo (source and origin) for Nelson’s status both as a practicing archaeologist and as leader of feminist perspectives in academia as well as archaeology. Her graduate work in anthropology at the University of Michigan was tolerated, not assisted. Nelson and Lewis Binford, born one week apart in 1931, both in the South (he, Virginia, she, Florida), did PhDs at Michigan, a decade apart. Binford exemplified the Zeitgeist of “Man the Hunter”; Nelson, married for 66 years to a prominent medical researcher and a mother of three sons, was marginalized. She and the children moved to Seoul while her husband, in the US Army Medical Corps, monitored medical facilities in the Demilitarized Zone bordering North Korea. Inexpensive household help and collaboration with a young Korean archaeologist enabled her to survey and test Neolithic sites along the Han River, furnishing material for her dissertation and PhD, awarded 1973. Returning to Denver with her husband, she began a 45-year teaching career at University of Denver, bucking resistance to women’s studies and to strengthening anthropology.

Tribute after tribute posted on her obituary page remember her “warm smile,” intellectual strength, readiness to discuss questions with students, liveliness, and humor. RKOLGST (get it? Archaeologist!) her sportscar’s license proclaims. RKLOG Press, “Archae-log,” was her one-person publishing company for her novels and one by fellow Asian archaeologist Peter Bleed. Nelson didn’t bow to rejection, she just continued with projects however they could be managed. That understated persistence and can-do attitude carried her through daunting experiences contrary to the role convention assigned her. As women have come to be the majority among younger archaeologists, and study of sex-based roles and their material residue a normal practice in the field, Nelson has been their beneficent Tiger Queen (her last novel).