Chinese student volunteers reimagine a rooted global condition in which the global springs from the soil.

With Apollo 11’s successful moon landing in 1969, humans captured the first picture of the earth as a globe. Taken from a distance in space, this picture marks a pictorial imagination of the “global” characterized by imageries of the earth as a whole. The later globalization of this particular imaginary—prestructured by a grasp of the world as a picture and as something for use and pleasure—has influenced much discussion on education for the current “global condition.” 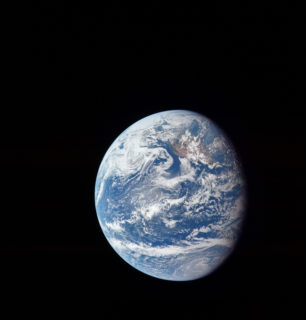 Looking back from Apollo 11. Astronaut photograph AS11-36-5339 was acquired on July 16, 1969, with a Hasselblad camera using a 250 millimeter lens. NASA, Johnson Space Center

Aiming to prepare students for this particular idea of the world, service-learning and study abroad programs have grown popular. Yet, this vision hinges on an assumed separation of program participants and the so-called global condition, be it global migration, global interconnectivity, or global neoliberalism. The globe is seen as another space that exists out there, waiting to be explored, consumed, and used by those whose passport allows them to freely pick and choose a destination, or by those with sufficient economic and symbolic capital to travel to a distant place and to be marked as an outsider of that destination. Service-learning programs that take place outside students’ country of origin become one-stop shops for another line on the resume, a few Facebook posts and tweets, and a “global” decoration to one’s identity.

Sitting through a few orientation sessions with organizations that run service-learning programs for Chinese students, I noticed designer handbags and high-end electronic gadgets in the crowd. Clearly, these volunteers—19- to 22-year-old Chinese students studying in American or British universities—have the capital that distinguishes them from those rural students they set out to teach. After all, most were born in urban cities in China, and were admitted to and can afford an undergraduate degree at a foreign university. “Great! No prior teaching experience and they think they could teach and ‘help,’” I cynically wrote in my notebook.

“To be connected to the soil”

The expensive gadgets vanished after the volunteers arrived in the rural countryside; the designer handbags were replaced by simple totes. The volunteers started to wear plain T-shirts. Girls stopped wearing makeup, and those who packed several pairs of shoes for a three-week program were frowned upon. After spending time with the rural Chinese students, the volunteers came back to their temporary common room discussing surprises and frustrations, and fervently rewrote lesson and activity plans almost every night. When I asked why, a female volunteer said she should “jie di qi.” Literally translated as “connect to the soil,” this quality was referred to as an aspiration and a mandate. “To be connected to the soil” marks an interpretation of the “global” orientation that prioritizes decentering the self.

Di (the soil or earth) is of cultural significance in China. Observing the importance of the soil in Chinese peasants’ lives, Fei Xiaotong (1992 [1947]) points to the rooted nature of Chinese society and suggests that the modernization of Chinese society in the early twentieth century led to the formation of a particular moral geography. People and places that are closer to the soil (the countryside, rural people) are deemed backward, while places considered closer to the foreign (the West and other developed countries) are morally desirable. Despite the political changes of the last century, this cultural discourse is maintained by the Chinese government’s renewed drive to expand its state power on the global stage. Much activity in contemporary China focuses on moving ahead in this imagined global hierarchy, and Chinese students’ pursuit of university degrees abroad is a step on this path.

Yet, studying in the United States has led many volunteers to reflect on China and their own position in Chinese society. Mostly educated in an urban-centered Chinese K–12 school system, they have seldom been exposed to the “soil” or encountered the social structure that gave rise to the divide between soil and city, between these students and their rural counterparts. Studying in the United States and seeing themselves in a minority position has pushed the students to pay more attention to the underprivileged in China. It has also made them realize their own privilege growing up in China; they come to a rural part of China that they have limited knowledge about with the intention of “helping” and “learning.”

At the same time, coming to the soil also symbolizes the volunteers’ embodied resistance to the instrumentalist ethos that underlies much education in China. Talking about their peers who only “care about getting internships at PricewaterhouseCoopers” or studying in Europe to strengthen their language abilities, one volunteer commented that they “only thought about volunteering as something interesting …but why is it that everything has to be useful anyways?” Many volunteers said the rural countryside is a place where they could halt the progressive and productive mandate that characterizes much education.

Attempts to connect with the students with rural backgrounds led the volunteers to learn about their own limitations. Just as alumni and staff had told the new recruits in orientation sessions, the volunteers faced surprises. Toward the end, many volunteers said they felt disillusioned. They had come to the program with the ambition to help; in the concluding ceremony, volunteers questioned the extent they could do so or exert influence. Many also said they had learned much about themselves. One student explained this as realizing how “limited my own world has been.” Others aimed to return the following year to visit their students so that the students could, at least, remember the time they spent together. Few claimed to have successfully become a jie di qi person.

Getting closer to the soil in this way is a self-fashioning experience for a privileged few: a young Chinese person must first be uprooted to be able to present themselves as a person who wants to connect to the soil. Yet, what marks out their experiences as different from much of the global service-learning industry is the unfinished nature of their activities. Many volunteers have kept in touch with their rural students after returning to their “normal life” and revisit the places where they volunteered for a second or third time. Notions of the “soil” started to decenter their taken-for-granted way of being that prioritizes the instrumentalization of all experiences, while getting closer to the soil initiated self-reflection and even self-interrogation, which does not end at the conclusion of a short-term program.

More importantly, the volunteers envisioned a rooted global condition in which the global springs from the soil. Unlike in other global programs that focus on the particularity of the external Other, in this program Chinese volunteers imagined and worked for a globe in which they themselves are existentially connected to the internal Other. In this sense, jie di qi is a local practice of a global imagination that goes beyond treating difference as a mere decoration to existing privilege; rather, it is a critical arena for the scrutinizing of one’s position in relation to others. Through cultivating capacities to listen and relate, service-learning programs have the potential to be a form of critical education, where participants decenter their taken-for-granted way of being and reimagine the global.

Chenyu Wang is currently a visiting assistant professor of anthropology and education studies at Hamilton College. She studies politics of multiculturalism in education, race theory, and critical pedagogy in global context.