Linguistic ethnography within (non-tactile) sign language communities is almost inherently visual. Without images, how would one capture and convey how signers communicate?

Photography and video are not always acceptable for disseminating visual data and findings, let alone conducting fieldwork itself. Photos add expense to printing, and photocopied photos become undecipherable blurs. More problematically, cameras may be forbidden in ritual contexts, or participants and researchers may negatively associate them with witchcraft, exploitation, distraction, wealth, or past trauma. In rural Guatemala, where I work, many find electricity, phones, and Internet access costly and unreliable.

My solution for preserving data is to draw cartoon-style caricatures. For research on Mesoamerican sign languages, cartoon graphics are not just a means of documenting signed linguistic discourses; they can reiterate and embody some of the ancient techniques that Indigenous artisans used to represent ancestral signs or gestures.

Many Guatemalan Mayas avoid cameras not operated by relatives. During the country’s genocidal 36-year civil war (1960‒1996), the government used photos to track and accuse people. Memories of violence, rumors, and fear of reprisals are still strong decades after the war’s formal end, often intensified by post-war conflicts. I’ve worked with several signers who refuse to be filmed. One deaf K’iche’ interlocutor does not want the military to learn he survived his own extrajudicial execution in the early 1980s. Another deaf Maya let me film him but forbade publication of his visage until after his death, because he feared being tracked down by men whom he’d seen murder someone decades before (Fox Tree 2021). Others shun cameras to avoid being recorded saying things that might anger a past or potential abuser.

A seated lord receives a drinking vessel. Like a speech balloon in a modern comic, a “speech scroll” connects the lord’s mouth to glyphs recording his words, with a branch tying these to his gesturing hand and the drink.
Credit: Erich Fox Tree 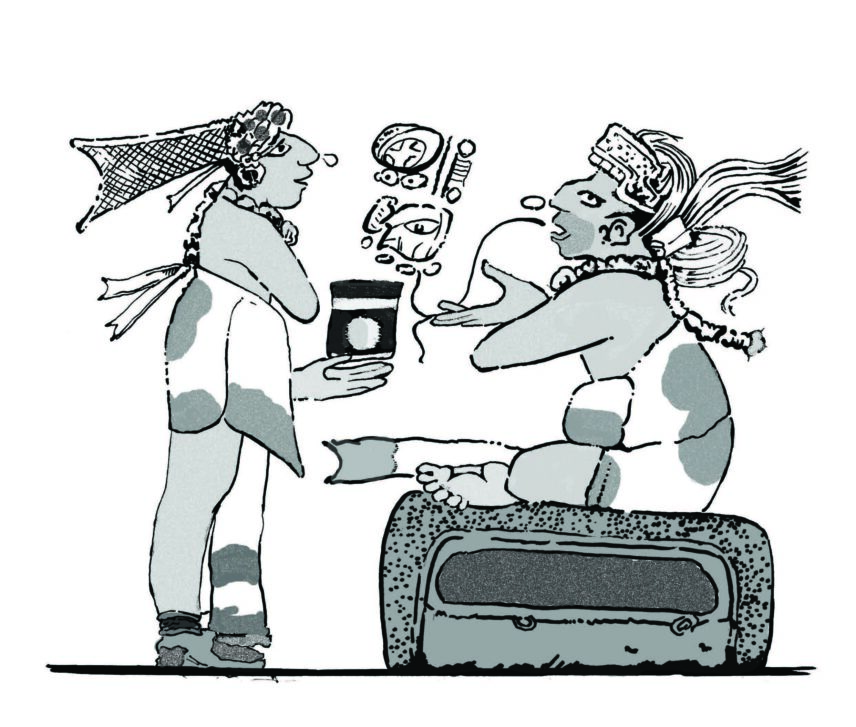 I always honor such requests, despite complications for dissemination of data about signing. Hand-drawn illustrations, although time-consuming, can hide people’s identities. They can also help me with my research, by reiterating what is truly amazing about Indigenous Mesoamerican signing: its utility for interpreting ancient iconography.

Since the 1970s, Anthropologist have identified at least three generations-old Indigenous sign languages in the Maya Area, each used in multiple communities: one in Yucatan, one in Chiapas, and one in Guatemala (see Smith 1977; Fox Tree 2009). I argue these are pre-Hispanic and descend from an ancient proto-sign language. Yet even if that were not the case, they constitute a tremendous repository for comparisons with ancient iconography, because they draw on conventionalized gestures shared across Mesoamerica and developed in similar ecological, technological, and cultural-historical milieus.

I’ve been analyzing potential correspondences between ancient Maya art and modern Mayas’ signing, not just to interpret the former, but to help revitalize the latter. I’ve worked most closely with a sign variant spoken in dozens of communities in Guatemala that some K’iche’-Mayas call Meemul Ch’aab’al (“mute language”) and which Tz’utujiil-Mayas term simply Meemuul, (“mute-thing”). I am currently compiling a video dictionary of the language, but I have also drawn cartoon-style graphics for publications.

A woman stands in profile and points to her mouth, then extends her hand out, palm up. Facing her, there is an individual seated and wearing ornate clothing, including a hat. They point to their mouth, and then in front of them.
Credit: Erich Fox Tree 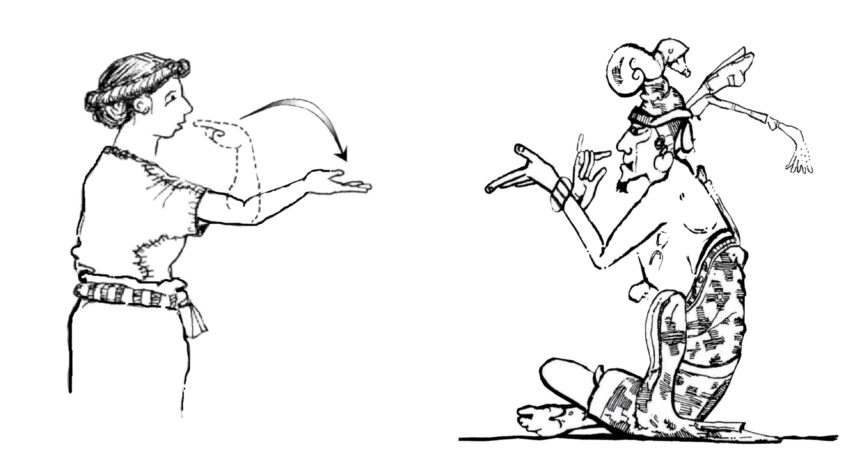 Figure 2a (left): Comic sketch by the author of a Maya woman signing, “[I] SAY THIS,” in Meemul Ch’aab’al, a modern Indigenous sign language of Guatemala. Her huipil, skirt, sash, and hairdo mark her as Indigenous. Dotted lines depict her hand’s initial position.
Figure 2b (right): Author’s rendering of male figure on a Classic Period polychrome vase (K679 in Kerr 1998), long interpreted as conversing with a second figure, not depicted here. Image 2b suggests the antiquity of this gesture for denoting oral discourse, along with common—but not obligatory—conventions for representing movements: (1) foregrounding of the final hand position, (2) depicting the opposite hand in the background, in an earlier position, (3) extending the pinky to signal finger or hand motion, and (4) depicting excess limbs—in this case a finger—to signal motion

Scholars of iconography from the Classic Maya Period, ca. 200‒900 CE, have long sought to decipher the complex, regular gestures of human and anthropomorphic figures. They have even deciphered some human gestures or postures: a raised heel of a standing figure denotes dancing and a hand pointing away from someone’s mouth denotes speech (Figure 1). Depictions of individuals in action poses; sequential scenes showing passage of time; sequential juxtaposition of figures or limbs to represent movement; and speech scrolls attached to hieroglyphic texts, all give ancient Maya art a comic-like quality. By reconstructing ancient signs using modern languages, I can translate dozens of other ancient gestures, plus ancient rules for representing gestures, poses, or movements. Doing so is crucial to appreciating both gestural continuities and the profound linguistic achievement of preserving gestural messages.

So why reinvent the wheel, especially where cameras are problematic? Instead of using the sign-phonetic alphabets, dance-style notations, cute computer graphics, or impressionistic tracings to transcribe manual gestures and visuo-spatial languages, I choose to reinforce the original comic styling of ancient iconography by producing comic-style diagrams. I depict the final hand positions of signs, as artists did in ancient times, for example.

A man holds one hand out to his side, palm up, and below his hand is a maize plant.
Credit: Erich Fox Tree 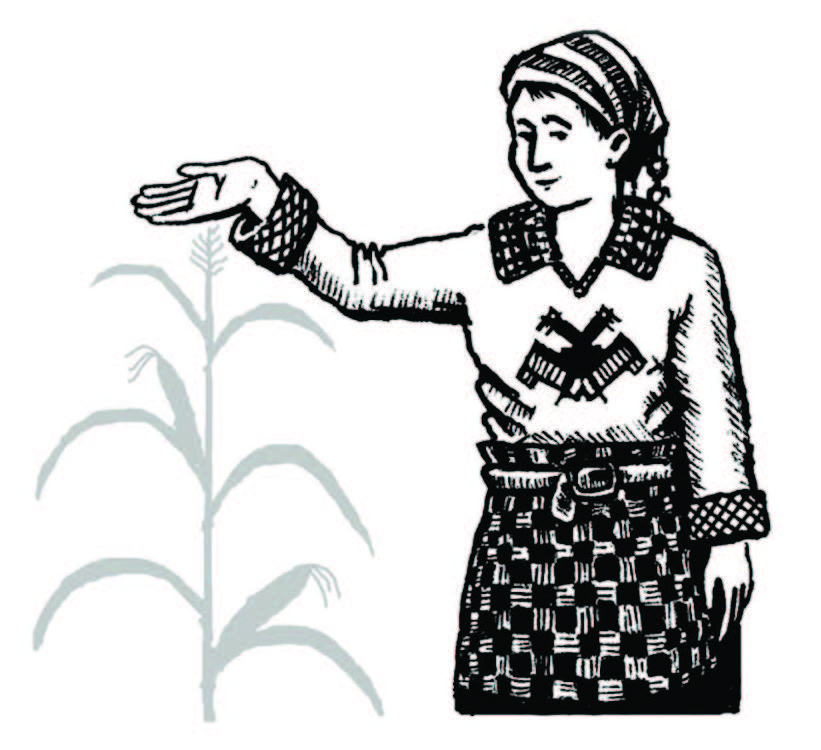 Figure 3: A man from the K’iche’-Maya town of Nahualá signs the almost pan-Mesoamerican sign for MAIZE FIELD, also used to indicate a plant’s height

I cannot completely adopt ancient styling, however. That would be premature without a fuller accounting of ancient conventions. Moreover, modern audiences might be confused by depictions of people with two left hands or two right hands, or with hyper-extended or contorted limbs.

Cartooning Maya-style is an ongoing and hybrid process. I can combine modern cartoon effects such as a dotted outline or a grey silhouette to connote a non-present item and thereby emphasize the logic of a particular sign (See Figure 3). Or I can connote motion with modern arrows, visual echoes, swooshing lines, and stroboscopic effects; yet these lack the simple elegance of ancient coming styling (See Figure 4).

Line-drawings have many advantages for ethnography, beyond reproducibility, such as being easily corrected or modified to demonstrate variations. Some advantages relate directly to the nature of expression in signed languages. Contrasts in muscle tenseness are hard to capture on film, for example. Yet these are a crucial sign-phonetic feature of Meemul Ch’aab’al. I can invent a system for connoting this otherwise hard-to-notice dynamic feature (as in Figure 5), not unlike how modern cartoonists creative diverse visual icons for connoting explosions, vibrations, odors, emotional states, and more.

Comic-styling can make signs seem accessible and familiar, as revealed by what deaf and hearing Mayas say about my illustrations: “Is he Nahualeño?” “Many deaf there.” Although my caricatures are usually amalgams, I’m always tickled when someone asks, “When did you draw Aura (or Catalina, or Manuel)?”

Three images of people are lined up. The first figure holds his palm out in front of him. The second figure, depicting the same person, and he is turning to one side, and the image depicts the movement of his hand being held down at his hip, palm up, then moving to his waist, while his other hand hits that one at his waist and then moves up. The third figure has their head turned to one side away from their front. They hold one hand up at their shoulder and the other down at their waist.
Credit: Erich Fox Tree

Figure 4: In Meemul Ch’aab’al, “[the] person went away” consists of the signs PERSON (4a, left) and LEAVE (4b, center), with a wave backwards and roll of the eyes to connote past action and an unspecified fate. The Classic Maya figure in image 4c (right), which comes from a funerary scene on a vessel likely represents the same gesture in 4b. (See K6547 in Kerr 1998)

More importantly, cartoons serve the deeper social objective of revitalizing these indigenous sign languages, all of which are threatened, especially by displacement by non-Indigenous sign languages, declining use by hearing Mayas, and general marginalization. Valorizing culture is crucial. I want my cartoons to suggest continuities between celebrated ancient art and modern signs.

I also want my illustrations to show Native signing to be beautiful, expressive, useful, and shared by diverse Indigenous peoples. Comics can effectively anonymize a research participant and recreate him or her as a local everyman or everywoman who embodies a community. By illustrating Indigenous signers in Indigenous clothing, I can emphasize Indigenous linguistic roots. By swapping a caricature’s outfit or hairdo, I can emphasize contrasts or similarities between different communities. Intuitively, people are more likely to appreciate a sign in a picture they find pleasing. Fortunately, I can beautify images by omitting background, redressing subjects elegantly, or just making people look admirable. Such embellishment is especially important for children, who most need to appreciate Indigenous culture and signs if these are going to survive.

A man lifts his hand, back of his hand facing out, and wavy lines surround the hand. The other figure holds both hands out in front of him, palms partially downturned with arrows indicating movement and wavy lines around the hands.
Credit: Erich Fox Tree 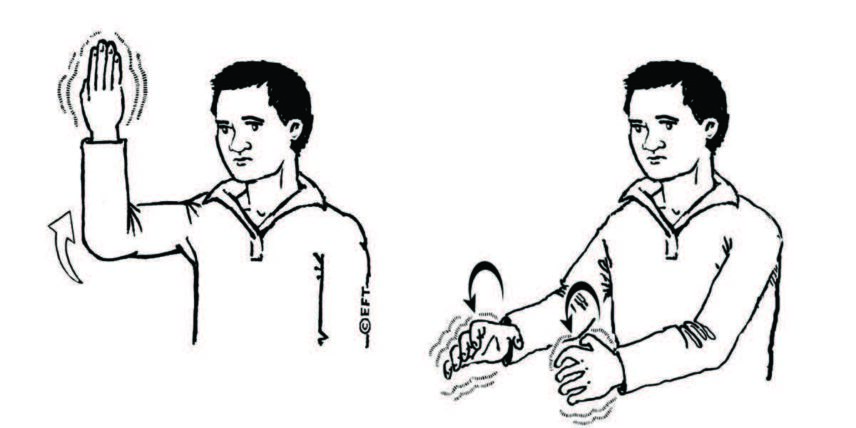 Figure 5: Author’s renditions of two Meemul Ch’aab’al signs featuring muscle tenseness, represented by wavy emanata. 5a (left) is the sign for EXEMPLARY. 5b (right) is a two-handed sign for ROCK. 5a would denote DOUGH without the tenseness.

The endangerment of Indigenous sign languages in Mesoamerica concerns me. These languages may hold the key to deciphering ancient iconography. They also demonstrate the complexity of precolonial, non-Western sign language communities comprised of hearing and Deaf people in ways that challenge established linguistic paradigms. As such, they are worthy of salvage documentation. But they are also worthy of revitalization for a thousand other reasons, ranging from the pan-Indigenous symbolism they embody within the multi-ethnic communities that speak them, to their role in rituals. Languages are crucial threads within a web of interconnected cultural experiences. Using comic-style drawings to explain sign languages can potentially strengthen that link.

It’s even more enjoyable when Mayas correctly “read” signs in my drawings. Their primary opportunities to comment on my art are while I am presenting slideshows or drawing during field-interviews to mark interesting discourse, or while paying locals to re-enact signs so that I can capture visual details. However, I am more thrilled to see Mayas themselves drawing signs. Most who do so are children, but a few are adults, including one professional illustrator and amateur epigrapher who claims to have taken new interest in elders’ gestures after I hired him to draw his town’s versions of signs I had filmed elsewhere.

Even more satisfying are my debriefing sessions with some of the elderly signers I’ve interviewed. The deaf ones have all been illiterate, and had likely never studied Maya art, let alone entered into a museum. They end up showing the value of cartoon-styling by interpreting not my artwork, but a collection of images of Classic Maya iconography that I always show research participants when debriefing. Often, they offer surprisingly consistent interpretations and prove the effectiveness of ancient comic styling. For me, one illiterate deaf elder’s excitement that he could “READ” what his ancestors “WROTE” 1500 earlier was the best proof that my research was on the correct track (Fox Tree 2021). In the end, the greatest compliment to my cartoons is if they get people more interested in ancient art and modern signs.

Erich Fox Tree, a former cartoonist with a PhD in anthropology, specializes in Native traditions and colonialist mythologies as an associate professor in the Department of Religion and Culture at Wilfrid Laurier University. He researches land conflicts, language ideologies, and Indigenous sign languages.