In the Andes, a fine fleece is highly prized. Yet, scientists’ understandings of genetic variation and classification diverge sharply with local herders’ relations with their herds.

The guanaco, as thin as the oxygen
in the wide brown heights,
was wearing boots of gold,
while the llama opened its innocent
eyes in the fragility
of the world full of dew.
—Pablo Neruda

Pablo Neruda, one of Chile’s Nobel poet laureates, wrote these lines in a poem called “Algunas bestias” (“Some beasts”). His words evoke the wildness of guanacos in contrast to the “innocence” of llamas, whose existence is closely bound to that of the human beings who herd them. The poet might also have juxtaposed vicuñas and alpacas. In the Andes, the wildness of vicuñas and the domesticated quality of alpacas are complex matters, no less so than those of guanacos and llamas. All these camelids are fleece bearing, with the vicuña having the finest fleece of all. Their fleece draws people and camelids into far-reaching webs of interconnections.

The guanaco’s nimble feet in boots of gold, like those of vicuñas, llamas, and alpacas, tread lightly on the earth because they are padded, unlike those of cattle, whose hefty feet crush plants underfoot. Guanaco and vicuña have coexisted for millennia in the Andes, along with the plants on which they browse and graze. European-introduced cows trample the vegetation. Sheep crop the plants so closely to the ground that when they graze, the vegetation they find unpalatable grows at the expense of a more varied flora. While following herds in my fieldwork in Isluga, a highland pastoralist community in the province of Tarapaca, northern Chile, I observe llamas and alpacas nibbling plants in a less invasive manner, here delicately plucking a tasty fruit from between cactus spines and there working their way across the spiny pastures characteristic of high altitudes. 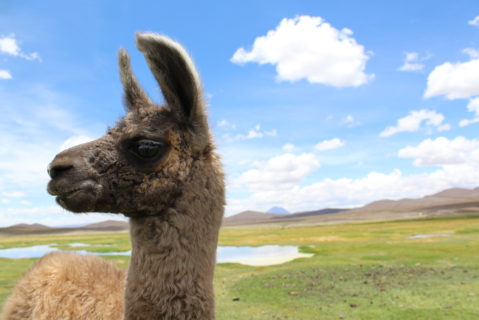 All four South American members of the camelid family are ruminants, possessing a three-chambered stomach. This characteristic enables them to convert the toughest of plants into nourishment for their bodies, from which fiber grows. Herders acknowledge that their llamas and alpacas have particular tastes for plants that grow in specific places. They say their alpacas, especially, need to have access to moist pasture grounds for their fleece to grow finely and in abundance. In many high-altitude communities, herders irrigate pastures to extend areas of moist vegetation.

My conversations with Isluga herders indicate that they distinguish between the behavior and dietary preferences of llamas and alpacas in a way that makes the latter seem like vicuñas (guanacos are rare in the region). If vicuñas and alpacas share some characteristics, there are nonetheless very real differences in vicuñas’ freedom of movement in contrast to that of alpacas, whose social organization is constrained by the human family caring for them. In the past, families let groups of uncastrated male alpacas graze on far distant pastures enriched by seeping snow melt from the mountains. These alpacas are reputed to have had very fine fleece, but the migration of people to earn a living in coastal cities has led to a shortage of herders to look after separate herds in the most remote pasture grounds. The point remains, however; herders associate alpacas’ ability to access good quality pastures with the highest quality of fleece.

The guanaco’s nimble feet in boots of gold, like those of vicuñas, llamas, and alpacas, tread lightly on the earth because they are padded, unlike those of cattle, whose hefty feet crush plants underfoot.Human beings have for a long time greatly prized the soft, fine fleece of slender-necked vicuñas. When Europeans invaded the Andes in the 1530s, plentiful vicuña populations were found in the Department of Ancash, Peru, at the northern extent of their range, through the highlands of Bolivia and northern Chile, and as far south as the region of San Juan in Argentina. During the fifteenth and early sixteenth centuries, this area formed the geographical backbone of the Inca Empire and the ruling elite restricted the highly valued vicuña fleece for its own uses. The relaxation of strict Inca control over local communities ushered in a period of ruthless predation, often by outsiders using firearms, greatly reducing their numbers. By the 1960s, vicuñas were in danger of extinction.

In the 1970s, Peru, the Plurinational State of Bolivia, Chile, Ecuador and Argentina established a series of agreements designed to implement strategies to preserve vicuñas in their native countries and to introduce them to Ecuador. Once their existence had been threatened because human beings found their soft fleece to be so desirable, now the terms of the Vicuña Convention envisaged that the signatory governments would be able to use vicuñas as a source of economic production to help save the animals from extinction and to support the viability of local human communities. Vicuña numbers began to increase. In 1996 their “vulnerable” status in the Red List of Threatened Species was changed to “lower concern” and, in 2008, it was modified again to “least concern” (Acebes et al. 2019).

Under carefully regulated conditions, some communities have begun to conduct periodic roundups of vicuña, shearing them for release back into the wild or into semi-captivity. Vicuña survival counts as one of the world’s few conservation success stories. There are problems, however, especially with poaching. In Chile, for example, only the vicuña populations in the Primera Región are included in Appendix II of the Convention on International Trade in Endangered Species, which permits trade in fiber and cloth from live-shorn vicuñas.

Outwardly, the ownership of camelids might seem self-evident, with alpacas and llamas belonging to the persons who herd them. Wild camelids in Peru and Bolivia are claimed as property by the state and the communities where they occur. Chile and Argentina regard them as res nullius (without owner), although in practice local communities can exert rights where live-shearing is permitted. Isluga herders view the matter in a different light. They say vicuñas and guanacos belong to powerful beings called uywiri—special places such as hills, water sources, and hollows in the ground. As beings who bestow order on the land forms and nourish both wild and domestic species alike, uywiri grant alpacas and llamas to human beings, but only on loan.

One day, I was in conversation with an elderly lady who, although she no longer spun and wove, had been an accomplished herder of llamas and alpacas. She pointed to one of the stripes in the blanket laid on the ground and on which we were sitting. “That was my llama,” she said, “She drowned by the junt uma [the sulphur-smelling thermal spring that feeds the moist pasture grounds]. I cried for my llama.” Isluga herders recognize their llamas and alpacas as individual beings with personal histories and they are slow to forget them. It is significant, therefore, that Andean languages do not have an abstract term such as “animal” to encompass all living beings.

When sixteenth-century Europeans transported “silver”-shod horses to the Andes, they also attempted to introduce the word “animalia” to Andean lexicons. An account in Spanish, purporting to convey the words of Titu Cusi Yupanqui (1529–1571), the penultimate ruler of the Neo-Inca state of Vilcambamba, describes how people reacted to the horses: “they saw that they [Europeans] were on some very large animalias, which had silver feet” (Titu Cusi 1992, 5). Given the linguistic lacuna in Quechua (which was the language of the Incas) and Aymara (spoken in Isluga and other communities in southern Peru, highland Bolivia, and northern Chile), this term must be a scribal interpolation. Herders today still do not see herd animals as a lumpen flock of merchandise, as collective nouns in European languages might imply. Instead they regard them as beings with individual identities gathered together as a common herd under human carers.

From 1986, when I started my fieldwork, until 1997, Isluga people reported that their alpacas did not have the full range of fleece colors occurring elsewhere in the Andes because color de vicuña was missing. By 1997, two vicuña-colored alpacas had been born in one family’s herd. The herders attributed the apparition of this hue to the beneficence of their uywiri. They spoke of it as a reappearance from within the genetic stock of the herd itself. Maggie Bolton (2006) has explored how llama herders in South Lípez, Bolivia, regard what outsiders call “defects” occurring within the herd as prototypes possessing regenerative potential associated with fertility. She explains that development projects attempting to “improve” llamas and alpacas by hybridizing them with externally obtained genetic capital interferes with their genetic composition. It also ignores the importance herders give to potential variation from within the herd.

For international trading purposes, dealers classify fleece in five different naturally occurring colors. Isluga weavers, in contrast, can identify up to eighteen, which they put to specific use in their weaving. This greater sensitivity to variation accompanies the ability of herders to recognize the individuality of their llamas and alpacas while also acknowledging that they share ancestral inheritance obtained from the more uniform coloration of their wild forebears. Isluga herders call llamas with a gray face and light brown body fleece guanacos, while the color de vicuña of the previous paragraph alludes to the cinnamon hue of vicuñas living in the northern part of their range (Isluga lies at the southern extent of this range).

Biologists, zoologists, and geneticists have conducted research into the evolutionary history, morphological changes, and genetic inheritances of camelids (Marín et al. 2007). They seek to improve camelid classification at species and subspecies levels, as well as their geographical variation, rather than identifying individuals within a herd or family group, as do Andean herders. Western-trained scientists and Isluga herders clearly have different approaches to knowledge acquisition.

Yet the work of conservationists who express concern over the loss of genetic diversity among vicuña and guanaco populations also recognize implications for alpaca and llama herds. Conservationists protest moving vicuñas from one place to another; doing so risks mixing the genotypes of different subspecies (Gordon 2009). Hybridizing vicuñas with alpacas, they argue, contaminates genetic stocks and permits the illegal exportation of vicuña genes through a backdoor route. Comparable arguments need to be disseminated more publicly in relation to the herding of llamas and alpacas. Rationalizations, including the introduction of abstract terminology in languages that do not have the need for such terms (such as animalia), or a reduction in the number of observable fleece colors for the purposes of marketing, demonstrate a lack of respect for local people’s categories and practices as well as threatening local genetic variation within herds.

For people in the Andes, fleece is precious. People in Isluga attribute the uywiri, as owners of vicuñas, powers of malevolence or benevolence over matters of uniformity or diversity in fleece, or between its scarcity and abundance in alpaca and llama stocks. Such relationships were neatly summed up when one person observed another’s success in herding: “Manuel’s uywiri is good to him.”

Penelope Dransart is honorary reader in the School of Social Science, University of Aberdeen. Her research, based on fieldwork in northern Chile, focuses on pastoralism and animal fleece as used in textiles. She is author of Earth, Water, Fleece and Fabric: An Ethnography and Archaeology of Andean Camelid Herding (2014) and editor of Living Beings: Perspectives on Interspecies Engagements (2013).