At a recent government-sponsored dance competition for retirees in Chengdu, the capital of China’s Sichuan province, more than 20 groups of retired women took to the stage to perform a dance routine set to Kangding Qingge, a Chinese pop song with lyrics extolling the romance of the Tibetan grasslands. This competition, and others like it, was a colorful staging of social harmony belying a more complex picture beneath the surface. 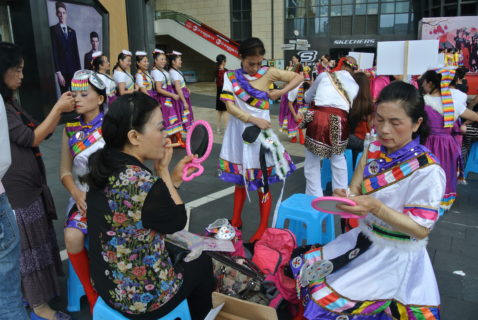 Between 2015 and 2017, I spent 18 months in Chengdu, researching the collective dancing phenomenon. Attending competitions was part of my regular routine. When I arrived at this competition on a summer morning, I saw hundreds of retirees sitting together in what looked like a rainbow sea of lustrous polyester. I first approached a group of women dressed in flamingo pink robes with yellow and green embroidered trim. They were helping each other put on complicated headpieces consisting of plaited ribbons with beading directly over the forehead and long, thin black braids flowing from the back. They each wore red satin stockings over their shoes to mimic knee-high boots when seen from afar. Next to these flamingo-hued dancers sat another group in nearly identical getups, save the fact that theirs were sky-blue. Still another group rehearsed nearby in red robes with detachable long sleeves extending more than 12 inches past their fingertips and a slightly different version of the same headpiece. As each of the groups ascended the stage to perform the same routine in succession, these sleeves and the ubiquitous black braids created graceful shapes in the air as the women danced. Behind them on the stage, a large banner displayed the names of the competition’s sponsors, which included the China Sports Lottery, the municipal district government, the district elderly sports association, and the local district’s social work organization. These state institutions and the retired dancers do not share the same agenda, but dance competitions offer organizers and participants alike the opportunity to broadcast their respective messages for a wide audience.

In preparation for this competition, organizers informed participating groups three months in advance that they would be competing to Kangding Qingge, which gave them ample time to practice the official, pre-determined routine and to get their costumes in order. Like the song Kangding Qingge, these costumes are not so much Tibetan as they are Tibetan-esque. Although some elements like the long sleeves and thin braids do appear in traditional Tibetan dress, the outfits are haphazard amalgamations of customary attire from different Tibetan regions and social classes. When I asked the dancers—all belonging to the majority Han ethnic group—about the origins of what they were wearing, they invariably answered that they were purchased online. Indeed, dance costumes like these can be found on China’s mega online-retailer sites like Taobao for less than 100 RMB (about 15 USD). On these shopping websites, there is often a category dedicated to minzu wu (ethnic dance), organized by sub-categories such as Tibetan, Mongolian, Miao (Hmong), and Uighur. The costumes of each sub-category reference key elements of traditional dress from each minority nationality, such as elaborate silver headdresses for Miao outfits and cowboy hats for Mongolian ones. 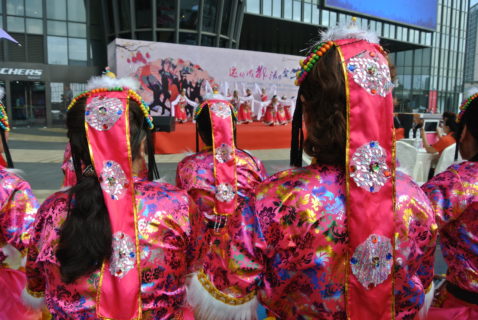 Competitions like these have been taking place in China’s urban centers since the early 2000s, when retired and aging women as well as some men began dancing together in informal groups in the aftermath of massive layoffs and early retirements stemming from China’s State-Owned Enterprise (SOE) reforms. The vast majority of dance group participants belong to China’s so-called “Lost Generation.” Many spent their youths surviving the brutal excesses of Mao Zedong’s political campaigns. Then, decades later when China was transforming into the world’s second largest economy, they were squeezed out of their jobs to make way for younger workers. By the 2015, there were over 100 million participants throughout China. They crowded parks and sidewalks, leading city residents to complain about the noise from the dancers’ music. As part of their larger efforts to regulate the burgeoning phenomenon, municipal and provincial governments began organizing competitions in order to bring the groups under official control. Today, publicly sponsored dance competitions between groups of retirees occur regularly in Chinese cities.

Dance group participants have no say in what to perform during competitions; selected pieces range from patriotic Chinese numbers to contemporary pop performances, all set to official choreography. That said, the fact that organizers chose Kangding Qingge is neither an accident nor an anomaly. I attended over 20 competitions during my fieldwork and “ethnic minority” dances featured in more than half of them. Tibetan dances were by far the most common, but there were also two Miao dances and a wintertime competition where groups performed a Uighur dance while wearing costumes trimmed with faux fur.

Identifying, categorizing, and codifying ethnic groups was one of the new Communist government’s first projects after the founding of the People’s Republic in 1949. China now officially recognizes 56 ethnic groups including the majority Han. Since 1949, displays of national unity have prominently featured popular understandings of minority groups’ cultural heritage. While the state exerts tight controls over minority populations’ expressions of their own cultural practices, performances of minority songs and dances make regular appearances on state-run television programs. The idea that China is composed of 56 distinct but harmoniously co-existing ethnic groups remains a foundational tenet of the modern state. Nowhere was this more prominently displayed than during the opening ceremony of the 2008 Olympics, when 56 schoolchildren representing the 56 ethnic groups carried the Chinese flag into the stadium while wearing versions of traditional attire.

Dance competitions may lack the grandeur of these official spectacles, but the presence of state agendas is no less apparent. Competitions are invariably judged by a panel of government officials, sometimes with input from a professional dancer or choreographer. At the Kangding Qingge competition, the most senior official present was the district deputy party secretary, a visibly bored man in his 50s who struggled to conceal his lack of interest in the performances. For government representatives like him, dance competitions are public events where ideals—about active aging, the preservation of cultural traditions, and the existence of a unified multi-ethnic Chinese nation—can be communicated to the masses. At the conclusion of the Kangding Qingge competition, another local official gave a rousing speech on the beauty of Tibetan culture and exhorted the performers to work harder to perfect their routines in the future.

For the retired dancers, on the other hand, performing onstage in brightly-colored, attention-grabbing costumes offers a chance to be noticed again after a lifetime of being overlooked. Despite their shoddy construction and cheap materials, the costumes have an ostentatious beauty that is normally deemed immodest for retired women but is sanctioned during performance events such as these dance competitions. My 61-year-old friend Qiu, whom I met while conducting participant observation with a dance group, immediately named the outfits when I asked what she enjoyed most about the competitions. She said she loved the outfits for their brightness, and for the way they popped in photographs. “At our age,” she explained, “the only way to add color to our appearance is with clothing.” If the cultural insensitivity of the costumes ever gave them pause, the dancers did not voice it. After all, they would be just as happy performing a folk Chinese dance in traditional Han clothing. After the event concluded, the women gathered on the stage to pose for photos, taking care to display the colorful skirts and bright embroidery. For these retirees, dance competitions are performances of visibility.

Dance competitions that showcase happy elders dancing in Tibetan dress must be understood within this broader tradition of staging national and ethnic harmony. The boundaries of the modern Chinese state are asserted through this highly visible and officially sanctioned cultural phenomenon to emerge in recent years. At a time when scholars are (rightly) paying attention to the ways that the Chinese state manages minority cultures through economic incentives, intimidation, and force, we must also understand how majority attitudes toward minority groups are shaped and maintained through everyday events. The dancers may not even be aware that they are acting out a political narrative, but this is how dance competitions effectively mask underlying social tensions. The state and the dancers have their own agendas, but for a few brief hours, these dual performances converge onstage in aesthetic—if not ideological—harmony.

Claudia Huang is a doctoral candidate at UCLA. Her research interests include aging and retirement, kinship and families, and state-society relations. She will be joining the faculty of the Department of Human Development at California State University, Long Beach in fall 2019.