Studying Old Age and Practicing It

Navigating the frontier of aging in Japan and the United States.

Aging is a universal experience. When I moved to the United States from Japan in 1976, however, I encountered it as something “exotic.” My roommates’ negative comments on my octogenarian friend—”he’d be happier dead,” “I would commit suicide before I become old, frail, and ugly”—were so different from normal Japanese responses to elders that they gave me a culture shock. But their comments also spurred my curiosity about older Americans who, unlike elders in Japan, had disappeared from my life. Some years later, in 1987–1988, I carried out fieldwork for 18 months at a senior center in upstate New York, and continuous research over the next three decades culminated in my 2020 book, Through Japanese Eyes: Thirty Years of Studying Aging in America.

While nobody, regardless of their culture, welcomes age-related declines, Americans’ reactions to old age with loathing, fear, and denial made me realize that aging is both a biological and cultural phenomenon. Cultural prescriptions of eldercare in America differ significantly from those in Japan. Traditional Japanese culture prescribes the three-generation family and the Confucian ethic of filial piety, emphasizing intergenerational dependence. By contrast, American culture expects intergenerational autonomy and separate residences for parents and their adult children. This becomes problematic when Americans grow older and their self-sufficiency diminishes. Moreover, they face another challenge of complying with the cherished American value of independence. One major focus of my research was to find out how the senior center participants dealt with this gap between the “is” and the “ought” of old age.

Several months after I started my research at the senior center, I began to realize that American values of independence, freedom of choice, and egalitarianism played an important role in guiding center participants’ actions even if they were unaware of it. Their quest for independence was particularly strong. How did they maintain their autonomy as their abilities to do so were decreasing?

Four women, facing away from the camera, are standing by folding chairs on a pavilion. Several onlooks are watching.
Credit: Yohko Tsuji 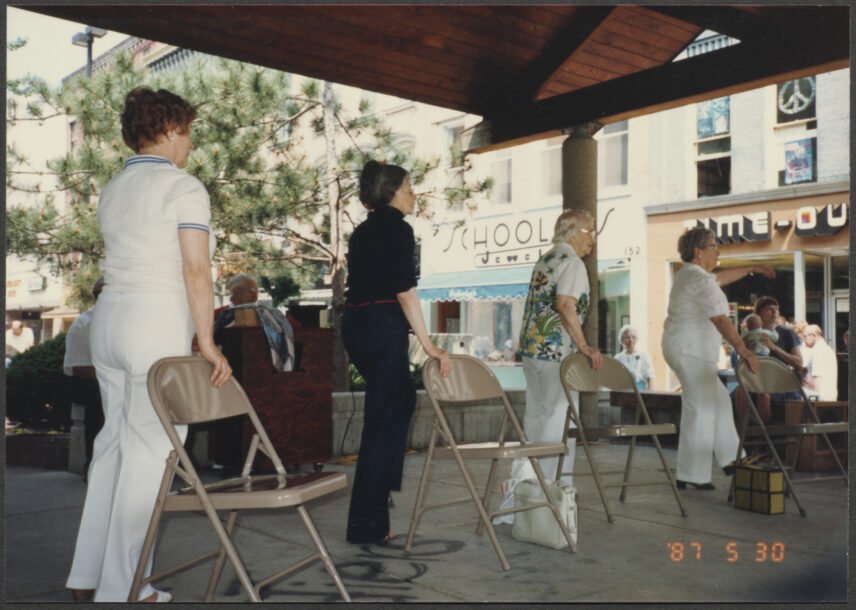 Forming support networks was one of their strategies. But did they have the resources to reciprocate in order to be equal partners? One solution was complementing each other’s missing abilities. For example, Diane drove while Helen did not. Therefore, Diane drove Helen to places where she could not walk to. To repay this favor, Helen walked for Diane, who had difficulty in walking, to pick up her prescription drugs and deposit her checks. Many seniors said they could not survive without their support partners. Yet, no matter how vital their support partners were, elders also tried hard to minimize their dependence by maximizing self-help, having multiple support networks to reduce their reliance on any one partner, and using institutional assistance, such as transportation services for the elderly.

Post-retirement housing also helped elders’ independence. I was struck by the multiple post-retirement changes of residence center people made because many Japanese men in my parents’ generation spent their entire life in one home and most women moved only once, to their husbands’ homes after marriage. Among 80 elders whose housing history I followed for two decades, all but seven made post-retirement moves, some as many as four times. The reasons for their moves varied⸺to be near children, to return home, to resolve feelings of restlessness. The general pattern, however, was to move for less maintenance and easier access to assistance, for example from a house to an age-mixed apartment, or from an age-mixed apartment to a senior apartment. In other words, until their decline necessitated a move to a nursing home, post-retirement changes of residence reflected elders’ wish to sustain their independence, though they would not explain their move in this manner, rather saying the house had become too big without children. For several elders, even a move to a nursing home offered the means of remaining an autonomous social being with unique personality and history by providing assistance for eating, dressing, bathing, and toileting. As one of these elders said, they did not move to a nursing home to die, but to live.

When I started my research at the senior center in 1987, I did not plan to continue it for the next three decades. But my husband’s long battle with cancer and eventual death did not allow me to pursue my career and kept me close to the senior center and my new friends there. This brought some unplanned benefits. 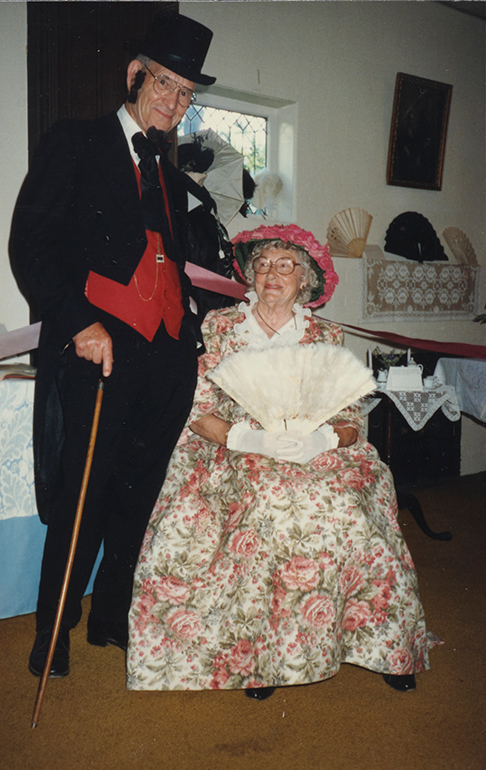 Most importantly, my longitudinal research enabled me to see the changes that had occurred in individual lives, as well as in the senior center and the culture of aging in American society. As of this writing, of the approximately 200 elders I came to know during my initial fieldwork, all but one has died. Some of those elders’ journeys to death, I was able to observe. The common denominator of the widely varied circumstances of their deaths was their awareness of terminal illness, and their determination to take charge of their death by planning their funeral, writing their obituary, reviewing their will, and so on.

Their deaths highlighted individualism. By contrast, in Japan the family is in charge and many patients are not even informed of their serious illness, such as cancer. This was the case for Emperor Hirohito, who died in 1988, as well as for my parents (my father died in 1992 and mother in 2013). Though more Japanese patients are given their cancer diagnosis today (my brother-in-law, for example, who died in 2021), the family continues to play a major role in dealing with eldercare, illnesses, and deaths.

Thirty years of research has also enabled me to witness the transformations in the culture of aging. A good example of this is the meaning of extrafamilial eldercare. Despite the American norm of intergenerational autonomy, some elders grew up in three-generation households with their grandparents. Their parents took care of their grandparents because the only alternative was sending them to the poor house for destitute or childless elders. In other words, extrafamilial eldercare involved shame. During the three decades of my research, many services and facilities became available for older Americans, including various types of housing, transportation services, and homecare services. Today, relying on extrafamilial eldercare is no longer shameful but one of several available options.

Like that of my colleagues, my research has brought personal gains together with academic discoveries. Elders’ knowledge and wisdom, which emerged from their lifelong experiences, not only enriched but also helped me, especially during my husband’s long battle with cancer and my adjustment to widowhood after his death. Center participants’ widely varied socioeconomic backgrounds exposed me to aspects of American culture I had not known before. Moreover, their reminiscences brought to life the local area’s past and residents, changing it to a real home for me as someone who had grown up in Japan. 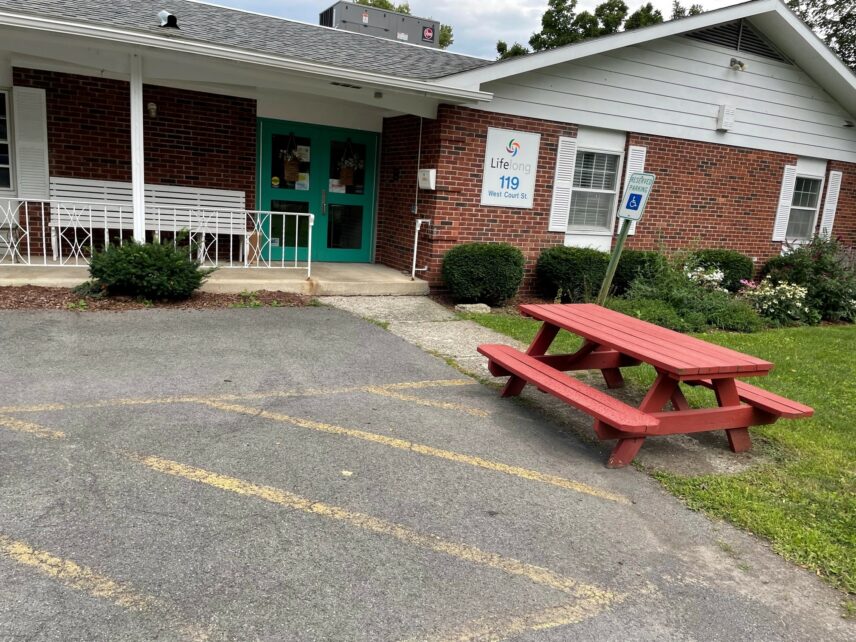 The senior center today (moved to this location in 1997).

My longitudinal research also turned out to be my personal journey, as I transformed from graduate student, whom elders nicknamed a young chicken, to senior citizen. Today, what I observed among elders three decades ago is my own daily experiences (of arthritis, for example, cataract problems, forgetfulness). In short, I am now “practicing” old age. What I learned from elders helps me to deal with my own aging. Without knowing the importance of housing in later years, for example, I would not have planned to move to a retirement home while I am still agile.

The literature on aging in America led me to regard American senescence as a frontier and older Americans as pioneers. Here, old age can indeed be compared to a frontier because, unlike in Japan, American culture does not provide “neat” models of aging. The fact that senescence represents the antithesis of American ideals makes the frontier of aging even more rugged. Older Americans are pioneers who navigate this frontier without “cultural maps.”

During my initial fieldwork, attendees of a group meeting were unanimous in the opinion that their old age was better than that of their parents because they enjoyed what the latter lacked: a steady income from social security and pensions, and material comforts such as hot running water and central heating. Yet growing old remains a frontier where elders are pioneers because of age-related declines and demographic as well as fast-paced socioeconomic, cultural, and technological changes. In today’s globalized world, these transformations are occurring everywhere. Japanese elders are now facing the new challenge of navigating the frontier of aging without adequate “cultural maps,” which used to offer three-generation family and filial piety.

During the three decades of my research, I never asked elders if they would regard old age as a frontier and themselves as pioneers. I wonder what their reply would be. Remembering their frequent utterance, “Life, you never know,” I conclude that they would say, “Of course, we are pioneers because life is a frontier with many challenges.”

Yohko Tsuji is an adjunct professor of anthropology at Cornell University. She conducted research on aging, death, mortuary rituals, families, and social change in the United States and Japan. She is currently writing a book, Temple Town Jōfukuji: A Japanese Neighborhood in Transformation.