Stuff Matters, Especially When You Risk “Everything” for It

Editor’s note: This piece is part of a SEAA column themed series “Cultural Consumption and Performance in Asia.” The articles highlight different aspects of consumption and performance in a range of Asian regions. They examine issues such as cultural curation, the uses of the past, material culture, power and market, as well as the enactment of lived experience.

Mrs. M. realized she had made a miscalculation by staying in her property on the afternoon of March 11, 2011, when water started bulging in through her floor. She had heard the official warning of the oncoming tsunami and knew that the evacuation order was serious. She had every intention of running to higher ground once she collected some belongings—and more importantly, once she found her cat.

She was ultimately caught in the tsunami. Unable to run anymore, her only option was to climb onto the roof and hope for the best. Her house was eventually lifted up by the tsunami and crashed into the roof of the neighboring concrete building. There, she spent the night listening to the waves coming and going. She never found her cat, but she managed to salvage some items, including her wedding dress, from the wreckage of her house the next day.

Mrs. M.’s story was only one of many I heard in the Northeast (Tōhoku) region of Japan in 2015 and 2016, several years after the 2011 earthquake and tsunami. I conducted fieldwork in the coastal towns of Miyagi Prefecture, the region hardest hit by the disasters in terms of human and material losses (Kazama and Noda 2012). I met local residents with first-hand experience of the disaster, new arrivals who had moved into these towns after the disaster, civil society leaders, and local government workers. My aim was to understand how these local communities perceived recovery in the Tōhoku region and how their experiences can help elucidate the gap between theory and practice in decentralized community-based approaches to recovery (Sou 2018, Davidson et. al. 2006).

My purpose was not to focus on what exactly happened on March 11, 2011, but I soon realized that hearing stories about survival was inevitable. At the beginning, the actions of those who ran towards danger seemed irrational and even crazy to me. But the more I listened to people’s experiences, the more I became aware of the underlying multilayered relationship they had with the things they tried to salvage despite the oncoming danger. Though anecdotal in character, these stories revealed how people’s relationship to their material possessions had informed, and to a degree controlled, their actions in the face of danger. 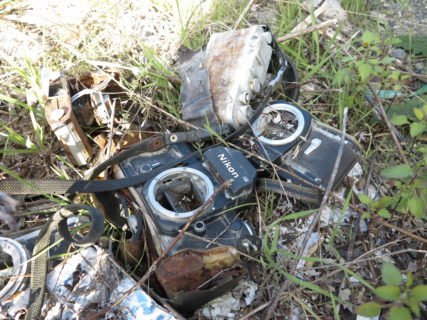 Personal belongings found in the foundations of houses that were washed into the sea, Ishinomaki 2016. Anna Vainio

The rationality of emergency preparedness often pits material life as irrelevant and replaceable in comparison to biological life. Consider any fire or emergency training you may have taken part in the past. The most common instruction is to leave the building without collecting your belongings. Yet how many of us fully heed this advice? Although we are told to discard stuff in emergencies, Mrs. M.’s experience shows that material life presents complications to the protection of biological life. The survivors’ actions went against the narrow understanding of risk that is presented to us on the premise for rational behavior: protect your biological life above everything else.

In post-disaster recovery, the material world gains intensified importance. Our attention is drawn almost exclusively to the physical rebuilding of habitats. Despite the Japanese government’s commitment to community-based recovery and social revitalization, their expenditure and progress reports focus on material recovery. This was also apparent on the local level, where public displays in community meetings and reconstruction documents (e.g., Minamisanriku Reconstruction Plan) heavily emphasize material reconstruction. While rebuilding homes and livelihoods is vital, people’s dissatisfaction toward its speed, direction, and the motivations of reconstruction are consistently present in most post-disaster contexts. The Tōhoku region was no exception. This was also apparent in my own research, where I witnessed the majority of conflicts and debates between the authorities and the locals to revolve around physical rebuilding. 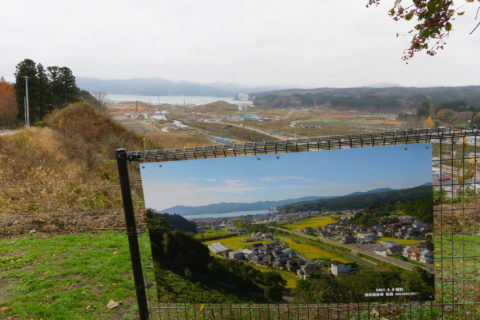 Overlooking Minamisanriku in 2015, image of the town from the same location taken in 2007 in the foreground. Anna Vainio

As a post-disaster ethnographer, it is easy to point to the excessive attention paid to physical rebuilding by planners, politicians, NGOs, and other experts in post-disaster contexts, and criticize their lack of consideration toward social relationships and the lived experience of victims as the foundation for recovery. Anthropologists tend to regard objects through human motivations and the meanings we apply to them (Appadurai 1986), but we often forget that people and their identities are constructed as much by the material world as the material world reflects the identities we hold (Miller 2010).

While the functionality and safety of parks, buildings, and roads in a recovering space are important issues, we need to accept that social relationships between people are born and transformed through interactions with and attachments to space and things. Just like one’s life is more than the physical body in an emergency, a home is not merely a roof over one’s head but also the feeling of being at home underneath it. Spaces, buildings, and personal belongings (ranging from mundane everyday objects to cherished mementos) gain and shape meanings through the interactions we have with them on multiple levels. Attention to either the biological or the material world is therefore irrelevant unless we understand the meaning of such interactions.

Disasters can provide unique opportunities for re-examining this connection between material and biological life that appears to be underestimated by the modern disaster preparedness and post-disaster recovery processes. The neoliberalization of disaster recovery has given rise to a reductive understanding of the relationship between the material and biological worlds (Klein 2007; Barrios 2017), in which the aesthetics, styles, functions, and sociality of a space is often designed to facilitate the circulation of capital (Barrios 2017). But the connection between the material and biological worlds is much broader. When I spoke with the residents of the Tōhoku region, it became clear that they felt suspended in the recovery period, neither being in the past nor in the expected future. In this state of waiting, their salvaged personal belongings, natural landscapes, survived buildings, and neighborhoods provided contact points for articulating hope, anticipation, memories, belonging, and identities within an environment of uncertainty.

They were looking for a sense of ochitsuku—“to settle into place”—in an environment that was constantly changing. For Mrs. M., the wedding dress that “continues to survive with her” gave her a sense of place, belonging, and connection with a past is now lost. Another local resident, when reflecting on the need to persevere (gaman) in temporary housing for another year or two, dreamed of the moment when he can finally stretch his legs in a full-sized bathtub (furō) in his new house. Yet another resident looked forward to the day when she could return to her small fishing community, nestled between the cliffs and feel the wind from the sea on her skin again. In this context, interactions with the material world, whether real or imagined, provided people with contact points that helped them weave their past, present, and future together. The disaster would become a more fluid part of their personal and communal history, rather than an abrupt traumatic moment that wiped away everything they knew and put their lives on hold.

Yet, many residents saw the reconstruction process as removed from their daily existence and something that was “done to them.” They felt that the authorities could not “understand how we feel.” Official recovery measures did not offer them a chance to connect with their new material environments and the habitats that were emerging from the wreckage, leaving them unable to “settle into place” within the new townscape.

Despite today’s “best practice” of post-disaster recovery that uses the language of empowerment, localism, and agency for affected populations, this largely ignores the fundamental ways in which people develop meaning in their lives and for the future of their communities. Tim Ingold (2000) has critiqued the separation of cultural and natural lives in our understanding of how human societies relate to their material surroundings. In recovery practice too, understanding the interaction between the biological and material is paramount. Only then can a process for recovery be developed, one that responds to the social, cultural, and economic meanings fostering specific lifestyles through interactions between people and their material surroundings.

Anna Vainio is an anthropologist and doctoral researcher at the School of East Asian Studies at the University of Sheffield. She explores the gap between theory and practice in community-based approaches to disaster recovery, by focusing on the affective, social, and political experiences of recovery in the aftermath of 3/11.