Timelessness is cruel because it is dehumanizing. As a mad anthropologist who researches madness, I have spent considerable time tackling timelessness. Timelessness is the name I have given to a phenomenon many researchers have witnessed among people experiencing madness—a broad experience of extranormativity that is predominantly defined and addressed as mental illness in the United States. I, however, follow the system-critical/rejecting footsteps of my fellow Mad Studiers (see Beresford and Russo 2016 and Gillis 2015).

Erving Goffman (1961) noticed that total institutionalization disintegrated the experience of time. In asylum life, little began, ended, or changed, so in set an apathy that atrophied any remaining strengths. Then came de-institutionalization—a laughable term, as the closing of single-purpose institutions only meant that the institutions interfacing with madness dispersed (prisons, community health agencies, hospitals, group homes, homeless shelters, etc.). After this shift, Robert Desjarlais (1994) encountered people experiencing madness and homelessness who didn’t experience life at all. Without the structure (beginnings, endings, changes) of social and economic participation, time collapsed on itself such that they merely “struggled along” without accumulating things that felt like “experiences,” or even memories. And although Bruce O’Neill’s The Space of Boredom focuses on homelessness and not madness, his theorization of boredom inspired my reflections on timelessness. Boredom, in O’Neill’s view, is a pervasive sense of being left behind in an increasingly globalized capitalist world where all sociality is filtered through consumption. Thus conceived, boredom is not a term to use lightly, and it is very different from the boredom of the under-stimulated privileged.

From the position of unending impoverished left-behind-ness—be that the result of a dramatically collapsing economy (as in O’Neill’s case), or the everyday exclusion that comes with experiencing disability and madness in a neoliberal-ableist society that oppresses people based on their in/ability to produce, accumulate, and consume (Runswick-Cole, Lawthom and Goodley 2016)—boredom is “something chronic (rather than passing) and cruel (rather than petty)” (O’Neill 2017, 15–16). It is a cruel boredom that never passes: timelessness.

Timelessness is cruel because it is dehumanizing. Victor Frankl was a Holocaust survivor and psychiatrist. He is also an intellectual ancestor to those who (like me) believe that much modern madness is existential, created and worsened by the conditions of capitalism that make purpose hard to come by while simultaneously barraging the senses with violent oppression. In Man’s Search for Meaning, he connected concentration camp life to unemployment, emphasizing the dehumanizing consequences of having no purpose or sense of time passing. 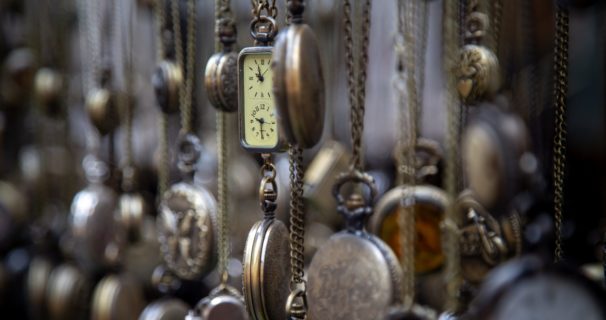 Frankl noted that most prisoners lacked the ability to “see the end of [their] ‘provisional existence’” or “live for the future,” and connected this to research on unemployed miners who “suffer from a peculiar sort of deformed time [as] a result of their unemployed state” (1984, 79). In poignant detail, he then described the resulting sense of timelessness in Auschwitz: “In camp, a small time unit, a day, for example, filled with hourly tortures and fatigue, appeared endless. A larger time unit, perhaps a week, seemed to pass very quickly… a day lasted longer than a week” (1984, 79). Like others without means to live for the future, people experiencing madness on the fringe of a neoliberal-ableist society often experience timelessness, where days can seem longer than weeks.

Timelessness is the endless nothingness that happens when you are world-weathered enough to be deemed defective (too mad, old, sick, poor) and banished to an invisible fringe, and though the center is fast-paced. And everyone is, like, so busy right now, you aren’t busy—you can’t remember the last thing you did—and for you, a good day isn’t a day when something good happens, but a day when nothing memorable happens, since most memorable things that happen are bad. It is a ravaging non-experience that, as Goffman revealed decades ago, worsens whatever reason society had for excluding you. Yes, to make matters more incensing, timelessness occurs under a “current regime of neoliberal, white-supremacist, imperial-capitalist, cis-hetero-patriarchy” (Hedva 2016) that makes people mad/sick/poor to begin with, and simultaneously creates conditions in which madness/sickness/poorness can only worsen.

Under this regime, four years ago I began an ethnography of madness in a Michigan Clubhouse. Clubhouses are non-clinical rehabilitation programs that employ work and community building in order to meet the recovery goals of their membership, who are, in Michigan, primarily impoverished people with psychiatric disabilities. I was initially attracted to the Clubhouse for a peculiar reason: I saw swaths of people I felt shouldn’t be OK but were. In fact, at the time of first contact, the people I met there were more OK than I was. That was when I could still taste timelessness, having just ascended a long stretch of madness after a life upheaval that had rendered me devoid of both community and structured daily activity.

In the three years I was there (first as hapless volunteer, then social work intern, then ethnographer), I heard countless tales of timelessness. One member in particular—whose story features prominently in my first article—inspired deep thought on timelessness.

Andy was a jovial optimist who ran the Clubhouse snack shop. In our interview, he repeated the “magic word, structure,” and reiterated that “I gotta keep busy and structured. When I’m a bad boy that’s when I’m not active enough.” His notion of bad intrigued me. From what I understood—and related to—Andy believed that languishing alone, “only leaving my room when nature called” and “doing nothing of value,” was bad. Not only did it feel bad—lonely, boring (“before the Clubhouse I was bored, inactive, and unproductive”) and endless—it made you bad.

Like any canon-savvy budding anthropologist, the fact that Andy and I had both grown up in cultures that, for complex Protestant ethic-y reasons, socialize people to associate productive with good/moral and unproductive with bad/immoral, did not escape me. Although that was upsetting to realize, it did not make Andy’s (or my) yearning for structured activity invalid. The subjective awfulness of timelessness, as the experiential opposite of structured activity, makes it perfectly reasonable to want to be busy. Even if being busy means buying into oppressive ideology that conflates busy-ness, value, and productivity, with having a job.

In Andy’s view, a job is self-evidently the best way to keep busy and be good, and this idea is shared and promoted by the Clubhouse. Clubhouses have a twofold aim when it comes to employment. First and fundamentally, Clubhouses welcome members into the bustle, where they are mobilized and supported in working at the Clubhouse alongside staff and other members. In the Clubhouse I worked in, this meant clerical, custodial, or culinary tasks. The community needs to eat, administrative work needs to be done, toilets need to be cleaned, and the sense of community need is what makes the work feel meaningful. Secondarily, this work is viewed as a stepping stone to other vocational goals. The ideal member uses Clubhouse work to stretch their long-atrophied structured activity muscles, and with support (i.e., resumés and applications) ultimately gets a job. When I interviewed Andy, he was working a transitional employment position at Old Navy, and feeling happier than he remembered feeling in years.

About Andy’s story, I feel conflicted: I am happy for his happiness. But I resent the conditions—the “current regime of neoliberal, white-supremacist, imperial-capitalist, cis-hetero-patriarchy” (Hedva 2016)—that make it possible for someone to view minimum wage work for an exploitative corporation success. I resent the conditions that made Andy feel bad because he was sick, and that played a significant role in making him—a poor, black veteran—sick to begin with.

About Clubhouses, I feel equally conflicted: I am grateful for Clubhouses. I tackle timelessness intellectually, but Clubhouses tackle timelessness tangibly by providing a place people can go to be busy and build community. And people need things to do and people to see; were this not so, timelessness and loneliness wouldn’t be the dehumanizing phenomena that they are. As I said earlier, because of Clubhouses, swaths of people who otherwise would not be OK (i.e., would not have their needs for purpose and belonging met), are OK. But again, I resent the conditions—the “current regime of neoliberal, white-supremacist, imperial-capitalist, cis-hetero-patriarchy” (Hedva 2016)—that make Clubhouses promote and facilitate people’s reintegration into the same old myth of a good life, one in which a job is the pinnacle of success.

But this is the world, and if there is a way to decouple a narrowly-defined productivity with goodness, I have not yet found it. And I am really searching, because of all the sufferings I have known, I fear timelessness the most.

Laura Yakas recently completed her PhD in anthropology and social work at the University of Michigan. Her research focuses broadly on healing under oppression, and specifically the oppression of people diagnosed as mentally ill. She believes mental illness is primarily a social justice issue, secondarily (if at all) a medical one.