Ten Things about Truth and Responsibility

Published in the November/December 2021 issue titled, “Truth and Responsibility”

1) To think about truth and responsibility is to ask to which collectivities we belong, and to whom we owe our responsibility. In the closing of her article “The Boundaries of the ‘We’: Cruelty, Responsibility and Forms of Life,” Veena Das writes, “Our responsibility to the present, when we live in such unjust societies and feel helplessly compromised by the shame we feel, may well lie in open acceptance of such a life without turning it into the useless grumblings that sometimes pass for criticism.” Das draws attention to how the state proliferates violence in collusion with willing citizens, and she urges a clear-eyed understanding that no one can live “a blameless life.” Our responsibility to ourselves and to others begins with a commitment to accepting this truth—and appreciating the collectivities with whom a “we” is formed. With respect to being compromised by shame, Bianca Williams writes that shame is a barrier to achieving responsibility, and radical honesty might serve as one strategy for challenging racist institutions.

2) Technology will not save us. Or rather, it will not present us with the truth for which we hunger, nor will it grant us a clear pathway to where our responsibility lies. Algorithms, DNA fingerprinting, body cameras, surveillance videos, and any other number of predictive or forensic technologies may provide some insight, but for every piece of evidence produced through these means, there are interpretations, contestations, and the overwhelming power of carceral logics. How many Black men and women have we watched die collectively as a nation? How far have those videos and images traveled, circling the globe in endless loops of state killing? How many images and angles and videos of George Floyd’s death or Ma’khia Bryant’s death have been circulated? How many men, women, and children witnessed these deaths, and sought to prevent them, calling out the officers on the scene to cease their brutal extinguishing of Floyd’s and Bryant’s lives? Why are their testimonies and experiences subordinate to videos and images? These questions ask us to consider the spectacle of the trial and the technologies it reifies. The trial itself invites consideration of the harm that has befallen the communities who are recruited to testify, to whom our responsibilities are still unclear, and for whom there is often still no repair. Technology does not ask us who we are, to whom we belong, and to whom we owe our responsibility.

3) Participation in truth-seeking exercises requires knowledge of the self. “If you are true, but not in the same truth with me, cleave to your companions; I will seek my own,” wrote Ralph Waldo Emerson in “Self-Reliance.” Emerson’s theme in this essay is easily glossed as promoting individualism, but one does not have to read Emerson as promoting the individual at the expense of the collective, for he offers to turn away from one set of companions to another. Mark Cladis explains that Emerson’s self-reliance can only be achieved if “we are surrounded by helps and aids of all kinds, supporting us, sustaining us, journeying always with us” and suggests that Emerson is well aware of these collectivities and kin relations. Another way to consider Emerson’s musing on truth and responsibility in this essay is that truth seeking begins with responsibility to oneself, and understanding of who supports, sustains, and journeys with the self.

4) Truth and responsibility are fundamentally about our relationships. In reflecting on her participation in the 2018 AAA Annual Meeting in the midst of devastating fires and ongoing planet-wide crisis, Zoe Todd models her disposition to truth and to responsibility as mediated through her self-knowledge and recognition of the collectivities with which she dwells in reciprocal relations. By examining the ways in which her life was not blameless, Todd explains her goals of “trying to be in good relation with the territories I currently occupy, trying to honour my obligations to lands/waters/atmospheres back home, and trying to teach next generations of students to work reciprocally and thoughtfully through their positions in the world.” Todd is unstintingly honest in her assertion that her (and our) professional discipline does not allow us to properly honor our obligations to lands/waters/atmospheres. Instead, anthropology takes on the settler colonial logics of disciplining places rather than striving to be in right relations with the places we inhabit.

5) Anthropology’s struggles to achieve truth and fulfill our responsibilities, particularly in the United States, has too often fallen back on institutional processes that mimic juridical forms. Rather than focus on approaches that prioritize self-knowledge and cultivating relationships, we are enamored with the courts as an ideal model for how we should seek truth in day-to-day life. Our confidence in courts persists under the misguided sense that what happens there is reparative and sustains collectivities and kinship, rather than destroying and fragmenting them (see Hlavka and Mulla 2021 for ethnographic descriptions of instances in which guilty verdicts lead to loss of household income and increased precarity for the lives of victims of violence). Here is a comedically recursive figure: while we clamor for “due process” on social media, at home, at work, and on campuses, the US courts instruct jurors to draw on their quotidian sensibilities. “In daily life, you rely on your common sense to decide whether someone you are speaking with is telling you the truth. You must use this same sensibility in listening to witness testimony determining whether it is true or false.”

An illustration of a woman with brown skin and dark, wavy hair wearing oblong-shaped glasses and blue frames. She wears golden drop earrings in the shape of scales. Her black blouse is covered with a white butterfly and a pattern of flowers—small pink and yellow flowers, larger white flowers—and their green stems, some of which appear to grow up into her hair and just above her left shoulder. A second white butterfly hovers above her right shoulder.
Credit: Charlotte Corden 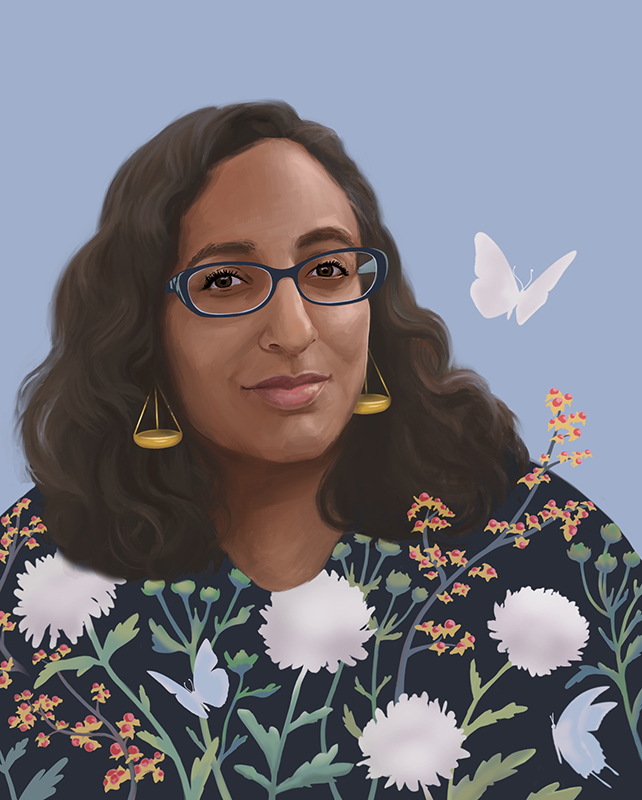 6) Truth commissions have emerged as another institutional form that also partially mimics the juridical. While these efforts often draw on the authority and resources of the state, they produce a narrow plane upon which truths can emerge. Anthropologists have examined many recent efforts to publicly excavate painful truths in the formalized process of the truth commission. The modern form of the truth commission is one that can delimit the extent of responsibility. It can, for example, make the emergence of truth conditional on immunity from prosecution as in the case of the South African Truth and Reconciliation Commission (TRC) (see Wilson 2001). It can also delimit the collectivities who will be legible to the state.

7) Truth commissions have also notoriously marginalized, excluded, or homogenized the voices of many. Turning back to the South African TRC, in her work with South African youths who mobilized during the anti-apartheid struggle, Pamela Reynolds wrote that we “excuse ourselves from knowing the consequences for the young of war and oppression and from acknowledging the profundity of their understanding and the courage in their engagement.” Also writing about the TRC, Fiona Ross has demonstrated the ways in which women’s narratives were selectively recorded to center sexual and gender-based harms while erasing the multi-faceted accounts of suffering and grief that women shared. It was as though a theft or the state-sponsored disappearance of a loved one had to be demoted with respect to sexual violence. If a truth commission can absolve us of responsibility to the young, can silence and mask their truths, and can only selectively hear about particular forms of harm that women have experienced, what forms of repair unfold in our collective futures?

8) Truth seeking and affirming our responsibility requires us to mobilize an understanding of political community, and to embody those relationships within political community. As we live in political community, we can easily fall into settler colonial logics that prune away particular sovereignties while centering whiteness. We may recognize those settler colonial sovereignties that obliterate, incapacitate, and undermine the sacred sovereignties through which we form community. Audra Simpson tells us that “the relationship between refusal and consent became the point to needle through and stitch with.” She describes living under a settler colonialist regime that does not recognize one’s own sovereignty while struggling for rights under these same logics. She adds, “the condition of Indigeneity globally is to know this. Indigenous peoples are grappling with the fiction of justice while pushing for justice.” Can we learn from this description of political life the importance of being truthful about truth-seeking processes?

9) The state can be an important participant in efforts to achieve truth and responsibility, but it is clearly also the perpetrator of great harm. Communities and collectivities have found many ways to live with one another following such fractures. Conciliatory practices need not derive their authority from the state, particularly when the state is one of the primary engineers of harm. In Peru, communities have participated in many events, movements, and forms of repair to reconcile postwar lives. People differentiate between forgiveness and reconciliation with nuance and care, and allow some to participate in arrepentimiento, while simultaneously mobilizing around conventional legal cases and navigating customary law (see Rojas-Perez 2017; Theidon 2012). There are lessons in the insistence on multiple and simultaneous avenues for truth and responsibility.

10) Everywhere we look, we see that in our habits, we are often stubbornly statist and corporate about truth and responsibility. We bind truth-seeking projects making them finite in space and time, and we limit what it means to be held responsible. But there are many examples, even anthropological ones, through which we can be attentive to our relationships, while understanding that responsibility to others is ongoing and perpetual. Rather than insist on an institutionalized or pseudo-juridical form, might we return to our deep lessons on reciprocity and gifting? We can, perhaps, ask ourselves to consider the radical potential in potlatches and Kula rings as models for cultivating relationships and self-knowledge, while centering truth and responsibility as collective projects of building the “we” to whom we are beholden that may require our energies, care, and attention far into unknown futures.

Charlotte Corden is an illustrator, artist, and ethnographer who is fascinated with the power of hand-drawn images to reveal and describe complex truths. Her first graphic nonfiction book, written by Alisse Waterston, is Light in Dark Times: The Human Search for Meaning (2020).

Sameena Mulla is acting associate professor in the Department of Women’s, Gender and Sexuality Studies at Emory University. She is the author of The Violence of Care: Rape Victims, Forensic Nurses and Sexual Assault Intervention, and Bodies in Evidence: Race, Gender, Science and Sexual Assault Adjudication, which she coauthored with Heather Hlavka.