Rebecca Wragg Sykes is an archaeologist and author of the critically acclaimed bestseller Kindred: Neanderthal Life, Love, Death and Art. An honorary fellow at the University of Liverpool, she is also a cofounder of TrowelBlazers, an online resource highlighting the role of women in archaeology and the earth sciences.

When they were first discovered in 1856, Neanderthals were a scientific sensation, and in many ways they’re still leaving us surprised and fascinated over 160 years later. Today, the field of ancient genetics has transformed our understanding of early human history and the Neanderthals, but archaeology has been undergoing its own quiet revolution. In the past three decades, advances in methods from excavation to analysis have painted a captivating fresh portrait of these, our closest relatives. Here are 10 things we’ve learned.

1. Neanderthals were survivors. Back in the 1850s, nobody was sure how long ago Neanderthals had lived, other than the fact they had existed alongside species now vanished from Europe, such as reindeer, and long-extinct beasts like woolly rhinoceros. Once means for directly dating archaeological sites were developed, the true chronology of Neanderthals became clear. They emerged as an anatomically distinctive population around 350,000 years ago, and what’s more, between that point and their vanishing from the record around 40,000 years ago, they survived six global climate cycles. Far from arctic environment specialists, they preferred to avoid extreme cold, and should equally be thought of as adapted to steppe-tundra, forest, and coasts, spreading all the way from Wales to Palestine, through into Central Asia and Siberia.

A woman with short, dark hair and glasses is wearing a blue turtleneck shirt. In the background, there is a cave opening that looks out onto green land with mountains and the sky on the horizon. Around the cave mouth are silhouettes of figures depicting Neanderthals. 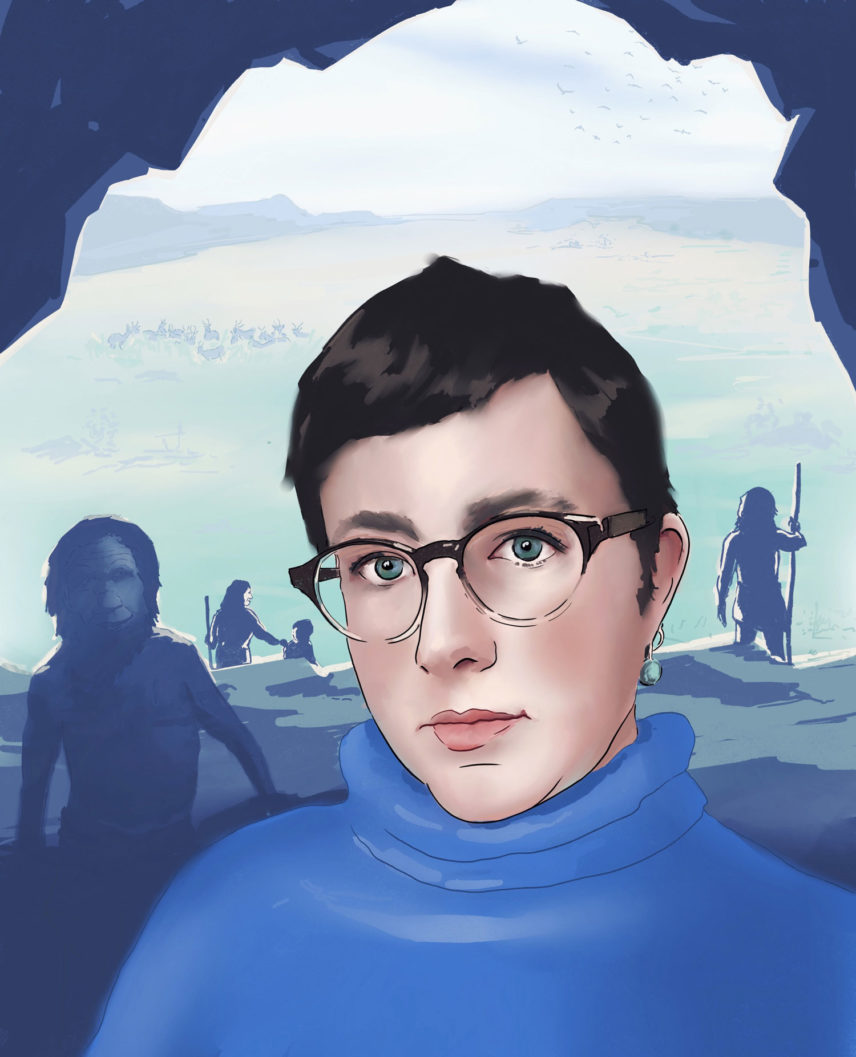 2. They weren’t stuck in a big game rut. Theories that perhaps Neanderthals vanished because they were poor hunters have abounded. Yet evidence from close study of animal bones, chemical analysis, and microremains in sediment or even their own dental calculus shows they were highly flexible in dietary terms. They took the best of whatever was in the environments around them. That included tackling megafauna like mammoth, medium-sized prey, such as deer, and even small game and shoreline resources. Mediterranean Neanderthals even had a particular way of roasting tortoise. But plants were also on the menu, whether tubers like waterlily roots or seeds and fruits, some of which needed cooking.

3. Neanderthals were artisans and innovators. Notions that Neanderthals were inherently unsophisticated and lived in a state of technological stasis persist. But careful study and new finds confirm they mastered many methods for taking apart stone, had varied cultures across time and space, and skillfully worked wood, shell, and even bone. Remarkably, they also produced the first synthetic material: birch tar. Neanderthals in what is today Italy, even invented another adhesive for multipart tools by mixing pine resin and beeswax.

4. Home was where the hearth is. Remarkable twenty-first century excavation methods allow us to pick apart Neanderthal living sites in mind-boggling detail. Archaeologists might only trowel away a few centimeters in a field season, but these can contain centuries of occupation. By recording the spatial positions in 3D, then digitally or manually refitting fragments of stone and bone back together, different sub-layers and activity areas can be identified. Sediment analysis reveals midden zones, multiphase hearth fires, and even the potential use of animal hide mats. It’s in Neanderthal sites that we see the emergence of human hearth-centered living.

5. Neanderthals talked to each other. Recent research shows that Neanderthal voice boxes could make similar sounds to ours, and their inner ears were tuned into the same frequencies: speech. But genetic studies suggest subtle differences, meaning that the cognitive foundation and expression underlying their language was not the same. What might they have talked about? Perhaps stone and seasons, animal and plant lore. Shared memories woven together may have become the first hearthside tales.

6. They lived in small populations (mostly). Modern archaeological research has picked away at one of the trickier problems in understanding Neanderthals: How many of them lived together? High resolution sites (where sediments accumulated slowly and short occupations can be discerned) confirm that groups likely contained no more than 20 individuals, and sometimes split up to go off into the landscape. But DNA shows that they weren’t all genetically inbred, and persistent long-distance stone movements point to territories covering hundreds of kilometers.

7. There was such a thing as Neanderthal aesthetics. A growing body of evidence supported by meticulous analysis indicates that Neanderthals sometimes engaged with materials in ways that have no clear function. This includes altering surfaces by carefully incising lines on bones and applying mineral pigments, sometimes mixed in recipes with other things like sparkly fool’s gold (iron pyrite). When we see pigments being used on unusual objects like fossil shells and raptor talons, it’s a strong indication that Neanderthals possessed a proto-aesthetic sense.

8. Aggression was not the basis of their society. Assumptions that Neanderthals were by nature violent are not reflected in their bones or the archaeology. Hunting must have been collaborative, and the spoils were systematically butchered and transported elsewhere to waiting mouths. In some places it’s even possible to see hints of resources being shared between hearths. Without intense competition over food, Neanderthal social groups were more likely based around close friendships, and perhaps open to meeting strangers.

9. Neanderthals had different ways of dealing with the dead. Debates over possible Neanderthal burials have existed since the early twentieth century, but a combination of revisting old collections and excavating new skeletons has today’s archaeologists homing in on two facts: First, it does appear that entire bodies were sometimes deposited, including in shallow pits. But even more interesting, Neanderthals were taking apart the bodies of the dead, sometimes consuming them even where food was abundant, and using bones as tools. In one case, incising a skull with more than 30 tiny lines that have no practical explanation.

10. We met them, many times. One of the greatest revolutions in our knowledge of Neanderthals—that they did not entirely vanish—came with the first sequencing of the Neanderthal genome in 2010. A decade on, archaeology has revealed greater complexity. Early Homo sapiens were in Eurasia well before 100,000 years ago (Australia by 65,000 years ago), and further DNA samples and genetic analyses reveal multiple phases of interbreeding over this huge span of time, not just with Neanderthals, but with other hominins, including the little-known Denisovans. So unlike many of the first H. sapiens explorers who left no DNA traces in people today, the Neanderthals’ bodies and way of life may have disappeared, but their genetic legacy lives on.

Rebecca Wragg Sykes is an archaeologist and author of the critically acclaimed bestseller Kindred: Neanderthal Life, Love, Death and Art. An honorary fellow at the University of Liverpool, she is also a cofounder of TrowelBlazers, an online resource highlighting the role of women in archaeology and the earth sciences.