Defecation is an act of human necessity. But is it really just waste, or might it be something more? It turns out that poop can tell us a great deal about the human past, challenges humanity faces at present, and opportunities for forging more livable futures.

1. In its most elemental form, excrement is a sign of life. That’s why hunters and trackers keep an eye out for scat—it’s indicative of a living presence. It provides clues to when and where an organism was active in an environment, and it presents direct evidence of their most recent meals. Ancient fossilized poop, known as coprolites, can offer valuable insights into the human past too. They can tell us about human diets, stressors, gut ecology, and adaptability to distinct environmental conditions. We might even think of coprolites as biological time capsules—rich in data, free of smell.

2. With the advent of agriculture, human bodily excreta became a resource for fertilization, sometimes known as night soil. From Amazonia to East Asia, human societies recognized that bodily wastes enriched soils and offered distinctive benefits for the cultivation of a broad suite of crops. In some cases, this usage may have been merely incidental, as horticulturalists took advantage of the heightened fertility of soils where human bodily contributions had been concentrated. In other cases, particularly in China and Japan, human poop became a valuable commodity that spurred the development of elaborate trading networks. The historian Yong Xue has argued that Jiangnan, the most prosperous region in early modern China, owed its remarkable rice harvests to intensive fertilization, which consisted in large part of urban night soil collected by rural farmers. An imperial agricultural treatise of the time reads: “The southerners accumulate nightsoil in pits. They treasure night soil as if it were gold… The northerners should follow Jiangnan’s example. Every household should collect nightsoil.” Night soil was so profitable that many rural farmers left agriculture to become full-time traders. Some night soil boats were even hijacked by pirates looking to profit off the brown gold. Filthy lucre, indeed.

3. In some circles, it is now known as humanure. Although the use of night soil took a significant downturn following industrialization and the invention of synthetic fertilizers—along with growing recognition of its role in disease transmission—it has experienced a minor renaissance recently. People living in permacultural communities, which seek to enact localized, regenerative forms of agriculture, literally take these matters into their own hands. Joe Jenkins, author of The Humanure Handbook, has been composting his own bodily excretions and those of his family for decades. While visiting him at his home in rural Pennsylvania, he told me that he’s deeply concerned that if human civilization faces major disruption or collapse, we’ll quickly be “mired in our own shit” and “thrown back into the Middle Ages.” He wants to reinvigorate and preserve knowledge of how to safely compost poop and return it to the soil. His self-published book—a bible for many permaculturalists—has now been translated into 17 languages. For communities living off the grid and seeking to assert greater control over their own lives, the production of humanure is also an expression of their desire for political, economic, and infrastructural independence.

4. The most recent incarnation of humanity’s evolving use of poop is known by the benign euphemism of biosolids. In contrast to night soil or humanure, biosolids are the end products of hydraulic sanitation systems and they undergo industrial treatment, which allows for the elimination of pathogens and the removal of heavy metals present in the waste stream. The resulting material is developed into many distinct products that are used in a variety of applications and contexts.

5. Biosolids composts are the most compelling products for home gardeners and landscapers. In my interviews with both wastewater treatment workers and biosolids users, they have emphasized that odors are a big barrier for gaining public acceptance of biosolids, but composting helps to minimize funky odors that can be off-putting to users and the communities where they live. Compost products thus help to reduce the “yuck factor” and are commonly used in urban gardens, golf courses, municipal sports fields, and urban landscaping. The City of Chicago, for example, has developed an EQ (exceptional quality) biosolids compost that is freely available to local residents, and it can even be delivered right to your home.

An illustrated poop emoji with eyes and a wide smile sits in a garden with rows of sprouts. Behind it are various vegetables, houses, and the sky.
Credit: Charlotte Corden 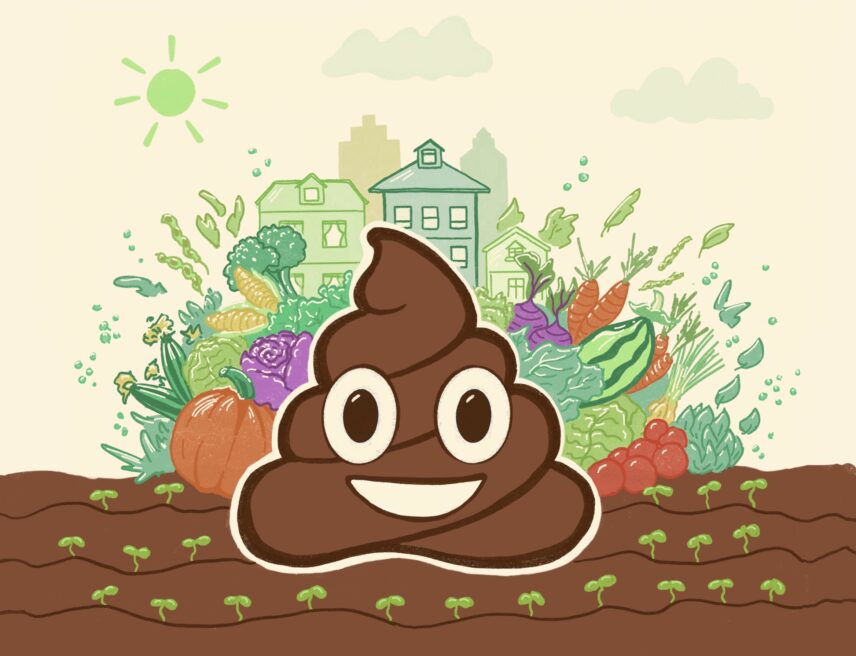 6. Biosolids can also serve as an alternative energy source. When fed into an anaerobic digester, the methane gas released from biosolids can be captured and then burned to produce heat or converted into electricity. Large digesters can feed energy back into the electric grid or even power the same wastewater treatment plants that produce biosolids. Small-scale household digesters, especially in rural communities, can also be implemented to provide natural gas for cooking stoves. In rural China, tens of millions of households are outfitted with biodigesters that do precisely this. An added benefit of biodigesters is that they help to reduce the release of methane, a major greenhouse gas, and thus play a role in climate change mitigation.

7. Biosolids are playing a growing part in ecological restoration too. In Ohio, degraded strip mine lands are being rehabilitated through the cultivation of hybrid poplar trees that are planted on top of large trenches where biosolids have been applied. As the trees grow, they draw nutrients from the biosolids while also breaking down the rocky ground, enabling the formation of topsoil on lands where it’s been completely removed. Over time, this will allow for the establishment of other species to revegetate the land. Similar restoration projects are taking place in other severely degraded landscapes, including slag heaps, brownfields, and other sites of industrial abandonment.

8. Sewage sludge is more than just a rich source of nutrients and organic matter—it’s becoming a new tool for public health monitoring. At the onset of the COVID-19 pandemic, some universities demonstrated that they could more quickly identify breakouts by monitoring wastewater from dormitories than by waiting to detect it from swabbing individual students. In addition to tracking community spread of viruses, sewage can also help to identify patterns in usage of controlled substances, such as fentanyl, and even assist in anticipating emerging crises.

9. As strange as it may sound, poop is now at the cutting edge of medicine. Although many common diseases are spread through feces, individuals suffering from debilitating infections by antibiotic-resistant bacteria like Clostridium difficile are being effectively treated with fecal transplants from healthy donors. Taken as an enema or in frozen pill form, these fecal microbiota transplantations repopulate the gut bacteria of the patient and can work to quickly counteract C. diff. In some cases, such interventions are lifesaving.

10. Finally, poop is the source material of a great deal of humor and entertainment. Cultural taboos and social anxieties surrounding bodily excreta have made poop the inspiration of many legendary family stories, comic routines, and NSFW online memes. But as taboos loosen around bodily shame, it has also taken on the status of pop culture curiosity, buoyed by the now ubiquitous poop emoji. Suddenly, it’s everywhere—kid’s birthday cakes, Play-Doh kits, garden planters, night lights, pillow covers, waffle makers, boxer shorts, and rainbow tights. Just as it’s good for a laugh, it seems that the proliferation of poop-themed products hints at a growing acceptance that feces is a fundamental presence in all our lives, and one we should warmly embrace.

Human waste has never really been just waste. But describing it in such terms does have important implications. When things are considered waste, they can be treated without concern or care, and those who are responsible for managing them are often treated the same. This is why recognition of our excrement as part of our broader ecologies, economies, cultures, and political collectives is just as necessary as the daily act itself. Significant challenges remain in how bodily excreta can be better managed as a resource—from contending with industrial pollutants present in biosolids to improving access to fecal microbiota transplantations—but before that can happen, we need to acknowledge the value of our bodily matter in the first place.

Illustrator bio: Charlotte Corden is an illustrator and fine artist whose work often centers around what it is to be human. She has an MA in anthropology from University College London and has studied at the London Fine Art Studios and the Arts Students League of New York.

Nicholas C. Kawa is an assistant professor in the Department of Anthropology at the Ohio State University. His most recent research investigates the promises and pitfalls of biosolids use in industrial agricultural production, urban gardening, and ecological restoration projects in the American Midwest.