Preservation and dissemination of data are at the heart of efforts to digitize and make accessible collections of legacy data from archaeological excavations.

Despite the vast amount of fieldwork that is conducted each year, reports and data are often filed away for safekeeping and remain inaccessible to those without the means to access this information. Artifacts and field records from early excavations were often dispersed among projects’ various stakeholders, a consequence of the collaborative efforts of archaeological projects. Although this facilitates public engagement across a wide geography, it hinders any potential research that might be conducted. Not only does research that involves travel to institutions require careful coordination, it also places a significant cost-related burden on the researcher, which can result in the desertion of a project by students and faculty members with limited time and funding opportunities.

Salmon Pueblo Archaeological Research Collection (SPARC) provides open access and downloadable data tables and original field records from the excavation of Salmon Pueblo, a great house community located approximately 45 miles north of Chaco Canyon in northwest New Mexico. The site was excavated in the 1970s under the direction of the late Cynthia Irwin-Williams, a project that produced over 100,000 pages of field records and 1.5 million artifacts and samples. The SPARC project was awarded a National Endowment for the Humanities grant in 2015, in order to make this enormous collection digitally accessible. SPARC is the resulting collaboration between scholars from multiple institutions, including the Salmon Ruins Museum, Archaeology Southwest, the Center for Digital Research in the Humanities at the University of Nebraska-Lincoln, and the Institute for Advanced Technology in the Humanities at the University of Virginia. The website, which launched in May 2018, includes an interactive map of the pueblo, a relational database incorporating 24 data tables, more than 11,000 images, and 35,000+ pages of original excavation documents. These archival documents—field notes, maps, drawings, field forms—can be viewed and downloaded via an IIIF Universal Viewer. I personally have benefited from the efforts of scholars who have made these massive collections of legacy data digitally accessible. My MA research at the University of Nebraska-Lincoln combines a material culture analysis of the shell ornament assemblage from Salmon Pueblo, including taxonomic identification and stylistic classification, with the use of digitized legacy data from SPARC. Despite public availability, a formal analysis of the shell artifacts recovered from the Salmon Pueblo site had not been completed, and thus provenience and stylistic information was somewhat lacking in the data tables provided by SPARC. Therefore, I decided to re-examine the shell artifacts and to conduct a formal analysis of the shell to explore themes such as the multivocality of landscapes, social memory, and the memorialization of people and places. My research, is not only based on prior publications, it incorporates the original field records. SPARC includes provenience information for the shell ornaments, which is available in both the artifact-ornaments and the select artifacts tables. By conducting a basic query, this data can be compared to the distributions of other artifact assemblages and supplemented with additional information from the units, features, and strata tables.

Within my brief research time at the Salmon Ruins Museum, I analyzed the temporal and spatial distribution of shell ornaments in particular spaces, such as great houses and kivas. Through a re-examination of field records, I learned the inhabitants of Salmon Pueblo placed crafted shell objects within six of the eight pilasters of the Tower Kiva—evidence of ceremonial activities, independent of social memory. Having access to these digital records allowed me to devote my brief time at the Salmon Ruins Museum to artifact analysis rather than poring through the physical archival copies. Using digital archives not only leads to a more comprehensive analysis, it is a win-win situation. I have recovered new information that will be accessible to SPARC users, which includes new shell species, giving us hints about the Salmon Pueblo inhabitants being involved in a vast marine shell network that included the Gulf of California and the southern Pacific coast of California. My own research thereby contributes to the ongoing collection of digital information, as the photographs and data I collected through examination of the shell ornaments have been shared with SPARC. 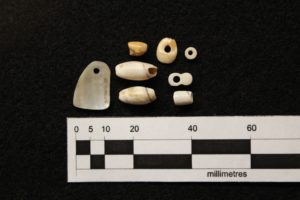 OpenContext and The Digital Archaeological Record (tDAR) have dedicated their efforts to preserving and broadening access to data. Other projects, such as the Chaco Research Archive (CRA), have built comprehensive databases that store records from multiple archival sources, providing access to data that is otherwise physically dispersed among several institutions. The most important contribution of SPARC and other digital repositories is their giving equal access to legacy data for students, scholars, and the public. Scholars and students now have immense troves of resources from which to extract data for research. No longer are archives languishing in file cabinets, untouched and inaccessible to the expanse of researchers who will never consult them; thanks to the surge in a digital-minded archaeology, these archives have been resuscitated.

Jade Robison graduated from the MA program at University of Nebraska-Lincoln and is a 2018 AD Student Membership Award winner.