The Invaluable Gift of Yoga

During a 2014 speech to the United Nations (UN) General Assembly, India’s prime minister, Narendra Modi, declared that yoga was an “invaluable gift” of India’s ancient traditions. Soon after, the UN, with the support of 177 member countries, passed a resolution to make June 21 the International Day of Yoga (IDY), a day to celebrate the health and wellness benefits of yoga practice. Each year’s theme (environmental protection and international peace, among others) highlights yet another way for yoga to benefit the world. Although a UN observance, IDY is one of the most unified and widespread of India’s international cultural engagements. Indian consulates, embassies, and diplomatic missions around the world host IDY events. In addition, other local organizations, Indian diasporic community groups, and Indian political groups hold their own celebrations. Free and open to the public, these events provide yoga and meditation instruction to attendees who gather on and around June 21. Indian embassies and foreign relations offices circulate photographs and videos from these worldwide events on social media, magnifying the audience of the celebrations.

India’s celebration of an invaluable gift to the world—an embodied practice that claims to cure a variety of ills relating to health, bad decisions, greed, violence, and more—is designed to mediate a positive transnational association with India that benefits India’s international standing. India’s International Day of Yoga events set up a particular embodied experience for participants, weaving together wellness, longevity, and happiness with a positive imaginary of India, its people, its leaders, and its traditions. In 2017 and 2018, I attended IDY events in several US cities to understand the learning experience organizers create at IDY events. I examined how participants (presenters and attendees) engage with India in these spaces. Although each IDY event was unique, they followed a similar format. The following is a description compiled from several events.

As I approach the event site, volunteers in white polo shirts greet incoming attendees and direct them to registration desks. Some wear saffron arm sashes, indicating affiliation with one of India’s political parties. I head toward a woman who checks my ticket and welcomes me to the event. In front of the building, there are booths with banners and representatives from yoga studios, temples, Indian community groups, and other spiritual organizations. Informational flyers and merchandise are spread on the tables, and members stand behind them ready to talk about membership and their organization, or to sell yoga mats, meditation classes, and Ayurvedic products. 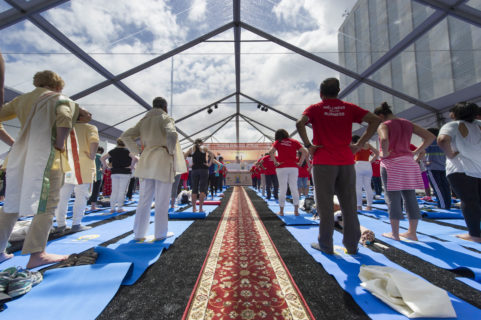 The event is held in an open gallery, community center, or outdoor field that has been cleared of everything but for a portable stage at one end and chairs around the edges. A screen onstage plays an educational video about yoga’s Indian origins and the wisdom of ancient Sanskrit texts. A large International Day of Yoga banner hangs below the raised stage, with the event logo on a saffron and white background. IDY’s logo shows the outline of a person seated cross-legged, their hands joined in front of their chest in the yoga pose namascar. The Washington, DC Indian Embassy website explains that each color and piece of this image has meaning, together symbolizing “harmony and peace.” India’s national flag flies to the side of the stage and around the room, further linking the events of the day with national participation.

As people file in, volunteers usher attendees to the front of the room to arrange themselves in geometric rows. They form a grid of yoga mats, family blankets, and a few towels. By the time the event starts, about 30 people are sitting facing the stage. More mill around the edges. By the middle of the four-hour event, there are over 100 participants. Attendees come from different demographic groups, and have different relationships to this embodied practice. Some are members of the Indian community, often families, including toddlers, grandparents, teenagers, and parents. Some are involved in the day’s events as volunteers, others follow the workshop instruction, and others sit, lie down, or wander about the room. There are young professionals of different ethnicities dressed in trendy workout attire, carting brightly colored yoga blocks and straps. Other attendees wear loose clothing and sit on well-worn mats. A man with long brown and greying hair pulled into a low ponytail maintains a committed focus throughout the event, affecting a seriousness of commitment to the sacred tradition.

Attendees are instructed to come to a “comfortable seat” on their mats, which most interpret as a cross-legged position. A few choose to kneel with their hands resting on knees, or sit with their legs stretched in front of them. Speeches are made by the Consul General or other important members of the local Indian community. The annual IDY message from India’s Prime Minister is read by a volunteer or member of the local consulate. The speaker lauds the wisdom of “our prime minister,” and then the workshops begin.

The four hours are split into sessions, each showcasing different aspects, styles, and practices of yoga, meditation, and Ayurveda. Members of the local chapter of the HSS (Hindu Swayamsevak Sangh), an international outgrowth of the RSS (Rashtriya Swayamsevak Sangh), India’s right-wing party that is currently in power, lead the crowd through the first session of postures, chants, and breathing exercises from the official protocol, a yearly guide to yoga to be followed as a part of all IDY events around the world. The protocol roots yoga in an ancient intellectual Indian past (at once Hindu and secular), and claims—or reclaims—yoga as an Indian tradition with worldwide appeal and benefits. In subsequent sessions, yoga specialists of South Asian and non-South Asian descent lead the crowd through meditation, breathing, and movement sequences.

In a recent speech, the president of India’s cultural relations office stated that “cultural relations pave the way for all other three [diplomatic, strategic, and economic] relationships, if not many more”. This use of cultural exchange as a foreign relations strategy employs Joseph Nye’s concept of soft power: that populations can be won over, attracted through their hearts and minds instead of military or economic force. Many assumptions pervade this strategy, but their explication is a task for another space. I use the previous description to open a conversation about how anthropological attention can help us understand the use of yoga in foreign relations, a strategy whose operation hinges on the mobilization of embodied experience to engender a positive familiarizing association with India as a national presence on the world stage.

If states consider cultural relations integral to their international engagements, perhaps anthropology, as a discipline that interrogates and complicates notions of culture, power, and capital, can facilitate broader understanding of these state strategies and the place of people within them.

The International Day of Yoga events lead ethnically and racially diverse people around the world through the embodiment of a practice claimed by India, assuming these experiences shape the decisions of citizens with political power. The strategy creates political subjects beyond the borders of the nation and highlights the importance of embodied citizenship. Just as the gift of yoga may benefit the wellness of people around the world, it is simultaneously an asset to India’s ability to negotiate its standing transnationally. India’s Ministry of Ayurveda, Yoga, Unani, Siddha and Homeopathy (AYUSH) has spent between 2.9 and 5 million US dollars annually on International Day of Yoga Celebrations around the world, a figure that does not include the significant contributions of other government sources, NGOs, and community organizations around the world. Ethnographic attention to cultural engagements like IDY illuminate the significance of human embodied experience in a state’s navigation of international relations. From such contexts we can investigate the mechanisms though which states, in this case India, use cultural heritage to cultivate positive associations of the nation by assigning particular meanings, roots, and values to an embodied practice. My current research continues to investigate precisely what participants learn from Indian cultural exchange events like IDY, and what international political power these programs generate, or are assumed to achieve.

Nicole Cox is a doctoral candidate in anthropology at University of Illinois, Urbana-Champaign. She is the recipient of the 2017 CSAS Graduate Paper Prize, and is currently conducting dissertation research on Indian dance exchange programs in India, Fiji and the UK.