The Joy of Dialects

What a froggy mystery in Papua New Guinea can teach us about the pleasure and power of language diversity.

Polopuak—frog. Since 2010, I have been working with Kala speakers in six coastal villages in the Morobe province of Papua New Guinea to document and revitalize their language. In 2010, I’d learned this word, polopuak, as the word for frog in the most northerly of the four Kala dialects, spoken in Manindala village. This struck me as unusual because the four dialects of Kala transition between each other in predictable ways. For example, the word for turtle in the most southern Kala villages (Kui, Alẽso, and Kamiali) is do, it’s zo in the next village north (Apoze), za in the next one (Lambu), and sa in Manindala. Something was amiss when we compared the word for frog between the villages: diŋgolẽ, ziŋgolẽ, zuŋgolẽ, polopuak—huh?

Language shift from Kala to Tok Pisin, the national lingua franca, is occurring in all of the Kala villages, but the Tok Pisin word for frog is rokrok. I put the mystery of polopuak down as a possible borrowing from another language spoken close by, such as Jabêm—a relative of Kala, and another popular lingua franca due to its use as a language of the church and of education for many years (Paris 2012).

Imagine my surprise when nine years later, I was standing in front of a decrepit blackboard in a Luthern church in Manindala, when one of our community partners wrote the word soŋgoleŋ on the board and described this as a large green frog that lives in trees! I immediately broke into a grin; I’d found the lost frog! I started asking questions, “I thought polopuak was frog, how is this different?” And lo and behold, a polopuak is a small frog that often lives in or near swamps. This was yet another moment that showed me and my colleagues, John Wagner (an environmental anthropologist) and Kenneth Longenecker (a marine biologist), the amount of environmental knowledge that is embedded within Kala specifically and within Indigenous languages more generally.

I was in that church in Manindala in May 2019 to lead a modified Rapid Word Collection workshop, which is one piece of our larger National Science Foundation-funded project, “Documentation of the Kala Language through an Interdisciplinary, Community-Based Study of the Aquatic Environment.” As the project nears completion, we are aiming to produce an expanded dictionary, a pedagogical grammar, and an environmental encyclopedia focusing on freshwater and marine environments. We held the workshops in every village and focused on collecting words related to the semantic domains of Ta (marine) and Alẽ (freshwater). From the outset, our community partners have emphasized Kala Walo Nuã (literally, Kala Mouth One), the idea that even though there are four dialects of Kala, spoken in six villages, each dialect is unique and should be included in the project. 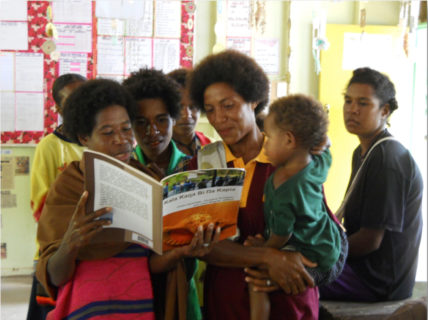 Women from Kui village read a copy of the Kala dictionary (2013). Christine Schreyer

There is joy in learning about Kala dialects other than one’s own. In 2013, one year after the publication of the first Kala dictionary, we saw people reading copies of the dictionary in all of the villages often with the aim of learning about other peoples’ ways of speaking. It’s not uncommon to find people chuckling over the differences in terminology and pronunciation, much as we do with other variants of English. In the course of our work we often travel between the villages more than the Kala villagers do, since we hire boats to take us and many villagers rely on canoes. Upon arriving in a village I am frequently called upon to demonstrate how the people in the next village over say a word or phrase in a different Kala dialect, often to larger crowds of people, who giggle with delight.

This year, two women from the village of Kamiali accompanied us to Manindala, as they were making their way to a women’s church group meeting. When I consistently used the Manindala dialect on the return trip, one woman, Miti, kept trying to correct me until I told her, “mi tok pilai tasol” in Tok Pisin (I’m talking play, that’s all) and she roared with laughter. One of the best examples of this joyous pleasure of dialects comes back to the soŋgoleŋ, and a variation of a little song many of us may have heard at summer camp: “The Little Green Frog.” 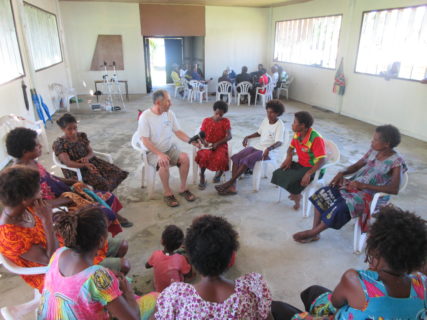 Our most recent research trips to the Kala villages took place in May of 2017 and 2019. In 2017, we worked in the three southern villages (all one dialect); in 2019, we worked in the three northern villages (each with their own dialect). During a trip in 2013, I began translating a few English children’s songs into Kala as a way to amuse people, kids especially, and one of them was “The Little Green Frog.” In 2017, songs were even more popular and, in conjunction with linguistics PhD student Margaret Ransdell-Green, we further developed the song for a Kala context. Although we didn’t have an opportunity to develop the song in other dialects, we did realize how much we were learning linguistically from translating this song and also learning other Kala songs that villagers were teaching us (see Schreyer and Ransdell-Green 2019). For instance, the Kala version of “The Little Green Frog” song contains key verbs such as “to say,” “to eat,” and “to go to sleep.” So, in 2019, one of the first things I did when I arrived in each village was to ask our local research committee to help me translate the song into their dialect. I’d then sing it to their general amusement, and discussions invariably arose about how each dialect differed from the others. Once they knew what I was up to, individuals in each village chose words for their version of the song that made it more suitable and unique. For instance, rather than the verb “to eat,” my collaborators in Manindala chose to use the verb “to down” (as in to swallow down).

When I arrived in Manindala my original translation of “The Little Green Frog” included the word polopuak, until the second day when I heard the word soŋgoleŋ, which then replaced it. And so, the song with all dialects was born: diŋgolẽ, ziŋgolẽ, zuŋgolẽ, soŋgoleŋ.

Numerous times throughout my stay in Papua New Guinea this year, people in all the villages asked me to sing the song with all the verses in each dialect. Adults often joined in, and in some villages I could hear children singing it as they played. In Manindala especially, where language shift is high and many children don’t learn Kala in their homes, finding new ways to bring them amusement in the language is invaluable. At our final Kala Language Committee meeting, where representatives from each village discussed their future plans to strengthen the Kala language, a song competition was mentioned as a potential option—building on the “Song of the Soŋgoleŋ.” 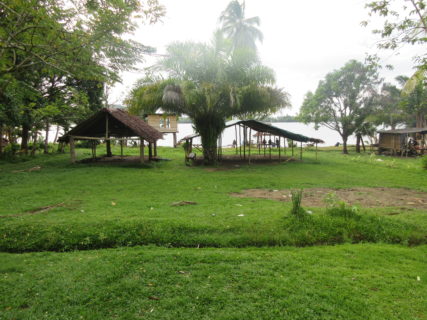 The view out the door of the Manindala church during our Rapid Word Collection workshop. Christine Schreyer

What can we learn from this example from a far-flung region of Papua New Guinea? In many cases, where communities are working to revitalize their Indigenous languages and where language shift is extreme, dialects are a source of tension and confusion rather than joy. People struggle to determine which dialect is the “most correct” or “most authentic” rather than appreciating diverse ways of speaking. In other contexts, where people are learning languages without a speaker-base, such as in fan communities learning constructed languages like the Na’vi language spoken in Avatar, fans have learned to embrace diversity and encourage anyone who begins to speak, no matter what they sound like (Schreyer 2015). This is one of many ideologies that endangered language communities could learn from constructed language communities, but also from other Indigenous communities around the globe, such as the Kala speakers.

While dialects can provide a source of amusement, they can also provide a source of pride. A community’s pride in its language is essential for successful language revitalization to occur, but pride in dialects is often a hard-won battle. The Kala speakers provide an example here again; in the song lyrics for “The Little Green Frog” villages wanted to emphasize and take pride in their dialectal differences.

As it turns out, with diversity comes knowledge. When I returned to Kamiali village and told individuals there that Manindala speakers had two words for frog—polopuak and soŋgoleŋ— their response was a curiosity about how these speakers, who are the most diverse, knew more about their environment than they did. And who knows what other mysteries, what other joy, might be hidden in diversity—if we only took the time to look and listen?

This material is based upon work supported by the National Science Foundation under Grant Number 1563363.

Christine Schreyer is a linguistic anthropologist whose research focuses on language revitalization and documentation, in Canada and in Papua New Guinea, as well as the relationship between endangered language communities and created language communities. She has conducted research with the Na’vi speech community (from the movie Avatar) and she is also a language creator.