A bedrock with a segregation problem

On most mornings, minutes before nine o’clock, a crowd of homeless men and women—mostly men of color—congregate before the Parkway Central Library. The massive neoclassical building sits conspicuously on the southern border of the city’s Fairmount-Art Museum district. It’s the main and central branch of the free public library system of Philadelphia, PA. Eager to return to the safety, tranquility, and myriad resources unavailable to them in the City of Brotherly Love, transient men and women, flanked by bags, can be seen on nearby benches long before the library opens, and long before the daily morning rush. Homeless Philadelphians file hurriedly into this public space surrounded by the Barnes Foundation, Philadelphia Sports Club, Starbucks, and joggers in Lululemon and Athletica gear, positioning the Parkway Central Library at the center of the proverbial “tale of two cities”—a story of rapid economic expansions and stubbornly high poverty rates.

The American Library Association’s (ALA) “Policy on Library Services for the Poor” was published in 1990, formalizing ALA’s contribution to a nationwide fight against poverty and homelessness (Ayers 2006). This commitment resulted in growing tensions across the nation “between respecting the rights of homeless people in public libraries and ensuring a safe and pleasant environment for other users” (Wong 2009). The vast majority of public libraries’ homeless users, generally referred to as the problem patron, are harmless (e.g., Simmons 1985; Kelleher 2012). Nonetheless, the conflict between access and security born out of ALA’s campaign to keep its doors and resources open to vulnerable segments of our population has not subsided; in fact, it has been exacerbated by continuous budget cuts suffered by libraries across the United States over the last few decades (Kelleher 2012). The Parkway Central Library, through its partnership with Project H.O.M.E in 2006, has joined other urban libraries in taking on the “conflict” between access and security—a conflict rooted in a tradition that views and treats homelessness as a threat to ignore, pity, or respond to with force. The Central Library continues this tradition by emphasizing and reinforcing safety as a commonsense position for having its doors open to both homeless Philadelphians and residents from the neighboring affluent community.

What follows are some of the findings from a research project that I undertook between January and May of 2015. This project began by chance. My wife and I moved to a small and poorly heated one-bedroom apartment in the Fairmount-Art Museum district. I had just begun doctoral studies at a local university. On bitterly cold winter days, the library, less than a five-minute walk away, served as a de facto workspace. Stark differences between sections of the library caught my attention. The discrepancies, from one room or floor to another, in aesthetic, norms, and what constituted sanctionable behaviors baffled me. 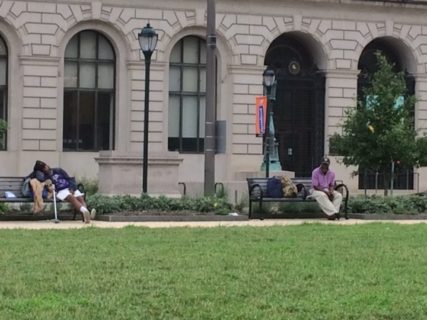 Homeless men waiting in front of the library. Thierry Saintine

All three participants interviewed for this study described the Parkway Central Library as the last kernel of hope for many homeless Philadelphians. Trenchy, a 64 year-old white man, who self-identifies as a writer, described the library as a “bedrock” for “homeless writers” who use the space as both a research and writing center. Many homeless shelters, whether specialized or generic, don’t allow their residents to hang around during the day. Socrates, a Puerto-Rican man in his 60s, observed that the Parkway Central Library serves as the “centralized day shelter” because of its location and size. The characterization of the library as a bastion of hope was put into historical context by Black Eagle, a black man in his 60s: “No more do we have to worry about the underground railroad. This library is the rainbow railroad out of poverty…this library is from God!” Knowingly or unwittingly, Black Eagle framed the library’s mission to ameliorate the lives of homeless Philadelphians as continuing the legacy of a city once considered a “natural junction on the Underground Railroad” (Okur 1995).

The Parkway Central Library, in its commitment to combat homelessness, has perpetuated the existing socioeconomic-based segregation that plagues Philadelphia. I rarely saw a homeless patron in the Philbrick Hall, the circulation room on the first floor with bright lights, lively and stylish furniture, and large flat monitor screens on the walls, where mostly young staff members congregate. The room is reminiscent of an Apple store or a high-end clothing boutique. It was commonplace to see adults, teenagers and younger kids, many of whom are white, roaming happily and freely up and down the aisles of the circulation room. In contrast, the Social Sciences and History room on the second floor is dim, cluttered with old books, even older state and city maps pasted on the backs and sides of bookcases, lifeless wooden tables and chairs thrown together with no apparent regard for symmetry. On most days and during most of the library’s operating hours, homeless patrons, often the same faces, could be seen in the Social Sciences and History room at disproportionately higher rates than other patrons. The room, like others on the second floor, was always very quiet.

It was difficult, during the early weeks of data collection, to figure out how many of the men, who shared the same space, the same table, for hours and several times a week, knew each other. Socrates, the second participant interviewed, commented on this: “This may be in the back of the [homeless patrons’] heads, if I talk, more than likely, one of these guys in blue uniform will show up and tell me to ‘tone that down’ because they got a call from a staff.”

There are no signs designating the space as a “quiet study area” posted anywhere in the Social Sciences and History room. The segregation of homeless Philadelphians in tucked away sections and rooms of the Parkway Central Library is an illustration of the “practice [of] careful disattention” (Allan 2011; see Goffman 1963a); the practice of upholding ALA’s support for the poor who, in this “classy place,” need to be made invisible to Fairmount-Art Museum district residents.

A public space with strict and elusive codes of conduct

The presence of homeless men and women at the Parkway Central Library seemed to have resulted in the implementation and enforcement of strict, yet elusive codes of conduct. Many of those rules appeared to mostly target and victimize the library’s homeless patrons. And although the library’s homeless patrons are aware of the unfairness and elusiveness of these rules, they generally follow them and find ways to adapt, and adjust their behaviors. A library guard ordered one of the homeless men to put his shoes back on. The man in question obliged without any hesitation or even confusion; he knew the codes. Similarly, Trenchy, did not challenge being thrown out of the library for having his life possessions in a plastic bag: “My bags got stolen…all I had was a trash bag to carry my things in. The guard came up to me and said ‘I don’t know how you got in here with that trash bag.’ I said, ‘Sir this is not a trash bag. These are my belongings.’…I was expelled. I couldn’t get in here for several days. I’ve been coming here long enough to know that it’s a question of appearance…this is a pretty classy place.”

Homeless man sleeping in front of the library. Thierry Saintine

These two examples, and many others, demonstrate the elusiveness of the library’s codes of conduct, often invisible to the untrained eye, and whose enforcement was at the discretion of individual guards. Despite being unclear, unfair, and arbitrary, the library’s homeless patrons viewed those rules as sensible and a reasonable price to pay for continued membership to this limited public forum. Many appropriated forms of socialization (e.g., no talking, no eye contact, hiding behind stack of books) that minimized or eradicated the risk of being perceived as threats or disruptive to other library users.

Urban public libraries are spaces where many homeless men and women can still enjoy some of the rights and privileges taken for granted by far too many of us. This study highlighted how homeless patrons “manage[d] the tension” (Goffman 1963a) between libraries’ social justice mission and ensuring a “welcoming” space to other users. My hope is that this essay will spur greater interests in documenting, analyzing, and understanding homelessness in public libraries, and how these public spaces can become “rainbow railroad[s] out of poverty” as was intended by the ALA’s 1990 policy.

Thierry Saintine is an assistant professor at Stockton University. His work and forthcoming book Racial Inequality in Mathematics: Exploring Academic Identity as a Sense of Belonging focus on academic identity construction, defined as belonging, and its potential effects on students’ performance, academic and career decisions.