The Poor and the Displaced in the Same Boat

As Lebanon’s economy goes through a long neoliberal collapse, living and dying as strangers has become the only affordable option for many Lebanese and refugee communities.

“No one puts their children in a boat, unless the water is safer than the land.” This verse from Warsan Shire’s award-winning poem, Home, has gone viral once again as more migrants’ bodies were retrieved from the Mediterranean. At the Port of Tripoli in northern Lebanon, dozens of people crammed into a dinghy in the early hours of April 23, 2022. Hours after departing, a Lebanese military boat rammed the migrant dinghy while attempting to steer it back to port. In a matter of minutes, the overcrowded vessel sunk.

In the wake of the incident, hundreds of aggrieved Tripolitans took to the streets, blocking roads, and throwing stones at the main checkpoint of the Port of Tripoli. As bodies were retrieved one or two at a time, protesters accompanied the victims’ families in public funerals. Enraged by the recent sinking of the “boats of death,” as they are often called, mourners’ protests included the phrases, “migrants of poverty” and “escaping from death to death.” The city that was named “the bride of the revolution” during the 2019 uprisings, has made it back into the headlines again—not for its lively chants to upbeat music in the city center, as happened then, but through the mobilizing power of death. Firing guns in the sky and carrying the bodies on their shoulders, protestors marched to Al-Ghuraba Cemetery, the cemetery of strangers. As its name suggests, Al-Ghuraba is a graveyard originally designated for the burial of those with no kin relations in Lebanon. The first bodies that were retrieved and buried at the cemetery, however, were not those of foreign nationals or refugees, as one might expect. In fact, they were the bodies of Lebanese nationals.

Among the more than 80 passengers on the boat, a dozen were displaced Syrians and six or seven were Palestinians from the refugee camps of northern Lebanon. The rest were Lebanese from in and around Tripoli, the second largest city in Lebanon and its most impoverished. Hosting the largest number of refugees per capita in the world, Lebanon is a constant reminder that impoverished countries—and not North America and Western Europe—are the ones sharing the responsibility for 80 percent of externally displaced persons worldwide. The boat almost perfectly represents Lebanon’s demography: a country of 6.8 million Lebanese with more than 1.5 million displaced Syrians and nearly half a million Palestinians.

In the right corner, trash gathered around a few grave plots and on the left, a one-story brick and mud house with colorful clothes hanging under the sun on the roof.
Credit: Foroogh Farhang 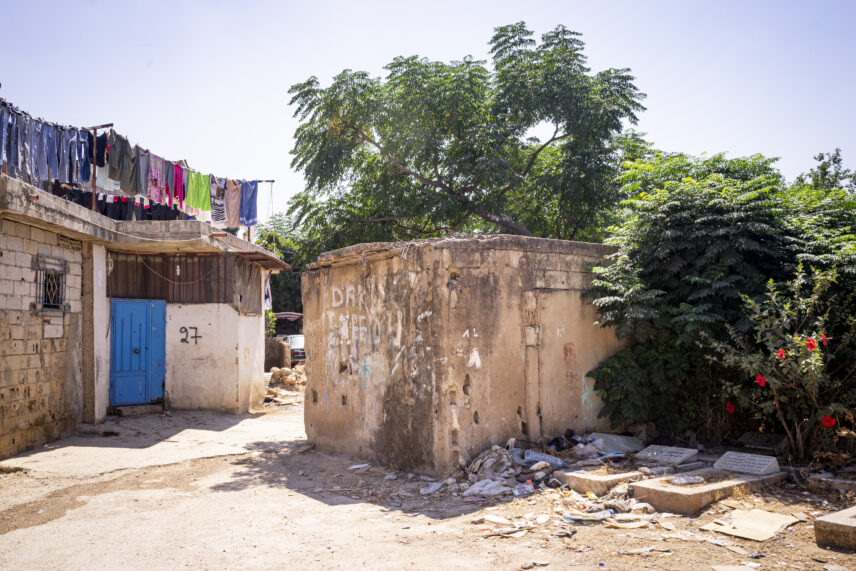 A view of the Cemetery of Strangers.

It came as a shock to many Lebanese that their country, which has long been a refuge for the displaced of the region, is now sinking so deep that not only its refugee communities but more and more of its citizens are taking the clandestine route of migration to end up dying and being buried as strangers in their own country. But the sinking of the dinghy is not a singular event. Nor is it a coincidence that the poor and the displaced of the country were in the same boat and got buried next to one another in a cemetery designated for strangers and non-citizens. In the last decade, against the backdrop of the Syrian civil war followed by the 2020 Beirut port blast and the COVID-19 pandemic, living standards have deteriorated to such an extent, rendering more displaced Syrians and impoverished Lebanese strangers in Lebanon.

A closer look at the cemetery, where the migrants’ journey ended, illuminates the intertwining of the lives and deaths of the marginalized poor and displaced populations in Lebanon. Over the years, the cemetery has attracted more and more impoverished families who live illegally on the endowed lands of the cemetery and are referred to as ghuraba, strangers. It is an increasingly popular destination for the poor, the outcast, and the displaced who both seek refuge in it and bury their dead.

Living and dying as strangers

Following the news of the shipwreck and watching live videos of public funerals from my home in Chicago, I could recognize corners of a cemetery I had frequented and the faces of people I had worked with during 18 months of ethnographic fieldwork in 2018–2019. The Cemetery of Strangers felt familiar once again. What was strange, however, was the presence of hundreds of people marching into a graveyard I remembered as invisible to outsiders. Al-Ghuraba occupies a marginalized, yet curiously large and central area in metropolitan Tripoli. It takes less than a half hour to walk to the cemetery from Nour Square, the main square in Tripoli and what made the city the bride of the revolution during the 2019 uprisings. If you make the walk, the lower-class residential areas near downtown Tripoli slowly disappear and Ghuraba street comes into view. On the other side of the street is the cemetery. Separated from the street by long untrimmed grass and one-meter-tall mud walls, the green dome of a humble shrine with white walls peeks over the top.

The hundred-year-old cemetery is part of Dā’irat al-awqāf, or the religious endowments system, meant for the charitable burial of visitors, merchants, and travelers who die in Lebanon. In practice, however, Al-Ghuraba has been treated as the dumpster of Lebanon’s history. It is the final destination for many outcasts, the undesired, and the downtrodden. Find your way to the graveyard and you would be walking through the mass graves of the militants of Fatah al-Islam involved in the 2007 Lebanon conflict, those who died during the last two decades of recurring sectarian clashes in Tripoli’s neighborhoods, and the Ethiopian migrant workers who died in the 2010 Ethiopian Airlines crash and were never sent home. More recently, the cemetery has welcomed the bodies of the Lebanese poor and many displaced Syrians who migrated to Lebanon since the start of the Syrian civil war. There in the cemetery, the less glorious episodes of Lebanon’s sociopolitical history lie in the ground.

Yet in between the graves there is life. The deeper you walk into the graveyard, the more children and shacks you see, until you find yourself in a neighborhood within the cemetery. Concurrent to the ongoing and interlocking forms of structural violence and further marginalization of the poor, the demography of the cemetery and the meaning of ghuraba/strangers have been expanding to incorporate low-income northern Lebanese—those hardest hit by the country’s economic deterioration. Since the start of Syrian civil war in 2011, displaced Syrians who are marginal to Tripoli’s urban fabric have also been attracted to the more affordable living costs in the cemetery. By the fall of 2019, the number of living strangers in the cemetery included 250 Lebanese families and 30 Syrian families who were registered as illegal dwellers by the Religious Endowment Office in Tripoli. The population of the cemetery—the living and the dead—has been growing so rapidly that Sheikh Balout, the head of the Religious Endowment Office in Tripoli, called the state of the cemetery “the crisis of ghuraba [strangers].” In an interview in summer of 2019, he described this crisis to me as the result of the absence of a strong state in the poverty-stricken northern regions, where Lebanese fuqara (the poor), moved into the cemetery and started building illegal shacks. “They [the Lebanese poor] have been inviting Syrians to live in the cemetery with them, as if it is their land to offer,” he continued.

Sheikh Balout is not the only one who couples fuqara with ghuraba. The poor and the strangers are terms that are increasingly intertwined, interchangeably used, and have evolved into metonyms for the marginalized people who end up in the cemetery, whether living or dead. Since 2019, and parallel with the collapse of Lebanon’s laissez-fair economy that has pulled 50 percent more of the population of Lebanon under the poverty line (from 25 percent in 2019 to 74 percent in 2021), many Lebanese and refugee communities can now only afford living and dying as strangers. Al-Ghuraba Cemetery, in this way, has come to exemplify the intensified marginalization of Lebanon’s poor and the displaced, through which the distinction between citizens and refugees is constantly disrupted. It is not only that poor Lebanese and displaced communities such as Syrians and Palestinians share the marginal spaces of cities and villages in Lebanon. But also the way their futures and aspirations are ever more interconnected in ways that propel them into death boats and on clandestine routes of migration.

What Sheikh Balout identified as “the crisis of ghuraba” speaks to the anguish of the public funerals held for the Lebanese victims of the shipwreck. It calls attention to the shifting meanings and geographies of social unrests from centers to marginal lands like Al-Ghuraba Cemetery. The struggles of the Lebanese poor and the plight of displaced communities in Lebanon have become ever more entangled as the country’s economy deteriorates and pushes people to the margins. The unemployed and low-income Lebanese, the displaced Palestinians, and the more recently displaced Syrians, among others, have been struggling in one way or another while managing a disputed and constantly disrupted mode of coexistence in Lebanon. The incident of the recent “boat of death” and the following protests shows the extent to which the fight against further estrangement in Lebanon brings the lives, deaths, and aspirations of the poor and the displaced together.

Foroogh Farhang is a PhD candidate in cultural anthropology at Northwestern University. Her research explores the intersection of war, displacement, and death in Lebanon.