The Racial Language of Fatphobia

How can linguistic anthropology help illuminate the connections between dietetics, fatphobia, and racism?

Recently, a Twitter user wrote: “There is a fat politics movement. Come on in. The water’s fine.” Linguistic anthropology needs to “come on in,” as it were, to the fat politics movement. Specifically, we need to harness our analytical insights into the co-constitution of language, the body, and social difference to understand how people in this “fat-talk nation” produce and contest fatphobia.

Fatphobia—or, more specifically, anti-fatness—is the societal and biomedical antipathy toward fat, and it impacts nearly every aspect of our world. Fatphobia manifests in doctors’ rampant misdiagnoses of fat patients due to their weight; in licit size discrimination in employment; in the de facto exclusion of larger bodies in infrastructure and design; and in a vast diet industrial complex that at best demonizes and at worst seek to eliminate fat people.

Fat liberation activists and scholars have long recognized how thin supremacy is predicated upon and compounded by white supremacy, ableism, and cissexism. Fatphobia has been, and continues to be, central to the construction of whiteness within European settler-colonial projects. Sabrina Strings shows that as the transatlantic slave trade gave rise to scientific racism during the long eighteenth century, the figure of the robust Black African woman became a medicalized object of derision, transforming fat from a sign of wealth and health into a sign of racial inferiority and moral failure. These processes continue today in the moral panic surrounding the “obesity epidemic,” which stigmatizes Black women’s bodies in particular, and obscures the fact that weight stigma and systemic racism pose greater health risks than weight itself, including for COVID-19.

Collections of words in different colors form the outlines of three people standing side-by-side. Above their heads, two speech bubbles are constructed out of word clusters as well.
Credit: Hannah Carlan 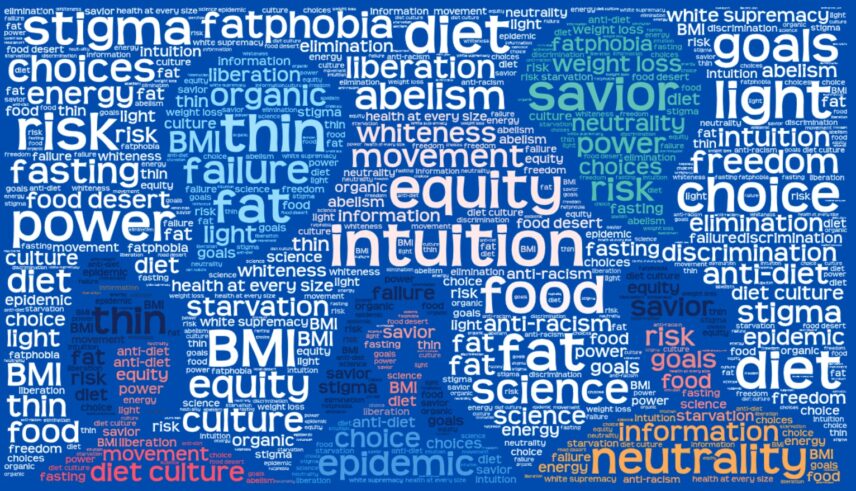 A word cloud about diet and discourse

Linguistic anthropology offers a robust set of tools with which to examine how racialized understandings of weight, health, and morality are encoded in language. A raciolinguistic perspective, for example, can help uncover how anti-fatness becomes critical to the performance and valorization of whiteness. We can apply methods from conversation analysis to understand how weight stigma manifests in contexts ranging from doctor-patient interaction to social media. The political economic framework of language materiality can elucidate how firms produce capitalist value from anti-fat discourse, and in doing so, generate profit from white supremacist body ideals. By examining the semiotic production of fatphobia—as does, for example, Krystal Smalls’s recent article in Transforming Anthropology—we can offer greater insight into how everyday language use perpetuates racialized harm against fat people.

The racializing logics of fatphobia are on full display in professional dietetics, a field that is overwhelmingly dominated by white women (92 percent women, 80 percent white). Ample research demonstrates the long-term physical and psychological consequences of dieting, leading many registered dietitians and nutritionists in recent years to reject traditional weight-normative models of health and embrace a new “anti-diet,” weight-inclusive approach. They draw primarily on the clinical paradigms of Intuitive Eating and Health At Every Size, which promote food and body neutrality and emphasize social determinants of health, including weight stigma, racism, and poverty—thus aligning in many cases (though not all) with the decolonizing perspectives of fat liberation scholars, activists, and dietitians. Whereas fat liberation activists seek to highlight the intersecting forms of discrimination faced by fat people of color, the anti-diet approach has largely aligned with the more generic discourse of “body positivity,” which centers the experiences of white women in smaller bodies and emphasizes self-love as key to overcoming fatphobia.

As the anti-diet approach to nutrition has increasingly through online platforms, discourses like “neutrality,” “intuition,” and “anti-racist nutrition” have become a crucial resource for cultivating a weight-inclusive professional brand. The growing demand for novel approaches to nutrition beyond a traditional weight-loss approach has led many providers and firms to use anti-diet language to rebrand diet products and services. Gwyneth Paltrow, CEO of the “wellness” brand Goop, recently promoted a book called Intuitive Fasting that rebranded intermittent fasting—a behavior that leads to weight cycling and is a risk for developing eating disorders—using the language of Intuitive Eating, an approach that rejects food restriction.

Both practicing dietitians and scholars have called attention to the appropriation of anti-diet and fat liberationist discourses by the diet industry, dietitians, nutritionists, and influencers. Scholar and activist Marquisele Mercedes recently analyzed how white, thin anti-diet dietitians on Instagram have dominated spaces in the body positive movement and used their platforms to profit from the work done by fat activists of color. A major way they do this is through the images they post: contorting themselves into positions to show a slight curve or roll on an otherwise thin, white, able-bodied person. Language is also another crucial site where this appropriation happens. For example, dietitians and influencers often align themselves with anti-diet models of nutrition while clinging tightly to purportedly objective ideas about the “science” of food and bodies. For example, one “holistic” registered dietitian recently posted on Instagram:

I am body-neutral.
But I am also science-neutral.
Which means: I acknowledge that
eating a cookie DOES cause an
unfavorable biological reaction
and also acknowledge eating it
DOESN’T make you a bad person

Here, the dietitian uses discourses of science alongside those of food and body neutrality. Whereas neutrality is an Intuitive Eating principle that seeks to de-moralize food choices and body types as either “good” or “bad,” this dietitian positions herself as body “neutral” but not food “neutral”: she argues that all people are morally equal, but all foods are not. In the caption on this post, the dietitian warns against “altering good science” about cookies, which she claims cause an “unfavorable biological reaction,” a pseudo-scientific phrase with a host of dubious connotations, including weight gain. It is a slippery slope from this view of cookies as biologically inferior, to a view of certain people and bodies as such, but she defends against this potential accusation by appealing to liberal ideals of tolerance, writing in the post’s caption: “ALL PEOPLE ARE EQUAL!” By articulating a supposedly objective relationship between food, science, and biology, she manages to send a profoundly non-neutral message to cookie-eaters not only their food choices, but also about their inept understanding of “science.” The appeal to both “science” and “neutrality” reifies a purportedly objective relationship between food and bodies, one that ultimately valorizes thinness. Encoding the thin ideal through pseudo-scientific phrases like “unfavorable biological reaction” merely sanitizes the underlying message, which is to say that weight gain is harmful, an ideology that is both anti-fat and anti-Black.

Another discourse that has been appropriated in ways that reaffirm fatphobia and anti-Blackness is “movement.” In recent years, the term “movement” has become favored over “exercise” by Black, fat, and disabled physical therapists and trainers in an effort to promote a reconnection to the joy of moving one’s body as key to mental and physical well-being without an orientation toward weight loss or physical ability. In shifting their language use, these activists and practitioners are indexing a distinct set of values, principles, and politics in which physical activity can be inclusive, non-strategic, non-weight-loss-focused. However, “movement” is now being used by dietitians, trainers, and influencers merely using the term to promote a slender aesthetic. For example, one Instagram post by a self-described “certified intuitive eating life coach” features an image of a thin, white woman from the waist down that is framed by the words “ABS FOR FUN,” followed by the hashtags #movekindly, #intuitivemovement, #joyfulmovement, and #antidiet. The post links discourses of intuitive movement, which rejects body modification as the goal of physical activity, to the pursuit of abs and therefore to slenderization.

A third way that some anti-diet dietitians reproduce deeply racialized understandings of weight and health is by positioning themselves as anti-racist expert-saviors whose job it is to protect their clients from “harmful” foods. These providers attribute disparities in food access to systemic racism while continuing to depict clients’ individual eating behaviors as destroying their “health.” The same dietitian who posted about the “science” of cookies —and whose bio says she can help you “lose weight in a loving way!”— also posted a series of Instagram stories criticizing one of Intuitive Eating’s core tenets, “all foods fit,” on the basis of her desire to be anti-racist:

Processed food targets minority and low-income populations, and is really a weapon against those populations to make them sick and die. For me, to say something like “all foods fit” is so against my core understanding of white supremacy in the food chain and in pharmaceutical care. So for me, if I care about equality, nutrition information is important, and expressing it to people is also important, so it’s another population I wanna protect, or try to protect. […] if I know that there are foods that cause illness specifically targeted at Black youths […] and if the one change they can make is avoiding these specific foods and choosing other ones, it’s like a no-brainer to me to give that vital information and to withhold it for the eating disorder population. [emphasis added]

This dietitian has managed to construct a racialized hierarchy of need for her clients in a discussion purportedly about racialized health disparities and predatory capitalism. While the “eating disorder population” is implicitly coded here as white, for whom certain nutrition information must be withheld to prevent self-harm, the “Black youths” must be given “vital information” so they might choose to not to eat “processed foods.” It then becomes the duty of the “equality”-minded dietitian as scientific expert-savior to “protect” her Black clients (who are figured as somehow immune to eating disorders) from the white supremacist processed food industry. Her appeal to an anti-racist approach belies her neoliberal framing of individual choice as the source of “health,” and of Black people’s knowledge and choices as deficient.

Language is a crucial site from which to understand the everyday enactment of anti-fatness and thus the perpetuation of anti-Blackness. By stitching together discourses of intuition, neutrality, science, movement, and anti-racism, some dietitians seek to brand themselves as progressive providers in a shifting market for health and wellness all while reproducing deeply fatphobic and racist ideas about food, bodies, and people. By selectively appropriating the linguistic and cultural resources of fat, Black, queer activists and scholars, divorcing them from their original meanings, and recontextualizing them in ways that stigmatize fatness, these providers are engaging in and profiting from anti-Blackness. Such discourses might not seem “overtly” racist due to the ideological and semiotic processes of erasure that tie thinness to whiteness as unmarked categories. Excavating these links is imperative not only for linguistic anthropologists committed to the study of racialization, embodiment, and health, but also for those providers who actually do seek to avoid perpetuating harm to clients through their everyday language.

If you would like to do further reading on the subject, the author suggests Belly of the Beast: The Politics of Anti-Fatness as Anti-Blackness, Fearing the Black Body: The Racial Origins of Fat Phobia, and The Fat Studies Reader.

Hannah Carlan is a visiting assistant professor of anthropology at Rollins College. She writes about the politics of language in a variety of contexts, and is currently developing her dissertation into a book project on the linguistic production of state power in the Indian Himalayas. You can find more of her writing at hcarlan.com.