New conservative personae of free speech rely on language ideologies about race and gender to legitimize some speakers and delegitimize others.

Since the mid-twentieth century, many Americans have seen free speech as primarily serving an inclusive and egalitarian concept of public space and political legitimacy. This view draws on stories of anti-war protestors and civil rights activists, like Mario Savio and Rev. Fred Shuttlesworth. An opposing view of free speech was on offer in President Trump’s March 2019 executive order to “protect free speech on campus.” While the impact of the order itself has been up for debate, its signing ceremony was an inflection point for a conservative vision of free speech as the province of normatively gendered whiteness.

I have closely followed the language politics of free speech here in the United States while writing a book about free speech and the idea of the free press in India. In both countries, arguments about free speech assert a line between what people consider morally legitimate and illegitimate language, often by creating portraits of its speakers and hearers—what Asif Agha has called the “characterological figures” or persona of speech styles. The executive order’s signing ceremony illustrated a new order of legitimacy by staging a tableau for free speech that featured two opposing figures: the unruly leftist and the good white woman.

The signing ceremony resembled a memorial for those who have suffered for free speech on campus. The US president stood surrounded by rows of seated twenty-somethings, almost all white and at least two-thirds men, while a small group of young women and men stood behind him. He welcomed his guests with tropes of war—“We’re here to take historic action to defend American students and American values. They’ve been under siege.”—that turned the invited speakers into heroic martyrs. These three speakers were all young white women in dresses with hair blown-out in the style of the president’s own daughter. The president described the “attack” each had faced on her campus: the first guest had resisted posting the required “trigger warnings” for her exhibit of crosses for the unborn; the second had been tabling for Turning Point USA when a part-time instructor shouted protests at her; and the third had been only allowed to distribute Valentine’s Day cards saying “Jesus loves you” in the campus’s designated “free speech zone.” 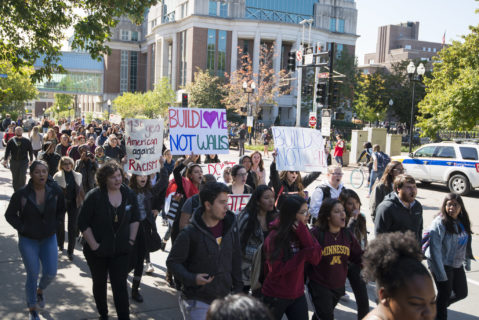 Individuals march in protest against hate speech on the University of Minnesota campus in Minneapolis, October 6, 2016.
Fibonacci Blue/Flickr (CC BY 2.0)

The event staged the conservative experience on US campuses as one of a threatened minority subject to an abusive majority. Erasing the fact that universities restrict speech across political differences, the president enrolled the students in the room in his combative we/they frame. Going off-script midway through the ceremony, he said, “And if they do have different views, we encourage that. But they have to let you speak. They have to let you speak.” The explicit logic of the executive order is that conservative speakers (“us”) are being denied their rightful conversational turns by “radical leftist” political speakers (“them”). The implicit characterological figures of this narrative connect it to a broader social imaginary.

One place that the characterological figure of that imagined abusive majority—the campus leftist—has taken shape is in media coverage of the “shout-down,” a genre in which protestors seek to be louder than those whom they are protesting. Stanley Kurtz has chronicled this protest speech genre in the National Review over the last several years, using episodic timelines of “disturbances” to portray US campuses as ground zero of an epidemic of unruly speech. In a piece calling 2016–17 the “year of the shout-down,” Kurtz describes campus events at which anti-racist and pro-Palestine protestors shouted or chanted at public speakers. Taking a broken-windows approach to campus protest, Kurtz argues that all shout-downs must be punished because even a “single shout-down left undisciplined by administrators chills speech and poisons the campus atmosphere long afterwards.”

Such outrage about the “shout down” genre has helped to produce the persona of the anti-racist campus activist or “college campus leftist” as a bad-faith disruptor of civil, public space. Like the online memes of the “SJW” or “Social Justice Warrior,” the persona of the campus leftist draws on longstanding associations between loudness, unruliness, and gendered and racialized bodies.

Against this foil of the unruly leftist, the signing ceremony constructed a characterological figure, also intertwined with a speech style, for threatened conservative speech: the normatively effeminate young white woman. Both the event memorializing the unborn and the event distributing Christian Valentine’s Day cards were deeply sentimental visual demonstrations—the third event consisted of sitting at a table representing a national organization. In stark contrast to the “shout down” events, these events were largely quiet. The signing ceremony’s celebration of these three speakers presents the speech on siege as the ideal feminine speech that Deborah Cameron has described as “modest, deferential, and publicly silent.”

The event makes use of the language ideological processes described by Judith Irvine and Susan Gal to diagram an opposition between virtuous white women and bad-faith “social justice warriors” onto the opposition between legitimate and illegitimate speech. The linguistic feature of loudness connects racist and gendered beliefs about what kinds of people are loud or quiet to moral evaluations of loud and quiet speech (“loud speech is uncivil”). This enables what Miyako Inoue has called an “indexical inversion,” in which the relationship between a cause and an effect is flipped. The illegitimacy of leftist activists becomes their defining feature, their essential quality, not a result of their speech behaviors. Similarly, the white women here are not legitimate because of their speech style; their speech is legitimate because they are white and normatively gendered. Just as racist ideologies sneak in through ideas about “appropriateness” in schools, as Nelson Flores and Jonathon Rosa have shown, they shape ideas about what kinds of speech are politically legitimate and what kinds are not.

Staging the “free speech wars” as an onslaught of loud and dangerous leftists abusing well-meaning, quiet white women helps rescue the conservative free speech position from its own distasteful associations. Nationally publicized campus protests have mostly focused on a few high-profile speakers whom even many conservatives find offensive. The signing ceremony replaced those outrageous figures with the sentimental and demure figures of white women with good intentions. This substitution erases the sticky questions of hate speech and inclusion on US residential campuses and makes the conservative vision seem like basic decency.

In contrast to the association of free speech with civil rights icons, the signing event asserted a vision of American public space and political participation as the moral domain of normatively gendered white people. Pivoting the event on the president’s own preferred norms of femininity shifts the “footing” of campus speakers and judges the legitimacy of their speech on their fulfillment of gendered norms. This implicitly connects the president’s campaign to “protect campus free speech” with the political fight against those queer sexualities and non-normative genders that characterize many online representations of the campus “SJW”—the same that are the focus of panic about gender-free bathrooms as the end of civilization.

It is how the event restages racist tropes that makes the opposition between these characterological figures of the unruly leftist and the good white women into a call to conservative action. The signing ceremony shrewdly pulls together evocations of loud, illegitimate leftists; metaphors of war; and the unfair suffering of good white women to create a compelling plot, replete with bad guys and maidens, that draws on myths about threats to white women’s virtue that, as Angela Davis established, have served to justify violence against Black men since Jim Crow. In doing so, the event calls on its audience of largely white, normatively gendered men to be the hero: to defend free speech and save these good quiet white women from the onslaught of loud radical leftists.

The explicit promise of the executive order is to punish those universities who do not punish the speakers disrupting legitimate turns to talk. The question is, who gets to be considered legitimate? The apparently neutral solution—advocated by Kurtz himself—is to make policies designating the forms of speech that are legitimate or illegitimate on campus. But the executive order and its signing ceremony illustrate how entangled speech genres and social personae are, and how entangled both of these are with longstanding ideologies of race and gender. When we imagine free speech, we also imagine somebody speaking. Free speech is a powerful medium for political battles precisely because it knits legal rights together with these strongly felt beliefs about language and the social imaginaries that underlie them. While this power can be used to widen political inclusion, it can also be used to reinforce exclusions.

Katherine Martineau is a cultural anthropologist and assistant professor of South Asian Studies in the Department of Asian and Asian American studies at Binghamton University. Her interests include media and journalism, language politics, postcolonial law, democracy, and historical anthropology. Learn more at https://katherinemartineau.com/