On November 17, 2018, colleagues, former students, family, and friends of Robert R. Alvarez attended the two-panel session at the AAA Annual Meeting that was organized by Carlos G. Vélez-Ibáñez and was chaired by Maria Luz Cruz Torres and Patricia Zavella. The session honored the extraordinary works that have defined our studies of the Mexico-US transborder region. Patricia Zavella, one of the presenters, read a poem composed in Alvarez’s honor by Juan Felipe Herrera, Poet Laureate of the United States (2015–2017). Alvarez is the Society for Applied Anthropology 2019 recipient of the Sol Tax Award for Distinguished Service. We offer this tribute to Alvarez’s work, and following the poem, a short epilogue by Alvarez.

“They Fought Back (Field Notes),” a poem in honor of anthropologist Roberto Alvarez

days when I was an almost-altar boy
we played there, in the under-realm,

on Medicine mountain mountain top, these days, in Jamul—
Bob & Karen notice the purple smoke of the dawn
how it moves across the cities below
Sage grows here, Bob says, everywhere

Raises four chickens & he jogs the trails
going somewhere, looking ahead
earth & sky & in between, the people, the lives
coming & going—

Panama—i was there there in the ’70s, Bob says,
Social Change—those words, what were they made of
— Social Change
400 to 500 hundred campesinos
provincia Santiago de Veraguas, Panama
they grew rice just a little, getting by
they work hard for what

i joined the Peace Core, Bob says—
La Coperativa de Multiples Servicios, it was called
in Santiago de Veraguas, we started a Co-op
for the rice farmers, that’s right, he says
a co-op yes a co-op
(He probably won’t tell you all this, he’s not that kind of a guy)

we introduced a new type of seed, a hybrid rice seed
we discussed it we exchanged words
everyone has a voice, yes—we worked together
it’s a good idea, don’t you think, yes, the poorest of the poor
provincia Santiago de Veraguas, Panana,
at the edge of the world

we got a truck, so we wouldn’t have to pay to haul the wild seed,
this is good. the campesinos said
we don’t have to give it all to a middleman
the workers, said —
fertilizer, medicine, yes, that too

things got better, it took time, but, they got better,
guess what, Bob says,
in his suave clarinet voice
today, Coperativa Santiago de Veraguas
still going strong—(Bob won’t talk about this, he’s
not that kind of guy)

Bob, says—
Back then, anthropologists used these words:
Social
Strat-ification

Anthropologists used this word:
Economics
They said—Economic Stratification
but they never talked
about the people, Juan

they never talked
about La Gente, the People
how they fought— they never said

Bob & i, we talk—then
there was the thing about Lemon Grove Barrio,
near san Diego—back in the ’30s
school segregation—Bob said
how my father spoke up—he was only twelve then—

Browns on this side & Whites on that side—what could
a grandmother and a 12-year-old kid accomplish, Juan? Bob says—
they studied, they came together with the community
it just didn’t happen—
they fought hard, they formed La Asociación de Los Vecinos
& they won, Juan, we won—
Alvarez v. the School Board of Lemon Grove 1930

Guess what? Bob says—no one knew about this struggle
my sister & i went to the libraries, where they had records
on microfiche—it

my sister found the school board minutes so
i wrote about it in my dissertation at Stanford—people had to know
it’s in my book, La Familia

(You won’t catch Bob going ‘round rappin’ about this)

back in Panama,
Bob continues, from Santiago de Veraguas to the Cuna Peoples
Isla del Tigre
east of the Panama Canal
San Blas islands—Bob returned, lived there
listened there, noticed there

men in hammocks, the council, Bob spoke up:
a co-op, the Mola tapestry art of the women
the colors the embroidery the patterns & cut-outs
sewing yellow heat women sewing
green-rain ocean undercurrents
women’s art women’s labor their true worth

“The gold of our culture.” A council leader said
the council debated, agreed—the co-op began
Guess what? Bob says—the co-op’s still there

They organized, they fought back, Juan —
notice it — the Mola embroidery:

all this & not this described like this—
Bob Alvarez, says, They organized, they fought back—

Roberto Alvarez does not say:
“I organized, I fought back, I took part.”
(You are not going to catch Bob saying these things)

Bob would rather say,
Hey, Juanito, next time you come,
let’slide some salmon on the grill, up here
in Jamul, Medicine Mountain—I’ll bring out my 12 string Taylor,
you bring your ’69 Gibson, we’ll play something,
under the night skies—together)

Roberto Alvarez—today we say to you—
“You organized, you fought back, for decades—for the people.” 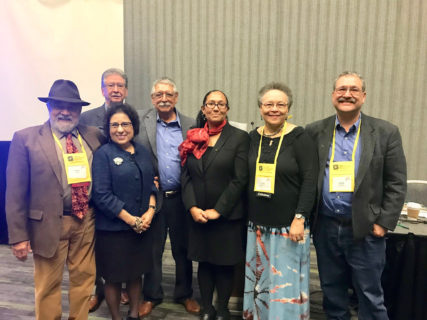 I’ve been thinking about you all, mulling your words

And of your presence last week at the AAA.

for those of us who came before us. Bea Medicine powerful spirit. Brother George C. Bond.

I felt humbled by what you all said, honored

but mostly, I am so thankful for what you all represent—the true non-traditionalists—warrior women and men, and what you have done for me over the years. No one can act alone, and I know that I counted on all of you, your support, strength and steadfastness in our continuing struggle. Mil gracias, and mil abrazos to you all. Carlos, Patricia and Mari Luz gracias for organizing us. Juanito your rhythm and soul. I love you all.

Carlos G. Vélez-Ibáñez is Regents’ Professor and Motorola Presidential Professor of Neighborhood Revitalization and Professor of Human Evolution and Social Change, Founding Director Emeritus of the School of Transborder Studies at Arizona State University, and Emeritus Professor of Anthropology of the University of California, Riverside.

Juan Felipe Herrera was Poet Laureate of the United States (2015–2017). He serves on the Board of Chancellors of the Academy of American Poets. Previously, he has taught at California State University-Fresno and the University of California-Riverside.

Robert R. Alvarez is professor emeritus at the Ethnic Studies Department at University of California, San Diego. His research includes ethnographic work on US formal education for minority groups, immigrant settlement along the California-Mexico border, and transnational markets and entrepreneurs.