To Impeach or Not to Impeach?

That is the question only Congress—and not the Mueller report—can definitively answer.

The political struggle over the Mueller report illustrates the tortuous social life of a text—especially a text fraught with high political stakes for a sitting president. Special counsel regulations required Robert Mueller to communicate his “prosecution or declination decisions” in a report to the attorney general who would then provide a summary to Congress—ensuring the report would pass through several links of a twisty speech chain before reaching the public.

The movement of any text across space and time opens up various intertextual gaps (Briggs and Bauman 1992) between the originating context and subsequent ones where meaning can be affirmed, contested, and reshaped to varying degrees. Robert Mueller would lose full authorial control over the words he put down on the pages of the report once the report was picked up by a new reader. In this case, that reader would be Attorney General William Barr.

Some might expect Barr to receive the report and open it to find Mueller’s intended meaning clearly revealed. Barr could then unproblematically transmit that meaning to Congress in a summary—or, better yet, act as a conduit in the literal sense of the word by physically handing the report over to Congress who could then open the text to find the meaning clearly revealed. But this view relies on the popular myth that meaning is somehow neatly “packaged” into words (Reddy 1979) or encapsulated in a “fixed text” (Blommaert 2005) that can be more or less automatically decoded. 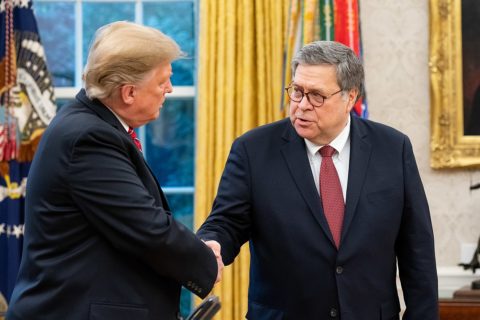 The most obvious collision between Barr’s March 24 summary and the Mueller report (publicly released on April 18) involves the obstruction-of-justice question surrounding numerous actions taken by Trump in relation to the investigation. Mueller avoided making a traditional “prosecution and declination decision” on this question due to the Office of Legal Counsel’s (OLC) policy against “the indictment or criminal prosecution of a sitting President.” Nevertheless, he documented the facts surrounding several events from the firing of FBI Director James Comey to various efforts by Trump to remove the Special Counsel to Trump’s orders to White House Counsel Donald McGahn to lie about those efforts. In the end, Mueller noted that “if we had confidence after a thorough investigation of the facts that the President clearly did not commit obstruction of justice, we would so state. Based on the facts and the applicable legal standards, however, we are unable to reach that judgment.” Mueller equivocally concluded: “Accordingly, while this report does not conclude that the President committed a crime, it also does not exonerate him.”

In his March 24 summary, however, Barr unequivocally concluded “the evidence developed during the Special Counsel’s investigation is not sufficient to establish that the President committed an obstruction-of-justice offense.” Barr based this conclusion on a widely contested premise (previously outlined in a memo he wrote before becoming attorney general) that there must be an underlying crime to obstruct justice. Since volume I of the Mueller report found that contacts between Russia and the Trump campaign did not rise to the level of a crime when examined through the legal framework of conspiracy law, Barr ignored the body of evidence compiled in volume II of the Mueller report pertaining to the obstruction-of-justice question. Barr wrote of his decision to clear Trump of obstruction: “In making this determination, we noted that the Special Counsel recognized that ‘the evidence does not establish that the President was involved in an underlying crime related to Russian election interference,’ and that, while not determinative, the absence of such evidence bears upon the President’s intent with respect to obstruction” (italics indicate a direct quote from the Mueller report).

After Barr authored his take on the Mueller report—paraphrasing, quoting, ignoring evidence, and adding his own conclusions—Mueller attempted to reassert his authorial intent over the meaning-making process. Mueller wrote a letter to Barr on March 27 (later reported by the press on April 30) stating: “The summary letter the Department sent to Congress and released to the public late in the afternoon of March 24 did not fully capture the context, nature, and substance of this Office’s work and conclusions.” Mueller noted that he had provided Barr with redacted versions of “the introductions and executive summaries of our two-volume report [that] accurately summarize this Office’s work and conclusions” and requested that Barr “provide these materials to Congress and authorize their public release at this time.” That was on March 27, three weeks before Barr eventually released a redacted version of the full report.

The redacted report represents another interesting twist in the social life of this text. The selective omissions in the redacted text—unlike omissions in reported speech—conspicuously hide in plain sight. Blacked-out lines indicate to readers what we—including Congress—are not authorized to see. Although Congress should be granted access to the full unredacted report, over 900 former Justice Department prosecutors agree that the publicly released version details a wealth of unredacted evidence that “describes several acts that satisfy all of the elements for an obstruction charge.”

Would Mueller agree if it weren’t for the OLC’s legal opinion against charging a sitting president? That’s the question on the minds of many, as Congress seeks to bring Mueller in to testify. If or when he appears before Congress, representatives will probe for an answer. But don’t expect Mueller to stray far from the equivocal conclusion already written in his report. Ultimately, Congress will have to arrive at its own interpretation of the obstruction-of-justice evidence; no singular speech act from outside that deliberative body can do it for them. If they decide, along with hundreds of former Justice Department prosecutors, that the sitting president did obstruct justice, they must perform their constitutional duty to make that charge.

Adam Hodges is a linguistic anthropologist who writes about language and politics. His forthcoming book, When Words Trump Politics: Resisting a Hostile Regime of Language, will be out this fall from Stanford University Press. His previous books include The ‘War on Terror’ Narrative and Discourses of War & Peace, and his articles have appeared in the American Anthropologist, Discourse & Society, Language & Communication, Language in Society, and the Journal of Linguistic Anthropology.