Municipal policymakers have turned Eskisehir into a vision of the model European-like city focused on waterfront restructuring projects. But not everyone has gained from their restructuring program.

In recent years, municipal policymakers and the public have proudly declared Eskişehir, Turkey, a Europeanized city and asserted the “Eskişehir model” for urban policymaking. The “Eskişehir model” assumes compliance with an image of a European city in which modernity is strengthened in ambitious redevelopment projects, in particular the Porsuk River riverfronts that run through city center. Since the early 2000s, Eskişehir’s built environment has been heavily restructured for beatification in ways that introduced new consumption and entertainment practices such as “having a beach and sea in the Anatolian steppe” and “becoming the Venice of Turkey,” as a municipal officer described to me. Yet the rhetoric and interpretation of a modern, European city depended on restructuring of city spaces while lacking reflection on other characteristics such as income measures, wealth distribution, or employment rates.

Turkey’s center-left Republican People’s Party (CHP), which leads Eskişehir’s municipal government, has aligned its urban policymaking agenda with a so-called European model in order to differentiate it from the pro-Islamist Justice and Development Party’s (AKP) urban renewal projects. While cities governed by the AKP have experienced uniform, serial production of urban projects and identical governance practices, Eskişehir claims to stand out with an image of a distinct urbanization experience and governance practices.

A river with muddy, depleted banks and a low amount of water runs through a town in Turkey.
Credit: Eskişehir municipal archives 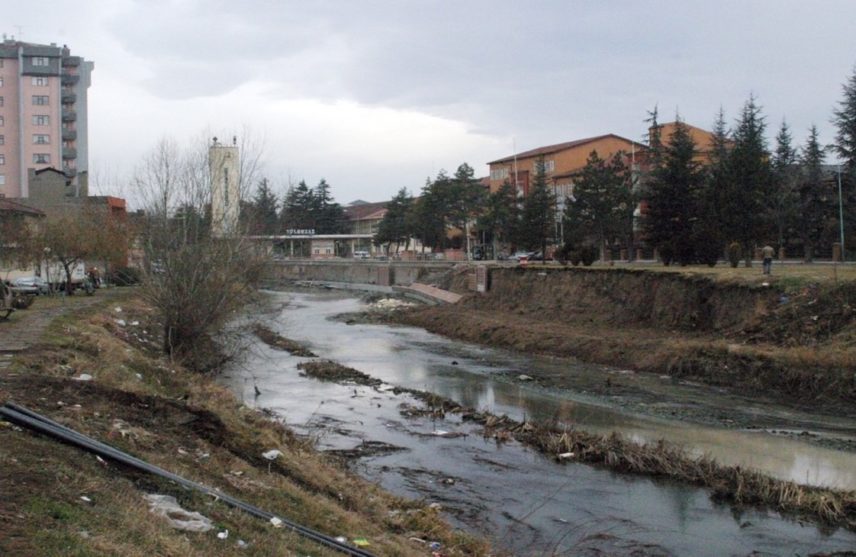 The Porsuk as seen in 1999 with the TÜLOMSAŞ Factory in the background.

With a population of 700,000, Eskişehir is a middle-size western-Anatolian city. Its urban restructuring process started in the early 2000s, to overcome three decades of stagnation. The 1970s-era Eskişehir, like many other examples of what anthropologists Ayse Çaglar and Nina Glick Schiller call “disempowered cities” across the world, could not respond to the pressures of neoliberalization after nearly a century of industrialization and fast urban growth, and entered a period of decline. It was considered underdeveloped in contrast to big cities such as Ankara or İstanbul. In 1999, a center-left mayor introduced a policy agenda distilled in the slogan “Recreating a modern and great Eskişehir again in the twenty-first century,” to recalibrate the sociocultural, political, and economic powers of the city. The “recreation” process, however, depended on urban restructuring following planners’ and policymakers’ homogenized understanding of what constitutes a European city, rather than reflecting on the merits of distribution and welfare systems to eliminate urban inequalities.

As cultural studies and policy studies scholar John Clarke wrote in a reflection on the significance of Stewart Hall’s work for anthropology, policies are produced within wider political and economic contexts that are configured in a historical conjuncture where multiple forces intertwine. Three historical events are commonly understood to underlie Eskişehir’s recent transitions: The 1999 İzmit earthquake and its disastrous consequence on economy; the 2000‒2001 economic and financial crisis; and the AKP’s victory at the national parliament, which left Eskişehir’s CHP municipality without adequate political and financial assistance to achieve its urban restructuring program. However, another development occurred in this conjunctural moment. In December 1999, the Helsinki meeting of the European Council gave Turkey official status as a candidate member. This new status permitted Turkey to benefit from European Union (EU) pre-accession facilities to stimulate necessary reforms, including financial assistance. At this conjunctural moment, time was opportune for Eskişehir’s center-left municipality to reinforce multiscalar networks and personal and institutional relationships for reaching out for financial support. The European Investment Bank and the Nordic Investment Bank agreed to finance the Eskişehir’s urban restructuring projects.

With the loans, the municipality constructed the light rail, mainly running through the city center, cleaned the Porsuk River and restructured its riverbed, and redesigned the landscape. Within a few years, the municipality constructed museums, concert halls, and statues, and introduced new consumption and leisure zones on the banks of the Porsuk river. With international finance, the municipality not only overcame its economic burdens and financed the first steps of its project toward restructuring. Receiving financial support from Europe was also a crucial contributor to the narratives and promises of “becoming a European city,” a “model city” of Turkey.

A river with a developed side bank, including neatly maintained grass and a bright brick wall, runs through a town in Turkey.
Credit: Eskişehir municipal archives 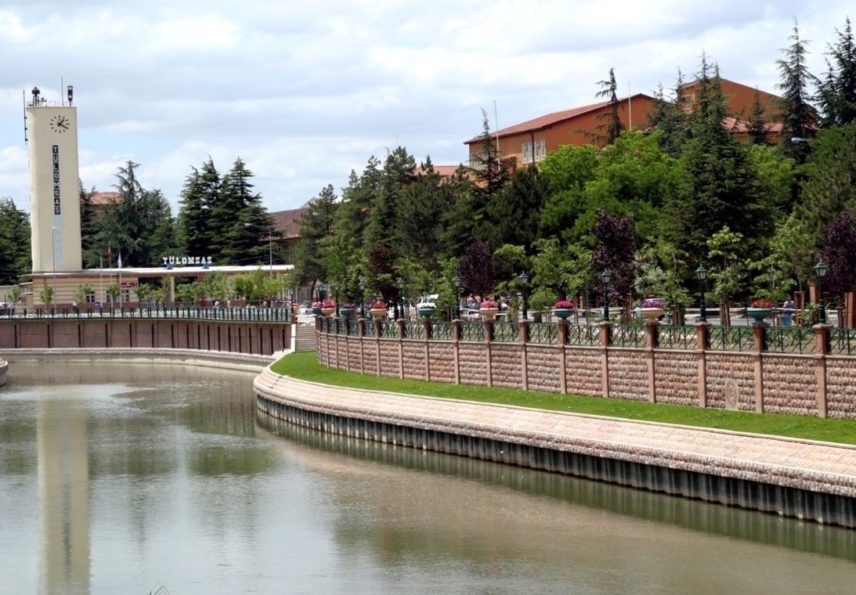 The Porsuk as seen in 2009 with the TÜLOMSAŞ Factory in the background.

Europeanization rhetoric has been furthered in terms of the new outlook of the city. During the restructuring process, the municipality claimed that urban policy models and urban design were adopted from European cities. Adoption meant travelling to Europe and observing urban built environments and urban landscape architecture. When I asked municipal officers during group interviews how they developed the restructuring ideas and whether there were policy models that were taken from elsewhere, they answered with one voice: “Europe,” “definitely Europe.” The homogenized answer reflects a homogenizing, totalizing view of Europe, which municipal officers described as having a modern, beautiful, orderly urban space. One officer claimed that the mayor is a genius:

He has traveled a lot, and when we started our project package I also traveled a lot with him within Europe. We have been to Vienna, Strasbourg, Amsterdam, Venice, and Prague. These are the cities the mayor loves the most and got his inspirations from […] For example, we see the lights and some decorations, some statues on the bridges, and the mayor likes them and takes notes and pictures, and we put similar decorations on the Porsuk. Or, for example, we are in Venice, we see the Venice-style boats, and the professor says we need to have some of these.

According to the officer, “if there is a good example of something already done in Europe and if it functions well there, […] why shouldn’t it function here?” He added that “all cities get inspirations from some other places.” Replicating a homogenized image of the European model into Eskişehir also meant for the municipality “spending less time and energy on urban design.” Cost- and time-saving concerns superseded other measures of merit, such as local needs from urban space or populations’ demands.

The urban restructuring program brought economic and political returns. According to municipal statistics from 2001 to 2015, the number of domestic tourists visiting Eskişehir increased by 435 percent while foreign tourists increased by 820 percent. A municipal officer explained to me:

Eskişehir, as a city which always takes leadership in Turkey for urbanism and city planning, not only became a model city for Turkey but also introduced a tourism alternative to the classical beach, mountain, sea, history tourism. Eskişehir became a city that attracts people from elsewhere to experience its urban life.

The municipality’s restructuring program has triggered consumption and entertainment. Several museums, municipal opera house, theaters, and concert halls opened in this time period. Large parks with a beach, aquarium, zoo, “castle of tales,” and coffee shops welcome tourist buses on weekends. These zones have gained the attention of construction companies, which have developed gated housing complexes. This zone attracts young people from surrounding cities for the night life, as those cities lack similar entertainment activities. Parallel to the Porsuk River, the municipality reorganized a street under the name Bar Street. The surrounding zone has become increasingly gentrified as university students and young middle-class residents replaced local residents. In a booklet published by the municipality in 2013, the mayor said:

Through our Urban Development Projects Eskişehir’s physical appearance has entirely changed, which also triggered social transformation […] Eskişehir’s streets have become alive. The service sector’s quality increased. Only 10 years ago a tourist would come to Eskişehir only by taking a wrong turn. Now, buses full of tourists arrive in Eskişehir.

Meanwhile, the discourse of the “Eskişehir model” became the marketing tool of the city. The municipal policymakers proudly claimed that the model inspires other national and global cities to say, “We can also achieve success.” The Porsuk River became an ornament of the city, exceeding its role as a natural asset and becoming an economic asset. As a municipal officer described, “The Porsuk paid back to the city far more than what has been invested in it. The Porsuk made the city a center of attraction for tourism. Even more, the Porsuk Project became a model for other cities that have rivers. We won several awards and became an inspiration for other cities.” The municipality offered its consultancy to other cities with rivers or waterfront areas, such as Afyon (a neighboring city), İzmir (a coastal city), Kars (eastern city), and Baku (Azerbaijan). Representatives of the district of Anderlecht in Brussels also visited Eskişehir a few times and showed interest in renewing their channel according to the model of the Porsuk Development Project.

An overhead view of the Porsuk Riverfront. In the foreground, an artificial beach and other recreation amenities. Inthe background, an expanse of buildings. Bridges connect islands and main land.
Credit: Eskişehir municipal website 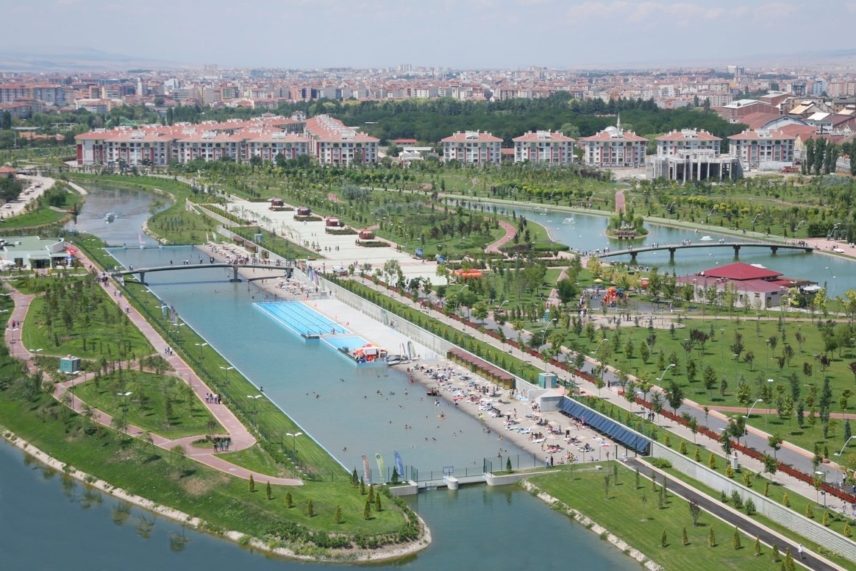 Kentpark with the islands of the Porsuk and the artificial beach in the middle.

Within 20 years, through a rapid urban restructuring program, Eskişehir achieved its goal of shifting from being a disempowered city toward creating a model city. The multiscalar networks and strategies the municipality used to connect to multiple individuals, organizations, and financial institutions facilitated the social and financial support for the urban development project package. Accruing support through an active search for partnerships and multiscalar networks at a particular historical conjunctural moment sparked an ongoing series of restructuring policies and projects on the Porsuk River that are still continuing today. Who gained and lost from this process, however, has not occupied the agendas of policymakers and public debates. In fact, the urban restructuring program has mainly created land speculations for residential and commercial purposes and intensified consumer culture. For instance, while the first shopping mall in the city opened in 2007 (right next to the Porsuk River), today there are tens of them throughout the city. Deindustrialized zones on the northern bank of the river, which did not receive any attention until the 2000s, have become the most expensive and popular areas in the city, occupied by restaurants offering global cuisine, American-style bars, night clubs, and international chain hotels. New housing complexes and commercial activities have favored the middle and upper classes while excluding lower classes and residents of the suburbs who deserve a more comprehensive future discussion about urban development.

Cansu Civelek is a lecturer at the University of Vienna and alum of the Middle East Technical University, Ankara. She completed her first documentary movie, Warning Karapınar! Voices from an Urban Regeneration, in 2015 and currently conducts research on pandemic policies and their influence on migrant households in Vienna