The comic antihero, the Punisher, has risen to fame alongside intensifying punitive governance. Right-wing appropriations of his symbol lay bare the connections between state and vigilante violence.

I first saw the Punisher skull at a prison in 2019. On a visit to Ohio to meet with women serving life sentences, I spotted the symbol on a tire cover in the staff parking lot. In the lobby of a Delaware prison, where I teach college classes, a silvery skull overlaid with a “thin blue line” flag shimmered in the background of a plaque.

I have spent many years inside of women’s prisons as an educator, collaborator, and researcher. Encountering the Punisher symbol there, in those punishing spaces, was both disturbing and unsurprising.

Prisons are among the most obvious appendages of the punitive state (Lancaster 2011), characterized by expanding security infrastructure, dissolving social welfare programs, and eroding civil liberties. Punitive governance is enacted, in part, through the redirection of public funds away from life-sustaining programs and toward war and carceral projects. The fetishization of individualism is critical to these developments. Structural explanations for poverty, dispossession, and oppression are elided by discourses about individual failure and responsibility. A racist and resurgent conservatism has waged war on wealth redistribution, government regulation, and the public good, leaving individuals to navigate systemic problems such as public hospital closures, environmental catastrophes, housing crises, and educational disinvestment. Individualism also informs shifting ideas about security. Private citizens, in new ways, feel compelled to protect home and homeland from “criminals” and racialized others, and the past two decades have witnessed revitalized militia movements and the passage of NRA-backed open carry and stand your ground laws in a growing number of states. While these trends have deep historical roots in the United States, they have accelerated with unique timbre in each decade since the 1980s.

The black tire cover on the back of a blue sport utility vehicle has a white Punisher skull stenciled on it. The vehicle is parked in a parking lot. The license plate information is blurred out. The background of the photo includes a chain link fence and overcast skies.
Credit: Emily Steinmetz 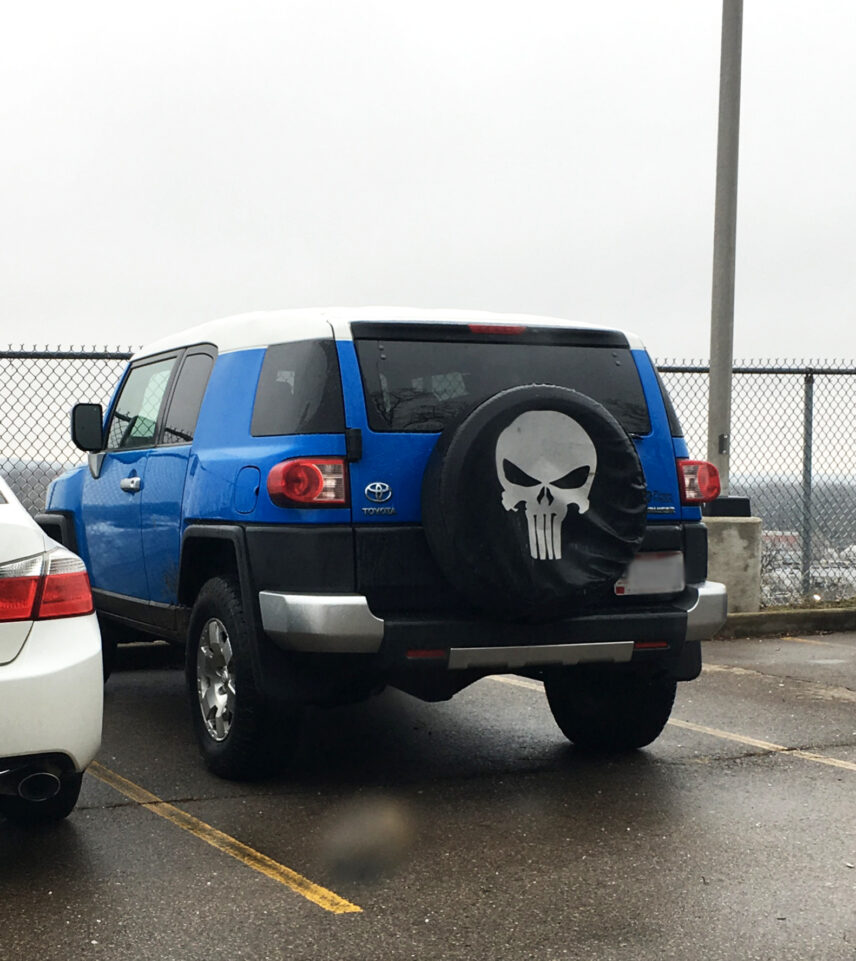 The Punisher skull on a tire cover in a prison parking lot.

The evolution of the Punisher (alter ego of Frank Castle), an antihero comic character, can be tracked against punitive governance trends and the expansion of the carceral state. He debuted in Marvel comics in the 1970s, his bloodlust a foil to heroes like Spider-Man and Daredevil. The skull, with angry eye sockets and hyperbolic incisors, is part of his costume. Writers and artists have reconceptualized the Punisher over time, and Garth Ennis’s reinventions for MAX, Marvel’s adult imprint, in the early 2000s catapulted the character to newfound popularity.

Violence across comics increased since the 1980s, yet the Punisher’s is extreme and spectacular. He kills quickly and often indiscriminately, equating justice with summary executions. He is a muscled, seemingly indestructible white man who has no superpowers. Instead, he leverages trauma, rage, military training, and awe-inspiring weaponry to wage his personal war on crime.

Not everyone who enjoys the Punisher valorizes his deeds. We can be entertained by and learn from antiheroes without endorsing their worldviews and tactics. Yet, the Punisher has become a cultural icon. His symbol is increasingly displayed among military, police, and white nationalists—and now in prisons. It indexes the violently punitive philosophies and vigilante currents that run through such institutions and movements, as well as the broader cultural moment in which it circulates.

Kathy, who I met in 2002 at the Baltimore Pre-Release Facility for Women, recounted a harrowing story of fleeing from a violent husband in the middle of the night, her four children in tow. When she tried to settle in a new home with no money and no social support, her checks for rent and groceries bounced. In Maryland, bouncing a check worth $500 or more is a felony, and she was sentenced to twelve years in prison. Due to a technical violation of parole, Kathy was incarcerated for a total of fifteen years.

Kathy’s imprisonment spanned from the mid-1980s to the early 2000s, coinciding with a period of massive prison expansion. The Wars on Drugs and Crime helped propel the number of incarcerated people from 1.15 million in 1990 to 2.3 million in 2008. Between 1970 and 2000, 1,152 new prisons were built across the country. Post-9/11, the Department of Homeland Security began offering police departments new funding to militarize, building on trends already under way. Most of the women I met at the pre-release facility were imprisoned for drug-related offenses, some of which were classified as violent felonies despite the fact that no violence was threatened or committed. The punitive orientation toward addiction—in a context where therapy, prescription medications (one woman described street drugs as “poor people’s Prozac”), and other supports were nearly nonexistent—took an exacting toll on poor Black women in Baltimore at that time.

My recent work with women serving life sentences (“lifers”) in Ohio illuminates the punitive intent and experience of extreme sentences. In Ohio, most lifers are eligible for parole, but the Parole Board more often issues continuances, or sentence extensions, rather than releases. While developing content for the States of Incarceration exhibition, our lifer collaborators dubbed life sentences the “Death Penalty on the Installment Plan.” In interviews, lifers described the Parole Board as capricious, opaque, and punitive. Margaret, in her seventies, has been imprisoned for more than forty years. Her sentence was “20 to life,” and despite her clean institutional record and minimal risk to the public—as she quipped, “What am I going to do? Hit someone with my walker?”—the Parole Board keeps issuing continuances. Mary, incarcerated since the early 1990s, told me: “No one seem[s] to know why I’m still sitting here. I’ve done everything that I know to do, and then some. And I’m trying to make a better life for me, but that’s not what [the Parole Board members] see.”

Spending time with imprisoned people brings into sharp focus the racialized and classist constructions of criminality. Notably absent from prisons are rich and powerful people, despite the far greater material and physical dangers they pose. A conservative estimate puts the damage of the Savings and Loan crisis of the 1980s, which occurred around the time of Kathy’s bounced checks, at $150 billion. Convicted bank executives and lawyers received short or no prison time—an average of two years, compared to Kathy’s twelve. The 2008 financial crisis had far more devastating consequences and even less accountability; to date, no bankers or attorneys have been charged. And despite evidence of pharmaceutical company and distributor responsibility for the opioid crisis, they are difficult to prosecute. Meanwhile, jails and prisons continue to fill with poor people who struggle with addiction.

Carceral logics and institutions straddle prison walls, shaping daily life in sprawling ways that dispossess and a priori criminalize, surveil, and mark as dangerous certain bodies (see Gilmore 2007; Gottschalk 2016; Wang 2018). Poor people’s immediate material and safety needs are ignored as their survival strategies are criminalized. Carcerality also works in inverse: it insulates privileged and powerful people despite the harm they cause.

Nine white outlines of a skull against a back background, each colorfully and humorously embellished. From top center to bottom right: (1) the teeth are covered with a pink shape to make it appear it is sticking out its tongue; (2) the skull is wearing white-rimmed glasses and has red eyeballs; (3) it has bushy eyebrows and a handle-bar mustache; (4) this skull is in the center of the image, and it has a clown nose, blue stars over its eyes, a smiley face, and red stripes on its head; (5) the skull’s teeth are transformed into a basket and the head into colorful flowers; (6) the eye sockets are covered with red hearts; (7) the eye sockets contain pink googly eyeballs; (8) the eyes are covered by blue circles; and (9) the last skull, in the bottom right corner, is filled colorful with polka dots.
Credit: Forest Bright 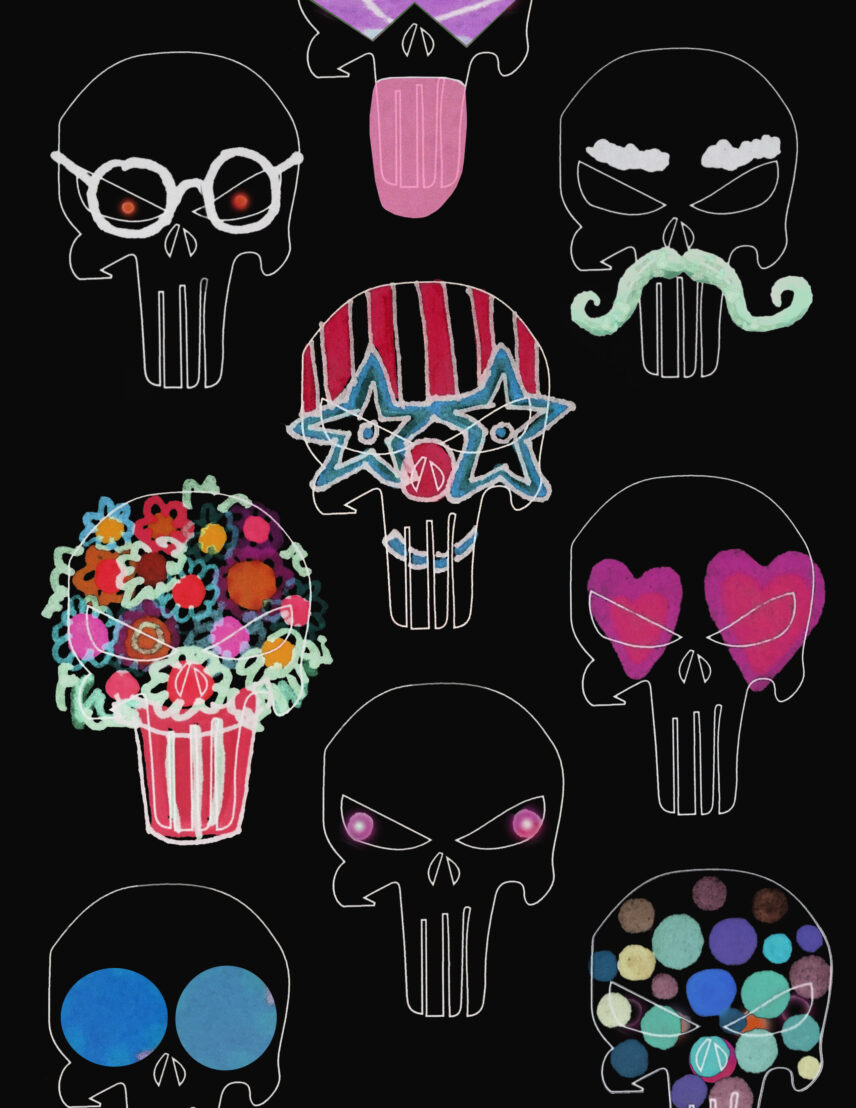 In creating artwork about the Punisher, a challenge was to engage the symbol in ways that do not reproduce its current meanings. Visual artist Forest Bright suggests that we can divest symbols of their power through repetition and mockery, as he does here.

Vigilantism and the State

Recent commentaries have pointed to the supposed paradox of police and military use of the Punisher symbol. Such analyses presume that state and extralegal force are distinct, overlooking the longstanding, ambivalent relations between them. Vigilantism in its varied forms challenges the state’s monopoly use of violence, but it is also historically intertwined with the state.

State agents have participated in vigilante movements, evidenced by the enduring history of police colluding with and flowing in and out of white vigilante groups like the Ku Klux Klan. Relatedly, state agencies sometimes act as, or actively mobilize and support, vigilantes. At different moments in the 20th century, local and federal agents enlisted and financed right-wing groups like the Minute Men to violently suppress union, antiracist, and anti-war organizing. The FBI’s COINTELPRO used illegal spying, disinformation, and violence to undermine social movements. The US Senate’s Church Committee later called the program a “sophisticated vigilante operation” (McCoy 2009). In some cases, vigilantes operate with tacit state support. Anti-immigrant groups have acted both against and alongside the state, using citizen’s arrest statutes and open carry laws to surveil and terrorize migrants along the US border with Mexico. Kyle Rittenhouse, who shot and killed two people at a Black Lives Matter protest in Wisconsin, has become a celebrity among the right, with police officers and politicians donating to his bail and legal defense. Angela Davis draws throughlines from past to present, arguing that killers like George Zimmerman, who murdered Trayvon Martin and was acquitted, “replicated the role of slave patrols. Then as now the use of armed representatives of the state was complemented by the use of civilians to perform the violence of the state” (2016, 16).

The Punisher skull is sometimes blended with other symbols like the US and “thin blue line” flags, complicating and collapsing distinctions between vigilantism and the state. Air Force Veteran Eric Munchell, the now-famous “zip tie guy” who invaded the Capitol on January 6, 2021, sported a Punisher symbol imposed on a US flag. The plaque in the Delaware prison fused the pro-police flag with the Punisher.

As such remixed Punisher symbols suggest, lines between legal and extra-legal, between state and vigilantism, can be blurry. The slippages between them are inconsistent but nonetheless systemic, and they sometimes work together to preserve white supremacy and racial capitalism.

I might have anticipated the Punisher at the prison. While prison staff are diverse in their actions and orientations, sadism and revenge—defining qualities of the Punisher character—are foundational to the broader carceral project. Imprisonment routinizes deprivation, neglect, and extralegal and everyday violence. Like the Punisher, the criminal-legal and punishment systems have little regard for people’s varied and complicated realities, for our interconnected lives and histories. The Punisher reflects back to us entrenched cultural currents that privilege the reactionary and punitive rather than solving problems of violence and harm.

Gerry Conway, co-creator of the original Punisher character, suggested that Black Lives Matter activists reclaim the symbol from police. However, its referent will always be a narcissistic and delusional character, a white man who feels authorized to decide single-handedly, and violently, the fates of everyone around him. The Punisher is profoundly unimaginative. His are not qualities that can be reappropriated for a transformative vision of justice that activists, and this moment, demand.

Emily Steinmetz is assistant professor of anthropology at Washington College in Chestertown, MD. Her scholarship focuses on carcerality and persistent structural inequalities in US life. Her recent work includes collaborative and public-facing projects with women serving life sentences in Ohio.