VR technology can immerse people in real-world situations. Could these experiences open minds and affect social and political change?

Do you know what it’s like to be unhoused? To live in a refugee camp? To have ICE interrupt a family meal while searching for an undocumented relative? Perhaps more importantly, do you know what it feels like to experience these various situations?

The distinction between knowing and feeling is important. It has long been considered critical in anthropology, given as a reason for anthropologists’ embrace of fieldwork as a methodological practice that leads to better understanding and representation of humans in the world. This distinction between knowing and feeling also strikes at the heart of how virtual reality (VR) can be applied effectively to activist work. Though VR may not allow us to actually walk in the shoes of another, it can give viewers embodied clues about what it feels like to negotiate the sociocultural, political, and physical contours of the worlds inhabited, negotiated, and reshaped by marginalized people. This is an important first step in affecting change. VR technology and filmmaking is particularly powerful as a tool for activism when paired with existing immersive, collaborative, and place-focused theories and methods.

Although many early VR filmmakers began by exploring the experiential “thrill” of extreme sports and taboo locations, they soon began to wonder if these kinds of experiential realities could be translated into human stories about disadvantaged and marginalized communities. Could the immersive nature of VR experiences be leveraged to produce the empathy required for progressive interventions? An early breakthrough was Chris Milk and Gabor Arora’s 2015 documentary Clouds Over Sidra, which chronicled the experience of a 12-year-old Syrian refugee in the Za’Atari refugee camp in Jordan. The film foregoes a linear narrative structure and instead opts to follow Sidra around on a typical day, allowing the viewer to experience the spaces of the camp alongside Sidra’s narration. Funded by the United Nations and Samsung, the film not only raised awareness about the Syrian refugee crisis, it was also used as a centerpiece for successful fundraising efforts at the World Economic Forum in Davos, Switzerland, in January 2015. Between those efforts, and a spirited street campaign by UNICEF, one out of every six people who saw the film donated to relief efforts― bringing in almost twice the  amount of money that was originally projected.

Why was this film so impactful? Clouds Over Sidra does not focus on historical detail, but instead on spatial experiences and presence, which are uniquely represented in VR filmmaking. For most viewers, this film, like many VR films, produces a sense of what it feels like to “be there.” This is achieved using a 360-degree view combined with spatial audio, which creates a more powerful sense of immersion―one that was unavailable with previous filmic technologies. Cameras are carefully placed to replicate the experience of traveling, eating, walking, or learning alongside those in the film. The viewer becomes one among many, observing interactions that occur around them in real-world spaces that are fraught with human relationships, emotion, and sociopolitical entanglements. The placement of the viewer interpolates them into the spaces, predicaments, and stakes of those in the film.

VR can be a particularly powerful platform for motivating social change when paired with already existing immersive tools and methods, including those offered by fields like immersive journalism and anthropology. Like anthropology, immersive journalism has long emphasized the importance of the journalist “being there” to better understand and represent human struggles. As such, immersive journalists offer many great examples of how VR integration can provide experiential ways of feeling and knowing to a broad audience, making journalistic products even more powerful motivators for social change. An example of this is pioneering journalist Nonny de la Peña’s film Hunger in Los Angeles (2012), which was the first VR film to be featured at the Sundance Film Festival. This film featured audio recorded from a line at a soup kitchen. In one compelling scene, a person faints in line, right beside the viewer. The authenticity of the audio recording produces a great deal of tension in this situation, so much so that viewers instinctually spring into action, kneeling to try to help the person who fainted. Another breakthrough in immersive journalism is the Guardian’s (2016) eerily immersive simulation, 6×9: A Virtual Experience of Solitary Confinement. The film places the viewer inside a reconstruction of an average US “supermax” prison solitary confinement cell, which measures 6×9 feet, and lets the voices of eight previously incarcerated people tell their stories about the experience. The space of the cell changes over the course of the film, reflecting the hallucinations, delusions, and paranoia derived from the real-world experiences of the narrators. It’s a harrowing experience that makes full use of the synesthetic qualities of VR headsets. It is also a powerful indictment of the inhumanity of keeping people in these conditions over long periods of time. 6×9 is a visceral representation of this experience and a valuable tool for the contemporary abolitionist movement.

While immersive journalism emphasizes the importance of “being there” and extends this to an audience, sociocultural anthropologists approach representation and authorship, and thus use of VR film, in a slightly different way. First, anthropologists often work to deconstruct understandings of place, approaching places as culturally meaningful sites that are fraught with systems of oppression while also retaining the potential for resistance. Anthropologists also center immersive research methods, like participant observation and long-term fieldwork, as a defining feature of the discipline. The critical approach to considerations of place, the longer time periods spent in the field, and the deeper engagements with community members, which are hallmarks of ethnographic fieldwork in anthropology, create the conditions for more productive and representative VR collaborations between researchers and local stakeholders. As such, the intent in anthropological filmmaking is not to simply replicate reality―to make the viewer feel like they are authentically there―but to reference it to inspire creative imaginings and positive interventions. This means that anthropological filmmaking may include more scripted elements and direct calls to action, or both. Rather than documenting real-world spaces, ethnographic VR experiences emerge from collaborative efforts to represent those spaces in an immersive fashion, to compel the cocreation of imagined futures.

Over the past eight years, several students in the “New Media Ethnography” course at California State University, Long Beach, (CSULB) have produced VR films that represent this kind of anthropological filmmaking, maintaining an ethnographic focus and an activist bent. Katherine’s film, Conozca Sus Derechos (Know Your Rights) focuses on a scenario in which ICE agents, seeking to take someone into custody, interrupt a family’s evening at home. The film places the viewer in a family’s living room amid a mundane conversation, moments before ICE agents knock on the front door. Interspersed with the encounter are several informational graphics. At critical moments, the viewer is offered information about what ICE agents can and cannot do legally, as well as what the family members’ rights and options are. This film was intended to educate and empower people to resist insidious rights violations by law enforcement, especially those who may be endangered by deportation and family separation. More performative than observational (the film required a cast and a script), Conozca Sus Derechos illustrates how applied simulatory VR experiences can be a useful device in the service of activism.

Scott’s first effort in ethnographic and activist VR documentary production was entitled Birthplace of the People: A Tongva Origin Story (2020). The film centers Tongva storyteller (and CSULB faculty member) Cindi Alvitre’s narration of the world’s creation and the murder of the Tongva god Wiyot. This event is significant to Indigenous People of Southern California, in that Wiyot’s death facilitated the first gathering before the time of humans. The film pairs Alvitre’s narration with three-dimensional artwork created by artist Carly Lake using the VR art program TiltBrush. Katherine recorded with a virtual VR camera to guide the viewer through the artwork, which illustrate key moments in the story. Through this film, viewers can experience the multiple dimensions and relationships inherent in the land itself. Viewers are also reminded of the everyday presence of colonialism: the space of gathering in the Tongva Origin Story is Puvungna, located on and beyond the land on which CSULB is built. Puvungna has been, and continues to be, a point of contention between the university, the Gabrieleño-Tongva people, and previous generations of archeologists. Part of a larger push to resignify Indigenous lands in California and make CSULB students aware of the sacred site located on their campus, the film was implemented as a key component of first year CSULB student orientation presentations. A collaboration between community members, local artists, CSULB faculty members, and students, this film is a visceral land acknowledgement and embodied call to action as these sacred spaces remain under threat of destruction.

A crowded outdoor protest scene from the perspective of the protesters who are arranged in a U-shape, looking toward a human line of police officers in riot gear. In the foreground is a red and black square protest sign being held up on a stake. The sign displays a hand-drawing of a white snake with its head detached from its body. Over the drawing of the snake are two black boxes containing the words “always antifascist.”
Credit: Katherine Scully 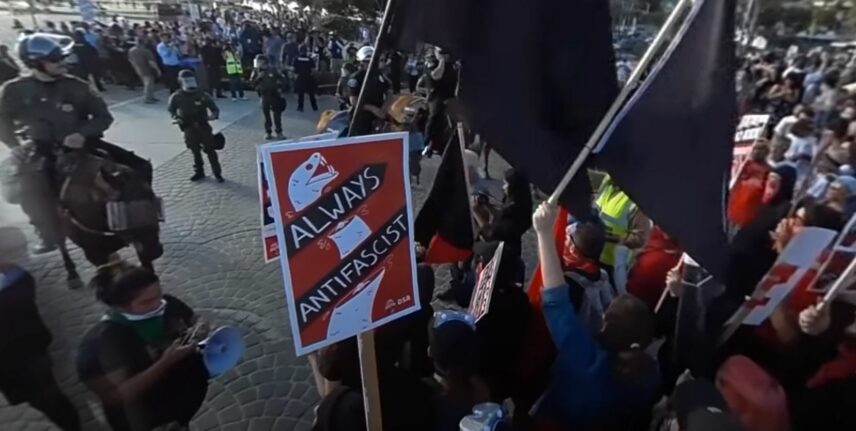 A still from the VR film Humanity First! about a “vigil for white lives” and counter-protest in 2016.

In another consideration of perspective, small portable VR cameras might also have a place in documenting instances where state violence and injustice can occur.  What happens at events, like police checkpoints and protests, may be contested or misconstrued, depending on perspectives and biases. With non-VR recordings, there remains the potential for a limited perspective as recordings are captured within a frame, meaning that the person doing the recording leaves things out of the frame, intentionally and unintentionally. However, given its 360-degree footage, VR film can lessen this possibility as it adds more depth, showing spatial relationships and interactions between various people at the scene, beyond the frame of the main occurrence. This filming capacity adds context through literally and figuratively broadening perspective. This is why the relatively inexpensive and portable VR cameras now available could be effective for a wider range of everyday documentation and should become standard for any protest or event that could potentially end in violence.

The relationship between VR and activism is an emergent one. The technology has no intrinsic value beyond the ways in which we use it. Yet VR can be meaningfully deployed to provide viewers with experiential knowledge about what it feels like to be present in a place and a time, to experience multiple forms of positionality, and to negotiate the contours of various worlds. This makes it a powerful tool for activist practice.

R. Scott Wilson is chair of the Department of Anthropology at California State University, Long Beach, where he teaches courses on identity, new media ethnography, anthropological theory, and contemporary Chinese society. Born in Stanley, North Carolina, he received his BA from UNC Charlotte, and his MA and PhD from Stanford University.

Katherine Scully is an artist, a creator of experiences, and an applied anthropologist. They received an MA in applied anthropology from California State University, Long Beach. Their thesis, “Advertising Utopia: Queer Expressions and Hope in Online Personal Ads,” utilized queer and feminist theories, autoethnographic and decolonizing methodologies, and was presented as an immersive installation.