From Ed's Desk
Cite this article

Which is better for the environment, a reusable ceramic coffee mug or a disposable cup made of paper or Styrofoam? Nearly 30 years ago, Canadian chemist Martin Hocking published a study that estimated the energy cost of manufacturing a reusable cup and then cleaning it over its lifetime, compared with the energy costs of a disposable cup’s manufacture and use (the disposable cup was assumed to be used just once and never washed). His findings were surprising. You’d have to reuse a ceramic cup more than 1,000 times to achieve a savings over Styrofoam disposables and about 40 times to achieve savings over paper disposables.

My workplace coffee mug, from which I was as inseparable in 1994 as I am now, was already eight years old when I read Hocking’s article, and I gave myself a pat on the back for all the disposable cups I had avoided. Yet over the years, I accumulated millions of air miles in my previous career consulting on environmental health policies and their impacts.

A tan-colored coffee mug with grey horizontal stripes sits on a green disc atop a wood surface.
Credit: Ed Liebow 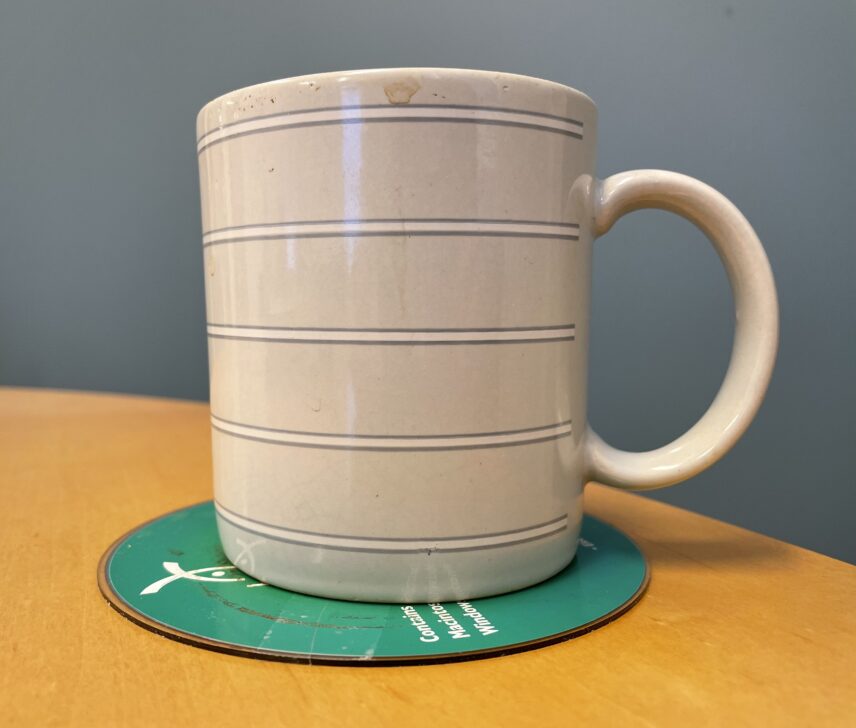 A coffee mug I bought the first day on the job, May 1986. Its coaster is much newer, a CD containing the operating system from my state-of-the-art Palm Pilot, c. 2000.

Sure, life is filled with tradeoffs, and practically none of our choices eliminate environmental costs altogether. Ceramic mugs may be better than their disposable counterparts over the long run, but they are not impact-free. Electric autos have lower emissions than even the most fuel-efficient gasoline-powered vehicles, but they still need electrical power to run, and they had to be manufactured somewhere.

Waste-related hazards are among the most difficult problems we face. We have invested a considerable amount of resources in improving our preparedness and protective response capabilities, and in establishing accountability for this investment. At the same time, the vital problems that we must not lose sight of in holding ourselves accountable include the risks of not being ready when a public health response is called for; the risks of distributing protective responses unfairly; and the risk of thinking only about short-term interventions.

I have had nearly four decades of research involvement with large-scale industrial wastes of several sorts: hazardous chemicals left behind when manufacturing moves offshore; power plants; the highly toxic byproducts of desalting plants; and chemical, nuclear, and biological weapons manufacture. All this waste is generated as the result of choices, putative large-scale benefits traded against localized burdens. But the accumulations of localized burdens are now nearly everywhere, and we collectively face a set of choices in how to change so we can better deal with these inescapable environmental consequences. What kinds of waste-producing activities will we tackle first? How can we pinpoint the more accessible upstream intervention points, where the most sustainable changes are also the most feasible to accomplish?

Change is hard, and inevitably meets with resistance in some quarters. Overcoming such resistance means dealing with a more encompassing set of value orientations that involve fundamental notions of liability (I am reluctant to change if there is a risk things will get worse, and I am unsure about who will be responsible for making things right) and fairness (why should I be asked to sacrifice more than my fair share, especially when I see billionaires and their tanker-class yachts?).

When it comes to liability, depending on the setting, emphasis may be placed on personal responsibility (I did something that led to my being vulnerable, and must [as well as have the ability to] take some responsibility for protecting myself), shared responsibility (we are all complicit in the circumstances that led to our being vulnerable, and we must [as well as have the ability to] come together to protect ourselves), or third party responsibility (no responsible party can be identified, and we doubt our individual or collective efficacy to protect ourselves, so we will invest in a third party to afford us this protection).

In the United States, despite the great rhetoric of American individualism, in fact, in times of crisis, including slow-onset crises like those produced by industrial waste, we rely quite heavily for protective preparedness, response, and recovery assistance on a third party, namely, the government. Why the government? Some of our preparedness problems are nearly intractable, and therefore quite unattractive to businesses who might otherwise be incentivized to seek solutions. In these instances, the risks may be so acute—or so dispersed—that they cannot be efficiently treated or disposed of. No proven remedy may exist to address the risk. The specific source of the risk may be difficult to detect, and there may be no party that can be held accountable for mitigating the risks. Or there may be considerable uncertainty or disagreement over whether the risks are, in fact, related to an identifiable source. Agricultural chemical runoff that accumulates in watersheds, urban sprawl and its indirect effects on greenhouse gas emissions from transportation demand and building materials, packaging of foods and other consumer goods―waste from these sources really add up! In these circumstances—where no obvious perpetrator can be identified, where sources of environmental threats and transmission of emerging infectious diseases span jurisdictional boundaries, where prescriptive action is difficult in the face of uncertain science—we call on the government to step in and take care of things.

Unfortunately, at the same time we count more on the government to provide a protective response, we vote to restrict the resources available to do so. Moreover, we evaluate the government’s performance by an unrealistic set of standards, and some politicians take a punitive position, proposing to withhold funds because waste reducing efforts have failed to meet expectations. From my perspective, a substantive challenge arises when the waste control problems the government must deal with are nastier, more dispersed, and more difficult to detect. Should the same standards apply in gauging how well the government deals with these hazards? This business of standards is important because performance standards can redirect organizational focus away from vital problems in the name of accountability.

In case I wasn’t clear, I am convinced that waste prevention and control are existential real-world problems, problems that have as much to do with equitable institutional arrangements as they do with chemistry and environmental science. Who in the real world is better positioned to tackle these problems than our anthropological community?

Ed Liebow is executive director of the American Anthropological Association.