What Did the Moon Landing Do for Archaeology?

By now, with all of the retrospectives, books, and stories that have appeared attendant upon the 50th anniversary of Apollo 11’s landing on the moon, you’d think we’d know better. NASA (National Aeronautics and Space Administration, created in 1958) did not invent Tang and Velcro for the Apollo missions. It is true that the moon landing has created many products that have found places in our scholarly and personal lives today. I’ve used a space blanket in the field for years, created by NASA, and made from a derivative of insulation material used in spacesuits and spacecrafts. Other products leave me a bit cold and aren’t NASA’s fault. For instance, Nike is selling some awesome PG 3 X NASA sneakers (using blown rubber technology developed by NASA for the space program!); and Timex sells a “Snoopy in Space” watch. If this is too déclassé for you, Omega sells an Apollo 11-themed watch for more than 26,000 GBP; and Lego offers a lunar landing module that’s actually pretty cool. Ok, enough fun.

Many of us still make assumptions about how the moon landing transformed different scholarly disciplines in the sciences and engineering and helped to make them what they are today. At least as far as archaeology is concerned some of those assumptions are misleading while others are correct. I’m being deliberately provocative and disingenuous, but it is true that the moon landing did not do much for archaeology. Yet, the space program and the space race, the military-industrial complex of the late 1950s and 1960s, along with other lines of research, created the fundamentals of what we use in spatial technology in archaeology today.

We use the global positioning system (GPS) constantly in our work. I’ve seen news stories recently claiming that NASA developed the GPS system. No, NASA did not create GIS—its history is well known and parallel to the space race. The Defense Department began development of that system in the 1970s, but before that, the first effective satellite-based navigation system was developed in the late 1950s by the Advanced Research Projects Agency (now known as DARPA) for the US Navy and the TRANSIT project. For the Apollo program, NASA relied upon a purpose-built and absolutely extraordinary terrestrial and ocean-based tracking system. Some of these US Navy satellites also were pressed into service for geodetic survey.

Archaeologists have long used some form of aerial imagery in their research, be it taken from kites, balloons, or airplanes. The earliest space-based platforms for taking images of the earth were created for branches of the US military but it was the National Reconnaissance Office (NRO, created in 1958), an agency of the US Defense Department that had oversight of photographic reconnaissance programs such as CORONA and many others that remain classified. NASA had no role to play in the NRO programs but it did launch its own satellites—specifically Surveyor 1 and the Lunar Orbiter platforms—that took very detailed images of the moon’s surface as part of an effort to find suitable landing sites for the Apollo missions. Apparently none of the cameras of these systems was ever trained on the earth itself. However, the potential of imagining the earth from satellites was stimulated, in part, by the pictures taken by astronauts during the Mercury, Gemini, and Apollo programs. Despite opposition from the Defense Department and others, and with the advocacy of the US Department of the Interior, funding was created for the eventual development of the Landsat program, which was first named the Earth Resource Technology Satellite. The imagery derived from this program, which is fully digital and includes multi-spectral bands, is used extensively by archaeologists. In this sense, the moon landing and its predecessors contributed to the eventual deployment of this series of satellites. 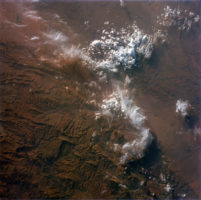 Computers are essential to spatial technologies and they had a major role to play in the Apollo missions. In the 1960s, computer technology began to transition from vacuum tubes to transistors, then integrated circuits. I’m sure archaeologists of my generation can tell horror stories about our experiences with computers—punch cards, reams of paper generated, and the sheer size of the devices, which often took up whole rooms and required special environmental controls. Obviously, while those monsters could be and were used by Mission Control to model fuel usage and compute ideal flight trajectories on the ground, they were not exactly going to fit within any Apollo space module. What was needed was a small computer that could execute simultaneous tasks, had a low (read zero) failure rate, and was (relatively) simple to use. None existed at the time. 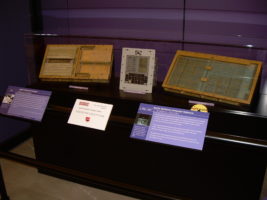 The components of the Apollo Guidance Computer. In the center of the image is the input device; it is flanked by the containers for the circuit boards and memory. Carlo Nardone/Flickr (CC BY-SA 2.0)

Scientists at the MIT Instrumentation Lab did what seemed impossible: they created a bespoke, hand-made computer based not on transistors (they had tried one using them earlier but the device really wasn’t up to the tasks required of it) but instead integrated circuits—what we call today computer chips. Known as the Apollo Guidance Computer, this amazing technological feat got the astronauts there and back. It wasn’t easy and NASA’s own history of the development process offers a sobering picture of the obstacles in traditional programming that had to be overcome. The Apollo missions literally revolutionized software engineering and created the market for computer chips. IBM eventually saw the light in the late 1960s, and switched over to chips in their devices, as did every other computer manufacturer. The moon landing serves as a reminder of an important anthropological principal—innovation does not happen in a vacuum but emerges from the interaction of complex social, economic, and political factors.

The next time you fire up your favorite GIS software or other spatial analysis program, make sure you say thanks to NASA and the Apollo missions, and to extend your gratitude for your iPhone.

Mark S. Aldenderfer is John D. and Catherine T. MacArthur Foundation Distinguished Professor of Anthropology at the University of California, Merced. He is known for his contributions to quantitative methods and geographic information systems in archaeology. His research focuses the comparative analysis of high altitude cultural and biological adaptations from an archaeological perspective. Since 1997, he has conducted research on Buddhist and pre-Buddhist occupations in the Himalaya through field research in far western Tibet.