When confronting disaster, there are lessons to be found in Himalayan conceptions of the world.

It is certain that a world in destruction moves us to reflect on the worlds we wish to create, rebuild, and leave behind. We can see this in anthropology, where in the past few years there has been a proliferation of writing on world building, world making, the end of a world, one or many worlds. Yet before speculating on possible and impossible futures, it is worth asking what a world is. I learned this when I was conducting fieldwork on mental health governance in Nepal and a 7.8 magnitude earthquake and 7.3 magnitude aftershock ruptured the earth, killing over 9,000 people and leaving half a million homeless.

In response to the seismic rupture, humanitarian organizations arrived with funding to mitigate an emergent “mental health crisis” in a country where mental health had not yet been incorporated into the health care system. As psychosocial counselors flooded the 14 affected districts, over 300,000 people received psychiatric and psychosocial support services, many for the first time in their lives. Based on collaborative ethnographic research alongside a leading Nepali NGO, my work explores the psychic life of disaster. Set in the time of the 2015 earthquakes, this project moves between Kathmandu NGO offices and earthquake-affected communities as it tells the story of the existential and lived experience of disaster, and the forms of care that follow in disaster’s wake.

My encounters with survivors in earthquake-affected villages revealed unexpected responses to a world in destruction. Landslides, aftershocks, and the ongoing deconstruction of the earth generated existential dizziness and philosophical reflections on the nature of world, sansar. In the counseling circles assembled in the midst of ruin and rubble, people became philosophers of their lives. When asked how they were doing after losing their homes, many simply said, “sansar estai chha” (the world is like this) and “dukha-sukha estai chha” (misery-joy is like this).

A blue-tinted image of a snow-capped, double-peaked mountain with clouds in the background.
Credit: Aidan Seale-Feldman 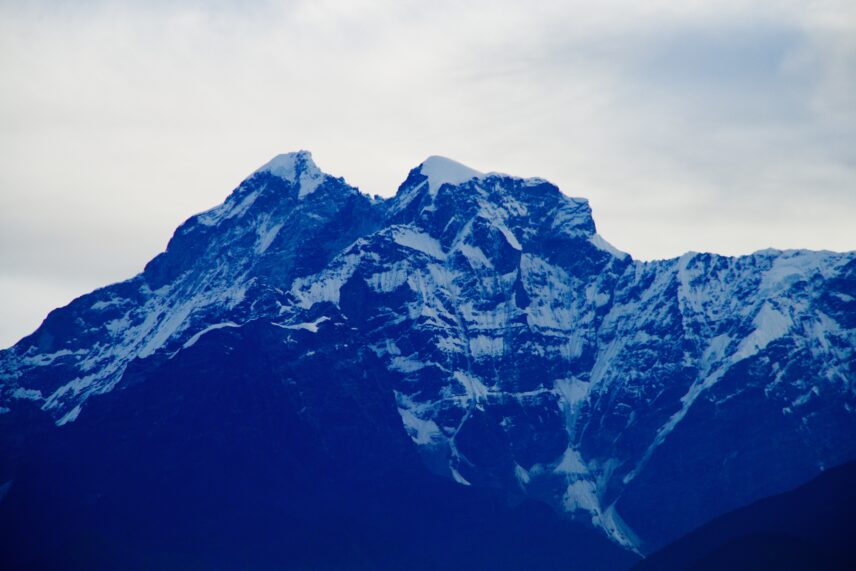 Gaurishankar (Tibetan: Jomo Tseringma), a 7,181m sacred mountain in the Nepal Himalayas, as seen from an earthquake-affected village.

In order to understand what it means to say “the world is like this,” one must first ask what in fact “world” is. This is a question that was taken up by Heidegger in a series of lectures in which he set out to define world through a comparative examination of the “specific relation” that different beings (stone, animal, man) have toward it. It is in this work that Heidegger famously argues that the stone is worldless, the animal is poor in world, and man is world-forming. To be worldless, according to Heidegger, is to lack the ability to recognize oneself as a being among other beings. In this anthropocentric vision, only “Man” is world-forming, that is, capable of having, accessing, penetrating, and projecting the virtual into the actual.

As opposed to a notion of world as something that can be possessed to greater or lesser degrees, in the Himalayas we encounter a concept of world as illusion and impermanence. In the Nepali language, sansar translates both as world, planet, universe, and the endless cycling of death and rebirth. Sansar is drawn from the Sanskrit word samsara, defined as “the course or circuit of worldly life, worldly affairs, secular life, mundane existence, the world,” and is synonymous with illusion. In both the Hindu and Buddhist traditions of the Himalayas, the aim of living is to achieve liberation from worldly illusion, and thus exit the agonizing oscillations of misery-joy, dukha-sukha, that define the condition of human existence. This concept of world inspires a reconsideration of anthropological reflections on life and loss in times of disaster.

What does it mean to lose a world if world is illusory and impermanent, and liberation is freedom from attachment to world?

To say that “the world is like this” at first glance suggests a passive and apolitical response to disaster. The idea that a karmic understanding of life is a form of uncritical acceptance of suffering, domination, and inequality has been critiqued in Nepal as an obstacle to development and modernity. Dor Bahadur Bista, the “father of anthropology in Nepal” famously argued that such notions of fatalism were so widespread that they had become obstacles to social and economic development. Yet as Sara Lewis has shown through her work with Tibetan refugees in Dharamsala, the concept of karma, expectations of suffering, and an understanding of world as illusion can support resilience as opposed to psychotherapeutic approaches that insist on debriefing by returning to the source of suffering again and again. As Lewis writes, for the Tibetan Buddhist refugees with whom she worked “techniques such as thinking of all the others in the world who are experiencing similar (or worse) problems and wishing for happiness for all sentient beings are considered very skillful ways of working with distress” (2020, 53).

At the same time, to say that “the world is like this” also speaks to the differential expectations for livability between those for whom disaster is a surprise, and those who have long been living in precarious, post-apocalyptic conditions. In the varied responses to the destabilization of the earth, we are confronted not only with different conceptualizations of world, but different expectations and thresholds of livability.

As our present is increasingly defined by cascading disasters, rising temperatures, and global pandemics, there has been a growing acknowledgement of the relationship between environment and mental health. Terms like solastagia and eco-anxiety have entered into the English lexicon as ways of speaking about “earth emotions”—the emotional impact of environmental crisis and the grief, experienced or anticipated, that accompanies loss of place in a rapidly transforming planet. Perhaps one answer to the anxiety, the fear, the existential dread is to rethink the meaning of “world” entirely. Instead of imagining that a world is something that can be possessed and lost, we might consider a Himalayan philosophy that always already understood the futility of grasping.

Aidan Seale-Feldman is an assistant professor of medical anthropology at the University of Notre Dame. Grounded in ethnographic explorations of disaster, mental health, and mass hysteria, her research asks how to approach forms of affliction that are not bound within the individual but instead move across bodies, environments, and generations.