What’s the Point of Sections?

Scholarly and scientific organizations are funny beasts. They have some clear reasons for existing, but they sometimes hover between professional guild-like associations and friendly social clubs. If they’re large enough, they can play a role in lobbying state representatives to try and effect some positive changes for the conditions in which we carry out research. If they’re small, they can be intimate opportunities for every member to benefit from mentoring and exciting collaboration opportunities. The American Anthropological Association (AAA) is one of the larger professional anthropology associations in the world with more than 9,000 members—though to put that in perspective, the American Medical Association has just shy of 220,000 members, so even a large anthropology association is relatively small. The AAA is a large enough tent, however, that it becomes unrealistic to expect intimate opportunities for all members all of the time, and is one of the reasons why the AAA has sections. It’s at the section level that we can hope to know (almost) everyone—this is particularly true of the small and medium sized sections.

I joined the AAA in 1999 as a PhD candidate freshly back from fieldwork in Pakistan. I joined the Middle East Section (MES) because Fadwa El Guindi was president at the time and I liked her and her work and wanted to give her a reason to get to know me and my work better. At the first MES I attended, we all introduced ourselves and when I said I work in Pakistan, the person sitting in front of me said, “Pakistan’s not in the Middle East.” Before I could babble out an inadequate response, Fadwa said, very loudly, “We’re the Middle East Section—we’re the ones who decide where the Middle East is!” She was joking, of course, but she was trying to do what good section leaders do—make the nervous, insecure newcomer feel welcome. She didn’t do this to build a friendship network or have a cosy social club. She did it because she understood that if you exclude people, however jokingly your intent, then you drive them away from your discipline. Today, I might well want to argue that Pakistan is not part of the Middle East, but I can’t pretend that the Middle East isn’t extraordinarily important in Pakistan and vice versa. So, I think I still have a place in that section, even if the bulk of my energies go into the Society for Anthropological Sciences (SAS).

I got involved in SAS first as the section news contributing editor and then as a member of the executive board. I initially got involved because of personal contacts who were already members and who encouraged to become more active. I have no doubt that my voluntary work on the executive board has helped more people to know my name, and hopefully to read my work (because ultimately, I think that’s what we are all trying to get people to do). I have developed a number of significant grant applications with people I met through SAS meetings. I have co-authored some of my best papers with my fellow SAS members. As a vehicle for stimulating promising research ideas, I can honestly say that SAS has been invaluable.

SAS members don’t all agree on the boundaries of science, nor do we agree on the most appropriate methods for specific research questions. At one of my first SAS spring meetings, someone introduced me to another person by saying, “This is Steve, he’s one of the kinship people.” I asked him which “people” he was with and he said he’s in the cognitive crowd. Over the years, SAS has benefited from people who might identify, on occasion, as linguists, historians, archaeologists, biologists, psychologists, medics, and many more. What we all share is a commitment to producing rigorous, empirically grounded research. Some of us consider ourselves applied anthropologists, some adamantly do not. Our politics can be diverse, but we all share a respect for the pursuit of credible evidence-based knowledge. We call ourselves the Society for Anthropological Sciences to reflect both a respect for rigor and empiricism and to acknowledge that science isn’t one and only one thing. Broadly speaking, we come from or have been inspired by the mythical four-field anthropology. We believe that dividing ourselves into sub-disciplines who don’t challenge one another through regular interaction and sharing of intellectual ideas and research results, diminishes not only the whole of anthropology but the constituent bits that make it up.

In order to ensure that we are able to carry out the research that we know will make a difference, either to our disciplines or beyond academia, we need to ensure that we provide the right opportunities for the development of healthy and productive intellectual exchange for all anthropologists. As the incoming president of SAS, it is a privilege and an honor to take up the torch for my short tenure and try and help excellent scholars and scientists who make up our section, to create the spaces that transform ordinary scholarly meetings into exciting chances to learn from and challenge one another. I am very much looking forward to meeting as many SAS members as possible at our meetings. Equally, I hope non-members will join our panels and our business meetings to learn how they might benefit from greater involvement. 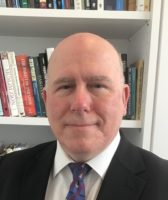 Stephen M. Lyon is the incoming president of the Society for Anthropological Sciences (2019–2021). He is professor of anthropology at Aga Khan University’s Institute for the Study of Muslim Civilisations in London.