Writing Nigeria, Past and Present

One anthropologist’s journey through his bookshelf leads him to a new project in literary anthropology.

What follows is about a writing project. It began some years ago, in the attic of my summer house, as I was looking at shelves where my books, pamphlets, and old magazines about Nigeria had accumulated over the years—in large part fiction, but some social commentary and other non-fiction as well. (The academic literature was elsewhere.) I wondered what I could do with it all, and thought it was a collection which probably would not make much sense to many people. And then it struck me that here were the materials for a book, an adventure in that branch of our discipline which has been emerging as a literary anthropology.

This writing project has been a fairly recent one, but the experiences that have gone into it date back to my first visit to Nigeria as a young teenager in the late 1950s. Then, as much of Africa moved out of the colonial period into independence in the early 1960s, I was one of many people elsewhere in the world fascinated by this historical transition. I made a couple more brief journeys to Nigeria in that period—it was this interest that brought me to anthropology. I may have expected to stay just for the introductory course, but it seemed the only discipline in the university that could offer me tools for understanding African cultures.

So I remained, now for some sixty years. I certainly planned that my first real field study should take me back to Nigeria, a country which began as a haphazard construction by British colonialism, with a name invented by the wife of the first governor, and has repeatedly struggled with centrifugal forces. By the time I was getting ready for the field, however, the southeastern part of the country had tried to secede, and the Biafra War resulted, drawing world-wide attention. This was not time for field work there, and I found myself instead in an inner-city Black neighborhood in Washington, DC.

By the 1970s, it was time for me to return to Nigeria. I made my way to Kafanchan, a town that had grown up in the colonial period around a new railway junction, in the middle of the country, and I returned for several stays in the 1970s and 1980s. It was a comfortable field site: I could walk around most of it in a couple of hours. Under the influence of my Washington experience, I intended this as a study in urban anthropology, focusing on the relationship between ethnic diversity and the division of labor. I did that, but the field experience can also take us in new directions. I found that the imagined horizons of many townspeople were far beyond their everyday habitat, and that in towns like Kafanchan a new culture was growing, through the encounter between local traditions and global influences. In between my Kafanchan stays, at home in my Stockholm library, I found Johannes Fabian’s description of Congolese popular culture as an instance of creolization, and a much older article by Alfred Kroeber on the Oikoumene of the ancient Greeks. “Creolization” and (in an updated version) “the global ecumene” thus became key concepts, as my Kafanchan experience confronted emerging understandings of globalization.

Many people are walking around in an outdoor market. The market is lined with open front wood and metal structures and in the middle there are baskets and vegetables laid out on large squares of fabric.
Credit: Ulf Hannerz 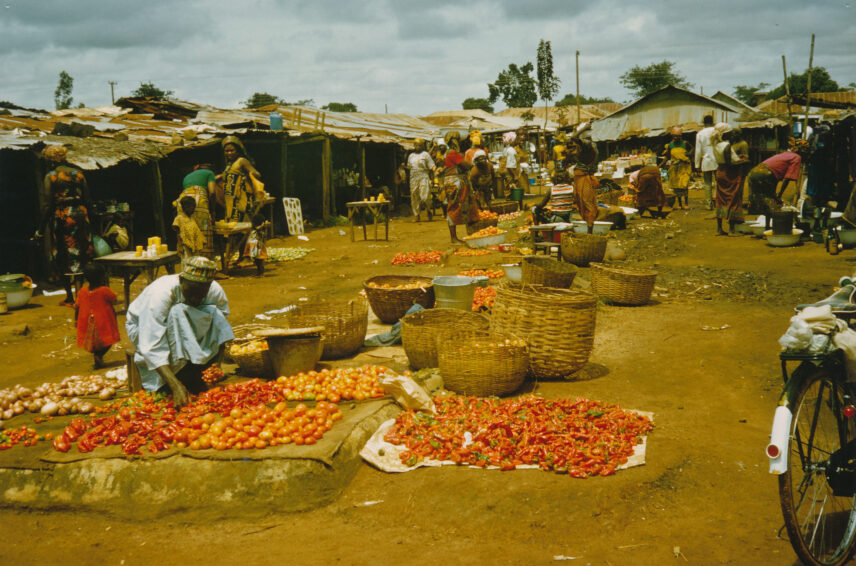 By the 1980s, Nigeria was experiencing more difficult times. Until the late 1990s, there was a series of military regimes, each worse than the other, resulting in sheer gangsterism. As a lone foreign ethnographer, I felt I would just be too vulnerable if I were to return to Kafanchan. And so my research engagement with Nigeria moved to a back burner while I went on to other things.

Nonetheless, my interest in the country was undiminished. In particular, I kept reading its new fiction. Nigerian politics and economy continued to vacillate, but the country’s literary production has been remarkably successful. You can go to a good bookstore just about anywhere in the world and, on the shelf for international fiction, find several great Nigerian writers. Early in the alphabetical order, you may find “Achebe, Chinua”; and soon thereafter, “Adichie, Chimamanda Ngozi.” Indeed, the first writer in Black Africa to win a Nobel Prize in literature was also Nigerian, Wole Soyinka.

So again, there I was in the attic of my summer house. At hand was Achebe’s Things Fall Apart, from the late 1950s, a book about the end of precolonial society among the Igbo, one of the largest Nigerian ethnic groups, still perhaps The Great African Novel. Among Adichie’s recent books, there would be a novel about the Biafra War, and Americanah, her story of the contemporary life of a transnational migrant woman. A half-century or so passed between these, but in that period a great many other writers, not equally well-known, also got to my shelves. One of the 1960s writers, Onuora Nzekwu, had in fact played a part in taking me to Kafanchan. His Blade among the Boys begins with a sort of mini-ethnography of the town, where he himself had grown up. This was what had made me decide to go there on my reconnaissance for a suitable field site.

I saw my experiment in literary anthropology as an attempt to use these writings in portraying the diversity of Nigerian life and thought. It would also show, however, the connections of this part of Africa to the larger world. Early in our present century a new term had shown up, in literary and cultural debate, to express the transnational openness of contemporary African life and thought: Afropolitans. There has been some debate, perhaps mostly among literary scholars, surrounding the concept. My own feeling is that Nigeria was already Afropolitan before it became Nigeria. The transatlantic slave trade had been one part of this. In Kafanchan, I learned that a significant social type in the late colonial, early postcolonial Nigerian English vocabulary was the “been-to”—someone who had been to somewhere abroad (mostly Britain, center of the Empire) and returned with a capital of knowledge convertible into power and affluence. The twenty-first century Afropolitans, such as the characters in Adichie’s Americanah, had been-tos as their conceptual ancestors.

Getting into my own writing, I would draw on not only Nigerian fiction but also other writers dealing with the country in one way or other. Some had been there as foreign news correspondents, such as the famous Polish journalist, Ryszard Kapuscinski, or John Darnton of the New York Times, expelled by a military regime when his reporting became inconvenient. I went back, too, to the more or less autobiographical writings by the last generation of British colonial officers. I could link their writings to a couple of interviews I had done in London in the 1970s, with men who had been district officers in Kafanchan some twenty years earlier. They enjoyed the interviews and became a bit nostalgic. One organized the local celebration of the coronation of Queen Elizabeth in Kafanchan in 1953.

With a few of the Nigerian writers I also had my own brief encounters. I could only follow the award of the Nobel Prize to Wole Soyinka through the Swedish media. A few years later, however, when he came back to honor his friend Toni Morrison as she won the prize, I enjoyed a brief conversation with him at the Nobel Prize dinner, in the Stockholm City Hall. He was probably surprised when this Swedish native started reminiscing about a remote Nigerian railway junction.

My zigzagging writing project related the writing of fiction to anthropological writing. I could place Achebe’s Things Fall Apart next to a brief textbook on Igbo culture and society by Victor Uchendu, himself Igbo and more or less an age mate of Achebe, who went to the United States for higher education, did field research among the Navajo for his doctorate and became an anthropology professor at the University of Illinois. When a famous Brazilian novelist wrote a book about an ex-slave family returning across the ocean to a new life in old homelands along the West African coast, I could compare that story to Lorand Matory´s historical anthropology of Afro-Brazilians, and the continued linkages across the Black South Atlantic. Then I could devote a chapter to the life history of Baba of Karo, a Northern Nigerian woman born in the late nineteenth century, who witnessed the arrival of the British colonialists, and lived through three marriages. In a way, the author Mary Smith served as Baba’s ghost writer. The resulting book was in part the outcome of the gendered division of academic labor, as was common for much of the twentieth century. Mary Smith was the spouse of M.G. Smith, whose successful but more conventional monographs about Northern Nigerian emirates brought him professorships at University College London and Yale University. His wife, not in an academic career but with him in the field, could afford to do a more original kind of writing.

So here I am now. The manuscript of Afropolitan Horizons: Essays Toward a Nigerian Literary Anthropology is with a publisher. The adventure that began in my summer house attic will be complete when I sit down with my laptop to do the index. And then there are afterthoughts. Is this not the situation for many of us senior anthropologists: memories of fields which refuse to be forgotten, old notes, book shelves continuing to fill up? Are there not more projects in retrospective literary anthropology waiting to get going? Moreover, could it be that the eventual products might appeal to a wider readership than our regular academic writing, thus turning literary anthropology into public anthropology?

Ulf Hannerz is professor emeritus of social anthropology, Stockholm University, and a member of the Royal Swedish Academy of Sciences and the American Academy of Arts and Sciences. Among his books are Soulside (1969), Exploring the City (1980), Transnational Connections (1996), Foreign News (2004), and World Watching (2019).