Is there salad on the Moon? Down on Earth, Yugoslav peasants argued the question.

On Christmas Eve 1968, Apollo 8 became the first manned spacecraft to venture around the dark side of the moon. To audiences across the world, the visions of Earth rising above the lunar deserts triggered an understanding that humanity might be alone in the universe, its habitat precariously unique. Curious about the resonances of such an anthropological drama in his neighbourhood, the Yugoslav director Jovan Šćekić went to the central Serbian village of Mrčajevci to make a TV documentary, Where Is God after Apollo 8? (1969). The program, shot two weeks after the NASA mission, featured villagers’ commentaries on the space race, religion, and science. But the discussion of cosmic authorities quickly turned to earthly matters, such as the peasant question in industrial socialism and the place of politics in a heliocentric world. 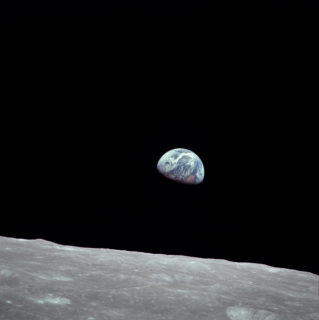 “I had hoped they would discover something, like God, there,” one older villager said. “But as they have not, but found some bumps and landslides instead, that provoked me even more. Because we work a lot as it is; if it turns out they will find some others that we need to support, I would have begged them not to search for anyone [in] the first place.” Comparing the moon to another pasivni kraj, an underdeveloped area, his words alluded to the Yugoslav politics of redistribution to poorer regions, a practice Serbian peasantry resented as extractivism. But this was not simply a nationalist lament. Rather, the villagers questioned the supposedly disinterested nature of scientific authority—American, Yugoslav, Russian, whoever’s. Recalling an agronomist’s advice that failed him, and the seemingly unfair pricing of agricultural goods, one villager described his faith as a disappointment with technocracy: “Only God [is left]—in these, I don’t believe!” Another one punned: “Our produce is falling, all else is skyrocketing.” Cosmic exploration was read as the latest fad of progressive politics, opening a question of who exactly profited from allegedly all-human breakthroughs.

“Progress” is never universal or evenly spread, but broken down through emic cosmologies of fortune and the concrete fields of power that distribute it. The villagers’ responses can be understood at this particular junction. They mocked the moon’s arid surfaces to underline their dependence on land as a total generative horizon. Its substance would resist attempts to control, most of the interviewees professing a belief in “nature” while viewing belief in God as superstition. Villagers also spoke back from their devalued position in the Yugoslav state, as a so-called reactionary class to be decimated by urban proletarianization. And they contested the wider separation of science and politics, a modernist reason that, as one of the interviewees said for the space race, “still divides the world in halves.”

And yet, the peasants did not give up the idea of progress altogether, their orientation to the future dismantled in an off-modern fancy. Rather, they tried to argue within the official ideology of progress, asking for a wider distribution of its nets. Such was the contention of the documentary’s sequel, which, feeling ashamed of the original program, the municipality leaders asked for. Criticizing a local priest who spoke of the Apollo 8 Christmas dinner in space as a proof of progress being on the believer’s side, the municipality cadre reasserted their commitment to socialist development instead. But other villagers remained markedly in between. They voiced such hybrid stances as “It does not matter where God is, but to work, create, and go ahead” and “If I was a God in this agriculture, I would synchronize everything, lower the prices, buy all the goods.” Both God’s grace and socialist planning were to come down to a terrestrial level, an earthly progress fitted to those whose lives depended on the land.

In Down to Earth (2018), Bruno Latour argues that we are witnessing the final shattering of the Galilean view of Earth as just one among the celestial bodies. In a world with no more frontiers, the very meaning of soil changes, from an empty space to explore to a liveable territory to defend. From the Brexit referendum to the flat Earth movement to eco-nationalisms, what passes as populist mobilization is this revaluation of the planet’s uneven riches as a total substantive base. But this transition from human to the earthbound arguably started with the cosmic race and its uneasy resistances—including those in the hearts and minds of the NASA crew themselves. William Anders, the Apollo 8 member who took the iconic Earthrise photo, recalls how “It didn’t take long for the moon to become boring. It was like dirty beach sand. …Then we suddenly saw this object called Earth. It was the only colour in the universe” (Sample 2018; compare Crook 2018). The experience made him an atheist, Earth lover, and an opponent of Mars colonization. Anders is probably the first astronaut turned a Gaia fan, who—like Yugoslav peasants in 1969—preferred a known habitat to a rocky space desert. For both parties, the science that seemed to be escaping Earth was to be re-grounded, landed on fertile soil with gravity, its fruits redistributed to the poor seeking transformation.

There are earthly subalterns behind cosmic wealth. So said the poem written by one of the villagers, Obren Pjevović, sung in the film by Mašinka Lukić. Whereas the rest of the movie was an all-men act, the poem’s astro-folk lyrics mused on inequality from the perspective of a girl who plucks the weeds and sleeps in a wooden bed while her lover indulges in a spaceship and roams the planets. Again, this was not an exercise of “postprogress” (Tsing 2017). Rather, the subaltern in the poem asked for her share of the (space) cake:

Tell me Mile, my cosmic brother
Is there any salad on the moon?
Some salad or old prosciutto
Or is it just bare deserts there?
Dried plums and arid planets
While on Earth, a child weeps
It seeks bread and salad
A hungry child, brother.

To come down to Earth means to experience it in scales of significance, rather than as an empty technocapitalist space. Earthbound subjects belong and critique in gradients of affiliation, rather than across universally open or nationally exclusive vectors. Commenting on the Apollo 8 mission from their neck of the woods, Serbian lunosceptic peasants foregrounded Yugoslav progressivism, while discussing the broader aspects of humanity’s planetary predicament. And when asked if he was a nationalist, the poet Pjevović would often describe graduality of space and belonging: “I love Morava River I grew up on more than Morača I never saw. I love Mrčajevci more than Čačak, Čačak more than Belgrade, Belgrade more than Zagreb, Zagreb still more than Vienna. If this is nationalism, than I am a nationalist.” One could finish this sequence with “I love the earth more than the moon,” because the moon has no salad for hungry children to eat. But if, as another villager added, the moon people are interested in our produce, we would gladly trade it with them.