Forest Fires in the Capitalocene 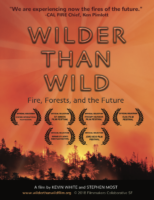 Wilder than Wild: Fire, Forests and the Future

by Stephen Most & Kevin White
Published 2018

Wilder than Wild: Fire, Forests and the Future is a more than timely documentary. As global warming continues, wildfires are increasing in frequency and scope. Fire seasons in all continents are not only getting longer, but the wildfires are also characterized by being larger and of higher intensity. They are turning into wilder than wild, or into so called mega fires – the predicted fires of the future. While the filmmakers don’t refer to the term Anthropocene, it is clear that a vicious circle has been created with climate change producing the conditions for devastating fires, which threaten societies and ecosystems, while the greenhouse gases released from these fires contribute to an increase in global warming and drought. Recent examples abound. The 2019-2020 wildfires in Australia are the most widespread in the country’s recorded history with huge human, ecological and material losses. Wilder than Wild is thus not only a welcome contribution to the debate on environmental politics, but a necessary and urgent one.

The film has a global scope although it zooms in on wildfires in California. Here, forest fires have shaped the landscape since ancient times, and pyrophilic species normally thrive after each fire season. Today’s mega fires are devastating however, making recovery hardly possible. In addition, while past wildfires used to affect mainly rural areas, today urbanisation and demographic growth in California have made urban areas equally vulnerable. Three cases of mega fires are at the forefront in the film, namely the Rim Fire in Sierra Nevada in 2013, and the Wine Country and Thomas wildfires in 2017. Told through the personal lens of one of the filmmakers, who has visited the region since he was a child, and testimonies of local residents, the history of these places and the social effects of these particular disasters are revealed. Their stories convey that disaster events are both material processes of destruction and cultural processes of communitas that loom large in affected communities.

But this is not a disaster commemorative film only – possible solutions to manage future fires are also presented. Members of Yurok communities in North-western California who are interviewed in the film tell that they used to practice regular prescribed burning of this forest land as a means to keep the ground clean and their forest world in balance, thereby reducing the amount of ground vegetation and flammable debris that constitute fuel for fires, preventing fires from becoming disastrous once they occurred. This changed in the nineteenth century when the US Forest Service and National Parks like the Yosemite were created, aiming at protecting trees as renewable resources or as wilderness. Regular forest fires were then framed as a threat and fire prevention and suppression turned into the principal government policy, embodied by the advertising icon Smokey the Bear. This policy is starting to change today. In the film, forest and fire management experts are interviewed, supporting prescribed burning rather than fire suppression, arguing that even though this contributes to global warming and health hazards through smoke, the losses produced by mega fires are a far worse scenario.

It is not difficult to feel distressed by this gloomy global scenario. The filmmakers thus make an effort to conclude their message by presenting a number of public initiatives in California that offer local solutions. Private-public stakeholder collaboration is organised in the Stanislaus National Forest. So called cultural burning as practiced historically by Yurok people are now organised in collaboration with surrounding communities and public agencies. New forest is planted by civil society organisations in areas burnt in the Rim Fire. This are all laudable initiatives and encouraging scenes, in line with the film maker’s voice-over making his final remarks:

In this time of change, we need to work together. Just as landscapes have to become more resilient, so do we.

This is all well and good, and in this regard, this is a well-made documentary that addresses a pressing contemporary problem, yet the film lacks a critical perspective. Capitalism, the forest industry and all the political and economic interests in California and beyond that has produced climate change and the socio-ecological vulnerabilities that enable mega fires are completely omitted from the story. After yet another failed UN climate summit in December 2019, decision makers need critical messages that urge them to act now. Unfortunately, Wilder than Wild falls short in this regard.

Susann Baez Ullberg is Assistant Professor of Anthropology at Uppsala University. Her research interests include environmental and disaster anthropology. She has undertaken fieldwork in Argentina, Peru, Spain and Sweden. Among her publications are work on flooding and social memory, water infrastructures and expertise, and the use of moral arguments in the wake of wildfire. Next, she is turning her ethnographic gaze on aquifers and on bark beetles.