The movement of and controversy around items as common as baby formula powder tell a story about the changing political relationship between Hong Kong and mainland China.

In Hong Kong’s New Territories, directly attached to the Sha Tin MTR subway station, there is an enormous indoor complex of continuous shopping malls. Products available to buy range from groceries and personal care products to luxury jewelry, watches, and clothing. In 2019, it was a commonplace experience for me to find clusters of people in front of the Mannings drugstore packing products into large suitcases, to the point that the entrance to the store was completely blocked. While these suitcases sometimes contained luxury products or tins of butter cookies, by far the most common sight were cans of baby formula powder, known colloquially as “baby milk.” The baby milk was not being bought by new parents; rather, it was being purchased by shoppers from mainland China to transport over the border and resell for profit. For many years, the movements of baby milk have signified changing relationships of trust between Hong Kong and China.

From 2017 to 2019, I studied changing configurations of medical ethics, public health, and regulatory governance in Hong Kong. Though my initial focus was on the workings of large institutions such as the Hong Kong Hospital Authority, I soon discovered that baby milk, a simple everyday product, was a substance that inhabited the interface of complex regulatory intersections—including food, medicine, commerce, and border control—at a time of immense change. Following mass protests, government crackdowns, and two years of a pandemic, a city that once prided itself on freedoms of speech and the press is now the subject of international criticism for its turn to authoritarianism. The commercial landscape has also shifted, with widespread concerns about erosions in economic freedom. In parallel, my reflections on this time shifted from ordinary research to an act of “witnessing” the radical politico-economic and social transformation of a city that I had known (see Wang 2021).

A crowded hallway filled with people and their suitcases outside of Mannings drugstore.
Credit: Sara Bergstresser 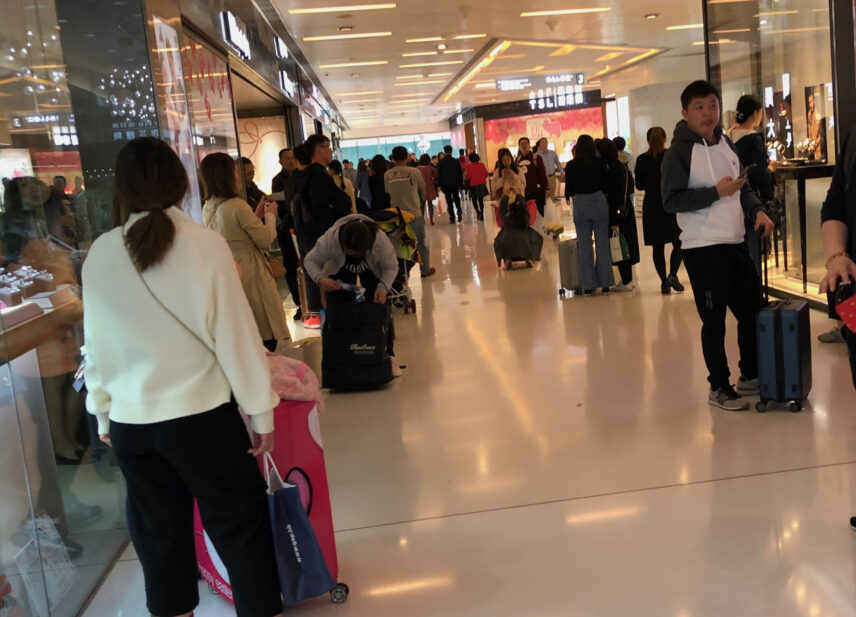 In March 2008, consumers in mainland China began to complain that their children were sickened by Chinese brand Sanlu’s baby milk powder. Action was not taken by the government until months later, when international complaints prompted widespread scrutiny, leading to global recalls. These events became known as the “Chinese milk scandal.” Melamine is an industrial chemical that in large doses is toxic to kidneys, and at least six babies died from ingesting the contaminated infant milk powder, while at least 290,000 others became ill. It soon became clear that the melamine had been purposefully added to watered-down milk to make it falsely appear to have a high protein content. Chinese consumers became extremely distrustful of both the milk industry and China’s food regulatory systems. These scandals highlighted contradictions between China’s rapid economic development and its continuing political messages of Communist solidarity.

Hong Kong played a unique role in the crisis. During the 2003 SARS epidemic, the city had established extensive public health infrastructure, resuming the role of “public health defender” (see Keck 2009). Mistrust drove people from the mainland to Hong Kong to buy baby milk powder of imported European brands, which were not available in the mainland. Baby milk emerged as a cross-border commodity for the rising Chinese consumers to mitigate against their mistrust surrounding the government’s regulatory failure in the market in mainland China.

As more people travelled to purchase more baby milk up until the 2010s, baby milk came to mark the tension surrounding the increasing permeability of the border between Hong Kong and mainland China. There were formula shortages in Hong Kong, which contributed to a growing sense that Hong Kong was being turned into a “city-sized outlet mall” for shoppers from mainland China. Some regarded this as a threat to Hong Kong’s autonomy as an independent political, judicial, and regulatory entity under the “One Country Two Systems” principle.

Two banners in orange and pink at the Kowloon side of the Bay, reading “Hong Kong Asia’s World City.”
Credit: Sara Bergstresser 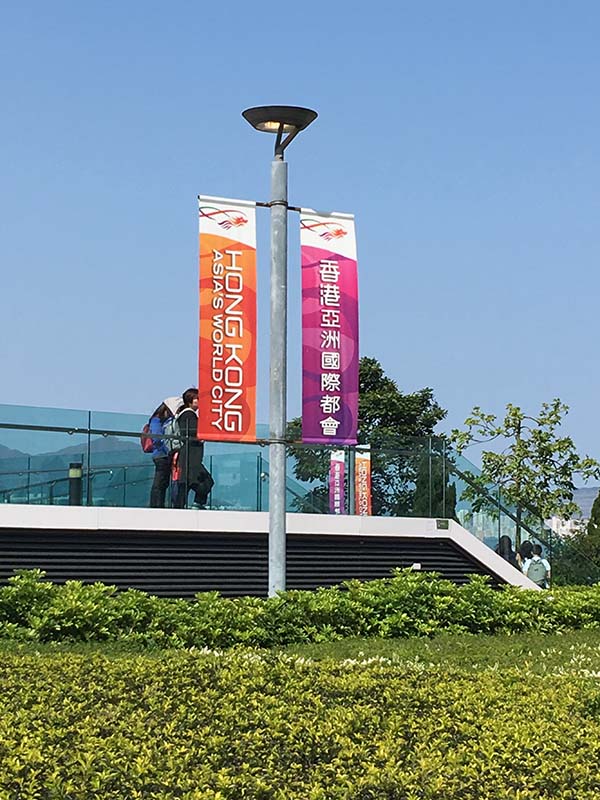 In 2018, Hong Kong advertised itself with the slogan “Hong Kong, Asia’s World City.”

In Hong Kong, under these circumstances, baby milk powder tins became iconic components of artworks, often highlighting the fearful dissolution of the border between Hong Kong and the mainland. In 2013, artist Ai Weiwei released a gallery-wide map of China made out of tins of baby milk powder in an exhibit in Hong Kong. He described the piece as relevant to many problems, including the Chinese milk scandal, the failure of the Chinese food safety regulatory system, the subsequent bans of the mass internal importation of foreign formula, and the increasing tensions between Hong Kong and the mainland—which have only escalated since then. He stated, “Hong Kong people make profits from these problems, and are also victims,” pointing out both the embeddedness of the problem in systems of commerce as well as cross-border mistrust and tensions. The mistrust stemming from the 2008 milk scandal did not abate in the subsequent years; to the contrary, it only compounded focus on newer resentments.

Since mid-2019, there have been dramatic changes in Hong Kong, including multiple periods of unrest, the arrival of COVID-19, selective border closures, vaccines, the enhancement of National Security Law, and major changes in Hong Kong-mainland relations. The Hong Kong administration’s attempt to allow legal extradition to mainland China sparked a series of public protests, involving millions of protesters and aggressive police intervention in the coming months. In this landscape, the situation surrounding the border has been substantially reconfigured once again; the current Hong Kong administration declared to politically prioritize reopening the border to the mainland while scaling down trade with the rest of the world.

The iconic images of baby milk appeared again. At a protest outside of the West Kowloon Rail Station, planned specifically for gaining support from mainland shoppers, artist Badiucao released a poster of a giant baby milk tin that read, “Formula Baby Safe.” According to Badiucao’s comment on his Instagram page, this meant: “The best message for mainlanders is ‘If Hong Kong’s gone, so is your baby formula.’” In another image, Hong Kong Chief Executive Carrie Lam, who once stated herself as Hong Kong’s “Mother,” appears with guns emerging from her breasts where nipples should be. In a final illustration, titled, “Instruction: Nursing a baby in Hong Kong,” the mother is instructed to be wearing gas masks while nursing to protect the baby against tear gas, which was widely used to suppress protests. Badiucao’s focus on the dual imagery of baby milk—first, as a salient symbol of cross-border commerce, and second, as a substance associated with food, health, babies, and motherhood—shows the ways in which the protests over Hong Kong’s independence were also interwoven with everyday family life and its emotional complexities. 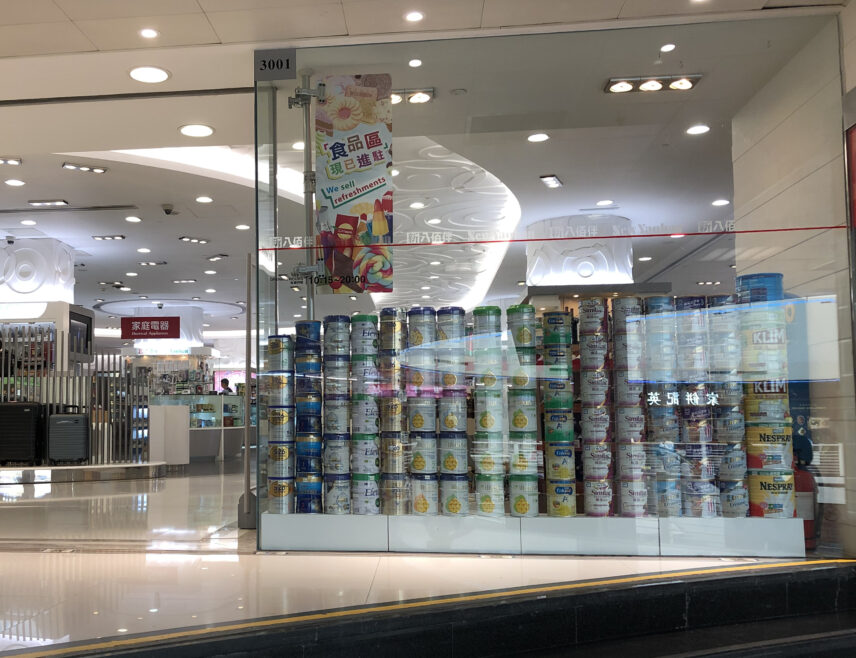 Baby milk formula displayed in Macau to entice mainland shoppers. Ferries from this location travel to destinations including multiple locations in mainland China.

Regulatory failures in areas of food and medicine continue to occur in the mainland; new scandals continue to disrupt systems, putting the health of populations at risk. For example, cross-border births are another focus of tensions over perceived encroachment. Like baby milk, places of birth are bound with symbols motherhood and hope for the next generation. In 2012, a national controversy erupted in China when professionals in Hong Kong “took out a newspaper ad depicting incoming mainland Chinese as locusts and asking, ‘Are you willing to pay 1 million HK dollars every 18 minutes to take care of mainland children born in Hong Kong?’” After the 2014 “Umbrella Movement” protests, concerns about increasing border permeability were not assuaged; instead, the mainland engaged in clear messaging that it was taking more interest in Hong Kong’s political affairs. Other regulatory shortfalls, vaccine scandals, and shortages linked to medical tourism have further stoked existing resentments. In addition, Hong Kong has become a node of global distribution for counterfeit drugs and illegally imported medicines. Across different manifestations, baby milk imagery continued to be invoked to indicate growing discomfort with the Hong Kong-mainland China relationship.

As it struggles with new outbreaks and pressure from mainland China to adhere to the “Zero-Covid” strategy, the international character of Hong Kong continues to shift. The once permeable border between Hong Kong and the foreign world has intensified through the implementation of strict travel restrictions and long quarantines, and the internal border with the mainland has become the primary focus for reestablishing traffic. The Hong Kong Free Press, one of the few remaining independent news outlets in Hong Kong, recently published a picture of a workman squatting on the ground to roll up the “Hong Kong Asia’s World City” banner while looking back at three masked policemen walking by. Instagram user otaku_5354 commented: “in 20 years’ time whenever anyone wants a photo to summarize the fall of Hong Kong, they will refer to this!” Border flows and political relationships between Hong Kong and the mainland have been reconfigured in the past few years, are these shifts are both negotiated and presaged by controversies over materials as ordinary as baby milk.

Sara M. Bergstresser is currently lecturer in the Masters of Bioethics program at Columbia University. She works at the intersection of medical anthropology, health policy, and bioethics. From 2017 to 2019, Sara was lecturer and program coordinator for Bioethics Education in the Faculty of Medicine at the Chinese University of Hong Kong.