Considering an Anthropology of the Far Right

Chandra L. Middleton interviewed anthropologist Nitzan Shoshan, professor in the Center for Sociological Studies at the Colegio de México, about his award-winning book, The Management of Hate. Below is our interview, edited for space and clarity.

Chandra Middleton: How did you become interested in the topic that resulted in The Management of Hate?

Nitzan Shoshan: The path was not self-evident or predetermined. My initial interests were in post-socialism, which was a major topic of study when I entered the PhD program in the early 2000s. I wanted to study in Germany because I thought it an exceptional case that could illuminate various dimensions that had not been explored in the nation-states that emerged from the Soviet bloc. One of the most fascinating, if you might call it that, processes I encountered was the very quick rise of right-wing nationalist, racist, xenophobic, and violent groups and movements that terrorized various people on the streets of East Germany immediately after reunification. That seemed like a topic that begged for anthropological research, a belief that was reinforced as I prepared my project and came to realize that there hadn’t really been any anthropological, or even ethnographic, study of such groups. 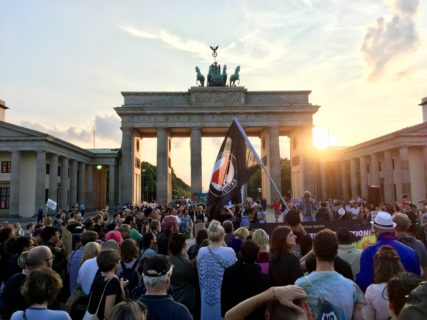 Berlin stands with Charlottesville, Virginia, after a Unite the Right Rally turned deadly in 2017. Michael Mayer from Berlin, Germany/Wikimedia (CC BY 2.0)

NS: I oscillate between on the one hand the desire for anthropology to develop certain methodological strategies and certain norms of writing about such topics, and on the other hand the understanding that has been instilled in many (if not all) of us already as grad students that ethnography requires a great deal of improvisation, of testing and failing, which is difficult to approach with a prefabricated toolkit or strategy. In pragmatic terms, some of the difficulties I faced and some of my responses to them might prove completely useless for other anthropologists facing different complicated situations. For example, my identity in the field and problems of sincerity with my interlocutors have become central issues for me to reflect upon. That might not be the case for someone who does not have to hide their identity. On the other hand, anyone who isn’t white or male would have faced other, perhaps even more complicated difficulties if they wanted to carry out similar research. I don’t think it would be impossible, but there would be other obstacles to confront. So, I oscillate between trying—and being called upon—to say something about this and feeling like I’m saying too much.

CM: Can you tell us about your writing process?

NS: Painful, as it often is for anthropologists. There was a constant sense of coming against limits in what I could do, or in what I should do, in representing the people and phenomena I study. It took me a while to realize I might not resolve these problems. They might remain as tensions that make people angry, and they do make people angry, even for reasons I could not foresee or for opposite reasons than I had foreseen. I think we all face the tensions inherent to the politics of representation in which we participate as we write. Like many of us, too, tying together very focused ethnographic research with much broader scales was challenging. I also struggled with how to make my research relevant to conversations beyond Germany and the far right, to questions that are more theoretical in nature. I had to really take apart my dissertation and restructure it for the book, reconsidering how I wanted it to look and what I wanted it to do. It was quite an extended process that demanded a great deal of additional research and was interrupted by many other commitments. Subsequently, the manuscript required at least two word-by-word revisions to make it reader-friendly. Some readers have commented that it could be more legible …but just imagine how it was before these two revisions!

CM: Does your work speak to or intersect with reconciliation efforts happening in other countries? How might insights gained from your work inform other experiences?

NS: In Germany there have been at least two relevant horizons for reconciliation. There’s a whole transitional justice process that emerged out of reunification. It’s mostly concluded yet quite recent and fresh in people’s memories, especially, of course, those for whom it was personally significant, which is not the whole of Germany. From conversations with colleagues who work, for example, on neofascism in Italy, Spain, and Poland, or on processes of reconciliation in the Balkans, research on both cases of reconciliation in Germany does have a lot of potential for dialogue with other contexts. They speak quite well to each other, despite their very different resolutions, which answer distinct political forces that have been at play. This shows how significant the present political configuration is for reconciliation, transitional justice, and memory. I’ve participated in dialogues here in Latin America with researchers who work on the politics of memory and transitional justice in post-military dictatorship countries. With one of my students, for example, I worked on how Mexico’s “dirty war” of the 1970s is remembered and how the families of the victims and the disappeared from that period still fight for justice. I expect this issue to become even more important in Mexico as past atrocities, some dating to almost 50 years ago, increasingly come under the tools and techniques of truth commissions and forensic anthropology, a process that’s been gathering pace.

CM: Do you have any final thoughts we didn’t get to cover earlier?

NS: Oh, there were a lot of things that occurred to me as we spoke! In relation to the challenges of doing research like mine, I think anthropologists had abandoned writing about nationalists, neo-Nazis, and white supremacists [in the United States] and hadn’t paid attention to studies in this field, but there’s much more of this work now, which I think is great. But this implies a tension the discipline needs to reflect on. On the one hand is the call for de-colonizing the discipline, which I find important and which in anthropology has entailed thinking about and modifying our relationship with our interlocutors in the field and rendering that relationship increasingly collaborative, increasingly horizontal. I find that a very compelling ethical position. Nevertheless, it’s either difficult or impossible to implement with certain research agendas, such as these. For me, our ethical commitments as anthropologists are multiple and complex and they include not abandoning these fields of study. They include intervening in debates about topics such as the far right or white supremacism using our tools, which is the ethnographic proximity we bring to the debate. Yet, for this to happen, there are certain compromises one has to make. This has been an interesting issue to discuss, often with graduate students who wonder why my work was not more collaborative. For some of us working in this field, it’s quite clear that this won’t work; people studying topics similar to mine often reply, “Well, I can’t write texts [with my interlocutors] because they’re neo-Nazis.” It would be worthwhile to think if such a position necessarily reproduces colonial logics, or if there are other ways to do decolonial work [in these fields]. And what other ethical commitments we need to attend to that might sometimes take priority? So that’s been a fascinating discussion.

CM: Thank you for taking the time to talk about your research and writing.

NS: Thank you for the questions.

Chandra L. Middleton is a PhD Candidate in the University of California, Irvine’s Department of Anthropology. Her dissertation research examines how federal civil servants make sense of citizens’ voices, as articulated in written comments, in the course of environmental policymaking.

Nitzan Shoshan is a professor in the Center for Sociological Studies at the Colegio de México in Mexico City. His work has focused on nationalism and the far right in Germany and Europe as well as on urban marginality in Mexico City.