In 2018, two new poster series colorfully bursting with depictions of urbanites in extremis appeared on Shanghai’s subways. They advertise competing mobile phone apps that allow users to check out suppliers, buyers, investment companies, and potential employers to suss out the likelihood of being cheated by them.

The ads point to two particularities of the Chinese late socialist economy: a high rate of entrepreneurship, and reluctance to turn to the judicial system when something goes wrong in business or at work. I heard stories reflecting both realities from my interlocutors at Jiangnan Design, a small design and construction business outside Shanghai. These narratives often ended with an exasperated but resigned claim of moral decline. Put simply one day by Meng, one of the company directors: “China doesn’t have good people anymore.”

Narratives of moral decline often say less about actual ethical practices than they do about what people fear and value. Here, I visually examine the subway ads through my interlocutors’ experience of entrepreneurship. From this perspective, the ads interpolate Shanghai middle-class commuters as business participants who must protect and advocate for themselves, using mobile technology rather than judicial recourse, amid a pervasive sense of moral loss. 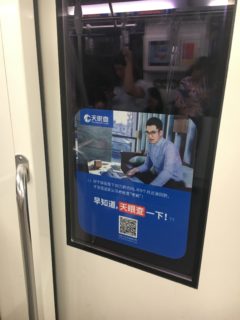 The middle-class subject under threat

The first ad series, for the app Tianyancha, visually poses nightmare scenarios that might befall the young, white-collar, and technologically savvy. The app name means something akin to “check from the eye in the sky,” suggesting that only from an all-knowing stance outside the self can a business’s reliability be known. The subjects of these ads did not just miss warning signs—they are victims.

In one ad, a young man in business attire views his laptop screen with a pained expression. In his leather- and marble-textured office, the man is clearly a white-collar worker (bailing), likely an entrepreneur:

And then in large text:

If only I’d known, I could have checked with Tianyancha!

Adhered to the window on the metro door, the ad reflects white-collar commuters figuratively in its depiction of professionalism and vulnerability, and it also reflects them literally, their faces hovering in the glass near the young man’s image.

And now it was over—and not with an outcome my interlocutors wanted to discuss. Director Meng brushed off my questions, saying only that judges were “the worst people in China,” attributing what he sees as a judicial failure, to ethical failure. Meng would prefer to avoid such judicial involvements in the first place.

Such prevention is the promise of the subway ads. 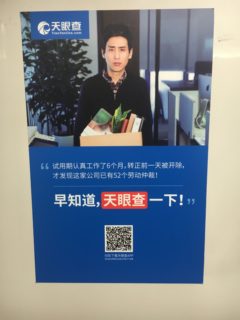 Here a young man carries a visual symbol of job loss, a cardboard box of personal belongings from his office: books, a plant, and a desk calendar.

I worked hard for the six months of my trial period. The day before I was to become a regular employee, I was fired. It was only then that I learned the company had already had 52 labor arbitrations!

And then, again, the large text:

If only I’d known, I could have checked with Tianyancha!

The young man’s wronged gaze stares out at commuters from the trappings of white-collar work and life: cubicles, copiers, and an Apple computer. For those viewers for whom his surroundings appear familiar, this very ordinariness invites them to contemplate their own employment insecurity. 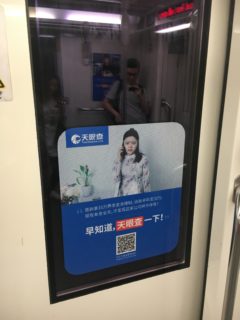 Another ad depicts a young woman in a more domestic space. Yet, the family is no safer from unscrupulous business actors than the individual:

Mom and Dad invested 100,000 RMB from their social security. Apparently it was supposed to become 200,000 in half a year. Only now, with the principle completely gone, do we find out this company doesn’t even exist! If only I’d known, I could have checked with Tianyancha!

Adhered to the glass of the subway car window, the young woman receives terrible news through her phone. Reflected in that same glass are passengers with their own phones. With their large QR codes, the ads are designed for commuters with phones at hand. By inviting viewers to participate in the young woman’s nightmare of fraud, the ads make the mobile phone a tool for defense.

This is where the next ad series comes in. 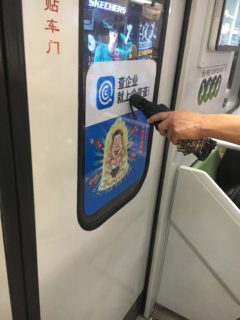 The supernatural promise of mobile apps

Through the magic of cartoon illustration, the second ad series projects a hyperbolic visual fantasy of heroically defending oneself in business dealings.

In the first, a grinning man crouches in a defensive martial arts stance. He holds a force field around himself. His bulging muscles burst his white button-down shirt to shreds. His ears are elongated like those of the Buddha: all-hearing, all-knowing. His force field repels arrows and daggers alike.

A man in his mid-forties intently examines the ad, a woman his own age with him. On this rainy day, he reaches out with his umbrella and points to the labels on the snapped arrows and bent daggers defeated by the app, reading them quietly to her: “Deadbeat borrowers. Fake backgrounds. ‘Leather briefcase’ (fly-by-night) companies. Illegal operations.”

The rest of the ad reads:

To check out a business,
get on Qichacha!
Qichacha helps you
resist business partner risk.

Both ad campaigns mobilize white-collar subjects’ ordinariness. While Tianyancha invites commuters to identify with the ordinariness of its cheated subjects as a warning, Qichacha depicts the entrepreneur busting out of his ordinariness/shirt through the power of the app.

Once my interlocutors bid for a project for a household-name US brand. The competition was fierce. By a stroke of luck, Director Meng was introduced to the director of the firm managing the project in China. They got on well, drinking and musing late into the night. Meng asked his new friend to put in a good word with the coworker who was to select a bidding company. According to Meng, his friend’s email to the coworker said, “I know this company, and I believe they would complete the work.”

This endorsement may seem underwhelming, but Meng was satisfied. In an entrepreneurial climate in which “resisting business partner risk” is so vital as to be depicted as a superpower, for Meng, the endorsement of his company as simply reliable was gratifying.

In another ad, a job applicant holding her resume bounds with superhuman strength through a field of pitfalls: “Pyramid schemes.” “Black-hearted bosses.” “Salary defaults.” Her hairstyle and the gesture of her hand recall the heroes of supernatural martial arts films. The rest reads:

To check out a business,
Get on Qichacha!
Qichacha helps you
avoid job search traps.

The job applicant appears serene. Only supernatural powers, it seems, can afford such confidence. What the app offers, then, is protection in an environment so fraught with pitfalls that defense against them feels practically magical.

Threat and protection in the Metro car

The interiors of Shanghai’s Metro cars are plastered with warning signs: “Caution: Gap.” “No Smoking.” “Mind your hands in the door.” “Please keep back from the door.” “Emergency door release.” The ads for Tianyancha and Qichacha form part of a built environment that surrounds commuters with reminders of threat and protection. 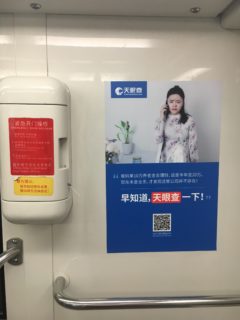 Passengers peer at the ads, ignore them, sleep near them, lean on them, use their mobile phones near them, and are mirrored in them during those minutes when the Metro car is a small orb of light hurtling through dark tunnels.

Although the ads do not evidence a decline in public morality, they do mediate a sense of moral loss in business dealings that my interlocutors grappled with in their entrepreneurial practice. The adds materialize it right on the walls of the Shanghai Metro.

But if the ads work, they work through the visually mediated production of identification and empathy. What could be more ethical than that?

Leksa Lee is an Assistant Professor Faculty Fellow at New York University Shanghai (which has a very good rating on Tianyancha). Her current book project is Modeling Business: Politics and Material in China’s Museum Industry.

Luzilda Carrillo Arciniega and Suraiya Jetha are contributing editors for the Association for Political and Legal Anthropology.