Among the central tenets of Pohnpeian social life is the concept/value/practice of kanengamah. Nothing about kanengamah is straightforward; indeed, when Pohnpeian storytellers and historians speak, they sometimes state quite explicitly that their words are “twisted.” In doing this they invoke one of the concept’s principles: Kanengamah is about concealment and constraint, about not revealing more than a limited portion of what one thinks or feels or knows. Rufino Mauricio, who died on Pohnpei on June 26, 2022, found himself in the challenging position of trying to do professional ethnographic and prehistoric research in his own society, where kanengamah mandated that to remain true to his own upbringing he was obligated to distort and hedge nearly everything he knew and reported on. It was no easy task.

Rufino was born in Pohnpei’s paramount chiefdom of Kiti on August 12, 1949, at a time when nearly all the Micronesian islands were part of the United States Trust Territory of the Pacific Islands. English-language education was minimal, but he excelled in local schools and went on to Jesuit-run Xavier High School in what is now Chuuk state.

He attended the City University of New York’s Brooklyn College and earned his BA at the University of Oregon. It was there that he began working with William Ayres on a lengthy series of archaeological projects on Pohnpei. Rufino earned his MA and PhD at Oregon, and his dissertation’s title expresses many of his lifelong interests: “Ideological Bases for Power and Leadership on Pohnpei, Micronesia: Perspectives from Archaeology and Oral History.” Among his earliest professional publications was “Peopling of Pohnpei Island: Migration, Dispersal, and Settlement Themes in Clan Narratives,” in which he emended assumptions about the mythological origins of Eastern Caroline Islands populations as they had been set out in an earlier paper by Ward Goodenough.

Rufino remained on Pohnpei and took a series of positions in historic preservation, teaching, and in multiple cabinet positions in the Federated States of Micronesia national government, Secretary of Education among them. He continued working actively as an archaeologist and prehistorian, publishing and providing guidance to anthropologists and archaeologists seeking to work on Pohnpei. His book Place Names of Pohnpei Island (2003) integrates a wealth of knowledge about the island his people have continuously inhabited for the past two thousand years.

Rufino taught me many things, big and small. One of the smallest things he taught me had one of the biggest impacts on the way I do anthropology. In a 1986 article, I analyzed business practices of the tiny, locally owned and operated trade stores that repeatedly opened, went bankrupt, and closed in Pohnpeian villages in the years following World War Two. My analysis focused on the proprietors’ lavish extension of credit, which seemed invariably to lead them to insolvency, and explained this pattern as a deliberate means of pursuing sociopolitical status. Business failure, I argued, wasn’t so much a sign of incompetence as it was a strategic extension of gift-giving activities entailed in the competitive feasting that characterizes Pohnpei’s political economy. I explained this behavior in what social scientists call “instrumental” terms, rather than as being simply the result of repetitive mistakes.

Rufino gently instructed me that there was more to all this. The habitual extension of credit to those entirely unlikely to repay it, something that characterized the practices of nearly all these would-be entrepreneurs, was, he reminded me, a clear manifestation of their sapan, that is, their “generosity” or “kindness.” As one well-versed in Western (Euro-American) patterns of method and theory, he thoroughly understood what I was arguing, and did not discount it. But he wanted to make sure I understood how the precepts of Pohnpeians’ value-systems—of behaving as fully socialized and mature adult humans should behave—shaped individuals’ actions at least as much as any calculations of self-benefit and ambition. I keep this lesson in mind whenever I’m fumbling around with explanations of why we humans behave in the ways we do.

A man with dark hair wears a patterned blue and white shirt and smiles broadly. 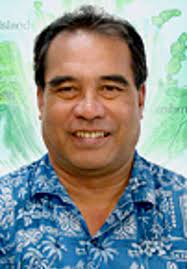