“Whoever Needs Food, We’ll Feed Them One Way or the Other”

Society for the Anthropology of Food and Nutrition

Public and private food aid in the midst of the COVID-19 pandemic provided relief to many, but should we be looking beyond food aid?

Don is tall and imposing with a booming, laid back voice, his eastern Kentucky drawl slow and charming. The first time we met was in 2018, while he was signing up for a fruit and vegetable walking program I was managing. A handful of nutrition students were with me, and Don was deeply concerned about what we would eat during our visit. The next day he showed up with overflowing bags of snacks and bottled water. During a 2020 interview when we were operating in the throes of the COVID-19 pandemic, he told me, “Whoever needs food, we’ll feed them one way or the other.” Don—whose only child was in her twenties—was acutely attuned to the social risks of COVID-19. Specifically, he was concerned with the disproportionate lack of food aid for households without children, like his own.

In this post, I describe two direct food aid programs that arose due to the COVID-19 pandemic. I draw attention to how government and corporate institutions value and invest in children over other groups, particularly older adults, in contrast to Don’s “whoever.” Furthermore, I illustrate how this eastern Kentucky community cared for those who were not (or did not live with) children. This work is based primarily on 32 in-depth semi-structured interviews collected in the Fall 2020.

At first glance, this was a community overrun with public and private food aid during the pandemic. Families with members under the age of 18, regardless of income, could sign up through a link provided by their teachers to receive a box of shelf stable food, shipped to their door, from Baylor University. On their website, Baylor describes the distribution of food boxes as “an innovate partnership between the Baylor University Collaborative on Hunger and Poverty, USDA, McLane Global, and PepsiCo….The initiative will serve nearly 5 million meals per week to rural children impacted by COVID-19-related school closure.” This language supports what social worker Graham Riches points out: “The focus [of food banks] is on the outputs: acquiring ever increasing volumes of surplus food, sorting and delivering it as quickly as possible and reporting the numbers of meals served and people fed. The causes and consequences of food insecurity are not high on the agenda.”

A warehouse is filled from wall to wall with numerous carboard boxes on pallets.
Credit: USDA Photo by Lance Cheung 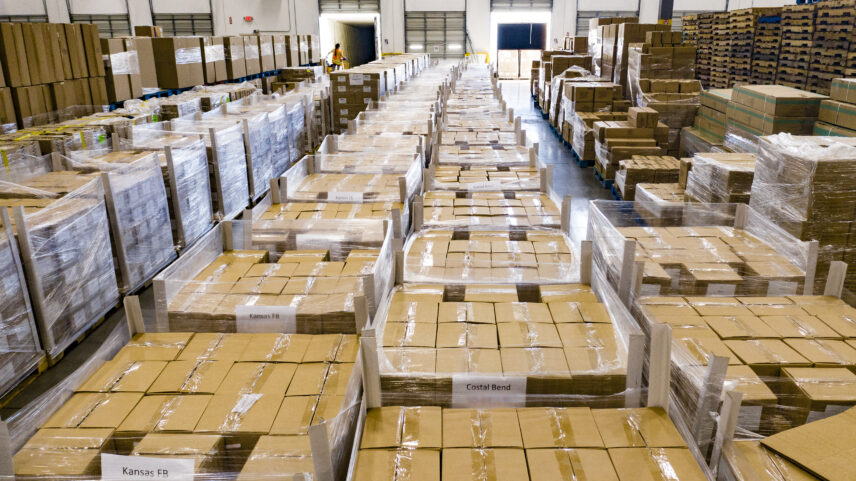 Baylor University, McLane Global, and PepsiCo aimed to deliver nearly 1,000,000 meals per week to students in a limited number of rural schools closed due to COVID-19 as part of the Collaborative on Hunger and Poverty.

Families received one box per school aged child. Forty-two-year-old Candace is a mother of two young teenagers and described the food they received in these boxes. “It was filled with non-perishable milk, juice boxes, healthy snacks like granola, and sometimes these little shortbread cookies that were really good and some canned food and cereal. So it was like breakfast and lunch yet we still have quite a bit of it. I don’t need to buy milk for at least another year or so.” While Candace stored the non-perishable milk for the future, she gave her sister, neighbors, and a local church food pantry extra canned foods and snacks. “But,” she told me “we still have a lot of it. We have two boxes we’ve not even opened yet.”

The second COVID-19 related food program in this county was managed by a local community center and distributed through a community kitchen. Each Tuesday, anyone with a school aged child regardless of income who registered could drive up, pop their trunk, and drive away with a box of fresh food per child. Funding for these food boxes came from the USDA Summer Food Service Program. Fifty-eight-year-old Camelia regularly picked up boxes for her grandchildren. “They got fresh vegetables,” she said, “fresh fruit, milk, bread, potatoes, macaroni and cheese, cereals, rice. Just a whole bunch of stuff. And a lot of it came from the farmers here, all the fresh vegetables come from our farmers.” I have previously published about the pride members of this community feel about being able to eat locally grown produce. Most recipients of the community kitchen food boxes praised the efforts at distributing fresh food as they navigated their children’s and partner’s picky eating, allergies, and their own concerns with consuming too many processed foods.

All in all, interview participants had more food available during the summer and early fall of 2020 than they did during pre-COVID years. Candace received both the Baylor shelf stable box and the community kitchen fresh box and told me “I would say we had more food than we usually do, and we were having to shop a lot less…I felt like we had more food than we normally would have. We still do.” Richard, a sixty-two-year-old grandfather, received a call from his son Jared early in the summer. Jared told Richard to go to the community kitchen every other week to pick up their fresh food boxes to keep for himself. Richard told me, “There was no reason in this county for kids to go hungry, I can tell you that if anything, they probably had too much food.”

While we can debate what it means to have too much food in a resource strapped, underfunded, and over-exploited region, instead I’d like to emphasize what a lot of interview participants did. All of these programs went to children. This articulates with Richard Robbins’s 2016 observation and theory of United States kinderculture, which is carefully constructed by political and economic elites to turn children into consumers. PepsiCo and McLane Global, who produce a wide range of processed goods from meals to crackers, were major funders of the shelf stable food boxes. It’s worth noting the manufacturing of brand recognition in early childhood is a way to produce long term customers. Additionally, the high-sugar, high-salt food products of Pepsi and McLane Global provide not only biological reactions through their heavily researched formulation, but a sense of comfort during unstable times.

The emphasis on children is also characteristic of approaches to development that link human and socioeconomic “progress” firmly together. Carol Worthman points out that societal investments in children are “routes to building human capital” which are expected to yield “returns” in the form of a healthy adult worker. Together with kinderculture, this may help to explain how those in political and economic power justify providing resources for children. They expect those children to grow into consumers and workers. This outlook of exclusively focusing on children, I would argue, devalues all members of society, as the children are not valued for who they are as children, but as who they are expected to become. Their adult counterparts, who they will most likely become, are often left to go it alone or depend on surplus, leftover foods. Graham Riches describes this as using “leftover food to feed left behind people.” Of course, we need to care for children, but just caring for children is not enough.

Twenty percent of the population in this county is over the age of 65. Transportation can be a major barrier for anyone to accessing services in rural areas. This is compounded by age. Interview participants shared that their elderly neighbors and family members often never learned to drive or no longer felt comfortable driving, so relied on them or someone else for their transportation. COVID-19 exacerbated these barriers, as those who could drive no longer felt comfortable being in an enclosed space with an elderly, vulnerable person they cared about.

While the direct food aid programs that came out of the COVID-19 crisis focused exclusively on children, the food made its way to other members of the community, particularly older adults. As mentioned earlier, Richard did not qualify for any food aid programs but received boxes of fresh food every other week since his son Jared was receiving too much food.

There is a tendency to be either sanguine or pessimistic in interpreting resource sharing, particularly within rural communities. Is this the organic development of mutual aid in a resource strapped community where neighbors are intimately familiar with who is most in need? Or is it the enrollment of everyday people into Riches’s “leftover food for left behind people” sentiment? I would argue that it’s both, or neither, or something in between. I return to what Don told me, “whoever needs food, we’ll feed them one way or the other.” One way many scholars and activists support would be through direct payments to maintain the dignity and agency of recipients and allow them to use the payments in the way they need—rather than the way someone else thinks they need. Direct payments could go so much farther than Candace’s and others’ boxes of unopened processed foods. The other way—sometimes the only way given the lack of support for basic social safety net programs—is through charitable donations that are picked through, picked over, shared, exchanged, and perhaps eventually eaten.

There is a real need for direct aid to all age groups regardless of income. While here I have mainly focused on age, income requirements for food aid (and other social services) also demand attention. For example, Erica told me, clearly speaking about herself “You have those households that are just barely on the line and those are the ones that gets overlooked. You have the super, super needy and everyone knows that they are very needy and they deserve the most. But then you have the ones that are just barely able to make it.” There is need for an increase in direct resources for all people, regardless of age, gender, race, or income, beyond the COVID-19 pandemic. When asked “do you think more direct resources are needed, even during non-pandemic times?” interview participants answered with one word, often repeated, “Absolutely.”

Annie Koempel is a Registered Dietitian with a masters in applied anthropology and the program manager for the University of Kentucky’s Superfund Research Center Community Engagement Core. She is also a PhD candidate in UK’s anthropology department. Her dissertation research explores disordered eating, metabolic health, and the food culture in eastern Kentucky.